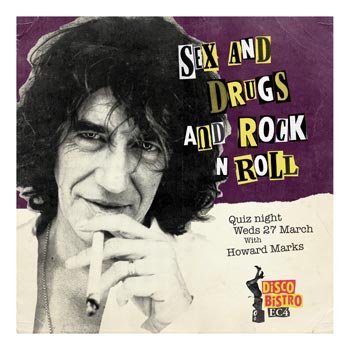 From former drug baron to best-selling author to DJ and crime novelist, Howard Marks aka Mr Nice, isn't short of a story or two to tell. So he'll make a particularly good host for Disco Bistro's upcoming 'Sex and drugs and rock 'n' roll' themed quiz night and dinner.

As chef Carl Clarke prepares a special menu which includes 'edible spliff' and an Italian American inspired rose veal parm (as made famous by The Sopranos) we thought we'd get Howard to tell us his favourite places to eat. Although in a spin-off from our usual 'My Hot Dinners' series where we stick with London (and given his fondness for international travel), we allowed Mr Nice to expand the brief a little.

"The Taverna lies on the shores of Lake Lugano opposite both the gleaming city of Lugano and the craggy majestic beauty of Mount Salvatore. The village in which it is situated, Campione d’Italia, an exquisite mixture of old and modern architecture, is in Italy but one cannot get to any other part of Italy without either travelling by boat or traversing a hefty chunk of Switzerland. On my first visit in 1973, an impeccably clad waiter ushered me to an al fresco table covered with gleaming glass, cutlery, and porcelain. A London taxi drew up outside the restaurant. A handsome, bespectacled fifty year old German came in accompanied by a garishly dressed Rastafarian, a rich cockney businessman, a Sophia Loren look-alike, and a blonde Teutonic beauty. I used the public telephone. It was Swiss. Outside, a fully uniformed Italian policeman sat in his car, which had Swiss number plates. Nearby was a casino built by Benito Mussolini.. Everyone seemed extremely wealthy. A well known “secret” tunnel connected the casino to the priest's house.

"Am I in Italy or Switzerland?" I asked the waiter.

"We accept both currencies, Sir. We accept all currencies and all credit cards. May I suggest you help yourself to the antipasto table?"

"But which country are we actually in?" I persisted.

In 1983, a convoy of Italian police crossed the lake, invaded the village, and arrested a bunch of Mafiosi. In 2003, I revisited . The same staff were gathered at the still flourishing Taverna. The same casino still raked in the money. Nothing had changed. Oh! The food: obviously the best Italian chefs can provide. Criminals are very discerning."

Find out more about La Taverna

"Pulling up alongside a heavily populated pavement, I was greeted by a waiter dressed in brand new clothes bringing a menu card for me to fill in. He would find me when my table was ready.

Din Tai Fung is the most famous restaurant in Taipei. There are dozens of cooks looking like surgeons, heaps of bamboo steamers, and great piles of pork and dough rolled and wrapped into its signature dish - the dumpling - thin and fresh, never soggy or doughy, and served immediately after it is steamed. The most popular is also the most basic, made with green onion, ginger, pork, soy sauce and sesame oil.

The floors and furniture were cleaner than any I have ever experienced, including those of top end private hospitals and clinics. The toilets were disinfected and cleaned after every use.

After taking my seat, I was politely but thoroughly instructed which dumpling went with which sauce and the order in which to eat them. The bright lights helped ensure a quick turnover. One comes here to eat, not for romance."

"A few miles from Bridgend, the epicentre of suicide cults, lies Pen-y-Fai, which comprises a lunatic asylum, sniffer dog training centre, prison, and stately home - Court Colman Manor. I used to pick conkers there when I was an infant. It houses the Bokhara, my favourite Indian restaurant in the world.

It's not just mine: it's won the award for the best curry restaurant in Wales several times and came in the UK top ten in the exhaustive Independent national survey of curry restaurants some years ago.

For a starter, choose banana koftah, for a main course ask for the Welsh lamb curry, in which the lamb has been prepared as if for Welsh traditional cawl then given the Indian treatment. Amazing!"

Find out more about Bokhara

A 'Sex and drugs and rock 'n' roll' themed quiz night and dinner takes place at Disco Bistro on Wednesday 27 March at 7.30pm.

Mariella Frostrup: "What I like about the menu is there's always something you fancy..."

Top food writer Claudia Roden: "I just love the way they cook and because they also do some of the meats and some of the cuts that aren't popular and that I love."