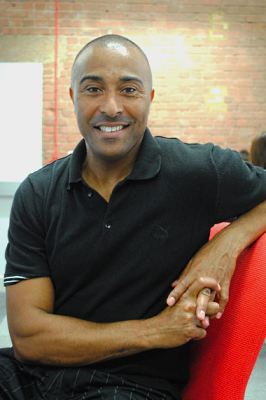 Colin Jackson is an Olympic medal winner, world record holder for the 60m hurdles, Strictly dancer and will be commenting on the 2012 Olympics. He's also, as Hot Dinners found out, an unbelievably nice guy. We jogged alongside Jackson and in-between gasping for oxygen, got him to tell us his favourite places to eat in London.

"I'm a lover of Asian food and I always look for Asian restaurants whether they're fusion or modern ones, so my top three will all be Asian."

"I love Nobu because of the really fine cuisine that you have there. I'm a person who doesn't mind spending money on good food. If the quality isn't good or I don't enjoy the service than I'd never go back. Nobu Berkeley is great and I enjoy the atmosphere there as well."

Find out more about Nobu Berkeley

"It is to me the most exquisite Chinese food you would ever eat. Unbelievable. I was lucky enough to go in and taste absolutely everything on the menu and that was a special moment in time for me! The signature dish I loved there was wasabi king prawns in a wasabi sauce and it was delicious."

Find out more about Kai

"I love it because it's a real fusion restaurant and it's somewhere where you share your food. You've got to have the Mexican doughnuts to finish off your meal - they're superb! But if you're worried about calories, I'd leave them alone."

Colin will be commentating on the Olympics for the BBC this summer. See the full list of BBC commentators for London 2012.