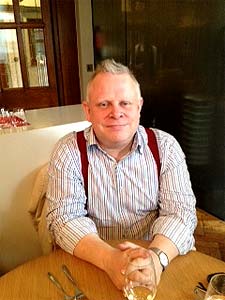 Richard Vines is Bloomberg's food critic, Chair of the UK & Ireland panel for the World's 50 Best Restaurants list and all round friend of the chefs. It wouldn't be over-the-top to say he seems to know everyone in London's restaurant world. We caught up with him just before this year's World's 50 list was announced and asked him to share with us his current favourite London restaurants.

"If I was going for gastronomy I'd go for the Ledbury because Brett Graham is such a passionate chef - the menu changes daily depending on what comes into the kitchen - he's technically accomplished but also creative."

Find out more about The Ledbury

Find out more about Dabbous

"I think Pollen Street Social has got better and better. When it opened Jason Atherton came with all these ideas of what he wanted to do and he tried them and some worked and some didn't. I went to lunch last week and it was one of the best meals I've had for a long, long time."