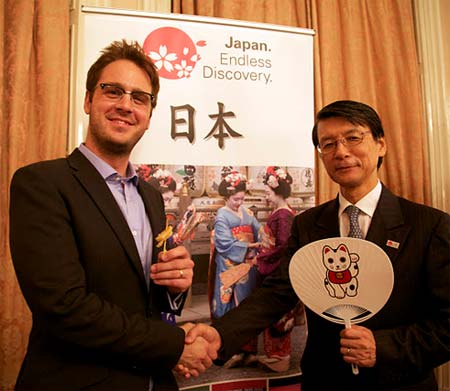 American chef Tim Anderson found fame in the UK when he won MasterChef in 2011. Since then, he left his old job at the Euston Tap to set out on his own. His first restaurant Nanban, focuses on Southern Japanese food - an area where Anderson (pictured on the right with the Japanese ambassador)-  lived for two years.

Nanban is opening this Spring and we caught up with Tim Anderson to find out more...

What can we expect on the menu at Nanban?

Ramen will be the centrepiece of our menu. We'll have four kinds to start off with, all of them tonkotsu (pork bone) based, representing styles from around southern Japan. So we'll have the basic tonkotsu with pork belly and marinated egg, from Fukuoka; a type with garlic oil and garlic chips from Kumamoto; a kind called chanpon from Nagasaki, which is topped with wok-fried veg and seafood; and an intense pork-chicken blend from Kagoshima.

I hope to have rotating special ramen as well, like extra-porky Kurume ramen and sōki soba from Okinawa, which features pork ribmeat braised in awamori, the local booze. We're also offering mini versions of all our ramen so that people can try a range of different foods without feeling bloated!

I should say that even though we are ramen-centric, we are not a ramen bar! Our other small and large dishes, all of which are designed to be shared, are just as important to the Nanban experience. Some of the dishes I expect to be hits will be yaki-curry, which is Japanese vegetable curry rice topped with molten cheese and a runny egg; chicken nanban, fried chicken doused with sweet vinegar and served with Japanese tartar sauce; and kake-ae, a dish of cured mackerel or sardines tossed with carrots and daikon in a tangy miso-sesame dressing.

All of these are foods from the south of Japan, and most of our menu will be, but we'll have a few of my own creations as well. It's important to me that Nanban maintains a distinctly southern identity, but I don't want to get so caught up worrying about being authentic or traditional that we don't do anything individualistic. That's not the izakaya way.

You've been showcasing your dishes at pop-ups - what kind of reaction have you had to them so far?

The pop-ups are a great learning experience – it only takes one service to figure out what works and what doesn't. The response has been really encouraging and the feedback has been really helpful.

Are there any more planned after your collaboration with Ozone on Valentine's Day?

I am planning to do more after Ozone but I need to find venues! I'm hoping to find places in north and south London to get a good geographic spread, since by now we've already done east and west.

We were intrigued by the idea of Japanese flavoured soft serve ice-cream...

Soft serve ice cream is simply called "soft cream" in Japan, and it's often made with flavors of local specialities when you travel from place to place. Usually it's just fruit or vegetable-based, but I have had one flavoured with sea urchin and one with seaweed. Both surprisingly tasty! We probably won't do anything quite that odd but some of the flavors you might expect from us will be plum wine, Okinawan black sugar, black sesame, yuzu-kosho, purple sweet potato and kinako, a flour made from toasted soybeans that kind of tastes like peanuts.

Obviously you know a lot about beer - can you tell us what alcohol we could expect to find in Nanban?

Drinking is a really important part of the izakaya experience. Fun fact: the word "izakaya" literally means "shop to stay and drink," and they originally started off as sake shops that served snacks! So Nanban is going to have awesome drinks, in keeping with that tradition. I may be even more excited about them than I am about the food.

Our two priorities will be beer and shochu because they're what match best with the food.

We're going to serve one Japanese lager in addition to our own house ale, which I'm currently developing with a tiny new brewery in Stoke Newington called Pressure Drop. All I'll say about it for now is that it's a sweet potato pale ale. We have a batch fermenting away right now and hopefully it will be ready for the pop-up at Ozone. If not, we'll have it at the next one.

Additionally we'll have a good selection of six to eight bottled beers, all domestic. I had originally hoped to import some beers from southern Japanese microbreweries, but they're just too expensive. The UK has absolutely amazing beers these days so there's hardly any need to look elsewhere. We'll have things to satisfy both geeks and casual drinkers.

Shochu is the spirit of southern Japan, usually distilled from sweet potatoes but also from rice, barley, and other grains or vegetables. We're going to have about eight shochu on offer, and we'll also serve chu-hi. Chu-hi is short for shochu highball, and essentially it's just shochu mixed with a flavored syrup, and topped up with soda. They're easy-drinking, dry, and refreshing.

They fuelled many glorious karaoke sessions when I lived in Japan, and hopefully they will fuel glorious nights out in London for our customers! But I should mention that shochu is actually weaker than spirits like vodka or whisky because it's usually either singly-distilled or simply diluted. Most shochu is in the 25-35% ABV range so you don't have to worry about getting too plastered on it. Unless you're me, and you drink it like water. I just love it.

To round out the drinks list we'll have a handful of sake, just a few wines (hopefully all English), Japanese and Scotch whiskies, all the usual spirits and mixers, and a few our own house cocktails. I just tested one on Friday which is absolutely delicious: rum, shochu, cola, yuzu-kosho syrup, and lime. I call it a Kyushu Libre. Softs will include barley tea, green tea, and roasted green tea, all served hot or cold.

And where will you be opening Nanban?

We have found a site and made an offer, and it's been accepted. I'm not going reveal the exact location just yet because I don't want to jinx it – there's still loads of paperwork and construction work to be done – but I will say it is on Shoreditch High Street. Which I am extremely pleased about.

It's on two floors and I reckon we'll be seating about 55-60 people. The place was most recently a shoe store, but oddly enough it has some design features that will work brilliantly for an izakaya, like two small vaults on the lower floor that will house semicircular booths. As much as possible, I want people to feel like they're in their own private space with their companions. That means careful lighting choices and as much booth seating as possible, all with high backs, to block out everything but your friends and your food.

And finally - do you have anything else planned?

There is already a Nanban cookbook in the pipeline!