[SIGPLUS_EXCEPTION_SOURCE] Image source is expected to be a full URL or a path relative to the image base folder specified in the back-end but /blog/2012/tramshed-story/gallery is neither a URL nor a relative path to an existing file or folder.
0
Shares

Mark Hix tells us all about Tramshed in Shoreditch 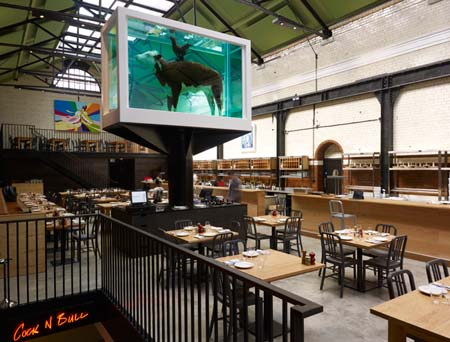 With Chef Mark Hix’s latest venture Tramshed finally here, Hot Dinners were invited for a behind-the-scenes look at the man in action just days before the restaurant's official opening to the public.

Climbing over furniture, boxes and squeezing our way past busy chefs and restaurant staff, we spy Mark standing underneath a Damien Hirst original piece, commissioned exclusively for Tramshed. A large formaldehyde-filled tank containing a cockerel standing on a cows back, lovingly entitled ‘Cock and Bull’. The scene is chaotic and Mark is in the middle of a photo shoot, so we get a swift tour of the new site which includes an art gallery, mezzanine dining space and kitchen library. Later on, we manage to catch up with Mark and hear all about his latest project.

Tell us all about Tramshed

I really wanted to open somewhere where the focus was a minimum choice menu, just like the popular Relais de Venise Entrecote style of restaurant. The menu is simple and the produce is the main star.

What’s on the menu?

There is just one starter which is a sharing platter with three different dishes on it. On right now we have mixed beets with mackerel and horseradish sauce, whipped cauliflower with Berkswell cheese and lastly, a take on the American ‘pop-over’ – a sort of Yorkshire pudding accompanied by chicken liver pate. The latter will remain on the menu throughout the year, whilst the other two items will change according to seasonality.

Main courses are straightforward; a whole chicken for two/three people to share or poussin for one and steak, in multiples of 250g cuts. Value is also important at Tramshed and a whole chicken won’t set you back more than £25.00. All mains are served with chips and there are two sides of a seasonal vegetable and also a salad and we even do takeaway!

There will also be three desserts: a seasonal dish, a cheesecake and pie – flavours of which will change according to the seasons and a cheese plate too. We are also going to introduce a chocolate fondue to the menu later on.

Sourcing has always been important to you. What makes your beef and chicken special?

I have sourced 'Mighty Marbled' beef exclusively for Tramshed which is created by Hannan Meats. It is from traditional breed cattle including Hereford, Angus, and Shorthorn and hand-selected entirely for its quality, texture and flavour. Good fat marbling is essential and the beef is aged for a minimum of 5 weeks and dry aged in the Himalayan Salt Chamber. The Himalayan Salt Chamber is a totally new concept in Europe. There are 4 already in existence, 2 in the USA, 1 in Canada, and 1 in Australia. Hannan's is the first in Europe.

The chicken for Tramshed comes from Woolley Park Farm, who have produced a ‘barn-ranged’ chicken that benefits from both indoor and outdoor life. They let the birds outside into the field during the day to reap the benefits of ranging the grassland and this makes for a better eating bird.

How long has the Tramshed project been in works?

We have been working on Tramshed for two years and have been faced with some problems that may potentially have stopped things from going ahead. The local residents did their best to fight our licensing and for a while, we only had permission to open until 10:30pm – which of course is no good to anyone. Thankfully we are now permitted to open until 12:30am, which is much more appropriate for a restaurant, especially in this area.

Tramshed has a dining room, mezzanine dining area, lounge bar, kitchen library and art gallery. It’s a big operation with lots of different components. The art gallery opens next week and will be a great showcase for well known artists, such as Damien Hirst as well as lesser known local artists. It will be equipped with wi-fi and although not a café, will serve coffee to those using it to study, work or simply enjoy the art. It’s a creative sanctuary.  We are going to work with local colleges to run competitions for students to win the ultimate prize of having their own gallery show with us.

Speaking of Damien Hirst, how did you manage to get ‘Cock and Bull’ commissioned?

Damien is a good friend and one day I was sitting in a meeting with the architects and we couldn’t seem to get our head around the design of the dining room space. I sent Damien a text and asked if he fancied doing something for the new restaurant. Not long after, he sent through details of what he’d like to do and the actual lay out of his piece determined the design of the entire dining room space.

The Kitchen Library is also new and houses your own amazing cookery book collection, what are your plans for this space?

I have a mini kitchen which is where I’ll be holding cookery classes, private dinners and doing research and testing with my chefs. It’s a great space and it’s the new home to all of my cookbooks, thankfully. I have quite a few but my favourite ones are the rather special old books like ‘A handbook of gastronomy’ – written in 1884 by Brillat Savarin as well as the old Alexis Sawyer books.

What is the best and worst thing about being your own boss?

The best thing is that I get to make all the decisions, I am my own CEO and Creative Director and oversee everything with the help of my PA and mobile phone and I work on the move. The worst thing about being my own boss is making the wrong decisions.

Where do you like to eat when you have down time?

3am Chinese meals at Hung’s in Soho are not uncommon, but I do like Duck Soup Soho and also the Vietnamese restaurants on Kingsland Road. It is important to get about and about and see what is happening in town. I once went down to Dorset to my own Oyster and Fish House restaurant in Lyme Regis and I had arranged to meet a group of my friends there for dinner. I hadn’t made a booking and when we arrived, they just couldn’t accommodate us! It was funny, but that’s life and we had to eat elsewhere.

What is next on your list? Any more openings in the pipeline?

Truthfully, no. I am very much focused on Tramshed and ensuring all elements of it are a success and run as smoothly as possible. Although, we are doing some fun ‘Hix Fish Dogs’ at the next Alex James festival (formerly known as ‘Harvest’) and that’s something fun and very different.