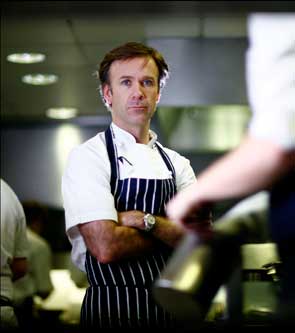 ‘Dazzling’, ‘Brilliant’, ‘Awesome’ are just some of the words of praise Michelin-starred chef Marcus Wareing’s cooking has elicited from Britain’s restaurant reviewers this year. It’s been just 12 months since the Lancashire-born chef broke away from Gordon Ramsay Holdings to open the first restaurant to bear his name – Marcus Wareing at The Berkeley; a year which has been marked by numerous awards. On the evening of the 2009 – 2010 AA Hospitality Awards in which Wareing was given the honour of Chef’s Chef of the Year – one voted for by the thousands of chefs whose restaurants feature in the Guide, Hot Dinners caught up with Marcus to discuss awards, ambition and that spat with Gordon Ramsay.

It’s been a tumultuous year for you – marked by all these awards. How do you feel about the AA Award?

It’s quite special because your peers have voted for you and because I have managed to split away from Gordon, continue on my own and still be as successful as I was with and without him. So it’s the icing on the cake for me.

When you opened Marcus Wareing at The Berkeley, how important was it that it was your name over the door?

Very, if I’m going to be totally honest. It was always my long term ambition and I’ve pretty much thought from Day One, when I got into whites many years ago, that I wanted to run my own restaurant and be in control of my own destiny. I didn’t know how I was going to achieve that, but it was always one of those dreams. One of my biggest fears in life was getting to the end of my life and never achieving the goals I’d set myself.

So how did it feel on the first day you opened?

It was a very special day -  it was a sense of achievement. I wasn’t nervous about anything because running Marcus Wareing at the Berkeley and running Petrus was one and the same for me. I created Petrus, the brand, the style, the whole thing of how the place looked and felt. All I’d done was just carry it forward under my own name.

Was your vision for the Berkeley in any way different to that of Petrus?

No. What there is here is a sense of happiness and a sense that I am where I want to be personally. It makes me think and look at the work and the job in a different way. I feel that I’ve become more creative. I’ve started to get back into food and enjoy my cookery more than trying to fight with some people. When you’re trying to have the split, you find your thoughts probably concentrating more on that than the food - that’s what it was like in the latter years of Petrus. The eight or nine hours a day I was actually doing service – that was my escape, I was able to concentrate on food. But outside of service, you’ve got the real pressure of this battle that’s going on behind the scenes.

Do you have any regrets over the interview you gave to Waitrose Food Illustrated in which you said you wouldn’t give a f*** if you never spoke to Gordon Ramsay again?

No, I told the truth

But you later told The Times you’d picked a fight to engineer the break.

I didn’t engineer the argument – the arguments happened. Just as time went on it was always going to come to a head somewhere down the line. I suppose what I said to [the Times] was that I picked a fight. I’d really had enough of the way things were moving forward. I wouldn’t say I engineered anything. Two big egos like Gordon and myself were always going to have a battle somewhere down the line.

Have you been in the same room as Gordon since then?

No. You have to bear in mind, that when I did those interviews, such as the Waitrose one, you do them with a bitter pill in your mouth and a bitter flavour. So your discussion and point of conversation can be quite negative. That’s the opposite now. A year down the line and I’ve got no issues with Gordon. I’ll be really honest, I wouldn’t be in the boat I’m in today if it wasn’t for him and I feel a huge amount of respect for him as a chef and a businessman. It was just our time to part company. I wish him the best of luck. Neither of us owe the other anything. We’re all square. 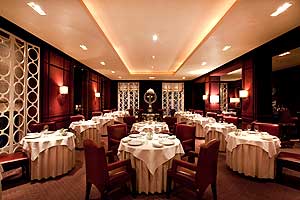 What’s the dining experience you aim to give guests at Marcus Wareing at The Berkeley?

I’d say the experience is of a one-of-a-kind restaurant. When you’re in a big company like [Gordon Ramsay Holdings] you find people in and out of your kitchen and you see your food in other people’s kitchens through the company. Now, I’m pretty much on my own and one of the most important things about dining here is that I’m here. People see your name above the door and they expect to see you in the restaurant, albeit that’s not one of the things that happens in today’s cookery. But you come to Marcus Wareing at the Berkeley and a good nine and half times out of ten I’m going to be here. I think that, for a fine dining experience is crucial for my customers.

Does that mean you’re not thinking of opening other restaurants?

I would and I am. Working in an environment like GRH I saw the value of someone like Gordon setting up other restaurants with good quality people and not having to be overly involved. My point is that whatever other restaurant I do, other than Marcus Wareing at the Berkeley, will consist of other people doing it on my behalf. I will only ever cook in one house. I will not spread myself to the point where I’m spread between two restaurants, or three or four.  I will be cooking here and having key people running operations down the line. I think that transparency with the general public, my clients, is to set the tone from day one, rather than trying to say I’m here, there and everywhere because I don’t think people buy into that anymore.

So you are looking at other restaurants?

Does that mean ‘Watch this space’?

Well, not for a long time yet. I’m only a year here. We all have pipe dreams; whether they turn into reality or not is another thing. I’ll be honest with you – it’s not my long-held ambition to have lots of restaurants. I’m more than happy with what I’ve got and if I never have another restaurant I’ll have achieved a lot to get to this stage in my life and career.

Your wife runs the office at Marcus Wareing at The Berkeley, doesn’t she?

My wife used to work for Marriott hotels so she’s very much into the importance of client care and contact. I’m very fortunate to have her on board and involved in that way and she’s put a fabulous team together.  There are so many email requests we have to deal with and bookings that involve special occasions or diets – they all need dealing with. People know they’re coming to a fine dining restaurant and want this special service, so there are a lot of demands on the restaurant and it’s very important that we deliver that. We try out utmost to deliver whatever the customer requests.

Are you an optimistic that we’ve seen out the worst of the recession?

I’m very fortunate – I don’t have a problem with bookings. I’ve built such a strong business over the years, sometimes word of mouth is the best way to sell your restaurant. That, serving great food and being here in the restaurant. We do get a lot of good spending going on, but it tends to be more private money than corporate money. 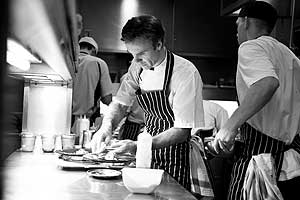 You admit you’re a competitive man – does that mean you’re attentive to how your work is perceived on an international level?

I’m very aware of it and very much want to be part of it. I want people, when they come to London, to make this restaurant one of their destinations. To be recognised on a global platform is an honour and a privilege. So yes, I’m very competitive. What you can’t afford to do is make it an obsession. You’ve just got to enjoy what you do and hope that you’ll become that person and the restaurant will become that quality. And I don’t think that’s something you can achieve in a couple of years. It’s something you achieve in a career.

You just missed hitting the Top 50 in this year’s San Pellegrino World's 50 Best Restaurants. Are you confident you’ll break into that next year?

We won the breakthrough award which means we’ve broken through from nowhere. I think to get to number 52 when the restaurant hadn’t even been opened a year was great. I never got recognised by that award for Petrus because it was part of a company. I think as soon as you stand alone people start to sit up and take note. Yes, I’m confident – I’d like to be in the Top 50 because it’s an amazing recognition. And I must say that I went to the awards for the first time last year and it’s a real restaurateurs’ award. It was full of passionate people who love running restaurants. It wasn’t full of celebrities and it wasn’t full of TV chefs either. That’s where I wanted to be. It was a big eye-opener for me, that award ceremony.

Where do you go to eat in London when you’re not working?

I generally go simple in London. I haven’t really had much time in the last 12 months – I’ve not eaten in any of the new London restaurants. I tend to go to the places I know I can get the simplest of service in and get what I’m really looking for. So I go to Scott’s, J Sheekeys, Wild Honey – places where there’s no fuss. If I’m going gastronomic...I haven’t done it for such a long time, I wouldn’t know!

You live in South London – what about local restaurants there?

I can’t split between Trinity and Chez Bruce. They’re my locals and I feel very privileged – I love them both, they’re amazing restaurants.

Are you doing anything special for the London Restaurant Festival?

One of the festival’s hottest tickets is Pierre Koffman recreating Tante Claire on the roof of Selfridges. [Wareing has gone on record previously saying how unhappy he was working at Tante Claire earlier in his career] Would you be interested in going to that?

If I could I probably would. It would be good to see Pierre cooking again – the guy’s obviously a legend and is very much missed in the industry. But if I was him, I’d just enjoy retirement and put my feet up. He deserves a break. Why he’s doing this and coming back, I don’t know. I hope he’s got a good team around him.

Read more about Marcus Wareing at the Berkeley.