From Le Caprice to Hix: In the kitchen with chef Kevin Gratton 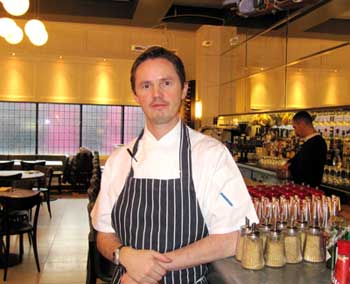 Head Chef at Hix since it opened in May 2009, Kevin Gratton first teamed up with Mark Hix at Caprice Holdings (Le Caprice, Scott’s, Sheekey’s) where he began as chef de partie at Le Caprice, before becoming head chef there and then heading up the kitchens at Scott’s when it opened.

Hot Dinners grabbed him out of the kitchen for five minutes to have a chat about working with the inspirational Hix and to find out what this talented chef sees restaurant food going in 2010.

So how did Mark lure you away from Caprice Holdings?

After doing Scott’s, which was a fantastic opening, I spent a year with Caprice Holdings working alongside Soho House. I bumped into Mark one day and he told me he’d got this opportunity coming up. I was enjoying my role as an executive chef in a big company, but felt that I wanted to put an apron on and get back into a kitchen. I also liked the idea of working with Mark again in a smaller company, really getting back into food.

How much of what’s on the menu here at Hix is you and what’s Mark’s input?

I think Mark’s a creative genius. And I don’t mean that in the sense that he invents anything new, because it’s British and  it’s seasonal. It’s not necessarily traditional, just really interesting British stuff – ingredients which a lot of chefs haven’t even heard of or sourced. Mark’s got this brilliant ability of sourcing great ingredients from farms which convert really naturally into a great dish.

Does that mean you have a working shorthand?

Because of my previous life with Mark I understand what he wants – it’s a really close and natural working relationship.

Since day one, Mark’s never put an apron on and been in the kitchen; he hasn’t needed to. We talk on the phone, fire a quick email off and I know what he’s looking for and vice versa he can trust me to write the menu. We change it twice a day; he knows what I put on will be in keeping with what we should be doing and what we want for Hix.  He’s really relaxed – he’s not the sort of chef who runs around in a mad panic and screams and shouts. You just want to work with him and the kind of dishes he comes up with and the style of food he wants to produce.

Everyone’s talking about what we can expect from British food in the next decade. What are your thoughts?

Well everyone talks about this British renaissance and I think a lot of people jump on the bandwagon and say they’re doing modern British - it’s like Gastropubs were eight or nine years ago and it’s getting a bit boring. But there are always people who’ll stand out from the crowd and I think Mark’s one of those people who’ll be at the forefront of anything happening.

One thing that will probably come up is small plates and snacky type things – I hate to use the word British tapas, but tapas can be done with any type of cuisine. It’s about applying your thought process to making dishes that are for sharing and that are small and interesting and not too heavy.  The kind of thing where you can have six or eight plates - that’s what we’re doing downstairs in the bar. We call it snacks, and we change that menu twice a day as well. Sometimes it’s in keeping with the a la carte upstairs, but we also put on a Welsh rarebit fondue yesterday, we had beautiful skewers with cheesy croutons and we used Hix oyster ale to make the fondue mix with. It’s lovely to sit downstairs in the bar and have that sort of thing.

I also think all-day dining is going to come to the fore. In London especially, you don’t want to feel restricted. Say you’re walking down Regent Street after doing a spot of shopping, you see it’s 3-o’clock and you’ve missed lunch – you ought to be able to walk into a dining room and have a full a-la-carte menu.

I think counter dining’s also going to be really popular. In the weeks leading up to Christmas, the counter downstairs here was packed every day. That’s how I see things building for the next year.

So what are your favourite places to eat in London?

Where we are now in Soho is becoming really foodie – there’s Barrafina, Bocca Di Lupo, Russell Norman’s (Polpo) round the corner – Fergus is coming, the Wright Bros have something on the horizon. It’s a colourful part of town, but it’s great to be here and know there’s somewhere great to eat.  I always like to have something I haven’t had before – new dishes, quirky dishes.

Read what the critics have said about Hix.