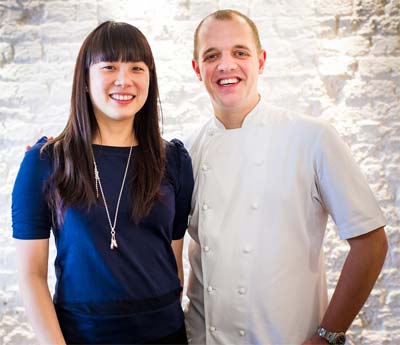 Noho is fast becoming one of the most exciting place to eat in London. First we had Dabbous which quickly became the hardest place to book a table after wall-to-wall great reviews. Next up we have Bubbledogs and Kitchen Table being opened by former Ledbury Sous Chef James Knappett and his sommelier wife Sandia Chang.

After hearing the news that Knappett and Chang were setting up shop on their own on Charlotte Street, Hot Dinners grabbed James for a quick chat to find out a little more about the new restaurants.

You must be thrilled by the reaction to your news...

Me and Sandia are overwhelmed by the support. To have everyone say they can't wait - we've been really happy with it. It's shocked us a little bit - but we've got to deliver on that. But it wouldn't be a challenge without pressure.

How long has this been in the planning?

For me and Sandia - a long time. It's always been a dream, but this year it was 'just go for it' you know?

It's seems a bit surprising how fast you left The Ledbury. You only joined them late last year.

It wasn't intentional. When I spoke with Brett he knew my long-term plans and was very understanding. So I joined The Ledbury and it was one of those everything happens at once things - fate had it that the site came up. But Brett's very supportive - he knew that was what I wanted to do. If this site hadn't come along for another year I'd have still been there.

Was it always the plan for you and Sandia to go into business together?

Well we met at Per Se and we worked together there. We got married and, with what she does and I do, we always had a plan to open our own place. The style of what it's going to be has just developed over time. Sandia's inspiration was that she always wanted to do something different - why should champagne be only for a special occasion? Why not make it like having a beer and a hotdog and then make hotdogs fun and different as well.

Our backers proposed the site to us and we could see it working straight off. It was just what we were looking for. It used to be an estate agents and now it's a shell.

So how will the place work?

Kitchen Table will be in a separate room - when you come in you'll have Bubbledogs which is going to be a very relaxed feel, quite rustic and then when you go through into Kitchen Table it'll be a bit more restaurant-like, a little more plush with the table around the kitchen.

I've cooked in nice restaurants, but you're generally downstairs cooking and you don't see the guests. When I worked at Noma where you deliver a lot of the courses to the table and get to speak to people - it felt a lot more personal. Guests would tell you how they were feeling about the dish and it was more clear that you were cooking for people. My perfect job would be cooking for these numbers right in front of me. We ate at Brooklyn Fare and I was like "Bloody hell, this is exactly what I want to do!"

Tell us about the blackboard you're going to feature in Kitchen Table.

I love doodling and in all of my recipe books and idea books I start with a drawing of the basic ingredient. I then look at how you'd build a dish around that and start drawing it - I thought it would be nice for people to see what I was doing. So if you came into dinner and the next ingredient to hit the scene was asparagus you could see what I'm working on next and get an interest and then think you'd like to come back and try that.

So you're bringing them into the process?

I want to let people know what I'm doing and it'll work for me as well. So, if I'm on the phone with the supplier and he tells me he's got some great sea kale, I'll write it down on the board. It's basically like me having my recipes books and doodles up on a big wall where everyone can see what I'm doing and thinking.

How many people will you have working with you?

I should imagine I'll have about nine chefs in my brigade to start with and the chefs will rotate around between Bubbledogs and Kitchen Table. And then fingers crossed it's a success and I'll have to find some more. Sandia will be running front of house.

We know you're doing around three to five courses at lunch - but how many were you thinking of for dinner?

We'll start in with twelve but they could be smaller courses going up to fifteen - maybe a few more.

So it's a one sitting place?

Back to the hotdogs - we hear you're bringing in guest chefs to do the odd dog for you. Any you can tell us about?

A very good friend of mine - James Lowe (of the Young Turks) will be the first to kick it off. Me and James have been friends for a while and I've spoken to him and he's super excited about it - so we'll kick off with the Lowe Dog.

Any idea what'll be in it?

I wish I knew - if you know James I'll probably get it the day before!