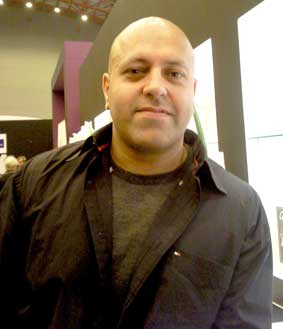 Derbyshire-born Sat Bains admits he went to catering school to meet girls. He was part of the team behind the opening of Raymond Blanc's Le Petit Blanc, won the Roux scholarship in 1999 and in 2002 opened the Restaurant Sat Bains at Nottingham's Hotel de Clos in 2002. One year later he had his first Michelin star. In 2007 the AA guide named it Restaurant of the Year for England.

Hot Dinners caught up with Nottingham chef Sat Bains at this year’s Restaurant Show to find out how London compares food-wise with his neck of the woods and which chefs he currently rates.

Did you catch the Ferran Adria talk?

No – because  I couldn’t understand him. It’s also lost in translation. I know Ferran, I’ve been to El Bulli a couple of times and it was unbelievable. It was a big catalyst for me when I ate there in 1999 – it changed the way I thought about food. But you need to hear it from his heart – it gets diluted in translation.

Where do you stand on the debate that if a chef’s name is over the door, should he always be in the kitchen?

It’s a mixture of both. I’m fortunate that I’ve done the business around myself. We’re closed two days a week, which means I’m off then and when I’m working, I’m there. I’m not going to lie and say I’m there always – I’ve got a brilliant team, if you don’t give these guys a chance they’ll leave you. So who’s right and who’s wrong? As long as the customer gets what they came for, that’s the package.

I’m just concentrating on giving customers the wow factor and that’s it. The good thing about the credit crunch is that you have to give more for your pound. So what we do is we’re solid in the kitchen; we’re trying to make sure the customers have a fantastic experience and we try and give them something they can’t get anywhere else.

Do you have any current favourite London restaurants?

I think the best meal I had in London this year was at Angela Hartnett’s, The food was fantastic and the wine pairing they did with it was incredible. I’m a massive believer that you should pay for good wine, so we spent the same amount on wine as we did on the food. I think London is a great city and I love it and one of my great haunts is the St Pancras champagne bar. Because coming from Nottingham, that’s our first stop.

Well, London is quite lazy sometimes. Because there’s such a concentration of customers, the food isn’t as exciting as it can be. So I think I’ve actually eaten better out of London – my favourite meal this year was at L’Enclume in Cartmel. It’s exciting and different but you also taste a bit of the character of the chef. And that’s what it’s about for me – it can be quite blasé in London sometimes.

Do you think you’ll ever be enticed to work here?

I learnt years ago to never say never. But London doesn’t appeal to me at the moment. I’ve got my work cut out for me in Nottingham just to keep standards and sustain the credibility of the restaurant. But what’s good is I have a very open format, where it’s called a blank canvas. So every service is blank. We have to achieve recognition every night, not on the back of recognition that was given to us a year ago. So it’s almost like saying it doesn’t matter how many accolades you have, the customers that are in tonight – they’re the ones that count.