Over a decade, Simon Rogan built his Cumbrian restaurant L’Enclume into one of a handful of restaurants around the country that foodies would travel great lengths to eat at. His innovative approach to cooking, marrying ground-breaking techniques with obsessional detail to food sourcing, (culminating in his taking on a six hectare farm) has won him plaudits from critics and rosettes and stars aplenty from the AA and Michelin.

But, and we say this as lazy Londoners, Cartmel is really a long way to go for dinner.  So we’re pretty happy that the Southampton-born chef is moving southwards, testing the waters with a two-year lease on a property on Blandford Street he’s calling Roganic. Rogan himself won’t be in charge – that’s down to head chef Ben Spalding (previously at L’Autre Pied and Rhodes W1) who’s making the move from Cumbria.

Hot Dinners caught up with Rogan to find out his plans for the Marylebone restaurant and to see if this means he’s had enough of country life.

We’re excited you’re opening up in London, but what’s this about Roganic being a pop-up?

It is a pop-up. I know there’s been some controversy on how long a pop-up is allowed to be a pop-up. But the fact of the matter is it’s going to be there and then will be gone after two years. In the catering industry two years is very quick, so as far as I’m concerned it’s a pop-up.

Does the temporary nature of the site make a difference to how the place will look?

It’s the back end of a lease, so we don’t want to spend massive amounts of money on it. So it’s not about the fine drapery or the interior design. Yes it’s going to be pleasant, but it’s about what goes on the plate and what goes on the table. We’re hoping people will look past the fact that the loos aren’t big but then it’s only got 25 covers.

We had heard it was going to be like Joel Robuchon where everyone sits up around a counter.

No, that’s a concept I like, but we were thinking about that before Blandford St. We’ve got a small space to play with so it’s all about getting those 30 covers full up for lunch and dinner.

We’re trying to give really good value for money - something different which London may not have seen before. We’ll have very natural food along the same lines as L’Enclume, using organic produce. But Ben, the head chef’s got a bigger net to catch from so he’s got the whole of the UK to play with, whereas L’Enclume only uses products from the North West. It’s going to be a great place I hope.

Will you be bringing down any food to London from your own farm?

A few things... all the things that cost a great deal of money down here. We have an abundance of flowers that we use in our cookery, various herbs that you probably wouldn’t be able to get here, so there will be certain things, but it’s a bit hypocritical to have an organic farm, soon to be biodynamic and then ship all our stuff 300 miles away. It doesn’t really sit very well with me. L’Enclume’s a monster so it takes most of the produce anyway.

We have built up our network of suppliers over the years. L’Enclume has around 200 suppliers, all Artisan who specialise in their own field. A lot of our meat will come from Cumbria because I believe it’s as good as anywhere.

Roganic, we understand, won’t have an a-la-carte, just tasting menus. Is that right?

We prefer not to call them tasting menus because I hate the stereotypical tasting menu where it’s a set format. You start with a soup, then you go to a foie gras and it’s just a gradual build up of proteins and everyone seems to follow that format.

...we want a piece of the action (in London). It’s the greatest city in the world.

Hopefully [our menus] are a collection of dishes that when you leave the restaurant you’re fulfilled enough to think you’ve eaten a three course meal. The menu’s going to change quite often to keep it fresh and interesting for people who want to come back. Once people know what they’re coming to and that there isn’t going to be any choice, then that won’t be a problem. L’Enclume used to have an a-la-carte and a table d’hote as well as different tasting menus – we’ve just got two now because everyone goes for the big one. Everyone wants the experience. I’m hoping it’s going to be the same in London.

Why here and why now?

Penny, my partner, she’s had enough of Cumbrian life. She wants to move back to London and ultimately I probably will as well, but L’Enclume is my prime focus. There’s a bit of unfinished business there that I need to attend to. So the best way to get Penny her London life is to open a business. Sounds a bit drastic, but that’s what we decided to do. Plus, we want a piece of the action down here. It’s the greatest city in the world.

Did you ever feel that in being so far from London, you ended up not being on the critics’ radar?

We’ve been fortunate enough where we’ve had good PR working for us, so we’ve had our fair share of press. But even with the accolades we get and the better we get, it’s tougher in the provinces; especially 250 miles away. You do feel that you don’t get the recognition you deserve. So we’re making it a lot easier for all those lazy arses down [in London] that haven’t visited us and got the whole experience! They’re going to get a bit of the experience, but you’re still going to have to come to L’Enclume for the whole thing.

...hopefully a bloody good meal in Marylebone will get people to go up to Cumbria and sample what we do up there.

Ben has his perameters, he’s allowed to put his own twist on things. It will be different, but hopefully a bloody good meal in Marylebone will get people to go up to Cumbria and sample what we do up there.

You mentioned value for money – what price are the menus?

We’re going for £80 for 10 courses, but that includes extras as well. For lunch we’ll do a five course for £40 as well as the 10 course menu. I’m hoping that any pessimistic people who don’t like tasting menu eating will be transformed when they see it done our way.

Are you pitching the restaurant experience any differently for Londoners?

I think time is money and there’ll be people who want to eat quickly and get out and be doing their stuff. At L’Enclume we’ve got you for the whole night. So in London we’ll need to be on the ball. But a table is a table for however you want to eat your dinner. The food style’s going to be very natural, lots of vegetables cooked very naturally. It’s going to be different to all those protein-rich meals you see so much of. Very healthy.

For a lot of people, the first time they saw L’Enclume would have been on television in The Trip. Did the programme make a difference to your business?

I don’t know. We’re extremely busy and we were very busy around that time. We don’t ask customers where they heard of us, but it must have had some kind of impact. We had a fantastic year last year accolade-wise, so it’s hard to pinpoint if that really made a difference. For us on the food front, we didn’t think it would do much for us. But what it did succeed in doing was showing how beautiful the area is. The food thing could have completely blown up in our faces – two comedians who know nothing about food, ad-libbing. They could have absolutely slaughtered us. There was a bit of risk. Luckily they didn’t too much.

Did you get an advance copy of the show?

No, and I didn’t watch it. I made other people watch it for me first. Now the restaurants involved  are trying to organise a Trip tour to incorporate all the places that were in the film. It’s not really our thing – but I think we will do it, because relations between us all have really improved since doing it. Before they weren’t great... Lake District politics.

We always like to ask – what’s the best meal you’ve had in London recently?

Last week at Pollen Street. Jason’s a good mate and he’s had his ups and downs but I thought it was brilliant. It’s an amazing place and I hope he does really, really well. 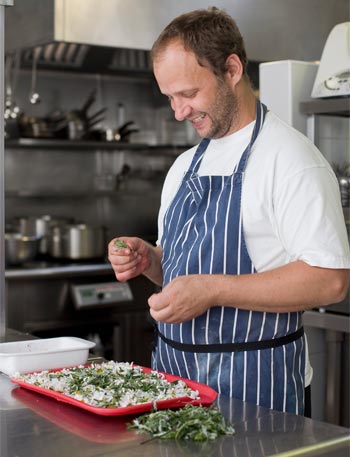 You’re obviously going to be in London for the opening of Roganic, but how long are you going to be down here for after that?

That's the million dollar question. I'll give as much of my time as is needed to make the project a success. Obviously I don’t want to say here’s the keys and run off back to Cartmel and hope that everything’s OK. I have a brilliant team there, so I’m able to do what I’m doing because of them – you’re only as good as the team behind you – hopefully I can go between the two.

If Roganic is a roaring success  - what then?

There is a possibility of extending the lease. We start our search now – I’ve looked at a place today – for two year’s time. [Roganic] will go somewhere – which contradicts the pop-up underground feel that it’s only here for two years, but it’s only in that place for two years. We’re committed to finding somewhere to move it to.

And will you move down here yourself?

Probably. Yes, because my friends and family are here. I’ve been away now from London for 11 or 12 years, so ultimately yes. But there’s unfinished business and things I need to achieve up in Cartmel before I make that move. I’ve put too much into there to walk away and couldn’t do it if I wanted to.

Read our Test Drive of Roganic