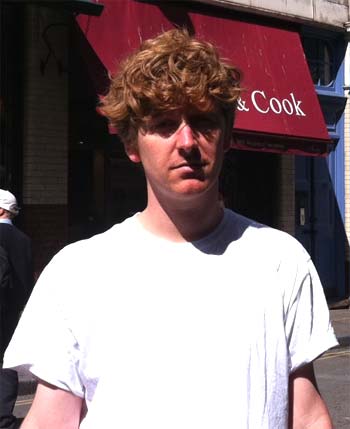 Brett moved to London from Australia on a whim in 2005 and has been here ever since. He first opened a cafe Elliot’s on Bethnal Green Road where he met Rob Green, his business partner who he then opened the Pavilion cafe on Victoria Park in 2007. Their new restaurant on Stoney Street by Borough Market is called Elliot’s which he says ‘is an evolution of all our previous ideas’.

So what’s the premise behind Elliot’s?

The whole concept of this is very much about its location - it's in Borough Market and we don't think there's a restaurant or cafe there that only delivers what's in the market. We're only going to be using suppliers from the market.  We want to reflect what you see on sale here.

So as people go round the market and see peas, salt marsh lamb whatever's plentiful at that time - they'll come to us and see that represented on the menu.  So we'll look at the season, look at the market, talk to the traders and stick it on the menu.

How often do you think you'll be changing the menus?

Well, there's no way in the world that you can change the whole menu daily. But that said, the menu will probably not be the same from day to day.  So if mackerel's not around we’ll change that element of the dish to sardines, so it's a constantly evolving menu.

What came first? Did you find this spot or was Borough always where you wanted to be?

Rob, who's one of Elliot’s owners, has a tea stall on Borough market for about eight years. Rob's always been actively involved in Borough and trying to promote it and push the market forward.  I think that when this site came up they wanted to encourage someone who was on the market to take it. They didn't want to bring in an outsider or another brand or company that would just capitalise on the space and the work done by the market.  They wanted to bring in someone from the market who could put something good there.

Was it easy to persuade them to pick you?

It was very much a pitch.  We had to come up with an idea - our concept is and always has been very clearly about sourcing all your produce from the market and being the unofficial market cafe/restaurant.  It's not about taking the easy route by saying you'll just use ginger pig or Turnips - it's about using the small people as well and trying to find the unique and interesting things.

So in Borough market, you can easily use Ginger Pig and Brindisa as they are wholesale companies.  They're amazing so we're definitely going to use them but it's about taking the extra effort to go and find others.  There’s a guy who brings up fish from Sussex only on Fridays and Saturdays.  So he goes out in the morning, catches the fish and brings it to market.  He doesn't deliver to restaurants so it's about finding those smaller and niche producers.

The market’s open all day – will that be the same for the restaurant?

It’ll be open for breakfast, lunch and dinner, Monday to Saturday, and just brunch on Sunday. Mondays to Saturdays we'll open at 7 for breakfast and we'll never close.  Even between 4 and 6 when the kitchen is getting ready for the dinner service, we'll still be offering up cold plates - cured meats, cheeses, maybe a salad o two. You can always come in and have a glass of wine or a coffee - it's all about being totally accessible.

There will be about 50. There’s a communal table at the front of the restaurant just inside the window.  All the food is designed to encourage people to share.

And what sort of dishes will we see on the menu?

It will range from small to medium size plates.  The plates focus around one or two main ingredients, and then you use other spices or seasonings or herbs to bring those things to life. Dishes you'll see on the menu will include things like Mackerel ceviche, smoked chiili and rye crackers, chargrilled squid, tomatoes, aoili and dukha as well as beef rump, golden beets and anchovy mayo.

Are you going to take bookings?

I think it's just going to be a fast paced walk-in buzzy atmosphere as opposed to a reservations led restaurant.

You have architect Asif Khan, who did the Beach Cafe in xx doing the interior for you. How did you get him on board?

We have another cafe called the Pavilion in Victoria Park, and he lives around the corner.  He was one of our first customers, always in having coffee and breakfast.  We got talking to him and have become really good friends with him and it just made sense that he designed the restaurant.

So what's the look of the place going to be like?

It's a bit of a mixture of the traditional and the new.  As the food is about respecting traditional practices, and the best produce is made by sticking to traditional methods - less intensive slower rearing of animals. The same will go for the design.  It's about using traditional materials and designs - we have exposed brick walls, cast iron, lots of wood.  And he uses those materials in a bit of a new way as well.

It's a bit of a coup getting him to do it for you as well, given his previous work.

Yes, the shop front is custom made by him - with a big sash window through the middle with a window seat in it.  The other design feature is the table - we have this massive cast iron communal table which was custom cast for us in a foundry in East London.  Everything is fabricated and made to order so it looks amazing.  It's a really thin fragile looking table but because it's made of heavy duty cast iron material, it's actually rock solid.

We reference the market inside as well.  If you go around the market you can see festive lighting, the stuff that’s on a string.  We're using that as our lighting inside, but hanging it in a new way.  We also did a collaboration with Paul Smith, who have a shop around the corner. So all the staff will be wearing Paul Smith for Elliot's aprons.  They'll be sold in their shop as well.

If you’re in the kitchen - who's going to be front of house?

The restaurant manager is Beata, who has just finished working as the sommelier at Hawksmoor.  When she was sixteen or seventeen, her mum had a Swedish restaurant just up the street here.  So she's had experience on the market and already knows all the traders and producers and we've been friends with her and her family for a long time.

Do you think that you might think about branching out more?

Not necessarily, no. You can just get caught up looking at opening the next place without concentrating on what you're doing now.  As soon as you take your eye off what you're doing at the moment, your standards can drop.  For now we're very happy as the two businesses will work very well together.  The Pavillion is about lots of breakfasts and coffees, and this will be more wine driven.

In terms of the wines, are you sourcing from Borough too?

Well it's about trying to find interesting and good value wines that aren't necessarily the norm.  We're trying to find small producers, less well known that don't charge a premium.  We're into natural wines so are promoting the less is more approach.  We're also making the wine list reflect the style of the food so we’re keeping the wine list quite small with 8-10 each of red and white, a couple of sparkling and roses.  That will also be constantly changing and evolving in line with the style of the food.