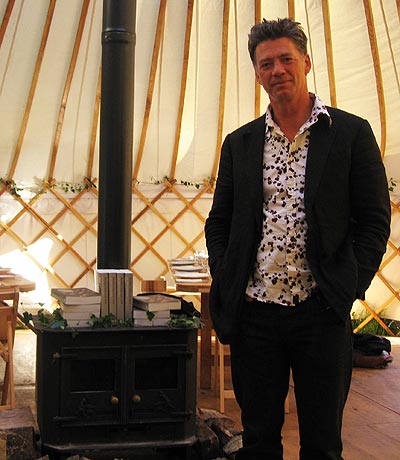 Since it opened in 2005, the on-site restaurant at organic food box company Riverford Farm has been slowly building a reputation as worthy of a trek down to the South West. Giles Coren described his meal there courtesy of chef Jane Baxter as ‘the lunch of my life’ while only last week The Guardian’s Jay Rayner called it no less than ‘a bloody good restaurant’.

This summer, Riverford is trying to bring that experience to as many people as possible, by taking a touring version of the Field Kitchen on the road. Hot Dinners caught up with the farm’s owner Guy Watson at the second venue of Riverford’s Travelling Field Kitchen – a ivy strewn yurt at Freightliner’s Farm in Islington – to find out what’s next for the farmer with big ideas.

Why did you decide to set up the Travelling Field Kitchen?

It’s an attempt to communicate what we’re all about – which is an enthusiasm for cooking and sharing great food, vegetables in particular – what’s in season.

You’ve had some great reviews for your restaurant in Devon.

The field kitchen in Devon has been extraordinarily successful. I don’t know anyone who’s had reviews like we have and I really do think it’s exceptional. There’s certain aspects about the shared meal that most people like, and the set menu almost everyone likes that.

So might you think about a permanent restaurant here in London?

Absolutely – this is feeling the water and finding out what works. I mean this works on the farm when people come, go on a farm walk – they’re already predisposed to sharing the experience. Does it work in an urban environment? Does it work away from the farm? All the indications are it does.

I have been for three years thinking about a restaurant project in London. I came quite close to buying one down in Peckham. But the more conventional restaurant sites that are going, just don’t interest me. I am a bit of a maverick and I like to do things in different ways.

But I’d be surprised if in eighteen months we don’t have something in London. I’ve come quite close to buying a couple of things. In one case the vendor backed out, in the other I backed out. I’ve decided I’m going to employ someone to develop the idea. 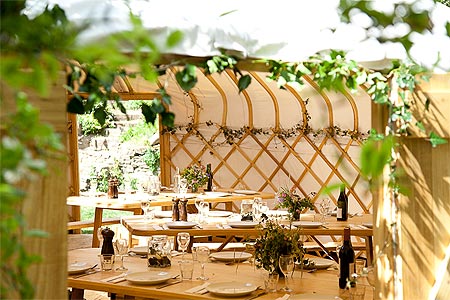 Have there been any real stumbling blocks to your success?

I think the food we serve has been phenomenal, but we’re not very good at making money out of it. To be fully booked, as we are most of the time and still not make money is a bit silly really. It is good quality food – there are no corners cut, which I have to say is a bit frustrating as the owner.

But of course, you do have great raw materials to work with.

We have what most restaurants find difficult to do, which is the supply chain. We’ve got the vegetables, and work with farmers all over the world, my brother is a butcher and the other brother’s the dairy and we have a network of other suppliers down to the coffee, so we know exactly how it’s produced and can source it very affordably even though it’s organic.

What’s missing is the in-depth commercial knowledge of running a restaurant, so I need to employ someone with that knowledge, but who’s still sympathetic to our values and ethos.

Our main problem is that i want it to be affordable – hence the pricing. I don’t want to run a Daylesford-style operation which is for the very wealthy. I want good food to be affordable for everyone. The limited choice of menus here was an attempt to cut out waste.

The Riverford Travelling Field Kitchen will be at Freightliner’s Farm in Islington until Sunday. To find out where else you can catch them this summer, go to the Riverford Farm website.