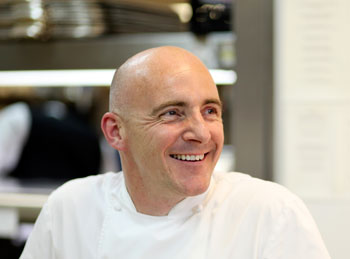 Stuart Gillies has worked with most of London’s top chefs, including Mark Hix at Le Caprice, Marcus Wareing when they were both at Gravetye Manor and Angela Hartnett at The Connaught, not to mention Daniel Boulud. Stuart has worked with Gordon Ramsay since 2002 when he was brought in to open The Boxwood Cafe.

More recently he’s been responsible for getting The Savoy Grill ready for its hugely-anticipated reopening as well as working on Ramsay’s latest offering at the One New Change development at St Paul’s. Hot Dinners found out what Gordon’s like to work with and what we can expect from the new-look Savoy Grill with Hell's Kitchen winner Holli Ugalde in the kitchen.

The buzz over the reopening of the Savoy has been great. It must make you excited about the reception the Savoy Grill is going to get.
I think it's not a bad thing opening late actually. Both myself and Gordon and the General Manager Kiaran MacDonald had breakfast yesterday because we've got a great relationship and we always wanted this to be a project with synergy - not just us with a lease and a hotel. And Kiaran said it gives the restaurant in the hotel a chance to trade on its own for a while and find their feet. Then we open and it's a big bang for everyone.

Why was there a delay between the hotel opening and the grill – was that planned?
The hotel ran eighteen months late, and their opening date was unconfirmed until late Summer. When they finally did give us a date, for us to get all the documentation correct to get the builders on site was going to take time. It's an old room - we'd run the space before with Marcus, but it was very different then. When you're changing it - it's like an old house. Everyone knows when you start working, it's like a can of worms. You need to make it good and you need to do it to modern standards.

But no-one’s more excited than me. I can’t wait to throw open the doors and show off what we’ve been practicing and planning over the last two years.

So how have you changed the restaurant?
When Gordon and I discussed it two years ago I said - shall we take it back to the Grill, the proper old Grill of the 20s and 30s? Let’s bring it back. Let's make it an amazing, buzzy, theatrical experience like it used to be. If you put the time and patience and training and commit the money to it, you can pull it off brilliantly. So you have the old-school charm in a modern environment. The best of the old and the best of the new.

We've put a champagne bar into the room as you walk in, to create atmosphere instantly. Before it was a great room, but it could be awfully intimidating. We wanted to get over that and not be a gentleman's club. We didn't want to create that at The Savoy. We wanted it to be something for everyone. The gentleman's club people will like the fact we've got a hot carving trolley every day for lunch - a different roast. And the ladies will like the fact that there's more atmosphere to it.

There was quite a fuss when Marcus Wareing got rid of the meat trolley when he opened at The Savoy Grill.
Marcus is Marcus - he does his thing. What he wanted to do was to create the food experience on the plate. Me, I want to create a fun, buzzy atmosphere where everyone thinks they could spend every day here. I don't want people coming once a year - I want them coming here three times a week, so it has to feel like a regular place.

I didn’t want a menu where you have to have all the courses, and a pre-this and a pre-that and extra chocolates after. It's the modern world - people don't want all that all the time, it's just too much. So we’ll have an a-la-carte menu - you can just order a starter and a glass of water. I'm happy with that, as long as you come. 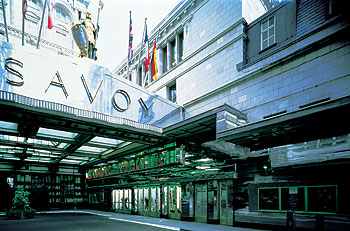 We understand you’ve brought in one of the London restaurant world’s most significant front of house staff as a consultant at the Grill
Yes, I can’t say who he is, but he’s training the team here in the skills of making a crepes suzette or filleting a dover sole or deboning a grouse at the table. It’s a lost art, but we’re bringing it back.

Have you made any changes to the table layout (historically, certain tables at the Savoy Grill were kept for the likes of Winston Churchill, the Queen Mother and Margaret Thatcher).
We wouldn’t change the table format. We have the same table numbers, the same booth seating and no change there – we just rejigged the room as it feels when you walk in. We didn’t want to change the table layout as there’s too much history.

You have someone of particular interest in the kitchen – Hell’s Kitchen winner Holli Ugalde. There had been a lot of talk about her coming to the Savoy Grill as Head Chef but you have Andy Cook in that position.
Holli’s certainly going to be working hard, that’s a fact. I hope she knows that! It’s an amazing opportunity for her, winning the show, and the point for her is not to come here and run the kitchen. With the best intentions, we all know that’s not going to happen, because she doesn’t have the experience and she doesn’t know London. Even if she’s the most talented chef in the world, she’s still not going to come in and run that place.

We’ve got myself and Head Chef Andy Cook at the helm, steering it down the path that we’ve put together with Gordon. She’s coming here to learn and get the most amazing experience during one of the world’s biggest launches of the year. It’s one of the most iconic dining room and hotels in the world – that’s no exaggeration. She’s going to see how you do it and how you create that magical experience for the guest.

What position will Holli take in the kitchen?
She’ll be one of the sous-chefs – that was the deal for her. But she’s one of the team, working the same as everyone else. She’s not along for the ride, not just for PR. That was never the deal and Gordon made that very clear with her. She said to Gordon ‘I don’t mind if I’m just a commis, I just want the opportunity to get into a place like that and experience it first-hand.’

Given that you were going to be working with her, did you have a say in the judging?
Five of us flew out from London to judge one of the final shows. We all had a say and it was important that the competitors had met me before and saw that this was real – it’s not just Gordon and TV and LA.

I don’t watch the show to be honest. No disrespect to Gordon, but it’s not my kind of show. The Americans love it – the viewing figures are huge. At times it’s been 20 million.

When I think back to the days I started in cooking, if we’d said in 25 years we’d do a TV show where 20 million people watch us doing service, you’d be,‘you’re having a fucking laugh.’ Cooking these days is not what it was – people find it exciting, creative and exhilarating. We did for years without any of the glory or the easy working conditions.

Now we don’t have the egos we did back in the Marco days. Back then, Marco was the best talent ever, but the egos in London were outrageous. (At this point Stuart tells Hot Dinners an unprintable story about Marco calling up another well-known chef at the time during service to shout obscenities down the phone)

People come from all over the world to eat here and they compare us on the world stage to New York, Tokyo, Spain and Paris – it’s fantastic that we’re at that level now. So what better time to do something proper Old School?

Given what you've just said, where have you eaten well recently in London?
It’s rare I don’t have a good meal in London. I was at Roast for breakfast, I think it’s very good, a very clever concept. I was at Galvin Bistrot the other night with Gordon – that’s probably the best steak tartare in London. Terroirs I think is fantastic and I love Yauatcha and Barrafina. Once a week I do a date night with my wife. If we want to do something local we go to Chez Bruce – and she just found a great sushi place in Clapham, just by the crossroads – a husband and wife operation, just two staff but it’s bloody good quality. 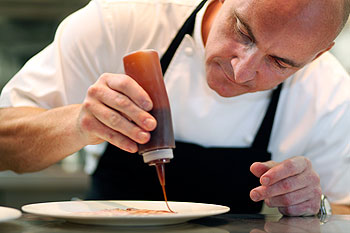 You must always get asked what it’s like having Gordon Ramsay as a boss?
He’s nothing like he is on TV. As a boss he’s more generous than you’d ever believe – trying to keep people happy and share the wealth of the company’s success. He’s demanding, but in a way that he gives you a lot of automony – he’ll give you the chance to make mistakes and then analyse it with you.

Anyone who’s ever met Gordon would say he’s a charmer – and he is a charmer. And he can turn it on for anyone. But he’s a great talent – he gets food and understands it. He has much of an open mind on what’s going on in restaurants and culinary circles than anyone gives him credit for.

He spends a lot of time going to Texture, Barrafina, Wright Bros in Borough Market – he goes to those places with me. He wants to see what the public likes and where the market’s going.

Generally when Gordon and I talk about a concept, we only need about 15 minutes sometimes. I’ve known him a long time, we’re the same age, but our backgrounds are completely different, but then that’s turned out to be beneficial for both of us.

And it’s business as usual for Gordon Ramsay Holdings?
We won’t stop continuing to push and expand. I know the company made mistakes when it expanded too quickly. Gordon learned a lot from that – it cost him a lot of money but he’s still standing and the company’s still good. Today in time, we’re in the strongest position we’ve ever been. There’s a much better understanding of what we shouldn’t do rather than what we should do. You live and learn.

We have to ask you about [this week’s] news about Gordon’s father-in-law Chris Hutcheson leaving the company.
It’s sensitive – I can’t really say much. What’s in the press is in the press. We issued a statement saying that Chris Hutcheson has stepped down as CEO. Chris was instrumental in building the company to where it is today and has been an amazing support and advice to Gordon over the years. But Chris is 63 – retirement was always coming, you don’t do it forever. And London’s moved on as well – everyone’s coming here, Daniel, Ducasse – Wolfgang Puck’s on his way over – and that’s the competition these days. If you’re a company like this with Gordon’s ambition, do you keep doing what you’re doing? No, you look at the market and you stay up with the competition by staying fresh and moving in new directions.