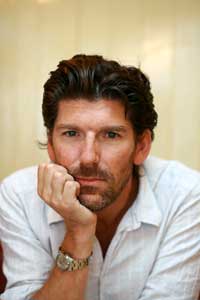 Some people would say Russell Norman had one of the sexiest jobs in the London restaurant business. As Operations Director of Caprice Holdings, he was responsible for launching the new oyster bar at Sheekey’s and planning the company’s other openings in Dubai and New York. Why did he give all that up to open his own restaurant, Polpo, in a recession? Hot Dinners finds out.

You’re one of the first restaurateurs to harness the power of Twitter in opening your restaurant Polpo. Was it all planned that way, or were you surprised by how it took off?

It started out as a bit of fun with Twitter. We thought it would be interesting to plot the build of the restaurant, the trials and tribulations and pitfalls and so on, on a public forum. I had no idea what Twitter was, I just started to send tweets and it picked up and caught on rather quickly. Twitter certainly helped get the restaurant talked about.

It’s been very useful as a market research tool. In the initial stages we were taking bookings but it was proving difficult for people who walk off the street or tried to book at short notice. It’s a small restaurant – 65 covers, and those covers went very quickly and they were booked by people who were able to plan their lives, three or four weeks in advance. And those people who couldn’t, wouldn’t or didn’t want to do that, would come along and find that they couldn’t come in.

We wondered what the best thing to do was about reservations – do we take them or not – so Twitter was very useful in gauging opinion. Our decision to stop taking reservations was pretty much based on those responses.

Were you at all miffed by Metro reviewer Marina O’Loughlin’s reference to your ‘interminable’ tweets in her review?

I don’t think I was miffed at all. Bemused, I think. Interestingly the printed review had one headline which was about design, but when she put the review online she changed the headline to one which was all about Twitter ("Thanks to Twitter, Polpo is the hottest table in town"). So – not miffed, no. Amused, if anything.

You held a key position at Caprice Holdings, what made you decide to give all that up and open your own restaurant?

The Caprice Holdings position was a really grown-up job. I was operations director and had responsibility for a very large number of high profile London restaurants and I was also heavily involved in new projects. So it was a job I thought I was going to retire in, no question.

But while I was there and while Caprice Holdings took a certain direction, I found myself taking a separate one and that was thinking that I want to get back to basics. I thought, I’ve got lots of good ideas and they’re actually very different in terms of concept and delivery to the ideas that Caprice Holdings has in terms of opening restaurants. So my choice was do I jump ship and work for another company that’s closer to what I’m interested in, or do I do what I’m interested in myself?

So you were looking for a different kind of restaurant experience?

Even though I was very much enjoying this grown-up position with everything that came with it, the expensive suits and the very glamorous surroundings of day-to-day working life, on my days off I would seek out scruffy places, things that had lots of character, and realised that the place I was looking for in London didn’t actually exist. I spent quite a lot of time in New York and liked a lot of the downtown bars on Lower East Side, Tribeca and Soho and felt that there wasn’t really anything like that in London.

That was my starting point – there is a gap, I’m looking for somewhere to eat and socialise that doesn’t exist in London, so perhaps I need to be the one that creates it.

You’ve said another influence for Polpo was the Bacari in Venice.

I’ve been thinking about the idea for Polpo for a good couple of years and as well as the trips to New York, I spent a lot of time over the last 15-20 years going to Venice as well – another city that I adore. The two cities merged in my imagination – and so everything I loved about those scruffy NY bars and restaurants and everything I loved about the Bacari in Venice, really humble wine bars with food, those two ideas came together in something I thought would be very relevant for London. 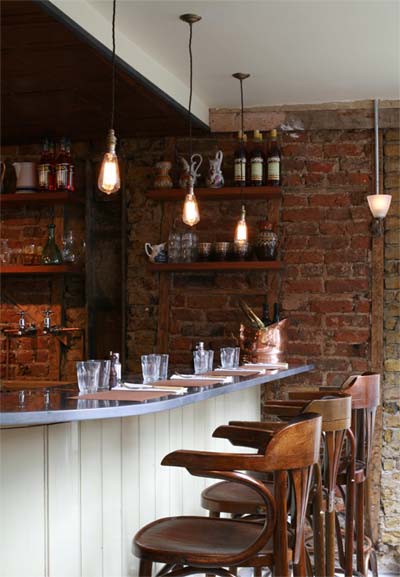 One of the great things about working with Tom is he’s able to surprise in ways that really excite. He did something incredibly simple when we opened with one of the ciceti (pronounced chicketi). In Venice they’re usually a bit of toast with a bit of salt cod smeared on it, or some chopped chicken liver, they’re never really challenging, but Tom just put a mint leaf between the prosciutto and the fig and that addition of that one ingredient really transformed something quite simple.

Something else he did was for his pork belly dish – the little touch he brings to it is it’s served with radiccio. Tom tosses the radiccio in the hot pork fat, which does two things, it wilts the leaf and adds sweetness – it’s a small detail that makes all the difference to a dish. (Hot Dinners has tried this dish and can testify to its tastiness!)

But it was a risk, leaving such a well established company to set up on your own, wasn’t it?

When the economy went through the floor last year, that was a kick up the backside for me. Rather than think, like other operators, ‘Shit, what are we going to do now?’, I realised that what I had on paper and was discussing with investors was actually more relevant than ever.

And you were looking for a site at a good time, weren’t you?

That window of opportunity was very small indeed. Last year when we started to look for properties, it was a buyer’s market and premiums were low and landlords were desperate. Now if you go to any agent and ask about properties, we’re back with premiums in a big way. If you want to jump on the bandwagon now, you’re too late. We’re definitely back to the position we were two years ago.

A lot of people have suggested you’re already working on a second Polpo.

Toby Young speculated in his Independent article about a second Polpo. He asked me the question and I said ‘No’ – but he still wrote that he wouldn’t be surprised to see several of these in the next five years.

But was Toby right?

There are certainly plans to open a second restaurant. I’d be disingenuous if I was to say that that second restaurant wouldn’t have elements of Polpo, and may even have a connection in terms of the name, certainly in terms of the feel and the concept. But it won’t just be a carbon copy, Disneyland version of the first. It would need to be interesting to me. We’re not looking actively, but we’re interested – that’s true to say. We want to make sure that what we do here in Beak Street with Polpo is absolutely right. We’re lucky that it’s establishing itself rather quickly, so we really need to concentrate on this and prove it’s not just a flash in the pan and that it does have staying power.

What were the lessons you’ve learned with Polpo that you’d take to your next project?

The biggest lesson is that you need to stay true to the concept. By taking reservations initially, we made a mistake. This is a neighbourhood restaurant and by taking reservations, what you’re saying is that it’s a destination restaurant so you can book for your special occasion. That didn’t work for us. It’s slap-bang in the middle of an area where lots of people live, work and play and this restaurant is really for those people. It’s a neighbourhood joint.

So, unlike those restaurants with Caprice Holdings where you do book months and months in advance, Polpo is very humble and it needs to have that feeling of casualness – you just stroll up, sit down, eat and leave.

You’ve opened up just around the corner from another famous ex-Caprice Holdings director, Mark Hix. Did he offer you any advice on going it alone?

We met and had lunch and dinner several times and we talked generally about restaurants. But when we got this site here, and Mark just a couple of weeks after us got his site, we just found ourselves too busy setting up our own restaurants to have any meaningful conversations about it. But when we did get together, we did laugh about the fact that here we are, two ex-Caprice Holdings directors opening up restaurants at exactly the same time – we opened on the same day – in neighbouring streets.

But as Mark said, and I’ve got to credit him with this observation, we’re creating a little West Village here. The West Village now is incredibly fashionable and trendy, but within our lifetimes it wasn’t – it was a nothing area. I think with Hix on Brewer Street and us on Beak Street, I feel proud that we’ve injected a little bit of life in an area that needed it.

Outside of Polpo where did you last have a great meal in London?

I’m a huge fan of St John – it’s a bit of a schlep now we’re based in Soho, but it’s a restaurant I’ve got a lot of time for. It’s completely down to the simplicity; there are no airs, no graces, it’s a very simple dining room with simple furniture – it’s honest and not messed about with and so refreshing to dine in that environment.

In a weird sort of way – and I’m not for a moment putting Polpo in the same bracket as St John, the one thing they share and have in common is that simplicity. Our head chef Tom and I spent a while in Venice recently trawling all the Bacari and a few simple restaurants and each of the dishes we had, we scientifically deconstructed and realised there were only four ingredients per dish. That’s something we’ve definitely borne in mind at Polpo, the simplicity of the dish and its execution – that’s something that Fergus has always done at St John’s which is why so many chefs and restaurateurs namecheck St John.

Well I always enjoy going to Lemonia in Primrose Hill, and other really good meals I’ve had recently – Terroirs and a Vietnamese restaurant in Shoreditch called Cay Tre – absolutely stunning flavours. My other really memorable dining experiences have been in New York – I had a great experience at Moto in Williamsburg and a place called Inoteca on the Lower East Side.

Find out more about Polpo here