He roared on to our screens as the no-nonsense, fast-talking French foil to Michel Roux in BBC’s Michel Roux’s Service, who took no prisoners and managed to steer seven of eight initially unprepossessing candidates towards a rewarding career in the front of house. Hot Dinners caught up with Fred Sirieix (his email sign-off explains how it’s pronounced - see-ree-ex), General Manager of Galvin at Windows to talk about his passion for good service and the all-important Magic Touch.

We hear you spent your birthday at [World Chef Championship] with Chris and Jeff Galvin at the Bocuse d’Or in Lyons. That sounds like a hell of a road trip.

It felt like an Indian wedding – three days of a birthday. The first day we ate at Le Train Bleu for lunch. It was good, but the prices were unbelievable. I’m just thinking of the bloggers who eat out in London and complain that’s it’s expensive and I’m thinking – please just cross the Channel. Go and see the prices in France! Le Train Bleu is one of those institutions so obviously tourists would go there regardless - but steak tartare: 30 euros. Our bill for three was 170 euros – we had two beers each, steak tartare and a plate of cheese. Can you believe it?

They were very smiley though and when I talked to the maître d' about sending some stages through there, he was talking about service, quality and excellence, so that was very good.

But it wasn’t all good?

Well we went to a little bouchon that evening and while it was warm and hospitable, it was just missing those magic touches – and I’m not talking about the chair thing. I just mean a bit of interaction. If it was my shop, I’d offer people maybe a digestif at the end – go and mingle, but no, there was nothing.The English go to the continent and think the French are brilliant, but I’m French and as much as I love them, I’m very critical of them. That kind of thing makes me embarrassed to be French.

The next day we went to the Brasserie Georges – it was shocking. There was Chris, Jeff me and Andre [Garrett – Galvin’s Head Chef] and our waiter was so rude we wanted to get up and punch him. We ended up having the maître d' serve us – but you know they still served the crème brulee and it was split – I didn’t eat it and they took it away without asking whether anything was wrong. They couldn’t care less.

Lyons is a temple of gastronomy, but the restaurants we went to the food wasn’t amazing, nothing exciting. You can have simple food that’s done so well and it’s incredibly tasty because the products are right and the whole package makes you feel great, but even though I had some great food, but the guys serving fucked it up. It’s so sad.

Has France lost its way as Pierre Koffmann suggests?

Do people there know how to do it? I was saying to Chris ‘You’ve got nothing to fear, because we’re really in the Premier League. We’re like the Manchester and the Chelsea of this world’. But you mustn’t think you’re always going to win. If people aren’t performing for you, then you have to get rid of them. You have to have people who embrace your values and enjoy what they’re doing otherwise they ruin your restaurant.

I say to my guys if you don’t enjoy what you do – life is short, go and work somewhere else. 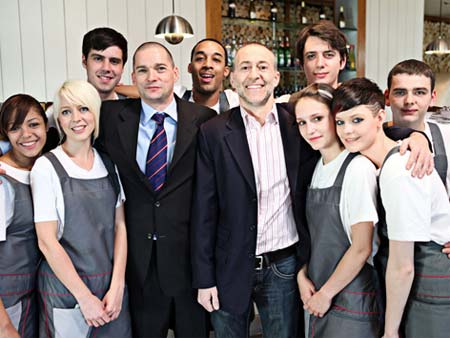 Were you surprised by the popularity of Service?

I was expecting more people to watch it! I think it’s good that people like it. The kids we chose were very representative of the kids in this country. It makes you wonder about education – to start with these kids were unbelievable, but they got better!

The candidates seemed surprised by your disciplinarian attitude.

It was very tough, but you have to make your mark – it’s like it was with Jarel. I told him I’m not going to take it. And then you’ve got kids like Nikita who’ve obviously got problems with low confidence, self esteem and things like that. It’s about inner change and how do you bring meaningful inner change to somebody, that is going to be long lasting and something that they’re going to believe in. It’s not easy. You do wonder if you can change someone – if you can make somebody different.

Did you have any favourites?

There were favourites – but they could all do it, but they all had their flaws and their good points. The only thing is their attitude – you have to want to do it.

And were you happy with the result?

We discussed the potential scholar every week with Michel and the right people did win. I’ve seen a lot of them since we finished – I’ve kept in touch with almost all of them.

It looked as though everyone got very involved in the programme.

Well when I do something, I do it full-on. I do it to the best of my ability

From the show it’s clear you have a passion for your side of the industry. Was that always the case?

Since I was sixteen I’ve been arguing with chefs and teachers about the importance of restaurants versus the cuisine – for me it’s always that we’ve been equal. But I came into this industry by chance. I met a pastry chef on a bus and his job sounded interesting, so that was it - I wanted to be a chef. My mother was so upset: she wanted me to study. In the end, even though she didn’t want me to do it she pushed me to get into the best school in the country. At the eleventh hour I changed my mind and went into front of house. I was a very good chef and could accurately reproduce dishes, but I don’t think I had the creativity. And I made the right choice.

We always hear that the French have a real respect for those in service. Is that the reality?

In France when you’re doing professional studies, the best students get to choose whether to be in the kitchen or the restaurant, but those getting the lowest marks have to go into the restaurant. Even there, it’s how people perceive service – very negative.

The education system is flawed and needs a complete overhaul. If you go to do professional studies you’re a failure, you’re parked on the sidelines. Everyone wants you to have a degree. Manual working isn’t considered something that’s very important – it’s for people who are not very smart. When I arrived in college I was felt superior to my peers because I’d arrived from the Lycee and they looked down on those who were apprenticed. But why did I even feel that way about my fellow students? Because society was telling me that the more you progress in education the more successful you are.

And presumably you think we’ve still got some way to go in Britain when it comes to service.

Until the Roux brothers arrived here there were no restaurants, so it took a while to get that right. Then it was the age of Conran and the grand restaurants. Finally it’s the turn of service and we come to the whole package, the whole experience of eating out. But you know Front of House don’t help themselves – there’s no-one on Twitter.  I’ve always thought if I want recognition I’ve got to go and get it for myself. No-one’s going to give it to me.

Why are the British so reluctant to try for Front of House?

The British were running the world for a very long time so there’s a sense of superiority that’s deeply ingrained. It makes people think ‘How can I be a waiter?’

Wasn’t that the problem with James when Service filmed at Bovey Castle?

Yes, he thought he was above it. By serving those people he becomes a servant. But the thing he doesn’t know is those people could be sitting in an office, doing a really boring job, they could earn less than him and have just saved up to give themselves a treat. We just have to change our perception.

At Galvin how many British are there front of house?

Three out of 45. I was talking to the teachers at Westminster Kingsway last week and they only have six people training for front of house. They all want to be chefs. This is the sixth industry in the country. 2.5 million people work in it – we’ve got the Olympics coming up, but we can’t get the people. Nobody’s interested.

So whose fault is that?

We all bear some responsibility, chefs, teachers, even restaurant critics. Giles Coren – I love his writing, but the other day he was saying he’s too old to be a barman. There’s this misconception that you have to be a certain age to be a barman and after that you get a proper job. A lot of people think like that. 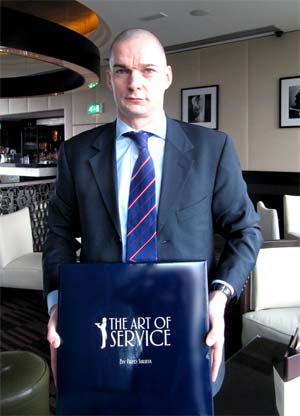 Why do you care so much about service?

That came from my parents who were serious entertainers – they taught me all the basics of cleaning the house, preparing a nice meal, getting champagne ready for your guests, getting all dressed up. This deep sense of core values was something my parents always had – they gave me a solid foundation. When you die what’s left? You’ve got to think of what’s going to be left behind and live your life how you want to be remembered.

What about Galvin at Windows

It’s a special occasion restaurant, but it’s also a restaurant for everyday. You can come for lunch, £29 for three courses – the food that you get, Jesus! There’s a menu for £39 in the evening. You’re looking over the Queen’s garden. It’s busy and buzzing – that’s why we talk about the experience.

Where in London have you eaten well recently?

I had a very good meal the other day in Chapters All Day Dining, close to where I live. I like Bar Boulud – I like the atmosphere there. The food’s OK, I’m not going there for culinary excellence, but I can’t fault the service.

And which restaurants have the best service in your opinion?

El Pirata in Mayfair. It’s amazing – Fernando and Francisco the mangers there are very good guys – they’re class. And I have to say the service I had at La Chapelle for my partner’s birthday was mindblowing. I went to the Blue Bar at the Berkeley – that was very good too.

One of the key things you kept returning to in Service was The Magic Touch, referring to waiters being speedy enough to get to the chair when a guest is sitting down. Did you coin that phrase?

Yes. It’s about being in the right place at the right time. Whenever you go to a restaurant, if you don’t get five smiles by the time you sit down, it’s crap. People want to be greeted straight away – the first contact is so important.

It doesn’t matter if you pull or push the chair, just that you touch it. It’s the intention that counts.

Fred Sirieix’s Art Of Service board game and training tool is being rolled out over the next few months.

Read our interview with Michel Roux Jnr and find out more about Galvin at Windows.