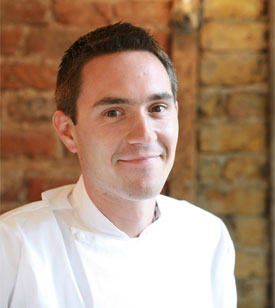 Tom Oldroyd is the Head Chef at Polpo and Polpetto - Russell Norman's hugely successful take on Venetian bacari. We grabbed five minutes with him, weeks after the opening of Polpetto to find out why his small plate take on Northern Italian food has been such a huge hit with Londoners.

Hot Dinners: We were a little wrong-footed when it turned out Polpetto was opening before Spuntino [another Russell Norman restaurant]. What was the story there?

Tom Oldroyd: Spuntino was put aside for now because this came up which was too good to refuse. So we took this on and it leapfrogged Spuntino - but it's so good that we did. It's been really good fun. As you can see it's got a great atmosphere. It's above an iconic pub.

What sort of ideas were in your head when it came to the menu planning at Polpetto?

We wanted to keep it very similar because we knew we were on to something good [at Polpo]. It worked - the prices, the sharing concept, the Northern Italian/Venetian dishes - it all worked. We wanted to keep that concept going, but Russell's idea of Polpetto was of a tiny jewelbox version of Polpo, so that translated into the menu as well. So it's slightly more refined here. It's a restaurant where you can come and eat a little slower. So we took four or five main dishes that we use at Polpo and brought them over and then came up with some other ideas.

Will the menu at Spuntino be the same?

It'll be a downtown New York/Brooklyn feel - American/Italian diner style. Everything will link up quite nicely.

You're a big fan of Venice we hear.

Myself and Russell went out a few times to do research before Polpo and I've got a trip lined up soon, because I've been feeling withdrawal symptoms.

How did you and Russell meet up?

How it happened was through Alistair Little's. We worked there for three years when I first moved up to London. Russell dined there frequently and when Polpo was happening he contacted a few people, got in touch with me and we started talking.

And you were at Bocca di Lupo as well...

BDL was great - I really enjoyed working there and learned a lot from Jacob Kennedy. But this came about and this whole project was something I'd always wanted to do. If I opened my own restaurant it would be the same thing - it's a dream come true.

Both Polpo and Polpetto have received great reviews which must have been pleasing.

There's been a fantastic reaction - the first few months at Polpo were absolutely crazy, really busy. I think it had a lot to do with Russell tweeting so much. Twitter's like our notice board in a way - everyone can check us out and see what we're up to. A lot of people know more than me - they ring me up saying 'You just got a new fridge delivered - I've just seen the photo.' The feedback's been amazing.

Finally - what was the last good meal you had in London?

The last good meal I had was a place called Noodle Oodle on Oxford Street - very basic, it looks like it should be pretty rubbish from the outside, but I had a massive bowl of won ton soup and freshly-made noodles and thoroughly enjoyed it. I don't actually eat out that much - I've always been so busy and when I wasn't working, I was sleeping, or trying to. Anywhere where I feel like I'm getting value for money.

Find out what the critics thought of Polpetto