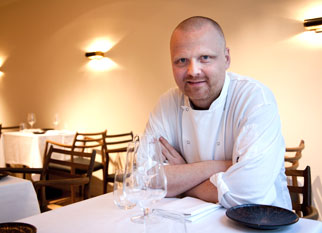 Danish chef Christoffer Hruskova has just opened the two floor Nordic restaurant ‘North Road’, his second venue in London, which days after opening has already created quite a buzz. Not only does the name refer to the Great North Road, which started its course at Smithfield in pre-Roman times, but it also refers to Hruskova’s Nordic heritage....

Where were you born?

Funen in Odense, which is Denmark’s oldest and third largest city and also the hometown of author and poet, Hans Christian Andersen.

Have your Danish roots informed your cooking?

Of course. In Copenhagen I worked at Denmark’s longest running Michelin starred restaurant, King Hans and launched Emmery organic bakery and grocers. However, my experiences working around the globe have greatly influenced my style, from Tetsuya in Sydney to The American Club Chinese Restaurant in Hong Kong, Jardinière in San Francisco to a range of other venues in New York, Japan, South and Central America and even Cuba. In London I worked for Peter Gordon at the Sugar Club then for Christine Manfield at East@West, Covent Garden. I opened Fig (now Fig Bistro) in 2006.

Is London your home now, or do you still harbour nomadic tendencies?

No, I am part of London and its ever more exciting restaurant scene.

What do you miss about Denmark?

Have you brought Danish design into the look of North Road?

The entire restaurant has a Scandinavian feel from features such as the handmade oak chairs from J.L. Moeller, Cherner bar stools and Serge Mouille lights.

What items do you source from the UK?

I use wild herbs and flowers from Kent, fish and seashore herbs from Dorset, hand-dived scallops and langoustines from Scotland, Cumbrian lamb and beef from Galloway. Although not currently in season, British wood sorrel is my favourite plant. And our sparkling wine comes from West Sussex - ‘05 Classic Cuvée, Nyetimber.

What is the most exciting dish you have ever been served?

I almost cried with happiness when I first tasted musk ox tartare at Noma – its refined simplicity was inspirational. I also loved the fact that you could eat it with your fingers despite it being a two Michelin-starred restaurant.

Name three specialities which will we find at North Road?

How do you anticipate critics will react?

If they are open-minded, I think (and hope) that they will find North Road as interesting as it is fresh.

What are your favourite restaurants in London?

My wife Katja and I love the Vietnamese restaurants on Kingsland Road and often pop into the canteen-like Song Que.

And where was your last great meal in London?

What has been the most significant change in the capital’s gastronomy scene since you opened Fig in 2006?

Chefs are raising the game by using more locally sourced produce, taking more care and thought when selecting producers to work with. But I also think that the London diner has become more discerning in what they want from restaurants: the food of course has to be good. But they want more than that. It’s a complete experience.

Is there anything you find frustrating about London diners?

I think that they are still quite resilient to change. They know what they like and sometimes it’s hard to encourage them to be experimental.

Are you a cheese or pudding man?

Heaven is smoked soft cheese from Funen with rye bread, red radish and finely chopped chives. Vacherin Mont-d’Or fresh from the oven, Comte and Stinking Bishop are also most welcome...