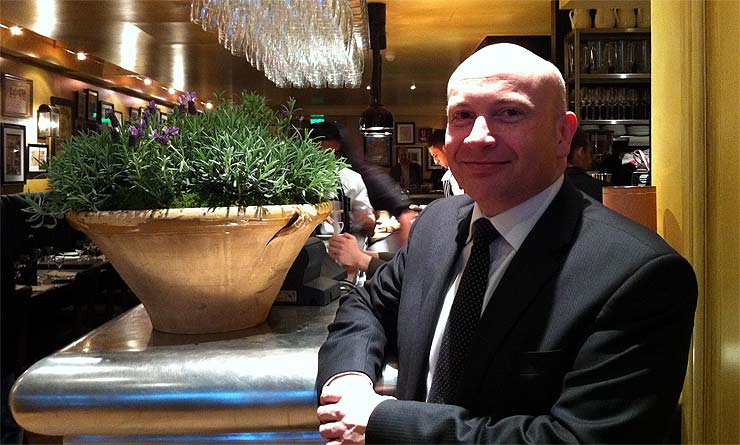 Master Sommelier Ronan Sayburn has a stellar cv in the restaurant business.  He worked for Le Manoir Aux Quat' Saisons, and was Executive Head Sommlier of the Gordon Ramsay group mainly at Royal Hospital Road, In 2010 he became the Director of Wines and Spirits for the Hotel du Vin group.

Hot Dinners caught up with Ronan at the opening party for Clerkenwell’s Bistro du Vin to find out what wine lovers will find on the lists there and to hear about his rather famous new trainee – Danielle Meenagh from Michel Roux’s Service.

So how crazy was it in the run up to opening Bistro du Vin?

Well I’ve done Claridges, The Connaught, Savoy, Boxwood, Maze – all with Gordon Ramsay, so it was pretty crazy. But I know what these things are like, as the first person’s coming in the last builder’s sweeping up the last of the dust. It all comes together in the end.

What would you say Bistro du Vin’s USP was?

It’s simple food in tune with what’s trendy now, and trendy in Clerkenwell especially. Simple bistro food – nothing too complicated but using really good ingredients. We source everything quite locally.

You were brought on as Director of Wines and Spirits for the Hotel du Vin group last year, so tell us about the wine here.

The wine list is about 80 whites, 80 reds – it’s a very indulgent list. I’ve just gone for a whole mix of different things I like because there’s enough variety on there for everybody.

The really exciting thing we’re doing is that we’ve got a machine called By The Glass, similar to Enomatic, so there’s 6 whites and 10 reds in that. What we’re going to put in the machine are all the iconic stuff. So we’ve got a 2000 Sassicaia (from Tuscany), a 1996 Château Palmer, things like a Bodegas Noemia from Patagonia, so some interesting stuff. We do a 50ml measure or a 125ml measure. Our pricing slides depending on the cost stuff, so when you’re in one of hotels or restauraunts you can splash out on a very expensive bottle of wine, but you know it’s not being marked up by 75%. We’ve just extended that principle to our wines by the glass.

For me it’s like a self-service fine wine buffet.

For lots of people one of the draws will be your assistant sommelier Danielle, one of the winners of Michel Roux’s Service.

Danielle’s like everyone else, wanting more challenges. So when we knew the bistro was opening I asked her would she like to live in London and be involved in a restaurant opening and she said she’d love that. She’s part of a small team. We’ve got a head sommelier called Romain Audrerie (former Head Sommelier at The Savoy Grill under Marcus Wareing) who’s going to be working with Danielle every day, so for her it’s something new and exciting.

To get to a high level of knowledge as a sommelier does take years and Danielle’s only been doing it six months, so she’s still very much learning the basics. She’s not academic – I know that sounds a bit patronising - but she’s very clever. So when you tell her and show her something once, she gets it. She’s very good at her tastes and flavours and I’m really getting her to work on her descriptors – she’s developing a palate and the thought process that goes into tasting wine. So when she gets more and more information it’ll also start to click together. She’ll get better and better.

Michel Roux Jnr told us he was absolutely thrilled by her getting a job with you.

She’s great, and she’s fun to work with! Sometimes she gets a bit giddy and excited – but she was a star in Winchester long before the show came out. She’s a little bit worried people will come down here and ask her what wines they should be laying down in the cellar, but I’ve told her just to smile, be honest and people will love her.