Chewing the fat with Fay Maschler 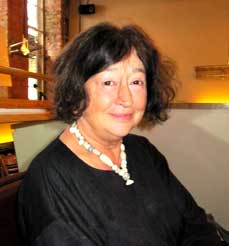 How long have you been planning the London Restaurant Festival for?
It was when the London restaurant awards were last year – the sponsor had just pulled out because of the recession biting and I just thought there’s got to be something better than this. It was disappointing for all the chefs who’d bought expensive tables in The Grosvenor House and so I thought let’s have a London Restaurant Week like London Fashion Week, which gets a lot of support. They get a reception at Downing Street which never happens to restaurateurs.

Has the reception from chefs been good?
Well yes, because all we’re trying to do is put bums on seats. It’s not like Taste of London – they don’t have to make that investment of time and money and equipment. They just carry on as usual, but we’re trying to push customers towards them. I mean Henry Harris at Racine said he’s got a lot of bookings for that week already so that’s jolly good. So he’s happy – what’s not to be happy about?

Which of the key events are you most looking forward to?
I like the idea of the Simon Schama lecture. I like the idea of bringing a Reithian lecture quality to a subject that everyone always thinks is a bit mundane – so that’s one I think that’s going to be a bit different, rather than highbrow.

So what is it about the London restaurant scene that distinguishes it from other cities?
I think it’s just a different mix – it’s to do with immigration. The history of English food is pretty dismal so obviously you’re going to get a different kind of cuisine developing. Apart from Fergus [Henderson] reinventing how we look at English food, there wasn’t much to gild – it was always imported; it was always Cypriot or French. So I think our restaurants developed in a very individual way. It’s different to Paris where everything’s French basically.

And what about Londoners – how have we changed when it comes to eating out?
I think the change has been that everyone goes to restaurants. When I started in 1972, it was something you did occasionally. It was a treat. It was formal – there wasn’t that kind of flexibility that exists now, that you could eat any time of day, any size of plate. I think that’s been an interesting development – that whole ‘small plate’ thing.  Because what it’s saying is we’ll accommodate you, the customer.  It gives you a choice that the more formal kind of meal didn’t give you.

What upcoming London openings are you particularly excited about?
The Galvin brothers - they’re opening in Spitalfields, there’s the Dean Street Townhouse and Pizza East which is going to open on the night of our awards, thanks to the cooperation of Nick Jones.

And what was the best meal you ate recently?
Probably my own cooking!