Talking to Ed Martin about gastropubs 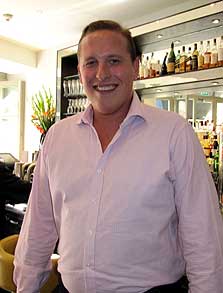 Brothers Tom and Ed Martin have carved out a name for themselves on London’s gastropub scene since they were among the vanguard opening up the Well in Clerkenwell back at the turn of the millennium.  On the back of that success they’ve opened eight gastropubs and have won numerous awards including last year’s Time Out Gastropub of the Year with the Gun. Hot Dinners sat down with one half of the operation, Ed, for a drink and a yatter at their Sloane Square bar and restaurant The Botanist.

It’s been a big year for you – you opened the Cadogan Arms in April and you just won the Catey Pub and Bar Award.

Yes, that was a massive surprise. I went along and thought it’ll be a nice evening out, another dinner to go to. We were sandwiched between Angela Hartnett winning for Murano and the Lifetime Achievement for Raymond Blanc, so it turned into a massive night – I think we were in Whiskey Mist until about 4 in the morning. It was a huge honour.

How important are awards, given you just missed out on this year’s Time Out Gastropub Award?

It’s good to be in the top four, although that was very disappointing. Something like Time Out is really important, because people do read it and follow it. As soon as you get something like that you’re packed. We won Best Gastropub 2006 for The Gun and immediately that day bookings just rocketed. Not winning for The Cadogan probably lost us quite a bit of cash!

How did you choose where to open your first place?

Tom opened the Well in November 2000 when I was still at university. He had a different partner then. He used to live above the Westbourne in Notting Hill and that’s where he got his initial ideas from – he was either in the Westbourne or the Cow every day of the week. And then he moved to Clerkenwell and the Well came up. Our growth has always been opportunity-led. We haven’t necessarily targeted one particular area. 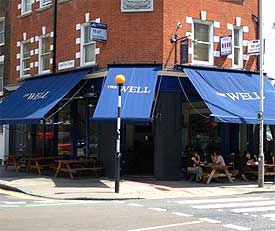 What made Clerkenwell the right place?

I view tons of places all the time – probably about two or three a week. Most of are rubbish, terrible frontage or not the right location – unlike [the Botanist] which doesn’t get any better. So the Well was the right place at the right time. Clerkenwell was still up and coming at the time – it wasn’t saturated like it is now – it’s a pretty hard market these days. But at that time, there was very little open and certainly nothing open on Sundays like us. The Well was a new, fresh idea.  Pubs were so dire in those days – it had a fantastic range of beers and wine and the food was brilliant. We got the design just right and it had a really good vibe.

We hear you set regular written tests for anyone who works for you. What’s that about?

It’s part of the training programme. It’s not an onerous thing – not a nasty school test.  For example, we make our own house wine and I want to make sure everyone knows what the grapes are and what’s behind it because there’s no point in doing these things if the customer never gets to find out about it. We make our own jams – we go up to our house in Suffolk where we have some orchards and spend a couple of days with chefs where we just pick and the chefs make all the jam. It’s lovely – we have damson, greengage, plum. So staff will be asked simple stuff, like where does the jam come from?

There are a lot of sibling teams in this business – what are the pros and cons with that?

The biggest benefit is trust; knowing that you’re 100% committed and that you can rely on the other person. The next thing is resolving disputes; as brothers we can have a raging argument and then two minutes later forget all about it – there’s no difference between us having argued over who’s got the toy and who’s doing the PR. I don’t think there are any downsides , although it does focus other family life on us a bit. We have a sister and sometimes I worry we’re talking about us too much and not her.

Why doesn’t she come into the business?

She’s an accountant and way too senior – we couldn’t afford her!

So do you each have a role according to your strengths?

We know we had to split things because we’d constantly be on top of each other. I run the financial side and the wet side of the business and design and build and finding new places. Tom used to be a lawyer, so he deals with all the contractual legal side of the business and he runs the food side and all the marketing and PR – it’s nicely split and works really well.

What’s the most important thing for someone in this business to get right?

The single most important thing is service. Always. Far and above the most important thing. You can forgive certain things but if you get treated badly, it’s game over. It’s important for me as an owner too, because if the customer is happy – he’s eating or drinking more, and I’m selling more and making money so it’s a two-way thing, everyone’s better off.

Based on that observation, where do you choose to eat out in London?

I love going to St John’s – it’s always so interesting and the service is impeccable. It’s the best informal service in London. I love places where you can eat on your own and not feel bored or self-conscious. I love Japanese so I like places like Roka and Nobu. We do tend to eat in our own places a lot as I want to check in all the time. The Wolsley is another favourite of mine. I think if you want to see the top of London dining and social atmosphere that’s the place to go.

And which London restaurant do you think best represents where this city is as a place to eat right now?

I’ve got to say our restaurant Pho which is a brilliant new concept. Me and Tom bought half of it a year ago. It’s Vietnamese, fast and casual. It ticks every box – it’s quick, healthy, cheap and it’s absolutely delicious.
The London restaurant scene has evolved immeasurably. It’s the best restaurant scene in the world by miles – there’s nowhere else you can get such range and such breadth or depth of cuisine at every price and such a high level of quality. I grew up in London and have lived here all my life, and I remember back then the only places you could eat on a Sunday were hotels and private clubs, which was great if you could afford it. Now on a Sunday you can go wherever you want and generally have a pretty good meal. It was actually quite nice in a way having deserted streets – but it’s much better having everywhere busy and open.

You got involved in the London Restaurant Festival, but not Taste of London – why was that?

For some reason, Taste of London doesn’t want gastropubs as a sector which I find extraordinary. It’s such an important part of London’s dining scene, but they don’t want us there. It’s quite annoying. 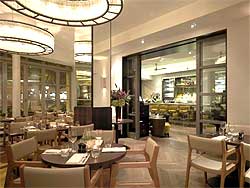 So what are you working on next?

I’d like to do something like The Botanist again. This works brilliantly – we are packed every day. But you couldn’t put this anywhere and expect it to work. All of our places are totally individual in design and what they offer. We always believed in catering to the locals and to the architecture of the building itself.