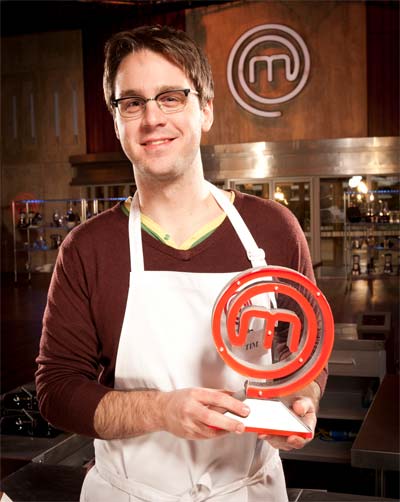 When American Tim Anderson won Masterchef 2011 he became the youngest winner in the show’s history as well as a trend on Twitter as London’s foodies started debating whether he’d launch his own restaurant in town.

Hot Dinners caught up with Tim to find out what sort of restaurant he is planning on opening, why he had to quit his job and where he likes to eat out in London.

What have the last few weeks been like for you?

It’s been completely life-changing. I’m still at work and with all the press appearances it’s been busy, but a lot of fun too.

How did an American come to enter Masterchef UK? Had you watched it before you applied?

I’ve been here for three years and have been watching it ever since Matt Follas won, two years ago, and I thought I should do this. It’s up my street, I like cooking and I’ve always been pretty dissatisfied with my job, so I thought it might be something I’d enjoy. My wife thought the same, so I applied online and here I am.

Were you aware of how big a deal being in it would be?

I didn’t think I’d ever get as far as I did. I thought if I can get to the final five or six, I’d be happy with that. I had no idea how much of a time commitment or how much work it would be. I really didn’t know what to expect at all. I wasn’t even sure what to do with it. The more it went on, the more intense it got, the more rewarding it got and the more it made me realise I wanted to cook professionally.

How does being a contestant in Masterchef work if you have a job? Did The Euston Tap (where Tim currently works) have to give you a lot of time off?

By the end when I was in the final four, I was filming so much I had to quit my job. I just couldn’t do both. It was impossible. The month of November was almost non-stop filming until the end of the month.

So are you sticking with the day job?

I’ll be at the Euston Tap until the end of May and then the plan is to work in some good kitchens, and I’ll be doing Masterchef Live at the beginning of June. Then I’m going up to Scotland to brew with some breweries and then start up a catering and consultancy business.

Can you name any of the restaurants you’re doing stages (work experience) at?

Not officially – none that I can speak of yet.

You had some amazing chefs mentoring over the course of the series. Who had the greatest impact on you?

Probably the one who had the biggest impact overall was John Torode. He was with us the whole time and would give us little tips here and there. He was an excellent coach. He did a lot of teaching and guiding that you don’t see in the edit – he was really encouraging and constructive.

Can you give us an example?

The one I remember wasn’t so much about cooking but on service was that if you’re serving food, don’t have a look on your face of complete terror or fear or disappointment. Always give service with a smile. Because if you have a look on your face that’s negative, it’s immediately going to translate into the food. People are going to expect something bad. So even when I knew I’d made a dish that wasn’t perfect, I always tried to serve it with a smile on my face.

Do you have plans to open a restaurant in London?

That’s what I’d like to do at first and then carrying on with that theme if it was a success, open a second restaurant for Northern Japan, central Japan...

Are there any London restaurateurs in particular you’d use as inspiration?

Thomasina Miers – who won Masterchef six years ago. She’s got the Wahaca Chain now – it started up as one and now there are lots of them. That’s so inspiring and I can’t wait to meet her actually so I can see how she did it.

You’re obviously very knowledgeable about beer after your stint at The Euston Tap – would you consider opening a bar?

Good beer’s always going to be a part of any restaurant I have. I’m not a brewer, but it would be cool to get involved with microbreweries.

There’s one just around the corner which I don’t get to go to as much as I’d like. It’s called Muna’s (on Green Lanes) and it’s a Sudanese-Eritrean restaurant – really interesting food, cute little place, very casual – I like it. And it’s not in my neighbourhood, but Asakusa in Mornington Crescent is a really excellent Japanese restaurant, really casual, divey . There’s a little bit of everything on the menu and it’s really unpretentious.

What and where was the last great meal you had in London?

I recently went to Hélène Darroze at The Connaught and that stands out in my memory. There was a course that combined a teriyaki sauce with stilton, Chantilly and beef cheek and that was really an exciting dish I thought.

Do you think living in London had any bearing on the food you made for Masterchef?

In the final the London burger is a direct reference to the London food culture. I tried to do a combination in that little burger of a London curry, and more classically British flavours like cheese and ale and chutney. It’s so inspiring and diverse here, there’s a lot you can learn from and draw on.

That said, the London burger was my least favourite, because it was a bit basic. The flavour was nice, and I think Greg in particular went for that one.

Were you aware of how much people are talking about you on Twitter during and after the show?

I’m always on Twitter. Tim Kinnaird, the finalist from last year who runs a patisserie now – he told me he’d made a lot of really good connections on Twitter. He said ‘Stay on it, and pay attention to what people are saying to you and about you on Twitter, because it might lead to something really good.’

How much contact do you have with John Torode and Greg Wallace now that Masterchef is over?

The day after the final aired, I spent a lot of time with John doing press stuff as well as Dhruv Baker who won last year and I also spoke to Greg on the phone for a while that day. It’s a master/student relationship – they’re still there to help and it’s really cool to have their numbers in my phone so if I do have any questions I can ring them up. I know that they’d be happy to help. I wouldn’t expect them to throw money at me to back my restaurant but they’ll always be there for advice.

And have you had any offers?

Yes – a fair few actually, which is surprising. It’s a bit early for me, but I’m going to keep in touch with all these people and down the line, when I am ready to open something, I’m going to say ‘Remember me?’

For details on where to see Tim cooking live visit www.MasterChefLiveEvents.com.