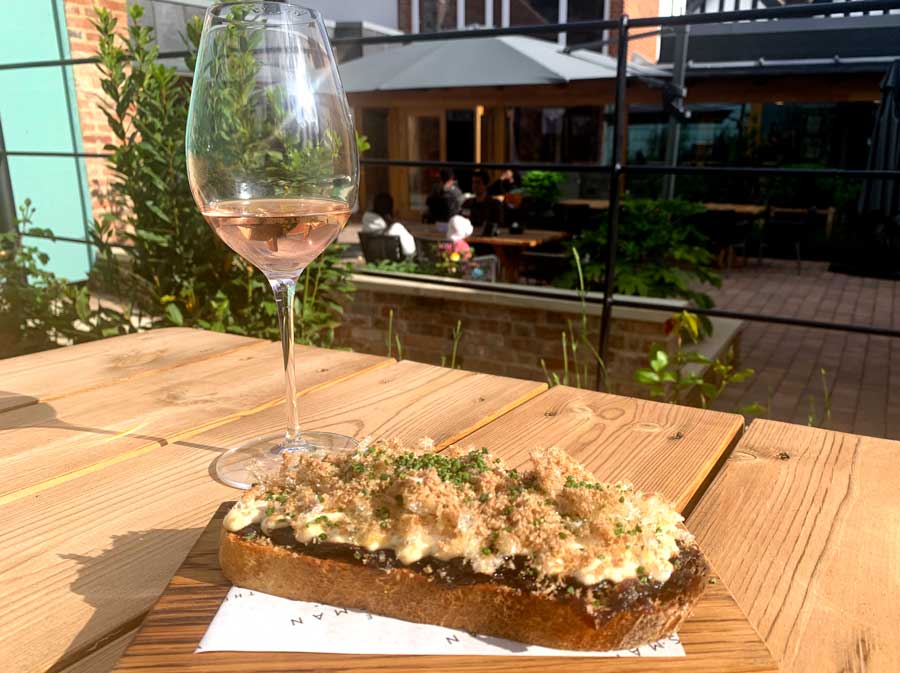 Lunchtime snacks from the Woodsman out in the Hotel Indigo garden - this was cod's roe and caramelised onions on sourdough.

This is the latest opening from Mike Robinson - restaurateur and co-owner of the Michelin-starred Harwood Arms in London. He's taken over the restaurant at the Indigo Stratford-upon-Avon hotel, with chef Jon Coates, who was previously at the well-regarded (but now closed) Dickie Fitz.

The hotel, and restaurant, are slap bang in the middle of Stratford-upon-Avon, this couldn't really be better situated. It's right opposite Shakespeare's birthplace, and barely five minutes from the river and theatres. We took the train there from Marylebone and it was just under two and a half hours with one change. You can easily walk into town from the station. 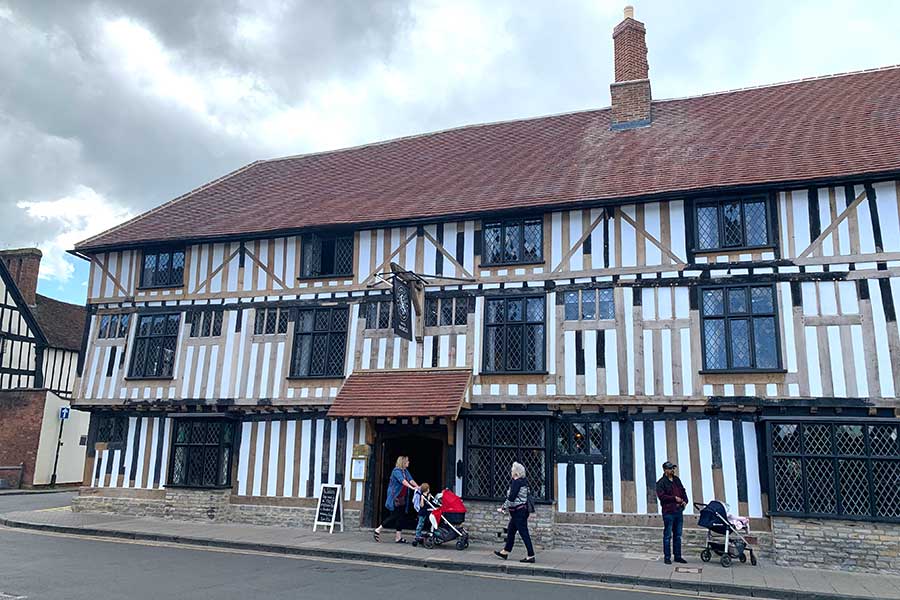 The hotel and restaurant - it's fair to say it's pretty darned old.

So it's Shakespeare country then?

The hotel itself (previously known as The Falcon) dates back to 1500 - so yes it's pretty historic. On the upside, the rather brutalist modernist extension is where you'll find all the newly refurbished bedrooms, so you get plenty of character when you're eating and drinking and comfort and all the mod cons when you're in the room. It's the best of both worlds really.

There are 93 rooms in total, some are in the Elizabethan bit at the front of the building, but most are in the modern wing. Our twin room was a decent size with a lovely bathroom and -  a nice touch - free coke and San Pellegrino orange drinks in the fridge along with mineral water. 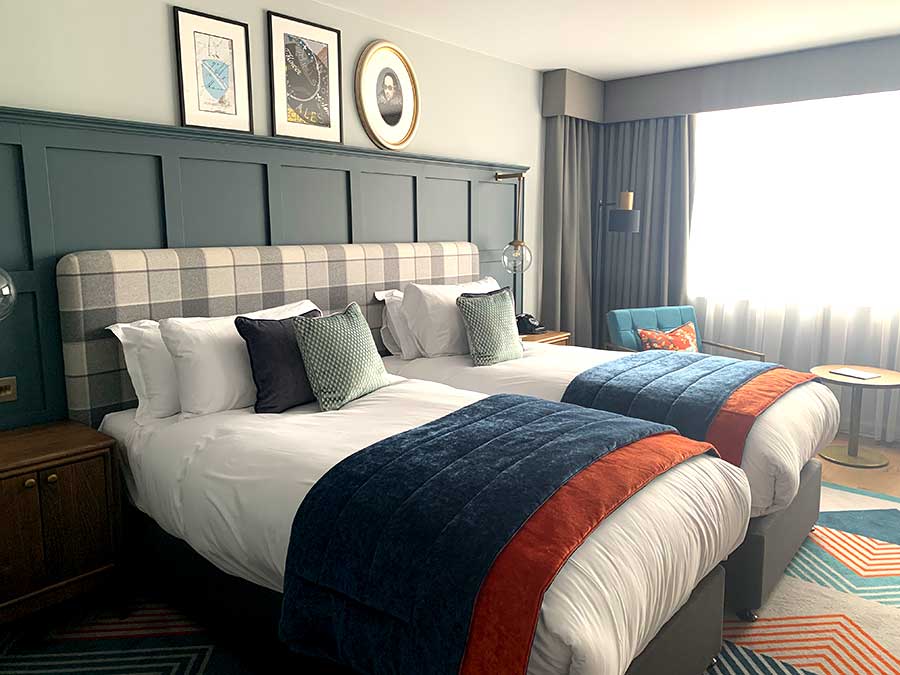 A twin bedroom in the hotel's modern wing.

Working up an appetite

Having dumped our bags, we took a circular walk along the river to Holy Trinity to check out the bard's grave, see his birth and death entries in the church's register and then head back towards the theatre. We also popped into nearby pub The Dirty Duck - a favourite with local thespians - which has a nice riverside pub garden. If you want to make a longer break of it here, there are four theatres in total, including the famous Royal Shakespeare Theatre.

The hotel has a range of lovely rooms to sit in before dinner - including a separate bar and tea room The Falcon. There's also a gorgeous courtyard garden which is a real sun trap and where we ordered a light snack when we arrived.

But what you really want - and which is only available in the dining room here - is a visit from the cocktail trolley. There's a range of champagnes to choose from, but we tried both an Elderwood Dry Martini (£10.50) and a Barrel Aged Negroni (£9.50) both of which were expertly made. It's a nice bit of tableside theatre too and apparently so popular they've already ordered a second trolley. 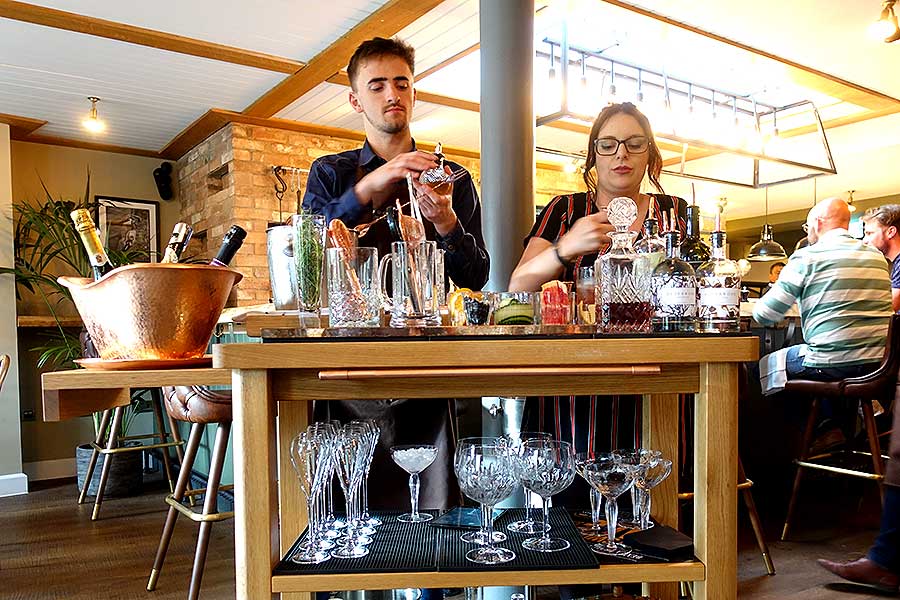 The Woodsman's marvellous drinks trolley - yes, you can park that right here.

The dining room is in two parts. If you prefer a bit of history you can sit in the oldest section, all panelling and mullioned windows. If you're after something a little brighter, or fancy counter dining, then the newer bit is where you want to be. That has large doors looking out over the garden and terrace. It's also where the open fire cooking goes on.

As for the food, you'll find a lot of game on the menu. Robinson runs his own venison business and the restaurant here has its own on-site butchery, so when they say farm to fork they really mean it. 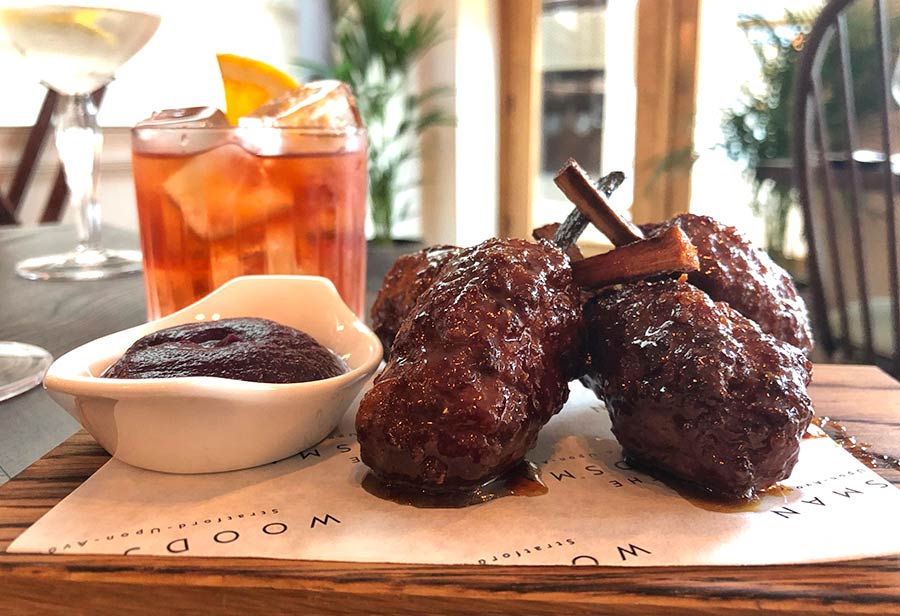 Muntjac lollipops with red cabbage ketchup (£5.50) - the bar snack you both need and deserve. 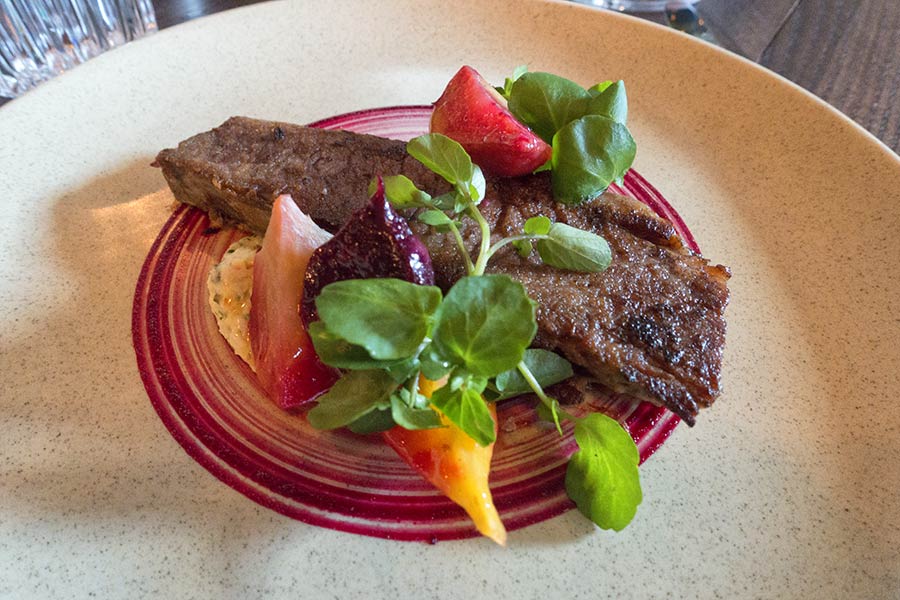 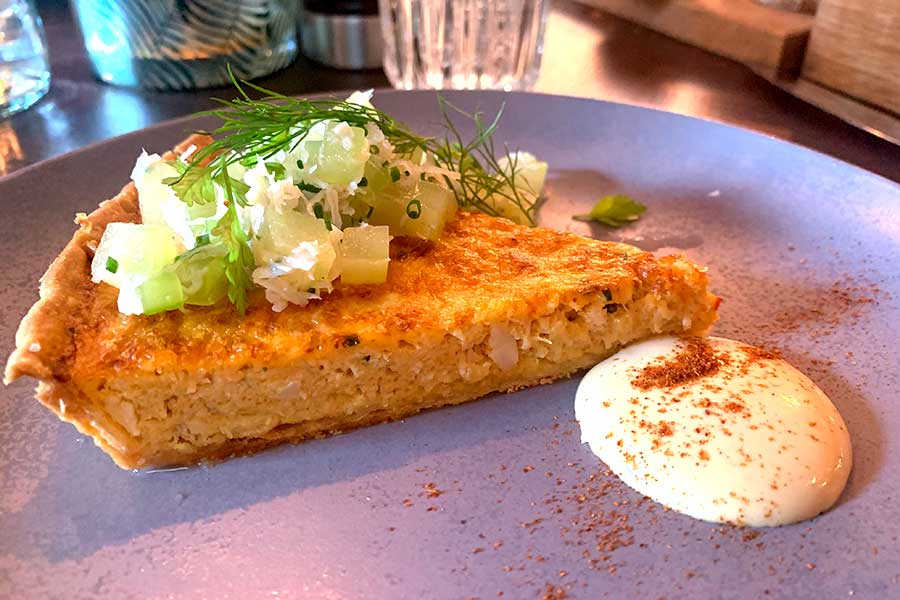 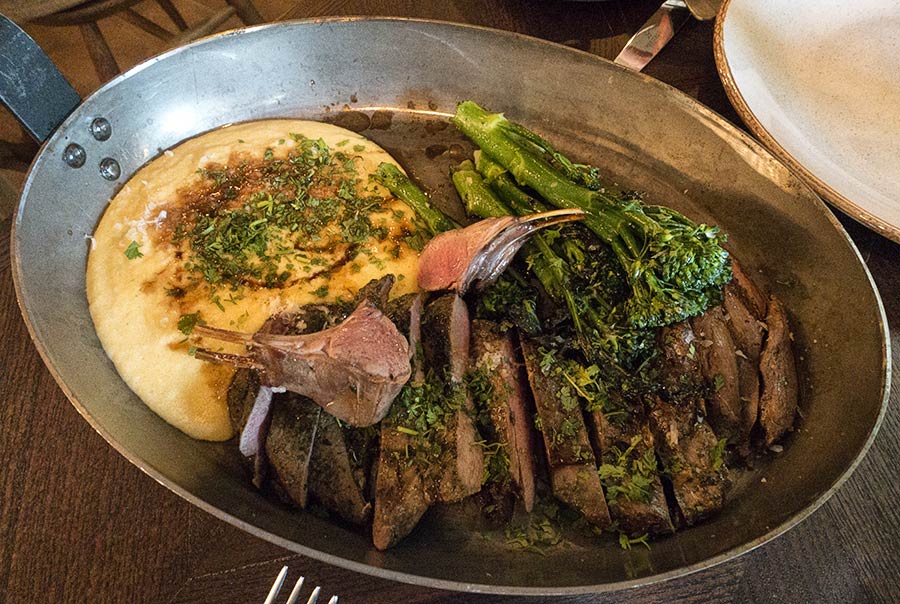 Butterflied muntjac haunch for two with parmesan polenta and grilled brassicas - £22.50 per person sharing. Such a super dish - beautifully cooked meat with utter comfort food polenta and the broccoli all smoky from the wood grill.

With all that focus on meat, what are the options for vegetarians?

From the main menu, the snacks section had cauliflower croquettes with piccalilli, there was a starter of spring vegetable salad with egg yolk, truffle and salad cream and the main veggie dish was grilled courgettes with broad beans, Berkswell cheese and sweet stem broccoli. But there's also a vegan/veggie menu available too. Pescatarians do best with seafood coming direct from the leading Cornish fisheries. 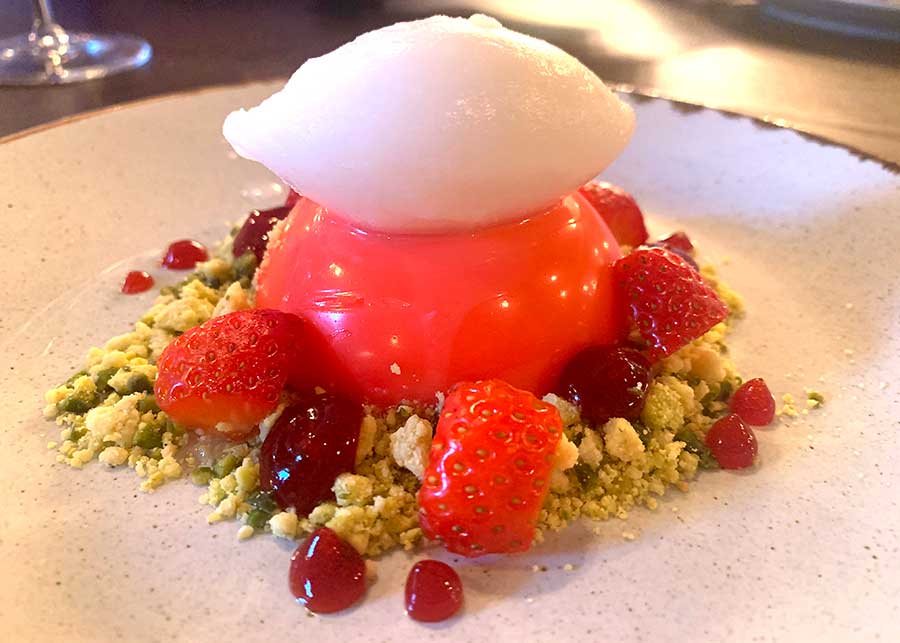 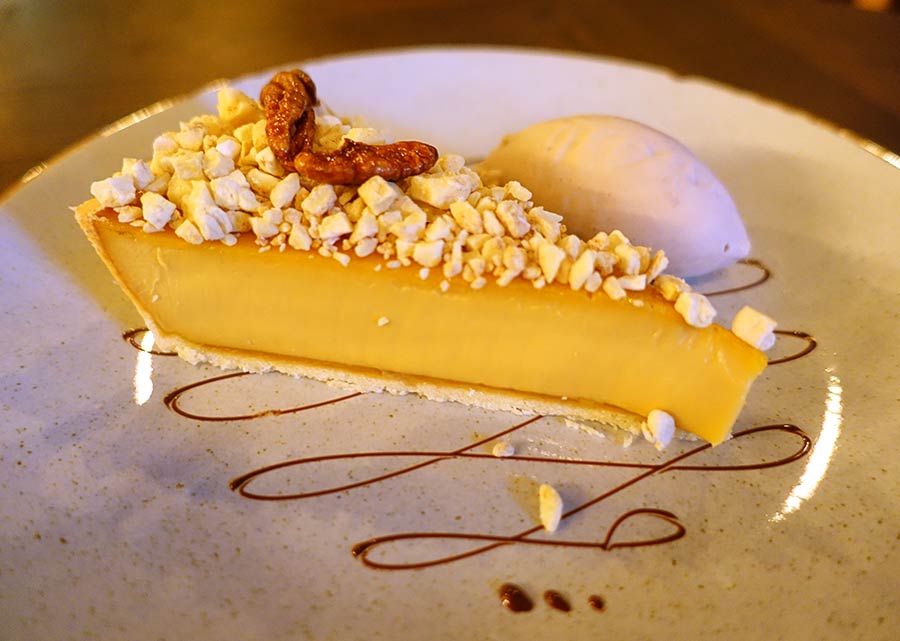 Banana caramel tart - once again, their pastry game is excellent, with the perfect just-set consistency to the tart. Amazing, up there with the best we've had.

After the highs of dinner, breakfast the next morning wasn't quite so successful. The buffet spread was generously laid out, but the pastries looked better than they tasted and both our cooked breakfasts came with overdone poached eggs. So, you might be better skipping that altogether and just popping out on the high street for something instead.

We were incredibly impressed with both the warm welcome at the hotel itself and also both the food and drink at The Woodsman. Even though it had only been open a week or so, things were running pretty smoothly. With this and Paul Foster's Salt on nearby Church Street, Stratford-upon-Avon's food scene has had a massive injection of creativity.

So if you're heading out of town for a weekend trip, or are there for an encounter with the bard, you now have an excellent place here to both stay and eat.

Hot Dinners stayed as guests of The Woodsman. Prices correct at time of publication.

More about The Woodsman

Where is it? 4 Chapel St, Stratford-upon-Avon CV37 6HA

How to book the restaurant: Book online.

How much to stay: The Indigo Stratford-upon-Avon has rooms starting at around £115 a night for a standard room.

Book a stay at the Indigo Stratford