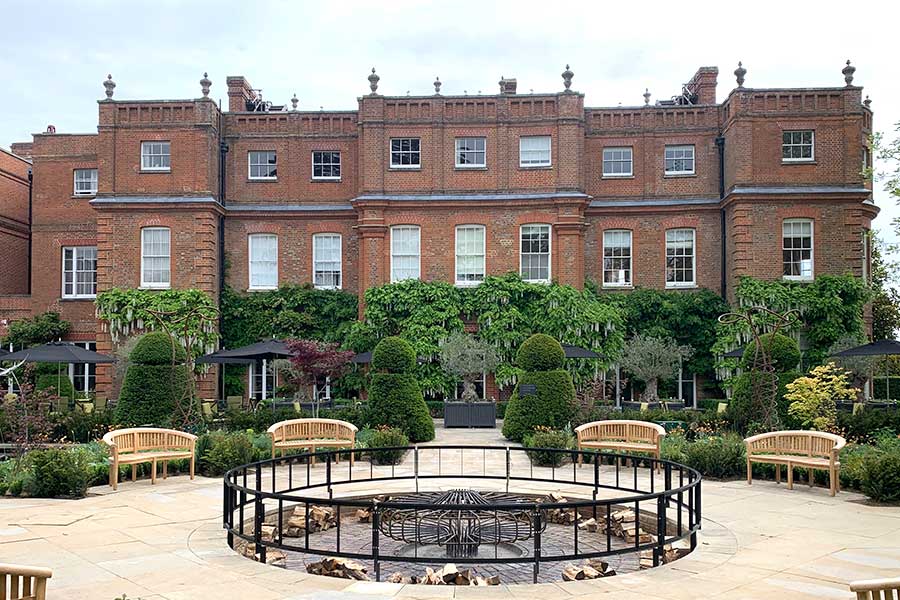 The formal gardens were just coming into their own when we visited with all the wisteria just coming out, and they're lovely to wander around.

When The Grove first opened its doors as a luxury hotel 15 years ago, it billed itself as being "London's Country Estate". Set in 300 acres of stunning Hertfordshire, the house used to be home to the Earls of Clarendon and was variously a girl's boarding school and British Rail training centre, in its more recent history. It's now a luxury hotel, the kind of place where golf tournaments and G20 summits are held.

You'll find it just outside Watford - 18 miles from London. It's a particularly easy minibreak or overnight destination for Londoners. We drove and it took us barely 45 minutes from North London, but it's just as easy to get to by public transport - just a 10-minute taxi from Watford Junction.

If you're a gas guzzling oligarch you can arrive by helicopter, or if you're an eco-warrior take a canalboat - the Grand Union Canal comes right through the grounds here. 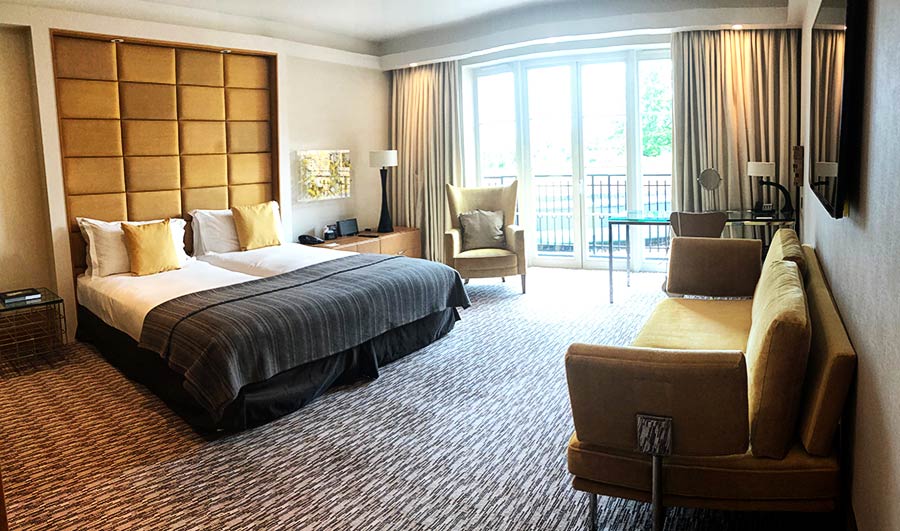 Where we stayed - the West Wing Deluxe Twin room.

Rooms are split into two key categories - those in the original part of the house and those in the modern West Wing. Those in the main house are more eclectic in design, We were in a West Wing Deluxe Twin room which was particularly spacious and featured a mini balcony looking over the gardens. The bathroom with its roll top bath was stocked up with lovely ESPA toiletries and the minibar - should you wish to plunder it in the middle of the night - was stocked with popcorn, Red Bull, their own Pale Ale, salted caramel fudge - you name it,

Working up an appetite

With so many grounds, plus a championship golf course and a massive gym and spa there are loads of ways to ways to either de-stress here or work up a sweat.

There's a huge indoor pool, dramatically tiled in black, as well as - our preference as long as it's not being dive-bombed by loads of kids - a gorgeous outdoor pool in the hotel's walled garden. Although check in isn't until 3pm, you can arrive at 1pm and take full advantage of the hotel's facilities. 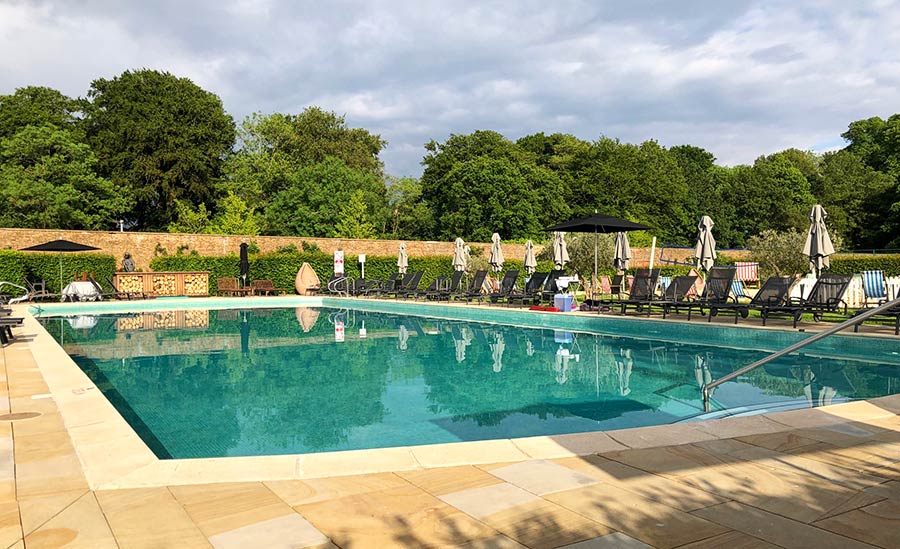 The outside pool. If you have it to yourself like this, think yourself very lucky indeed. You can pretend you own the property...

We tipped up early enough to have a quick lunch at The Stables, the golf clubhouse restaurant for The Grove. There's a large restaurant here - perfect for families - serving up steaks and standard gastropub fare. And there's also a pub which is where we enjoyed a particularly good bay-spiced fried chicken burger and very friendly service.

They're booking now for an event with world famous Tuscan butcher Dario Cecchini who'll be cooking a nose to tail menu there in August. 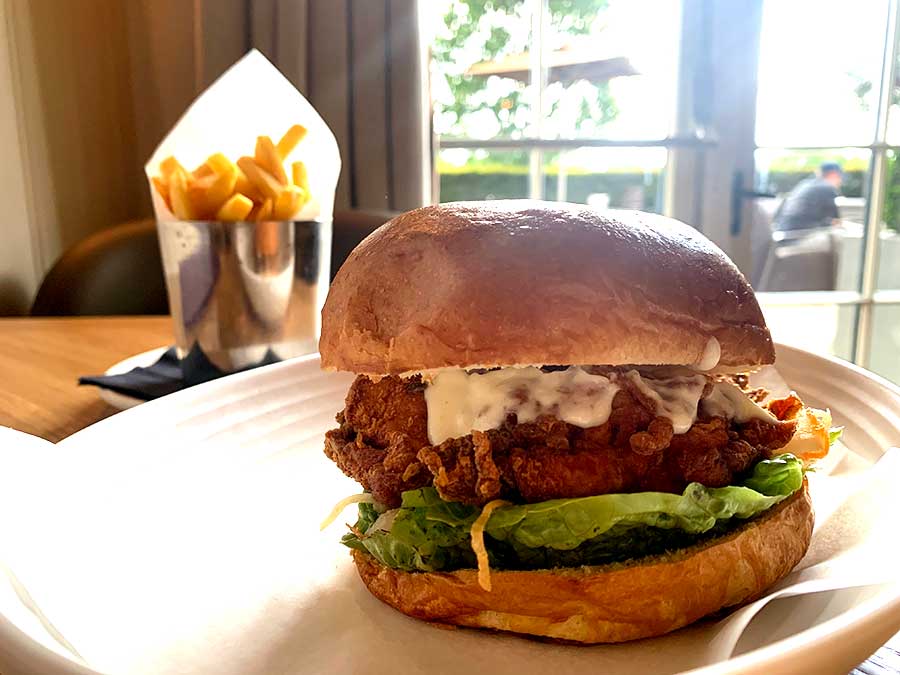 A really good chicken burger in a brioche bun with slaw (£13).

Having wandered around the extensive kitchen gardens earlier, we were excited to try the Garden to Glass cocktail menu which boasts plenty of garden-grown botanicals.

But while our Here Today Gone Tomorrow (£14) featuring gin, gooseberry, pear, tarragon and nettle, was a refreshing aperitif, our other drink - the 1720 with tequila, mezcal, cardamom, pink grapefruit and flower salt (£15.50) - wasn't that great. You'd be better off perhaps sticking to the wide range of wines by the glass instead. 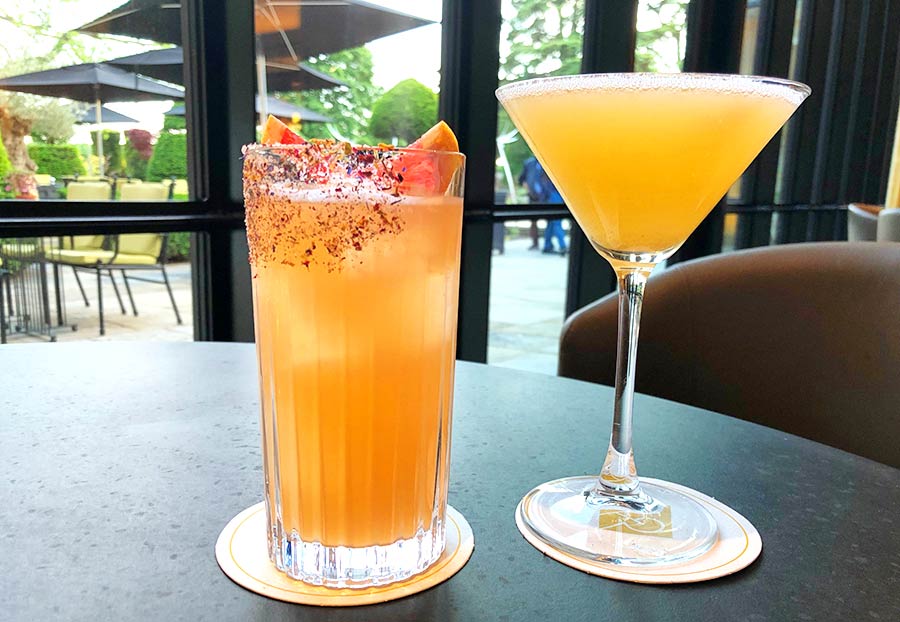 Cocktails in The Glasshouse bar

We were at The Grove to check out their new-look Glasshouse Restaurant which had opened just days before, following an extensive renovation. They've annexed part of the gardens to create a conservatory section - making it now an actual glasshouse - as well as changing things up in the restaurant itself. Here's how things work there... 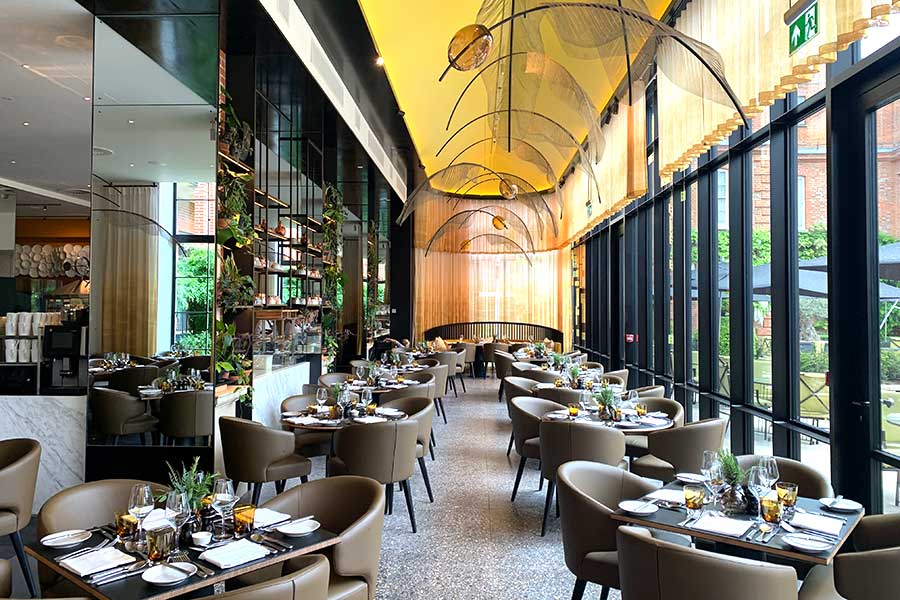 The newly-redesigned Glasshouse Restaurant at The Grove - yes it does look rather nice. 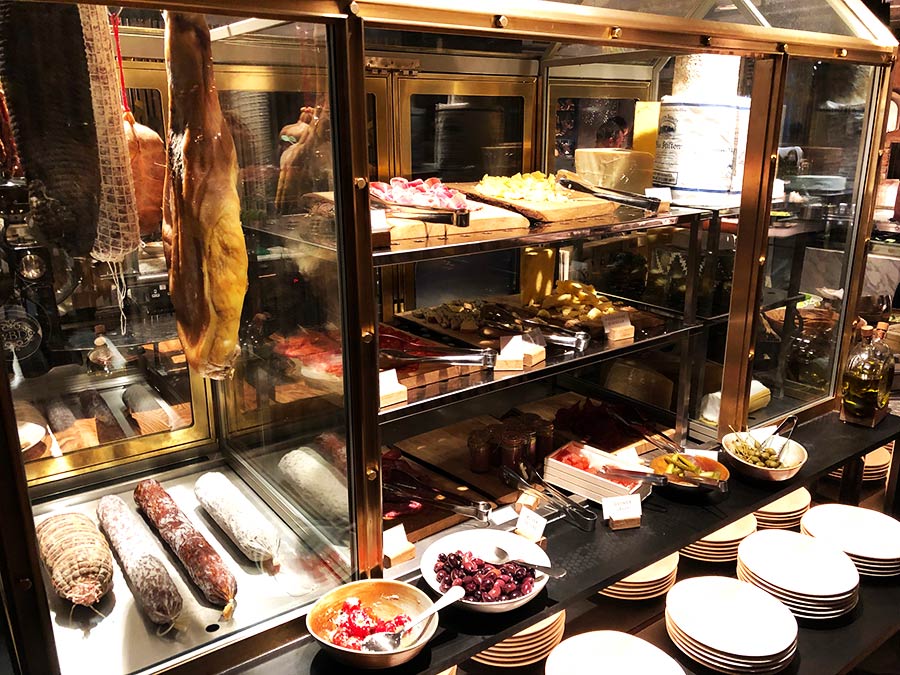 The Glasshouse has always been a buffet style operation - serving up everything from sushi to stir-fries. But now, with the original hotel chef Stephen Wheeler back in charge, it's undergone a bit of a South East Asian makeover - with loads of live food stations cooking food to order. Plus there's this whole section of meats and cheese. 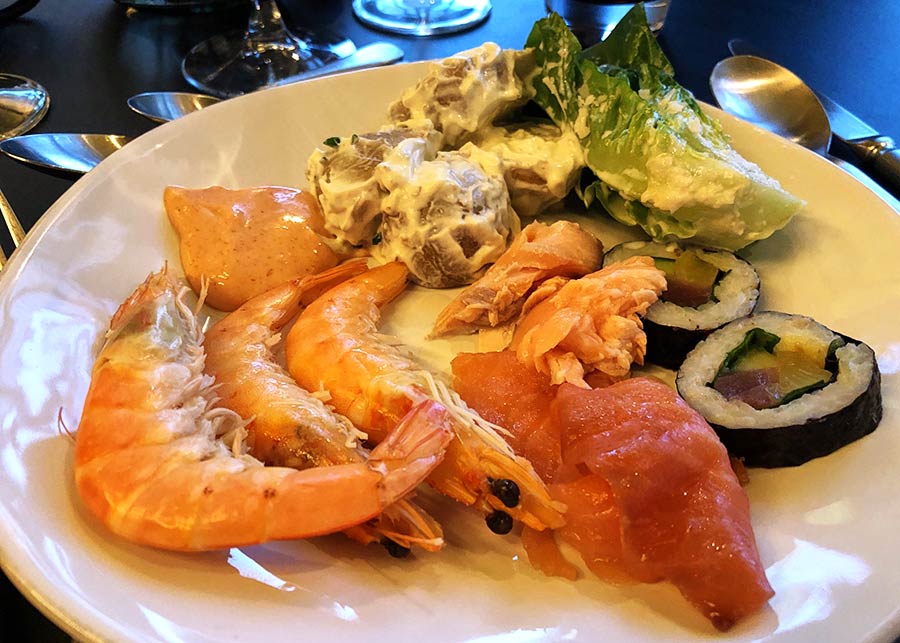 The Crustacean Station was serving up excellent prawns, smoked salmon and sushi. This was our restrained haul - we really should have gone double on the prawns, looking at this. We see that now. 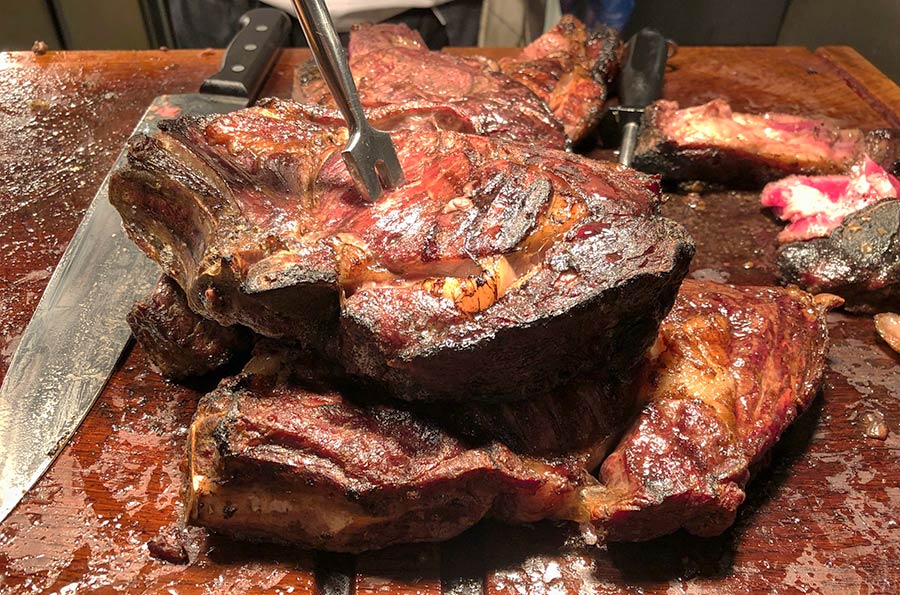 The beef counter - and the main carvery attraction. God, we love a carvery and this was VERY good. Honestly tempted to come back after eating our portions and ask "can we have the rest, please"? They have a Tandoor oven too. 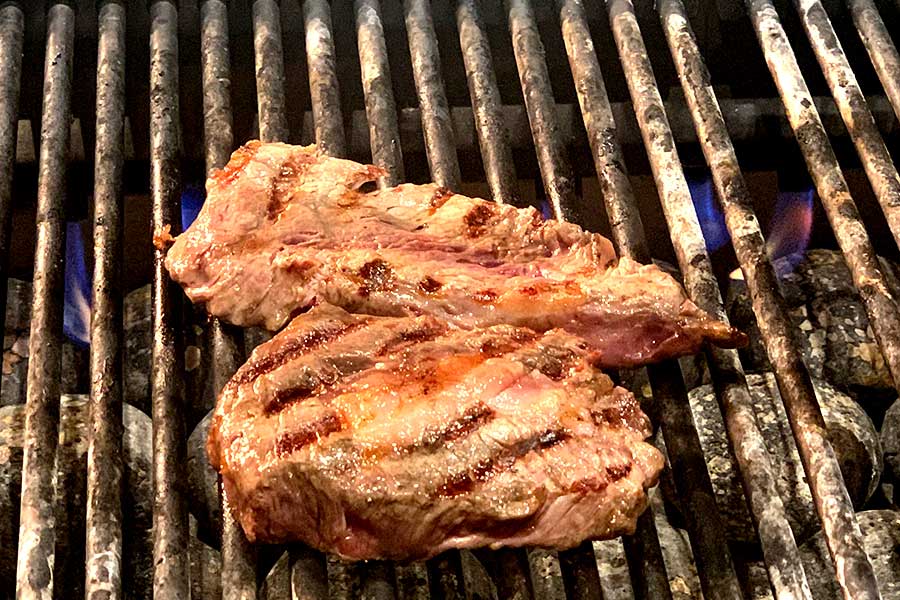 Chucking some steaks on the robata grill.

We were particularly impressed with the quality of the steaks and roast beef here - all the meat comes from Scottish craft butcher Donald Russell. And of course, most of this is self-service but the front of house staff here are worthy of mention - they were such a cheery helpful bunch.

Desserts include a special ice-cream sundae station (although they're missing the essential glass dishes here) and loads of great British cheeses.

The Glasshouse is also where you'll have breakfast the next day... 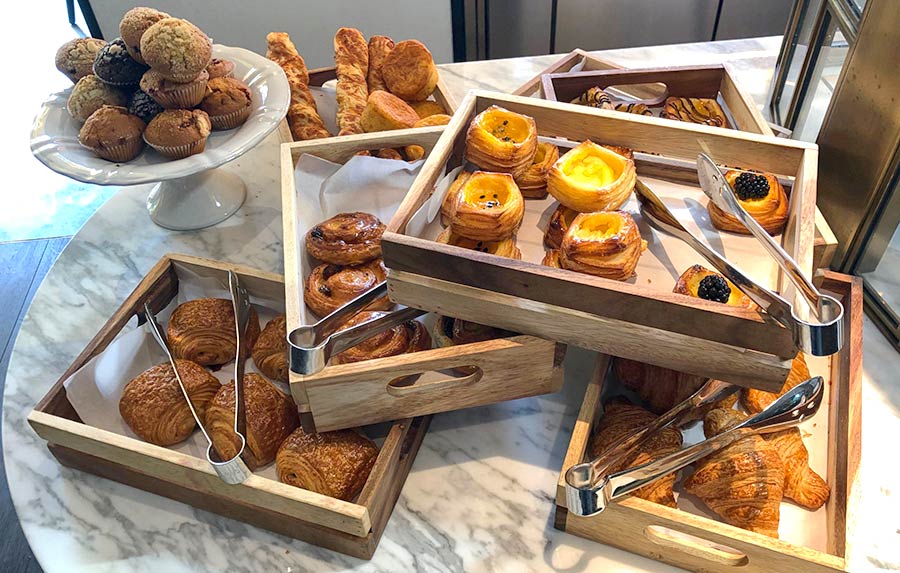 As you'd expect - breakfast goes down the self-service route too. We really loved our pastries - including some very nice fruit muffins and poppyseed madeleines. And the selection was pretty decent. 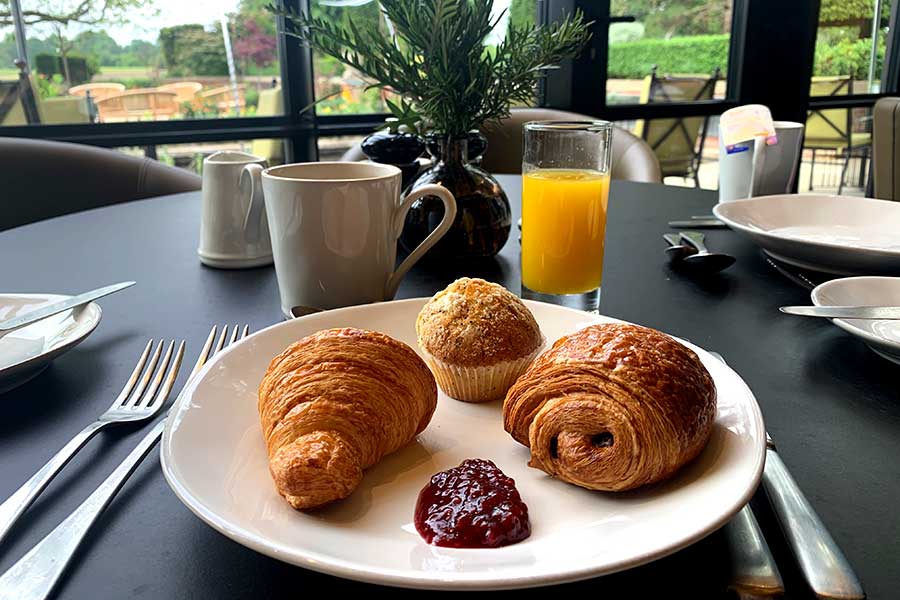 Breakfast round one - this was followed by a full English, of course.

If you need a quick decompression from London life, then dashing up for an overnight stay at The Grove is just the ticket. It's so close and a particularly fine spot during summer when additional activities include a pop-up restaurant in the Walled Garden's Potting Shed and the Everyman are running an outdoor cinema here too. The outdoor pool is a real attraction and the main buffet restaurant really is a cut above the norm.

More about The Grove

Where is it? Chandler's Cross, Hertfordshire, WD3 4TG

Book a stay at The Grove