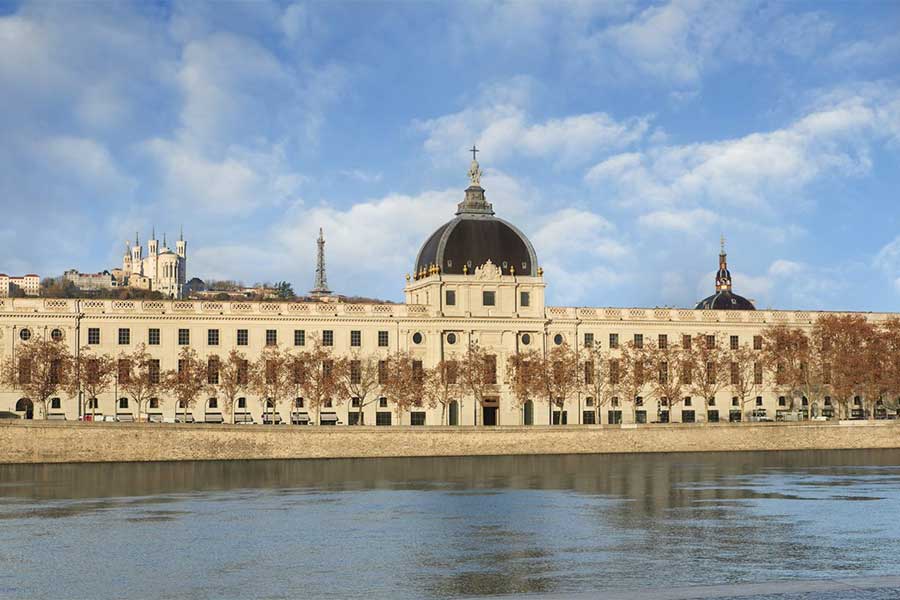 No, it's not a presidential palace, this is the actual hotel on the banks of the Rhone in Lyon.

This is not an ordinary hotel. The Grand Hôtel-Dieu is a UNESCO World Heritage site that has had quite the makeover.

For starters, the place is properly old. It was built on the banks of the river Rhône in Lyon way back in 1184 by the frères pontifes where it began life as a place for travelling clergy to stay. For 800 years, Hôtel Dieu was the main hospital of Lyon, closing only in 2010 (which means that many of today's Lyonnais people were born here). This is where Rabelais worked as a doctor in the 16th century, writing his classic books Pantagruel and Gargantua.

The Grand Dome - which now houses the hotel's bar and can be seen from all over Lyon - was built in 1764, destroyed during the liberation of Lyon in 1944 and rebuilt in the Sixties. It is impressive, historic and one hell of a place to stay. 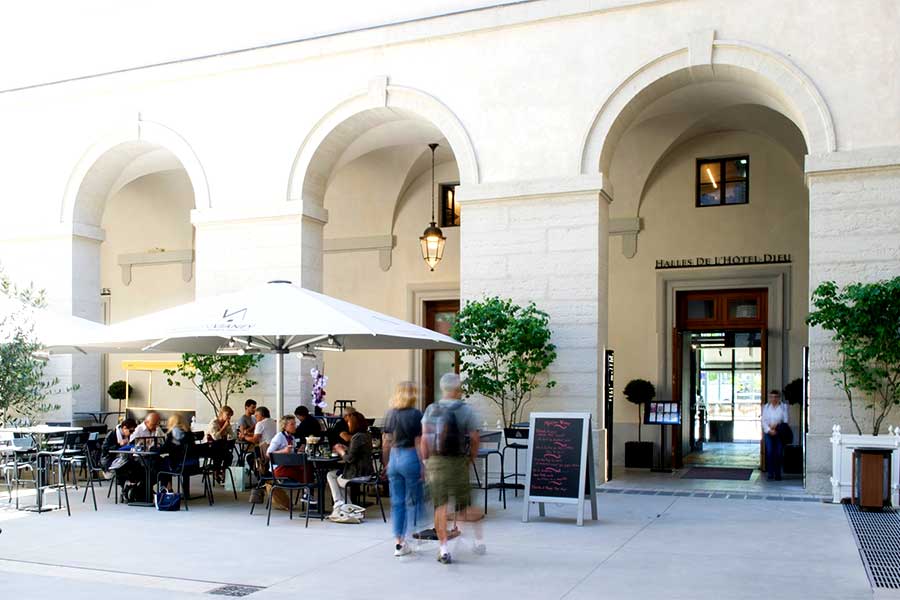 Just one of the many cafes tucked into the cloisters and courtyards of the Grand Hôtel-Dieu.

Is it all a hotel?

A whopping part of it is, yes - the InterContinental Lyon - Hotel Dieu which is where we stayed. But the huge structure, with its 375-foot riverside facade, is now also home to offices, shops, restaurants and bars as well as some lovely courtyards and gardens.

This Autumn, it becomes an even bigger draw for foodies when The International City of Gastronomy opens here. That'll be loosely split into three areas; an immersive museum, an exhibition area for temporary exhibitions, and a hub for discussions about gastronomy and healthy eating. 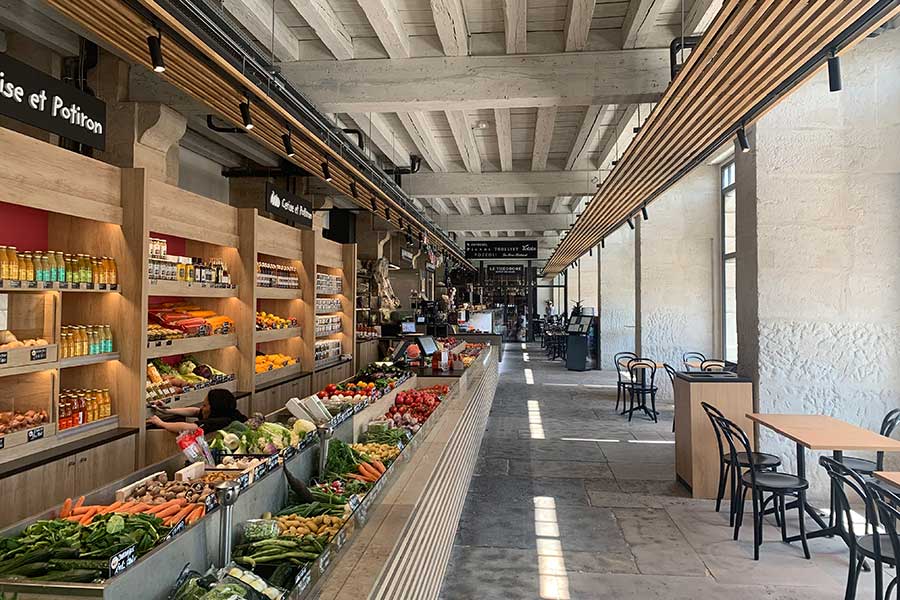 Right now, you can enjoy a drink in the old cloisters and wander through Les Halles du Grand Hôtel-Dieu - which houses some of Lyon's best artisan food producers and restaurants - Pignol for patisserie, Pozzoli bakers, the butchers Trolliet, fish from Vianey, a restaurant Le Théodore, cheese from the world-class La Mère Richard, fresh produce from Cerise & Potiron, chocolate by Voisin and, finally, there's a wine shop by Guyot.

There's also a branch of Sushi Shop, a restaurant in the old refectory by Michelin-starred chef Marcel Ravin called Le Grand Refectoire and numerous other bars and cafes.

OK, so let's check into the hotel.

Intercontinental opened their hotel here in June after a four-year restoration, bringing in interior designer, Jean-Philippe Nuel to give their section of the historic building a luxury modern makeover whilst still being 'rooted' in its history. You can enter via the courtyards of the Hotel Dieu or from the banks of the river. 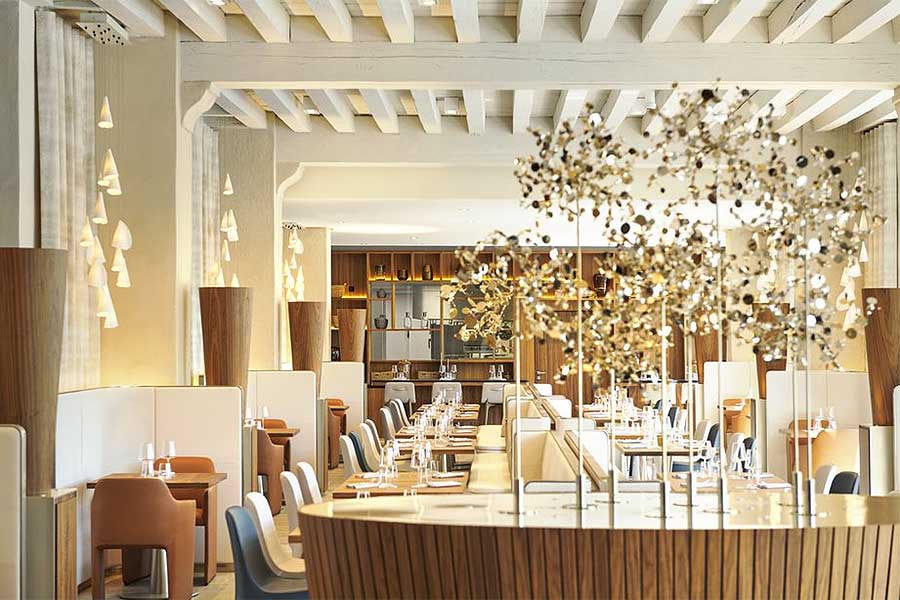 Presumably, the rooms are rather gorgeous?

They are. There are 144 in total. 34 are suites, 28 of those duplex with huge vertical windows with views on to the Rhône river - and we were lucky enough to be staying in one of those. You enter on the mezzanine floor with a lounge space before heading downstairs to where the huge bedroom and bathroom are. It's rather nice to wake up in the morning, flick the electric switch and have the curtains open giving you an amazing riverside view over Lyon. 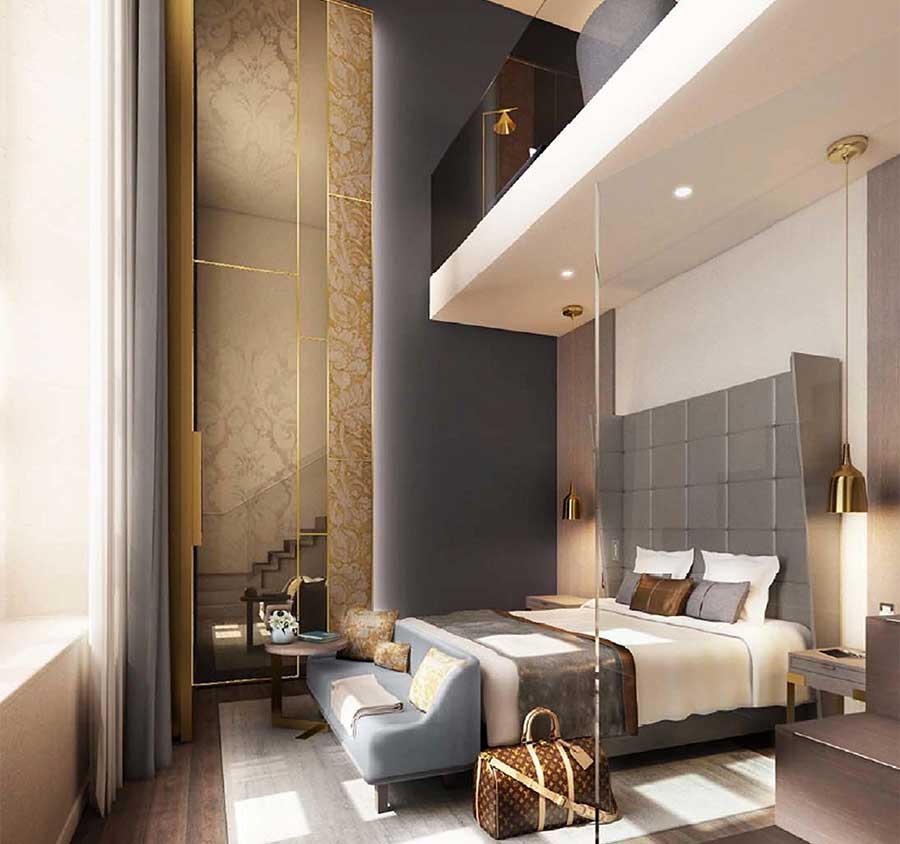 The Duplex river view suite at the IHG Lyon.

Believe us when we say this may be the most jaw-dropping bar we've ever had the pleasure to sip a cocktail in. Built in the former chapel, the bar's piece de resistance is Le Grande Dome (designed by Jacques-Germain Soufflot, architect of the Pantheon in Paris). This soars 105 foot high and is utterly mesmerising. If you can drag your attention back to your drinks, the drinks list reads beautifully. Cocktails range in price from 16 to 20 euros. 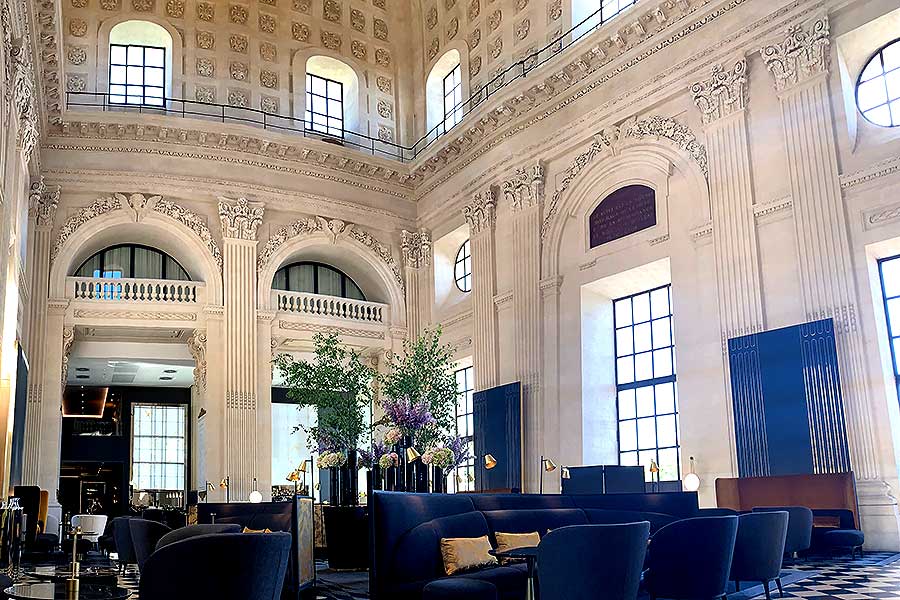 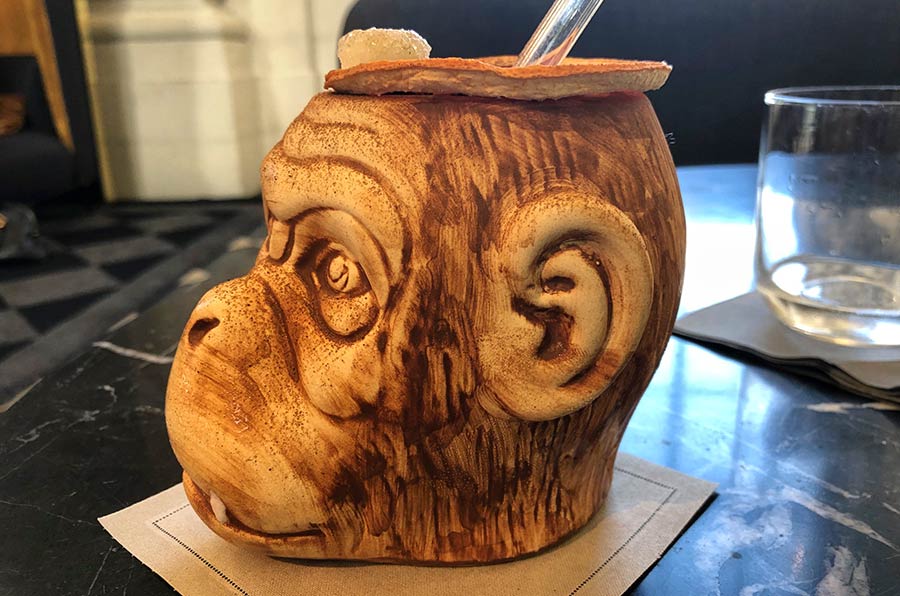 Our Boomerang cocktail featured a clarified milk punch with Havana rum, apricot liqueur, apricot eau de vie and sherry but was somewhat overshadowed by the Zombie Tiki which is lit up at your table topped off with some sort of combustible sparkler dust. Check out our Lyon highlight on Instagram for the video.

Epona is in a lovely spot in the hotel. At the front, the modern dining room looks out over the river, at the back there's a courtyard and garden which - if the city hadn't been in the grips of a heatwave when we visited - would have been a super spot to dine.

The Head Chef here is Mathieu Charrois who trained under Michel Troisgros and Yannick Alleno. Here, he's taking classic Lyonnais dishes and giving them a lighter, more modern interpretation. So yes, there's Tete de veau and quenelles, but in dishes not quite as heavy as you might encounter them elsewhere in Lyon. Here's what we had: 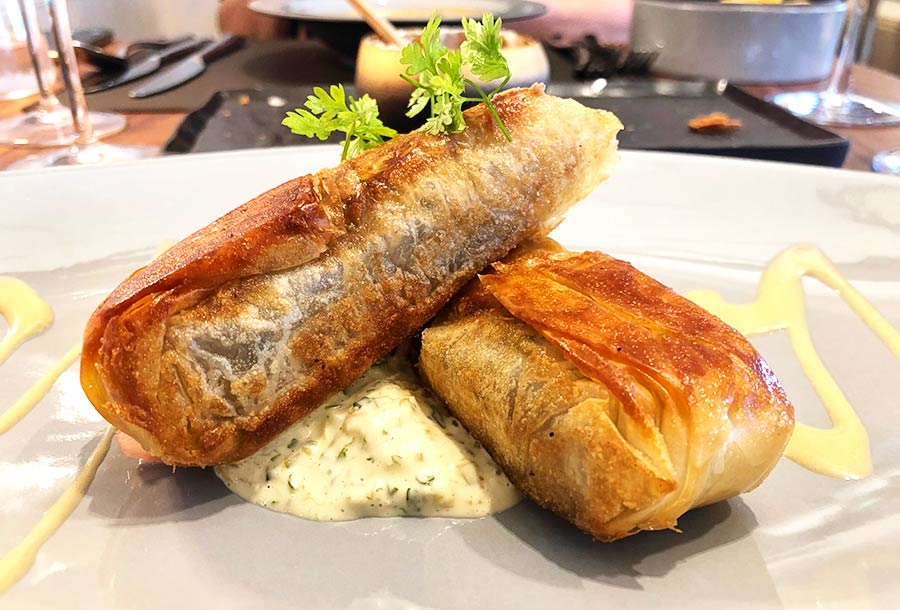 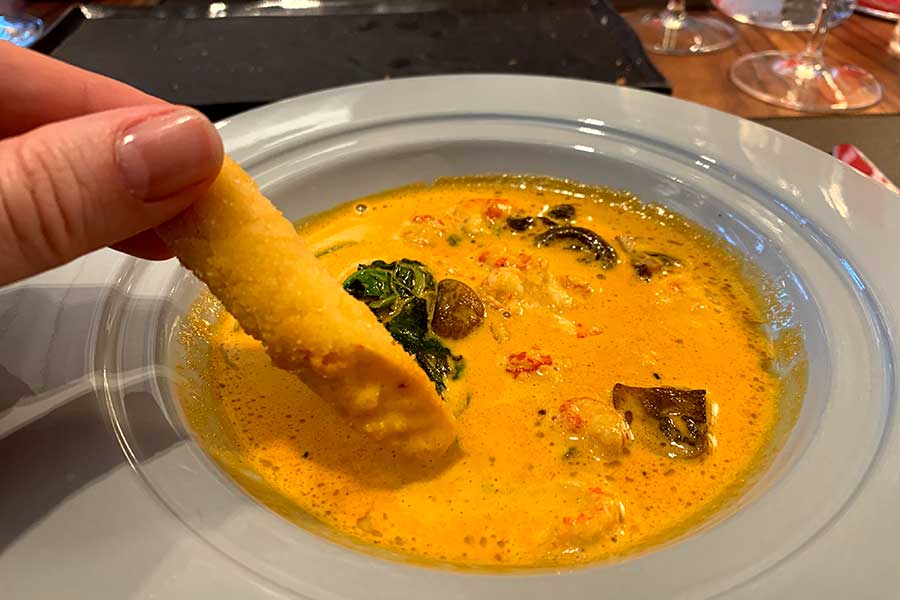 There is a variety of mains to choose from, but we spotted a whole section devoted to 'cocotte dishes' so we went for: 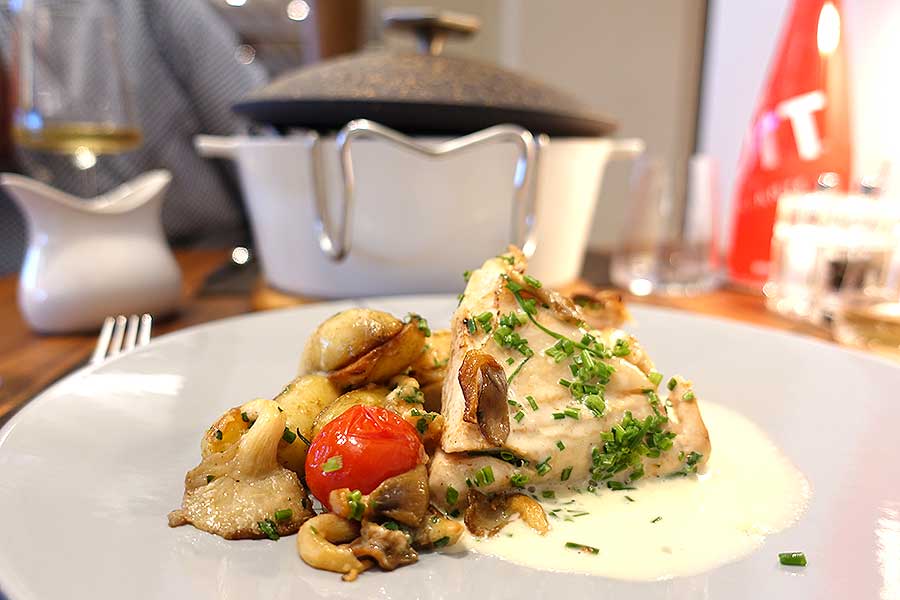 Bresse chicken in a vin jaune with sauteed King Trumpet mushrooms and a LOT of cream (28€ per person).

After all that we were rather full, but we still somehow managed to share a dessert: 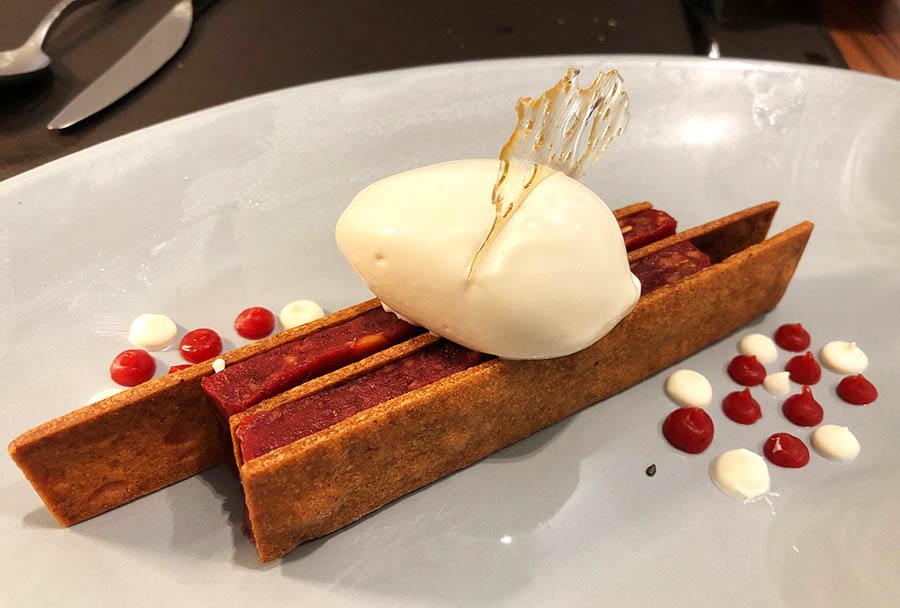 Praline tarte with almond ice-cream (14€) made with the traditional pink Lyonnais praline.

We can't think of a better spot to stay at in Lyon, if you have the funds, than the InterContinental Lyon - Hotel Dieu.

Not only is it part of the very historical fabric of the city, but it's now the bona fide centre of what's new on the gastronomic scene here. It's a super hub for any foodie wanting to visit this wonderful city and comes highly recommended from us.

Hot Dinners stayed as guests of the InterContinental Hotel Group. Prices correct at time of publication