48 hours travel guide to Barcelona: the best places to eat and drink in the Catalonian capital

Barcelona is a crazily popular city for a mini-break as far as the British go. Pre-pandemic three-quarters of a million of us visited the Catalonian capital every year. Combining culture with culinary gems it's an ideal place to spend a few days but you need to spend that time there wisely. Following our recent trip, we've pulled together a two-day itinerary of bars, attractions and restaurants to make the most of your visit.

Ahead of your arrival, go online and order yourself a Hola Barcelona card which lasts between 2-5 days depending on what you’re after. This covers all metro and bus journeys and, crucially, the journey in from the airport. Pick your pre-ordered card up from the machine in the airport’s metro station and you’re all set.

Once you’ve dropped your bags at your hotel head out for a spot of culture. We booked tickets ahead for the relatively new Moco Museum of Modern Art which opened in October 2021. This is a perfect spot for a quick smattering of culture. You can do the gallery in about an hour and it includes works from Basquiat, Banksy, Warhol and more. Make sure to look out for the final tucked away mirrors and light installation. We thought this was actually much better than the recent ever-so-overhyped Mirror Rooms at the Tate (with no waiting, either). 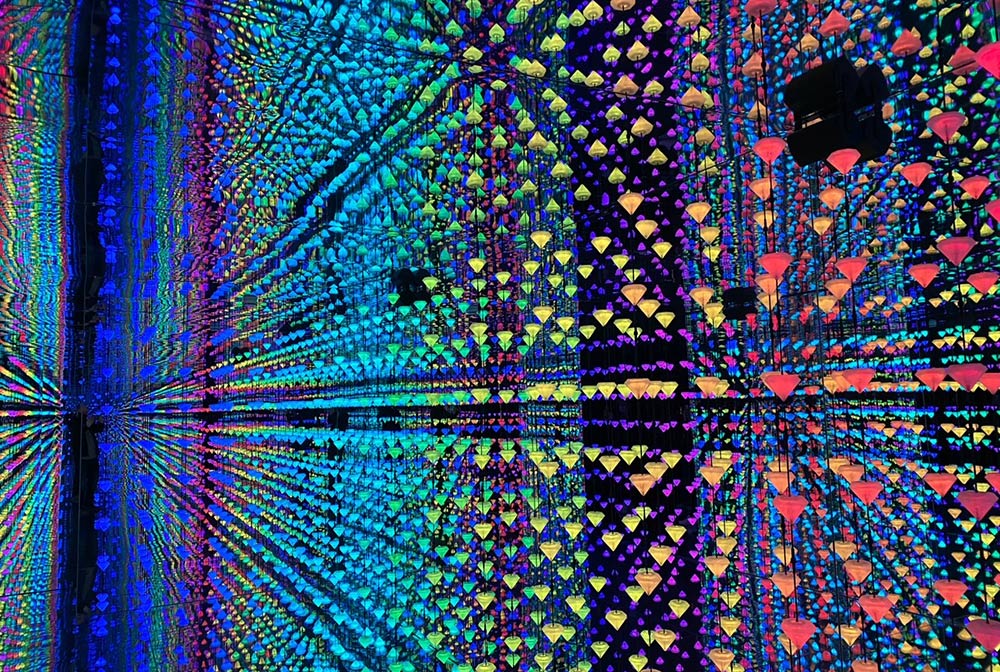 The light and mirror installation in the Moco Museum. Yes, there is a floor and ceiling in here somewhere.

If, like us, you never made it to Albert Adria’s Tickets when it was open, then a trip here should be on your to-do list. Head chef Fran Agudo (ex-head chef of Tickets) says that dining at his Eixample tapas bar is ‘fine dining in a bar’ so expect a menu packed with the most extraordinary ‘snacks’. It’s the perfect place to ease yourself into Barcelona’s food scene on your first night.

Dishes might include cockle souffle, triangles of beetroot with eel and caviar or - one of our favourites, a teeny chicken skin sandwich with fresh squid as the filling. Then there were slightly larger ‘mains’ including the must-have ventresca tuna belly smoked with pine nuts and served in a dome filled with smoke.

The extensive wine list is largely Spanish (with a few European additions) and we’re still dreaming about a particular glass of 20-year-old cream sherry that was served up. The service is clever and friendly and there was a nice mix of local and gastro tourists like ourselves in there. There’s also a particularly nice table for a group booking if there’s a gang of you in town.

Here's a taste of what's on offer: 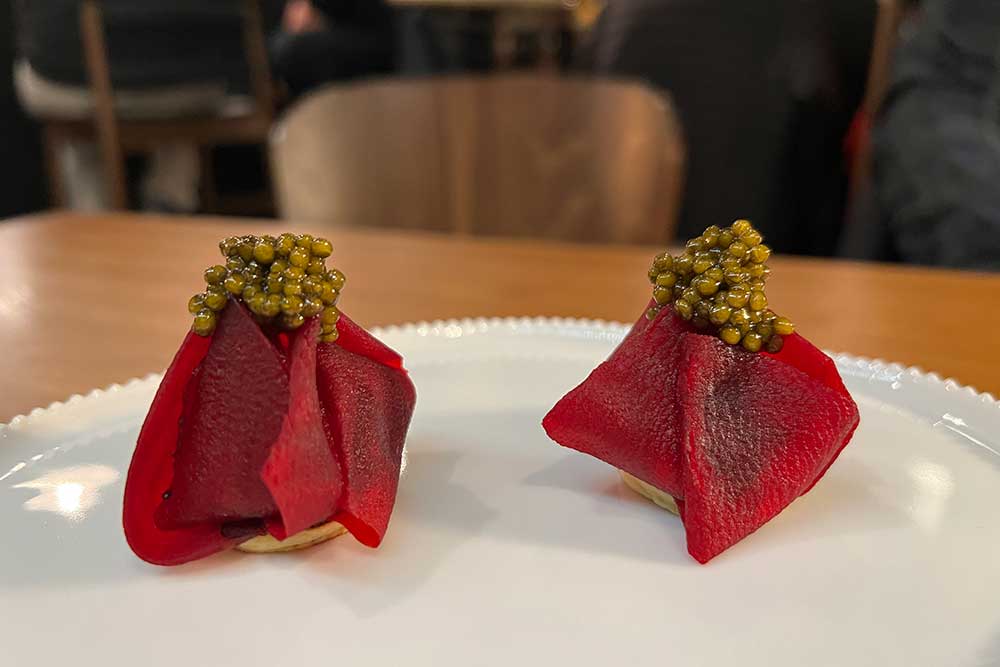 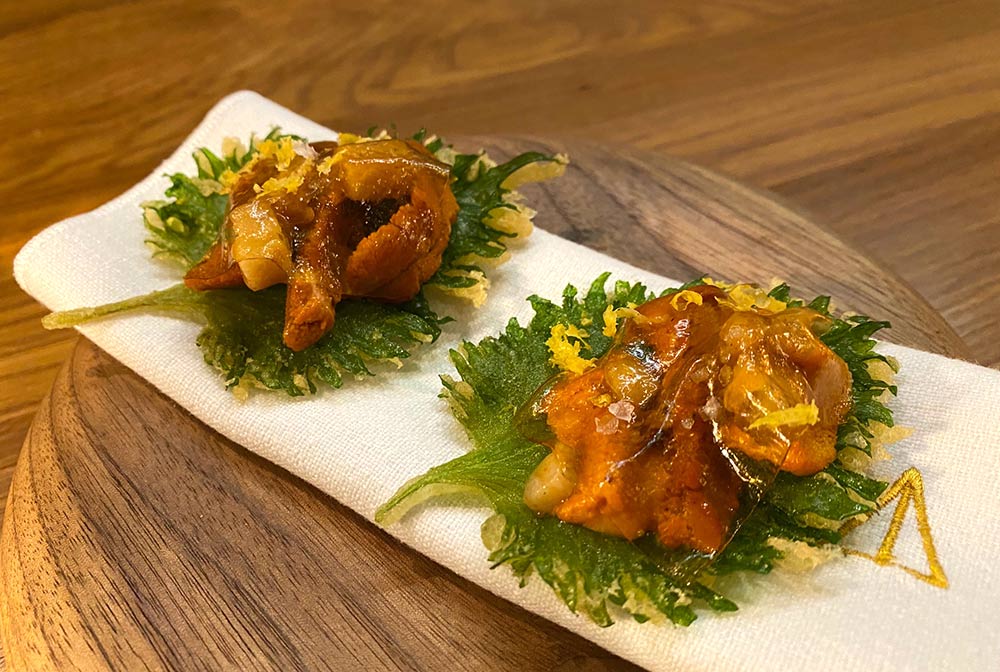 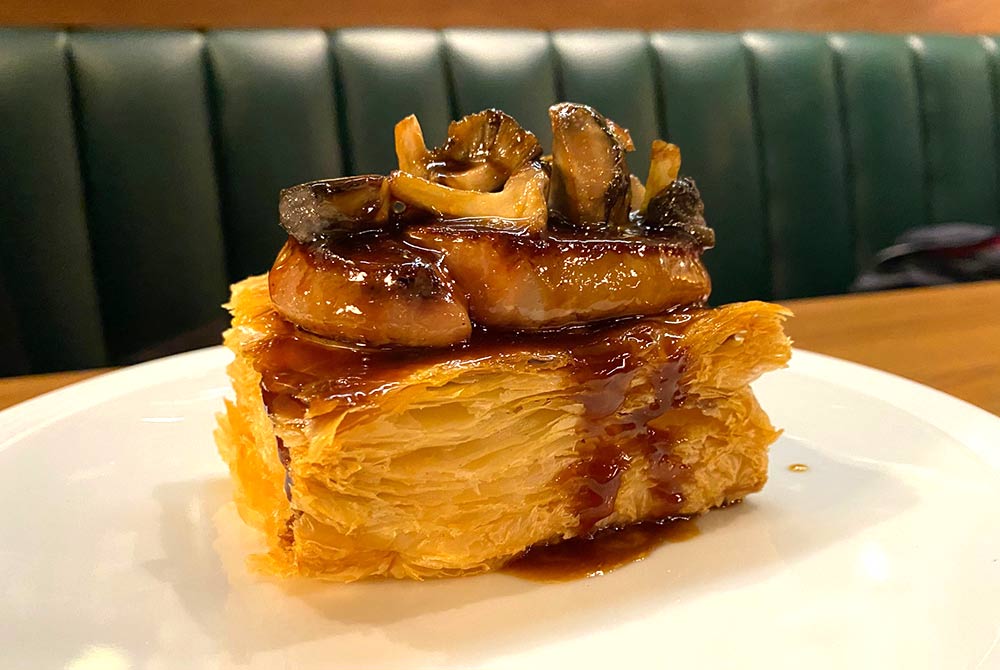 Foie gras and Marzuelo mushrooms on a bed of puff pastry and covered in sage sauce. 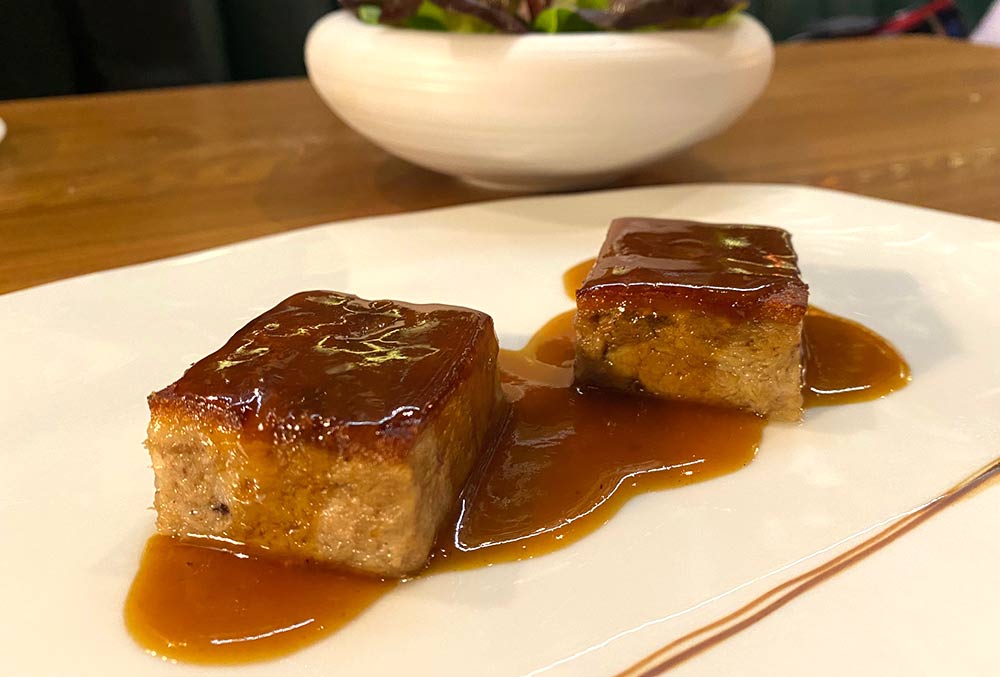 If you can’t secure a booking at Mont Bar, it’s also worth trying Media Manga next door which is also run by the same team.

As our hotel was down in the El Raval district we had a number of bars to choose from. La Confiteria was probably our favourite, a lovely atmospheric cocktail bar which, as the name suggests, used to be an old sweet shop. Nearby another good spot for late-night drinks and a snack is natural wine and tapas bar Denassus. 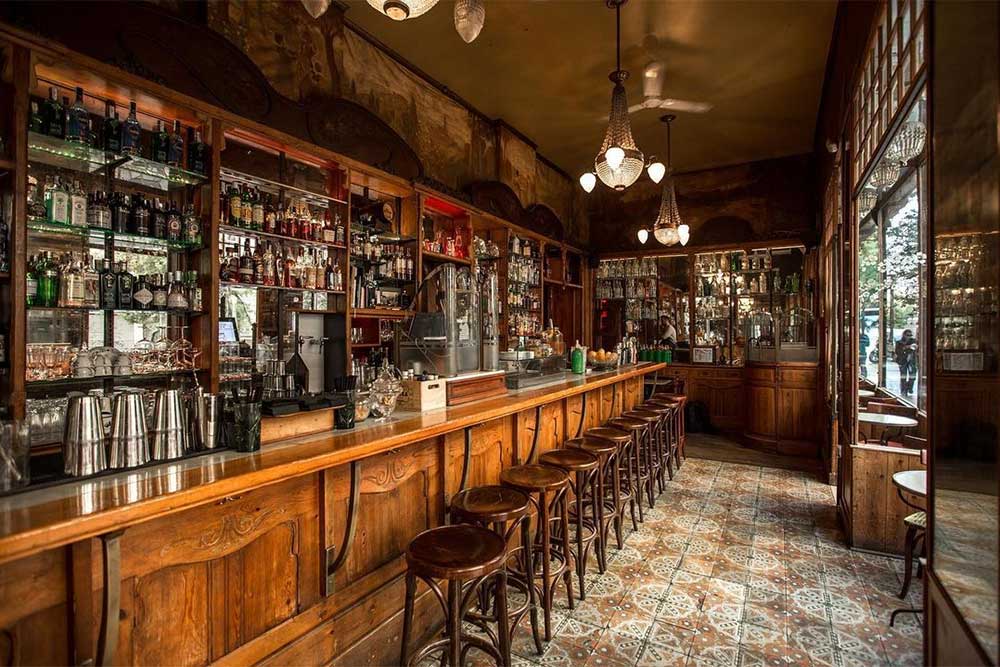 Obviously, you can’t make a trip to Barcelona without seeing what is clearly one of the wonders of the modern world. It had been a fair while since we’d last been inside Gaudi’s iconic cathedral-in-progress and we were surprised to find it now in the very last stages of building. One of the last spires has just been unveiled and work continues apace on the final central spire. Inside, on a sunny day with sunshine pouring in through the stained glass windows, it provoked an emotional response that would have made the architect proud.

Tip: Make sure to book your tickets ahead online to save having to join the long queues on arrival. 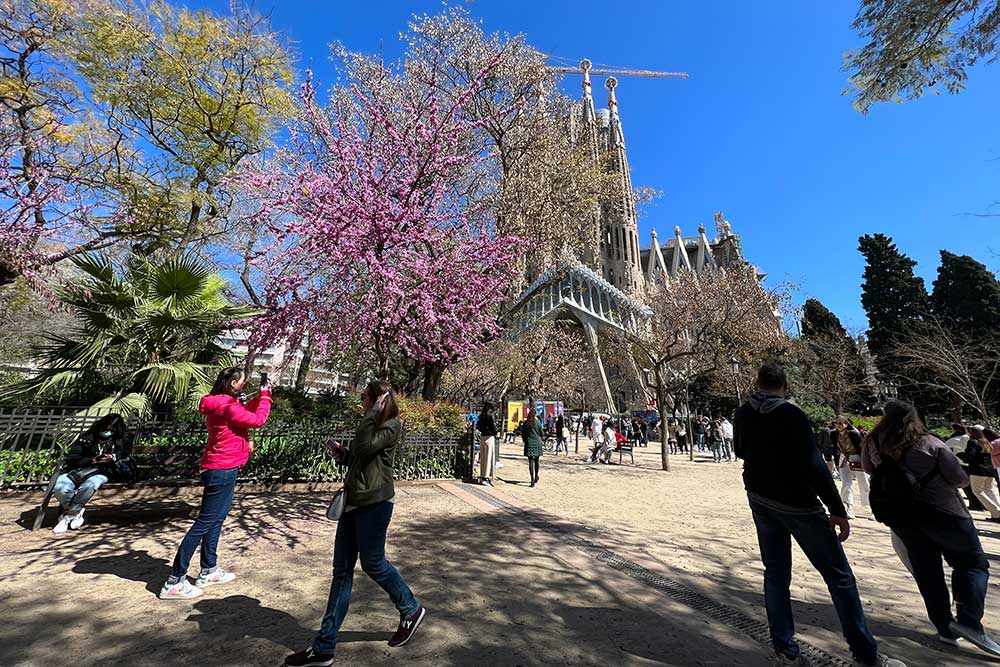 An awful lot of people had recommended this tapas bar to us - it’s probably today’s equivalent of what Cal Pep used to be a decade ago. Your first step will be securing a booking. They don’t take reservations for the counter, which is clearly the best place to be, but there’s a lot of high top seating at the back and there’s even a section that you have to access through the kitchen which is where we were, sat between a slightly bemused Dutch couple and a bubbly table of lunching Septuagenarian Barcelona ladies (life goals right there).

The menu - on their website this is the button marked compellingly ‘fuck your diet’ - looks at first glance to be classic tapas, but then there are the clues that you’re in for a treat. So there’s aged beef tartare with chips and Galician baby scallops with bellota ham. We felt compelled to get the squid sandwich, which was memorably delicious, along with a heaped plate of Russian salad and a very decent tortilla. 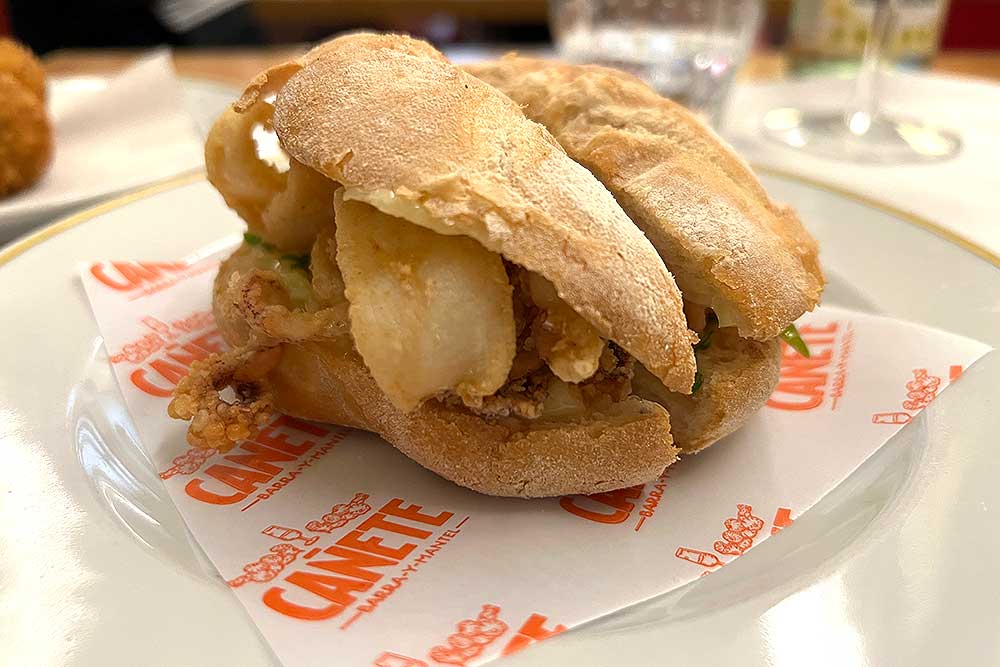 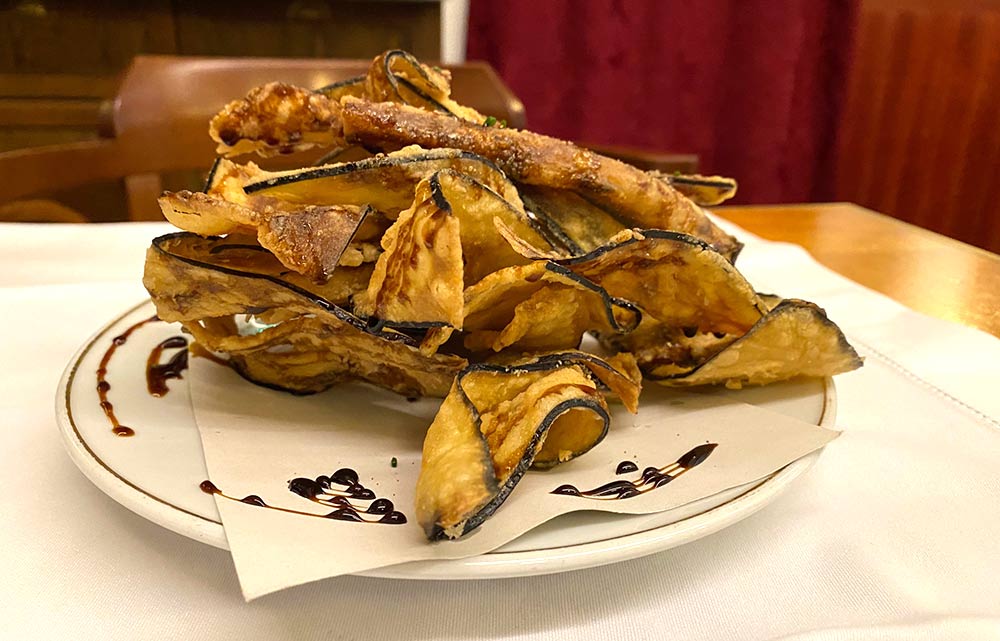 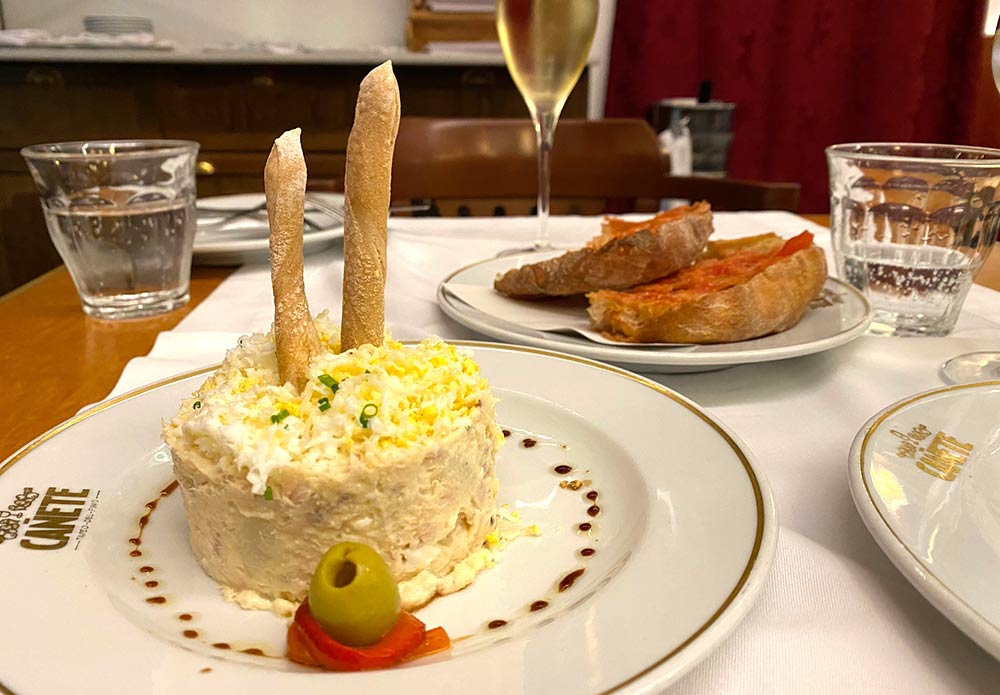 Pre-dinner drink - The rooftop bar at The Barcelona Edition

Right next door to the Santa Caterina food market you’ll find the Barcelona Edition. There is a ground floor bar, but up on the roof is where you really want to be. The crowd is lively, the music is good and we thought the tiki-inspired cocktails were definitely worth a journey up here - ask for a Monkey Tippler made with lemongrass-infused Belvedere Vodka, spiced pineapple cordial & lime. 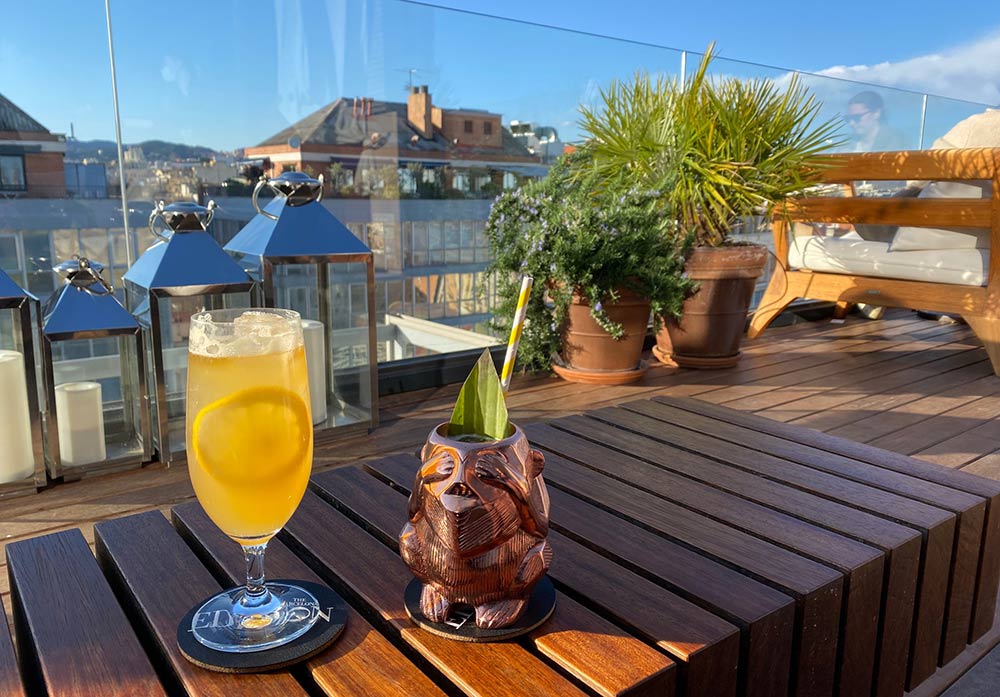 Confusingly this used to be a place of two halves (and two entrances), Can Cisa and Bar Brutal but now this natural wine bar seems to have fallen fully under the Bar Brutal banner. There are three dining areas to choose from here - Sala 1 with the open kitchen, Sala 2 which also houses the bar and Sala 3 which is where in pre-Covid times there used to be a long communal table next to the wall of wine but is now a selection of tables.

The menu is loosely divided into snacks (between four and 12 euros) and larger plates. For us, the real hits were in the snacks and desserts sections. Queen scallops with tarragon were fabulous as was a chocolate sponge cake with caramel foam and cocoa meringue. But what you’re really here for are the wines and there’s a lot to choose from, so ask for help. We ended up with a wonderful fresh Galician white from Fedellos de Couto. 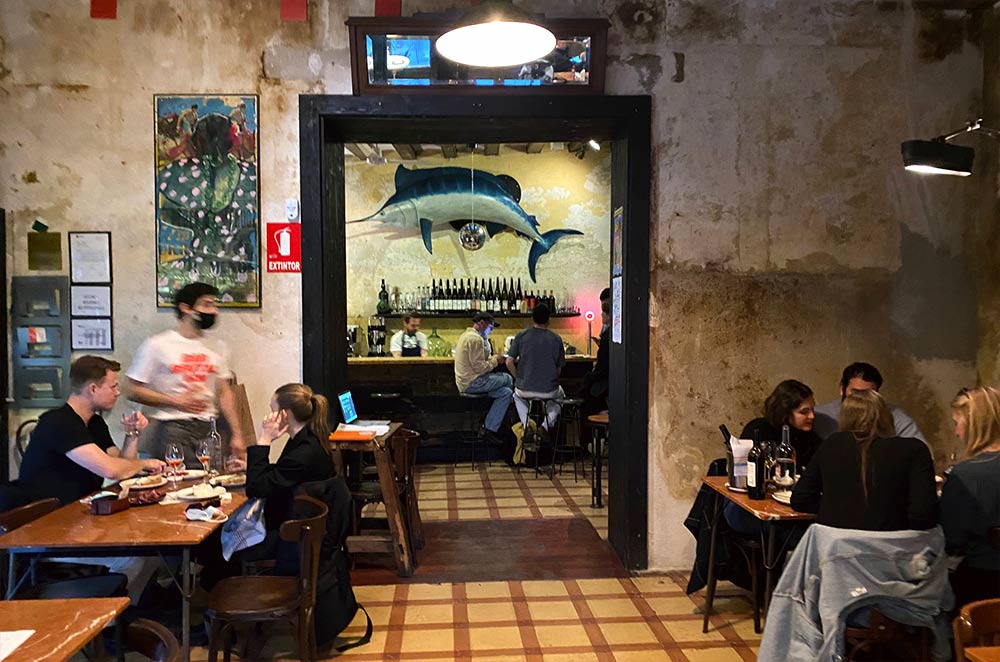 Looking from Sala 3 into the bar 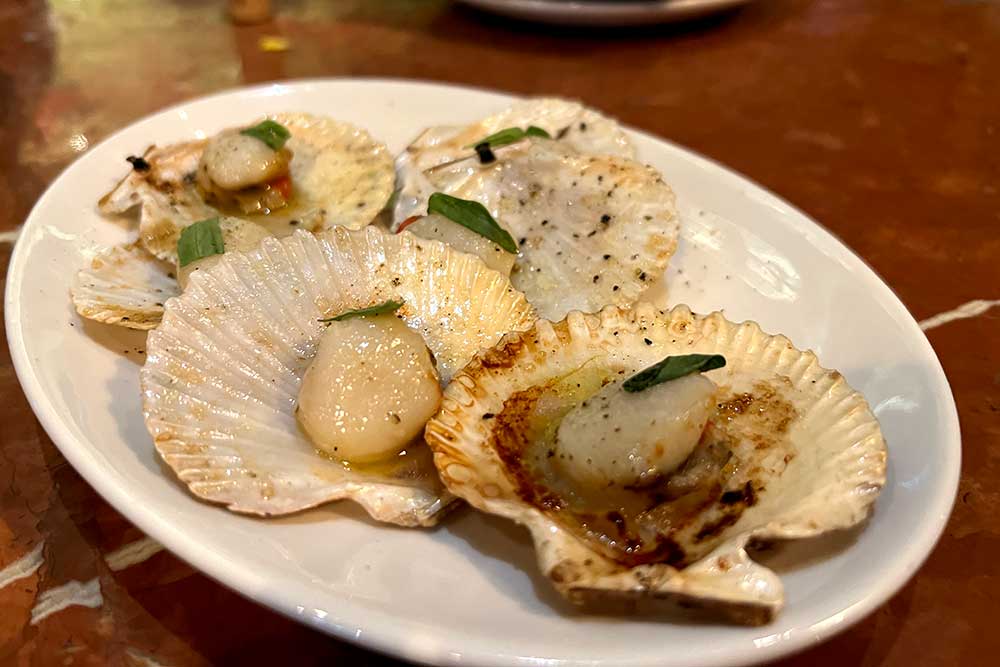 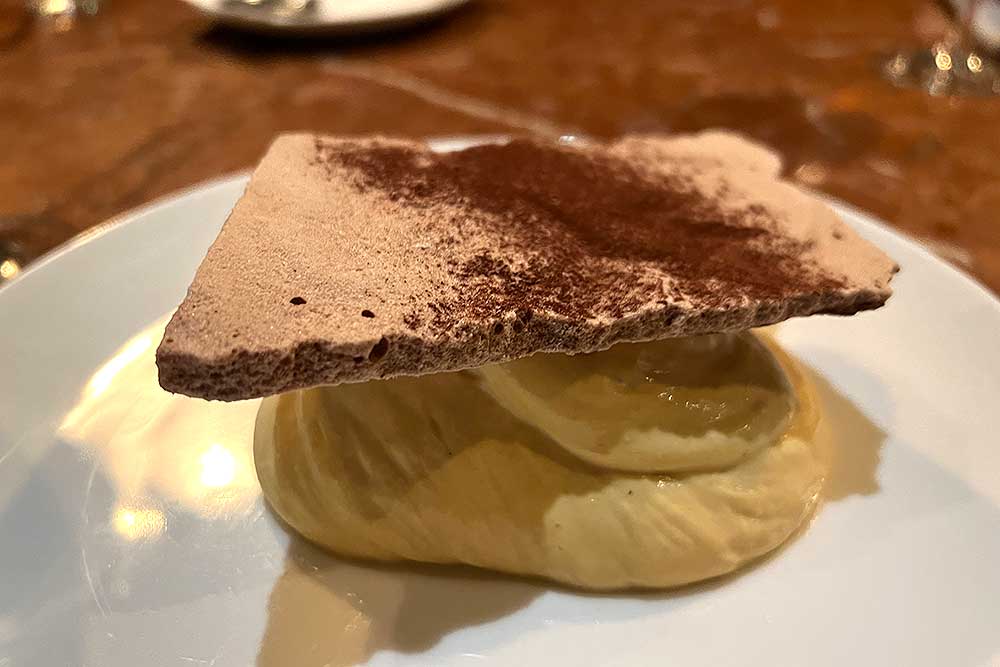 After dinner head down to Barceloneta, the harbour area, where you’ll probably need to queue to get into Barcelona’s best known Cava bar, La Xampanyeria. Yes, it’s a very popular tourist hotspot, but once you’ve found a counter to perch at and have elbowed your way to the front of the counter to order super cheap coupes of cava at under two euros a pop, you’ll be glad you made the effort. 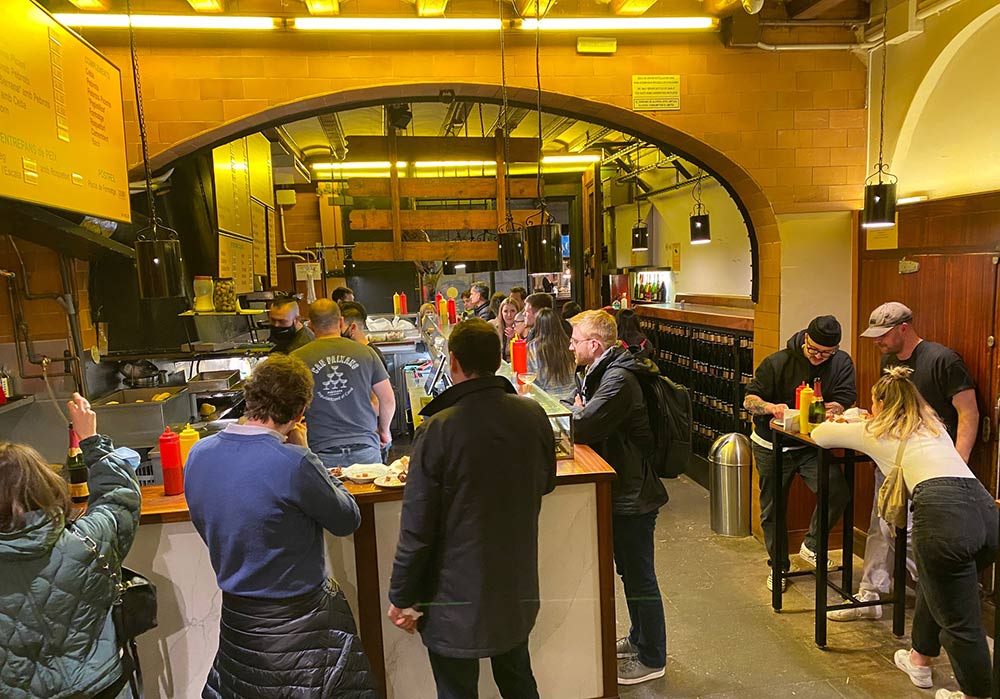 Finding a place to perch at La Xampanyeria

Known for its gimlets, there’s no real explanation for why we ended up with what looks to be an alcoholic slushie at Marlowe, a well-known bar in the Born. However photographic evidence shows that this was indeed the case, although we’ve now no idea what exactly it was. What we do remember is very much liking the laid-back vibe of this cocktail bar. 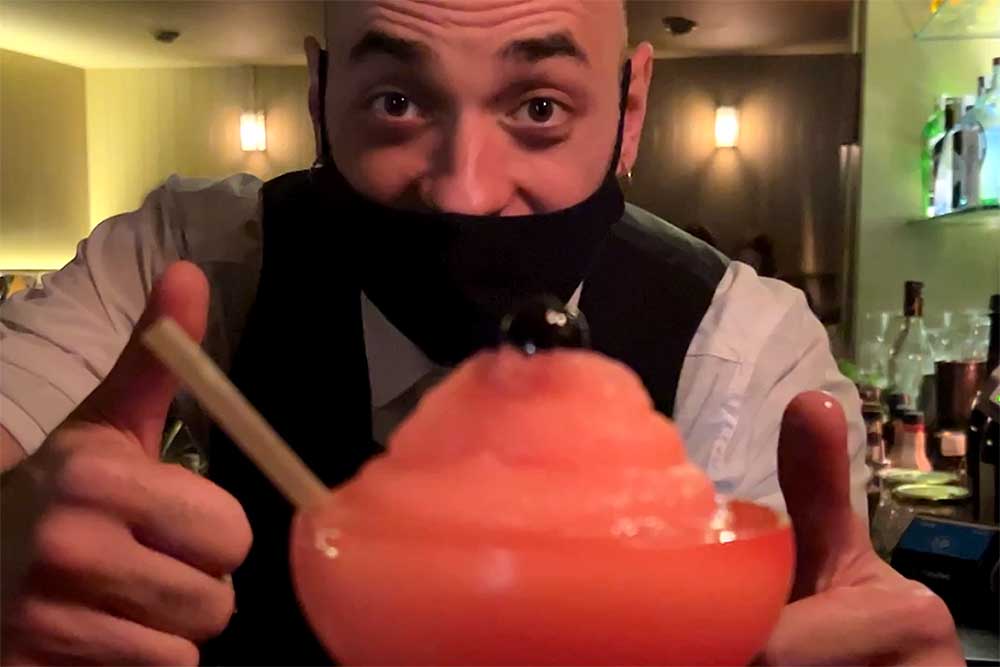 Having walked past this trendy kiosk most mornings, on our last day we stopped at News & Coffee for a particularly good Flat White. Similar to Monocle in London, this hyper-curated stand sells a selection of trendy periodicals alongside excellent coffee. Pair this with a stop at the nearby churros stand for fresh churros and you have the breakfast of kings. 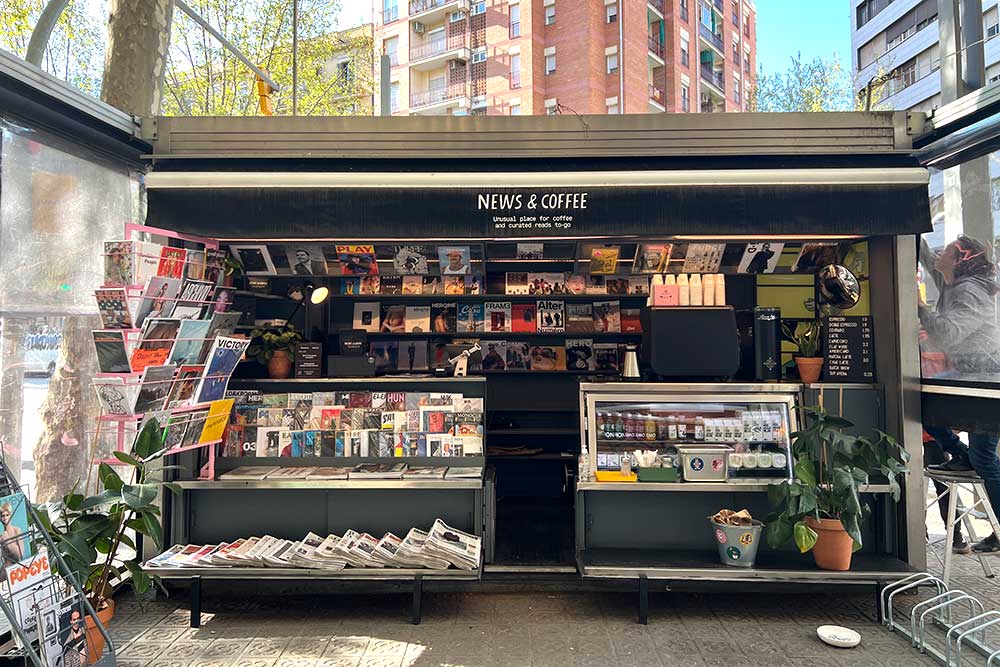 Browse the periodicals while waiting for your - excellent - Flat White.

Your last day is the day to hit the many markets and food shops of Barcelona to stock up on things to take home with you. We’d suggest starting at some of the smaller markets before ending up for an earlyish lunch at La Boqueria before things get too hectic. We rather liked Sant Antoni market which is actually Catalonia’s biggest food market and is mostly full of locals rather than tourists making it a less stressful place to shop. 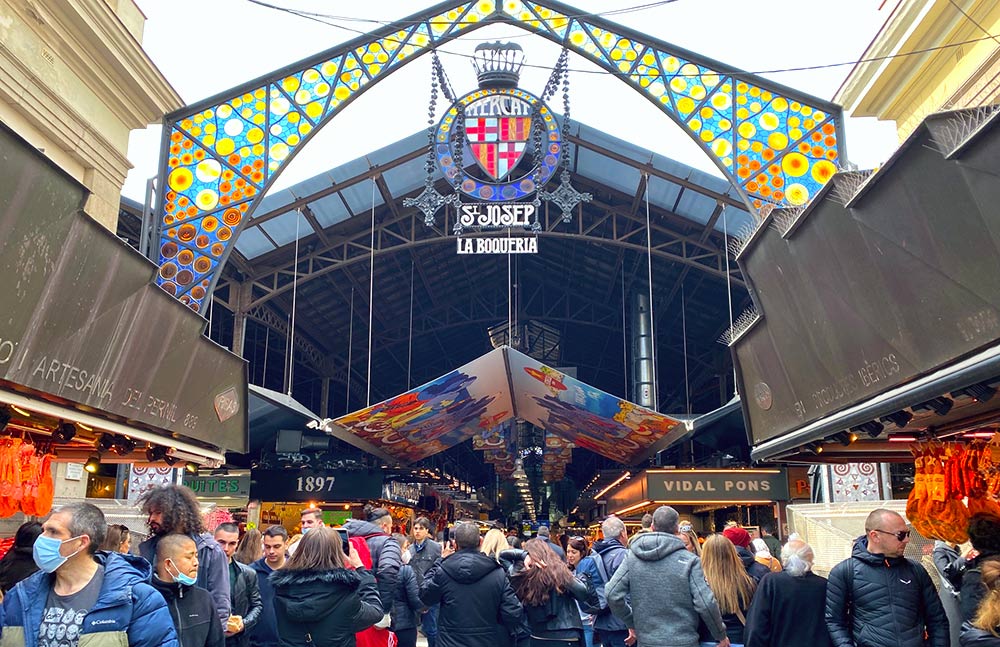 Obviously, you're going to end up here at some point - La Boqueria.

This tapas bar in the heart of Barcelona’s most famous market is usually knee-deep in punters for a reason - it’s as good as its reputation. If you’re coming here in the busy summer months you’ll probably need to arrive here as early as you can to be in with a chance of a stool up at the counter. Once you’ve secured a sought-after seat order a plate of fried eggs and seafood (we opted for the freshest, most garlicky prawns) and a glass of Cava and relax in the knowledge that you’re winning at life. 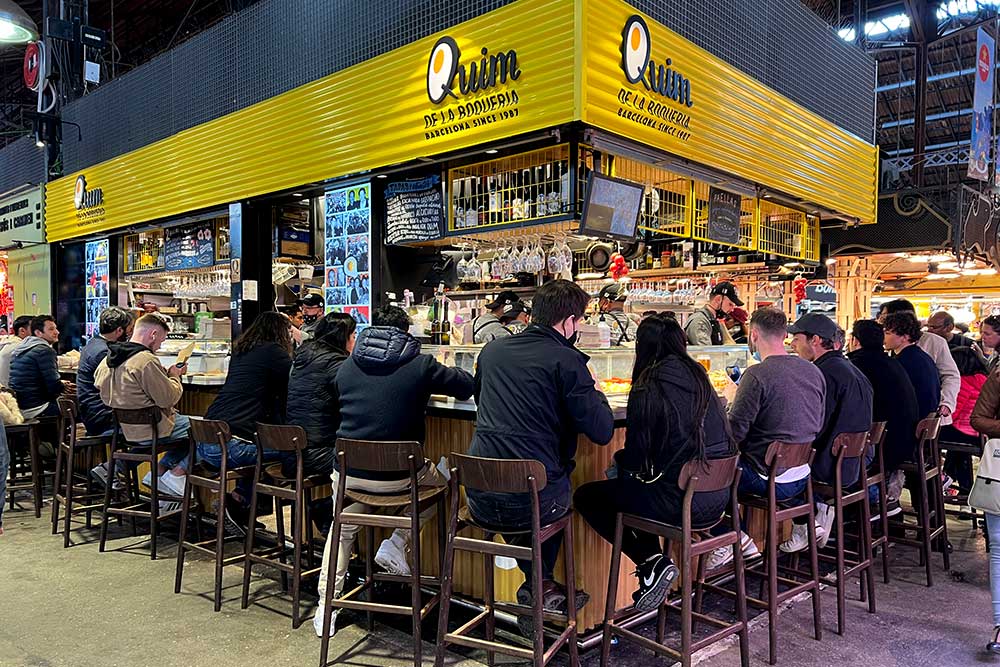 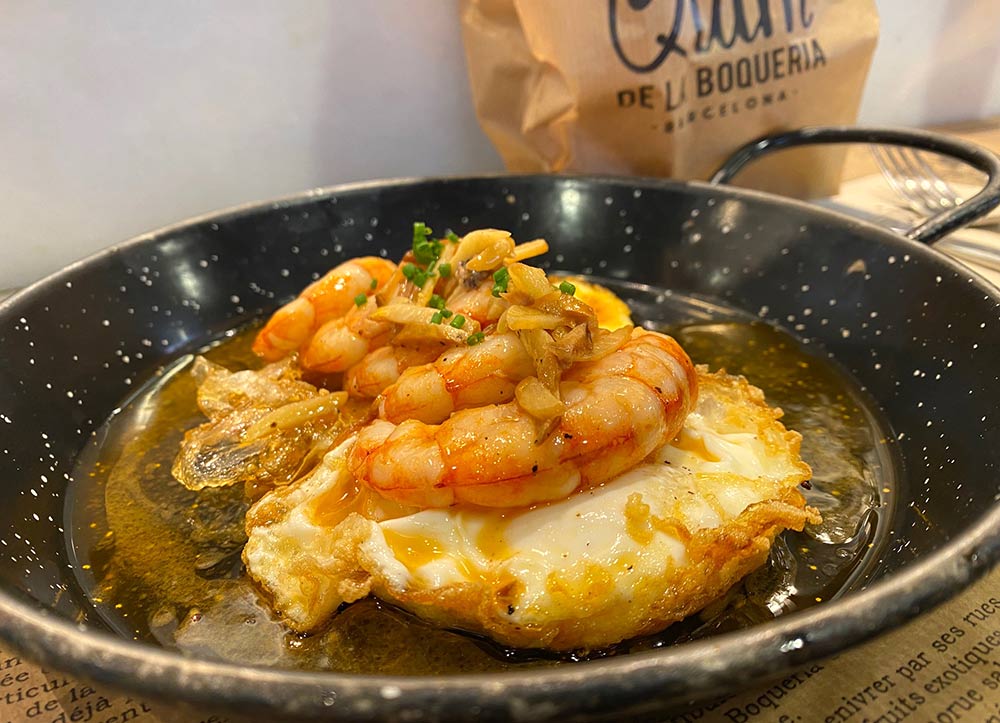 They're not particularly well signposted but there are two huge terraces for eating and drinking once you're through to Departures at the airport in Barcelona. The best one is The Mediterranean Terrace. 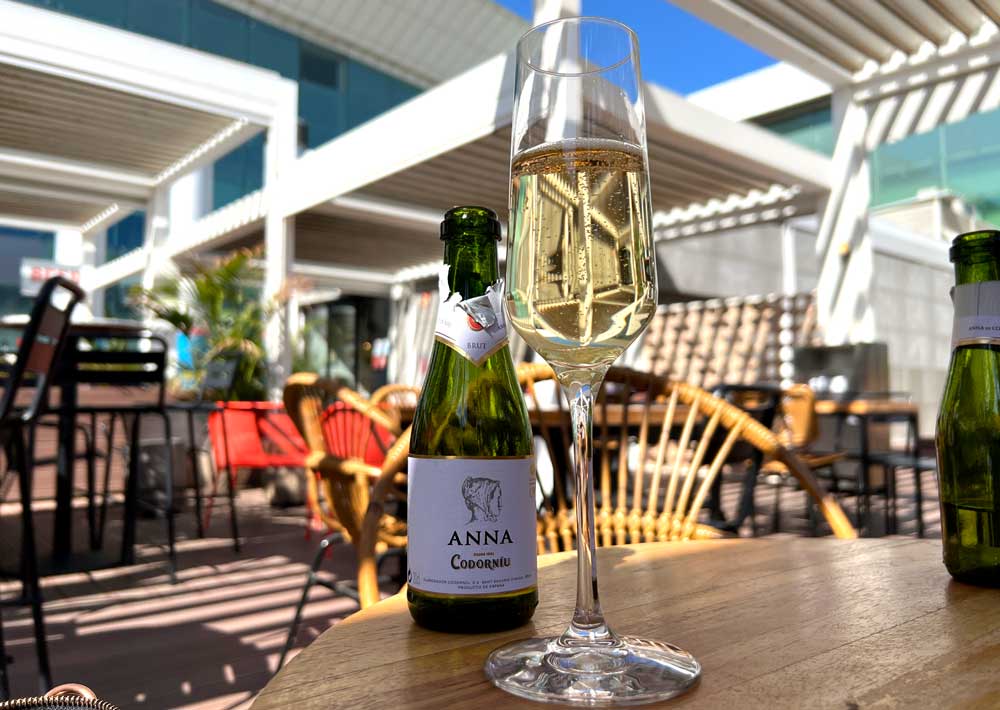 Grab yourself one final glass of Cava in the sun before you head back to Blighty.

If you find yourself, as we did, up near the Plaça Catalunya foot-weary and peckish, you could do worse than heading to the rooftop cafeteria at the huge department store El Corte Ingles. It's recently been renovated and has gobsmacking views of the city, along with a terrace overlooking the square. It's very easy to order a beer and tortilla here and catch your breath. 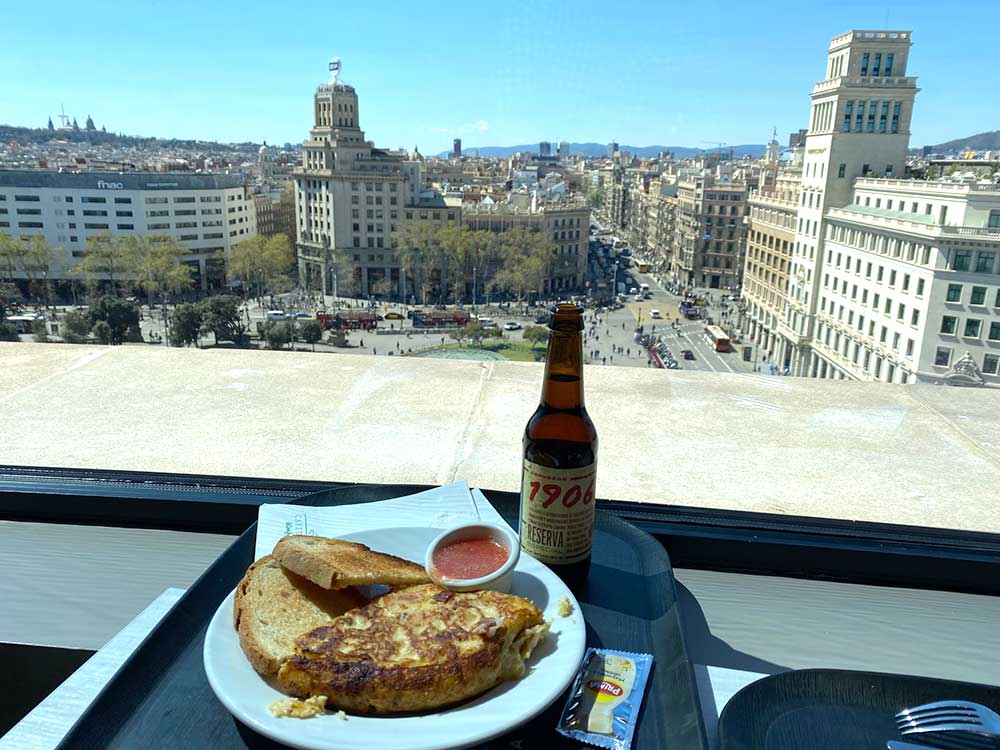 A department store restaurant with quite the view at El Corte Ingles.

We had a LOT of Barcelona recommendations from folk whose opinions we respect but a few days just didn’t give us the opportunity to do the list justice. But if you’re planning a longer trip there, we’re sharing a selection of them here with you for you to take advantage of.

Quimet (recommended by Drapers Arms) "You can make a swing by for a snack".

Tapeo (recommended by Jim from Barrio Familia) - "Tapeo is excellent. Sit at the counter."

La Cova Fumada (recommended by Roopa Gulati) "I love it for the lively chatter & affordable & brilliant cooking, esp the bombes."

Hot Dinners were guests of Mont Bar and The Edition Bar. Any prices are correct at the time of writing.