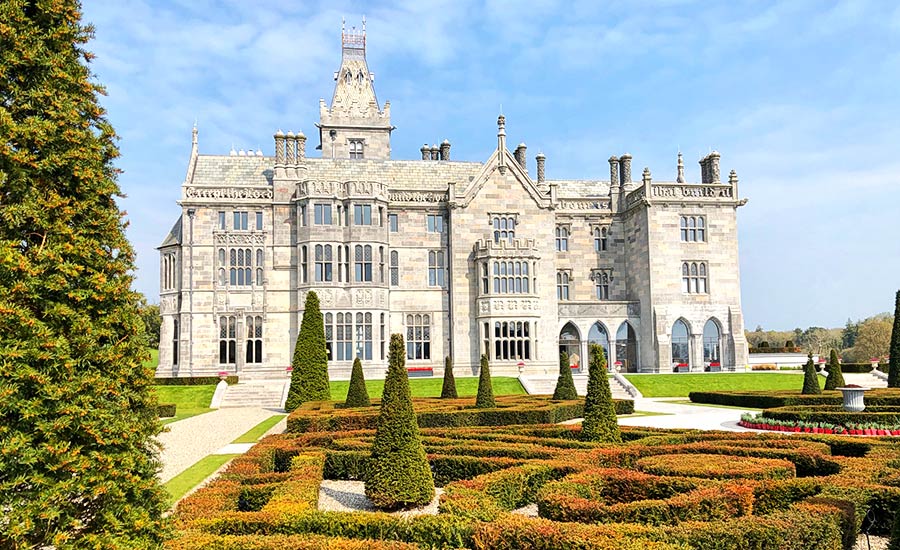 So where exactly is Adare Manor?

As many readers know, we head back to Ireland from time to time, and for us that usually means flying into Shannon Airport in the west of the country. We're always looking for somewhere to eat when we land and handily, Adare Manor is barely a 30-minute drive from the airport, making it 90 minutes all told from Stanstead.

And why's it worth checking out?

Well it has had quite the refurb. Now owned by billionaire Irish businessman JP McManus, the hotel reopened in late 2017 after an 18-month overhaul costing many, many millions of euros. And with a quick look around the hotel, it's easy to see where the money went. It's very much the five-star experience throughout - with great attention to detail everywhere. It has what looks like a damned good basement bar as well as a fine-dining restaurant with a seasonal menu from Head Chef Michael Tweedie. 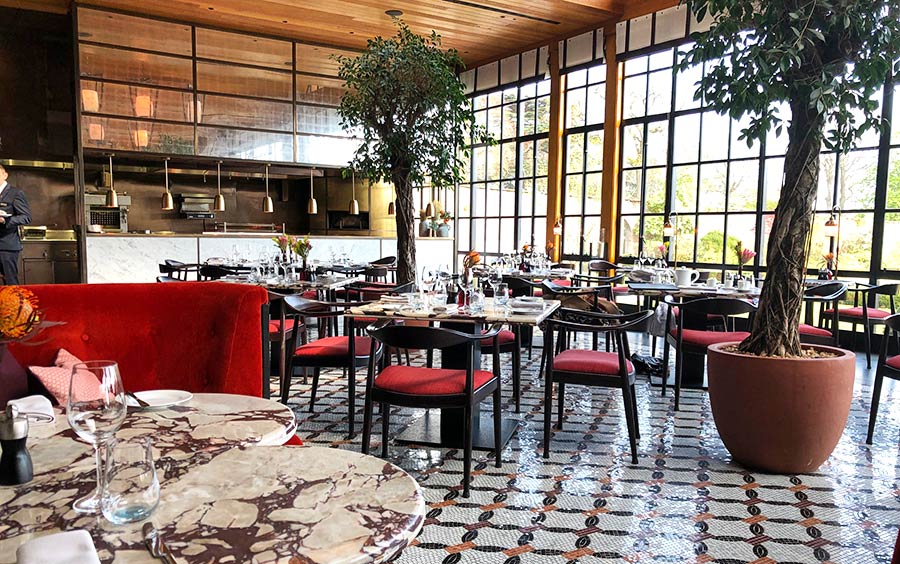 Inside the Carriage House restaurant

But there's more than the main manor building?

Yes indeed. If the cost of staying at Adare is a little too straining on the wallet - or if you're after something on the more casual side, you'll want to head to the hotel's golf clubhouse, which features the Carriage House restaurant, which opened mid 2018.

Part (huge) bar, part brasserie we think it's definitely one of the more interesting restaurants in the area. It's quite distinct from the golf side of things (which they're touting as a possible future Ryder Cup location), and attracts both people staying in the hotel as well as locals. There's the airy room (pictured above) as well as a smarter section that's primarily booths - best suited for dinner.

What type of food can we expect?

It's a casual brasserie menu, but with some extra touches throughout. There's a particular focus on local and seasonal ingredients, as well as the odd touch of Asian cooking influence. It's split into appetizers/salads, mains, burgers, pizzas and steaks. Here's what we had on the day 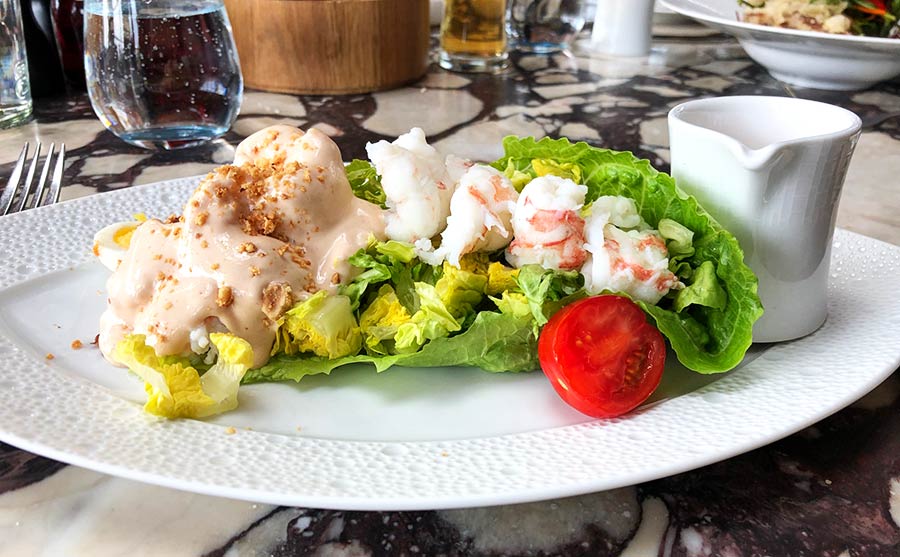 For some of the dishes, there's a focus on some extra on-the-side elements. This Dublin Bay prawn cocktail (€21) is a very good example. The priciest starter, but there are a LOT of prawns in there - and it comes with extra Marie Rose sauce on the side. No more running out of sauce at the bottom on this prawn cocktail. 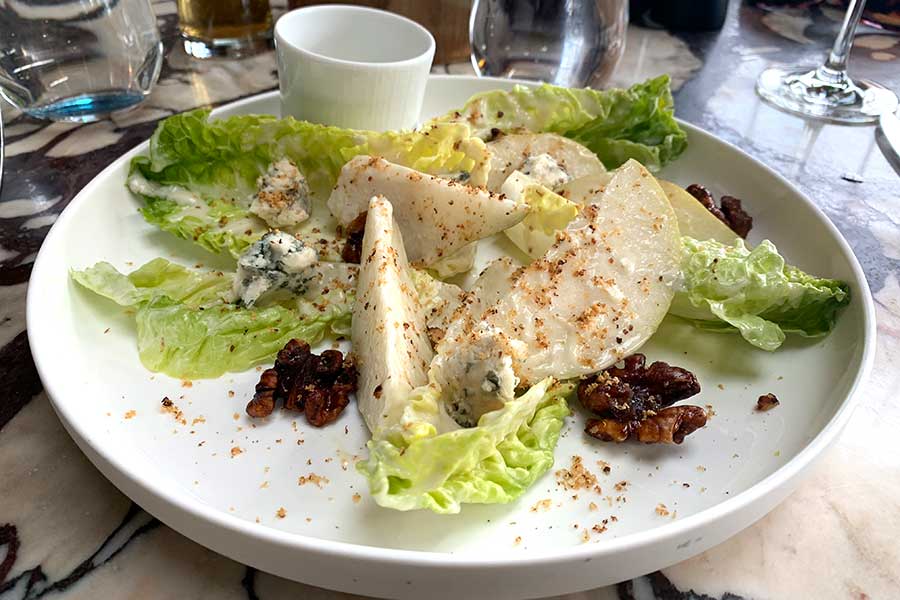 The nashi pear salad  with Roquefort, romaine lettuce and sweet walnuts (€14) - only let down by the rock hard pears, which should have been perfectly ripe instead. 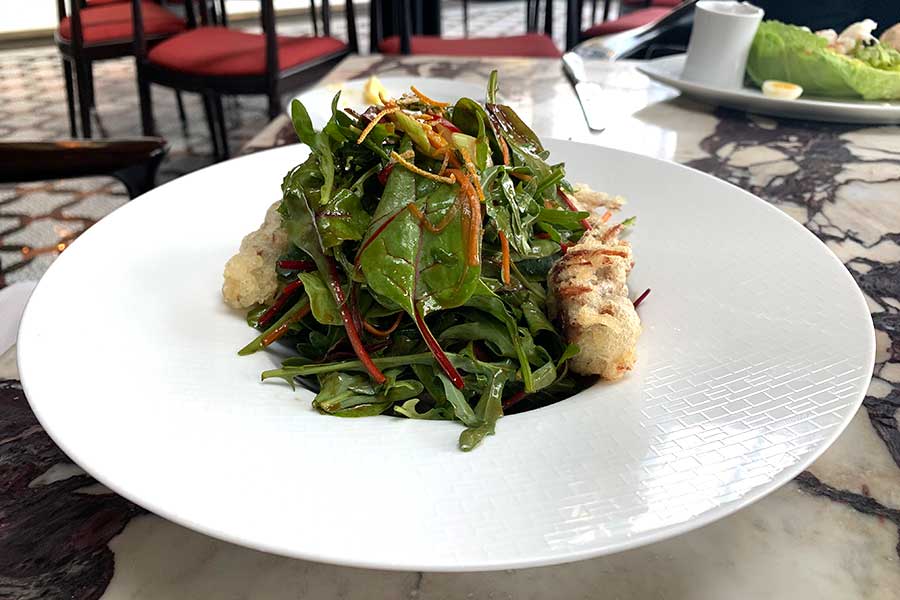 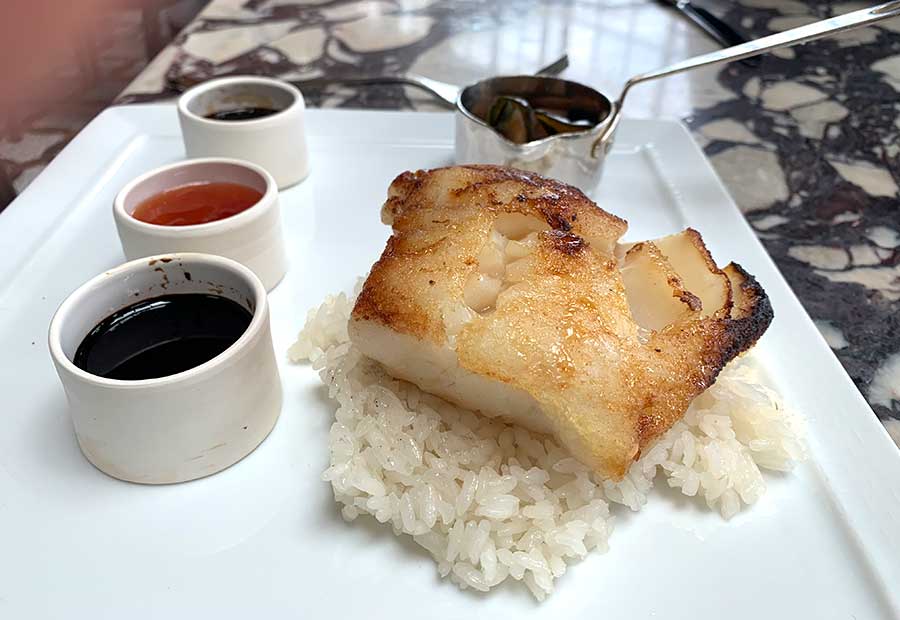 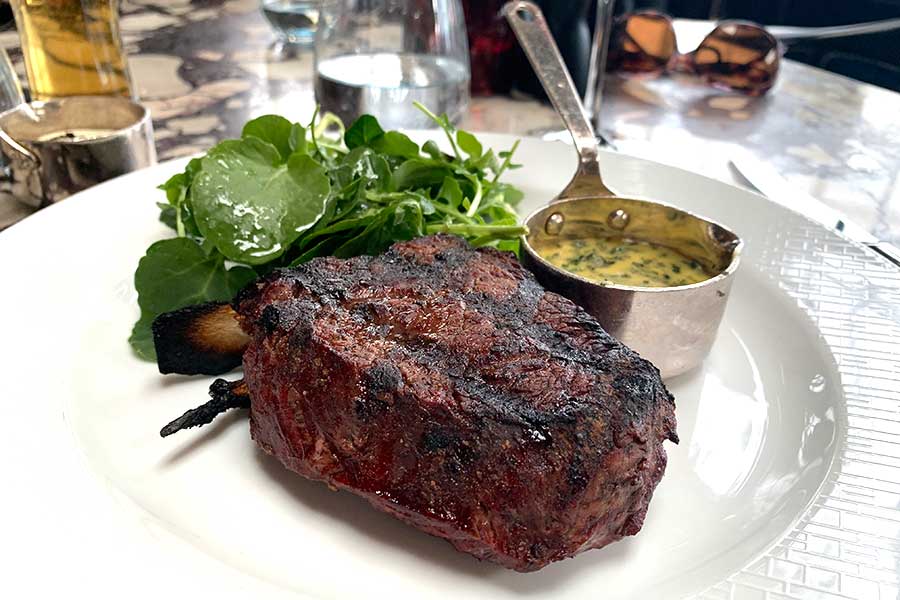 The fillet on the bone (from Ashgrove butchers in Limerick) - 10 oz at €39. An excellent bit of meat - but be warned, when ordering steak in Ireland, ask for a little rarer than you would at home, to get it cooked just as you want (that applies almost everywhere in Ireland, we've learned). 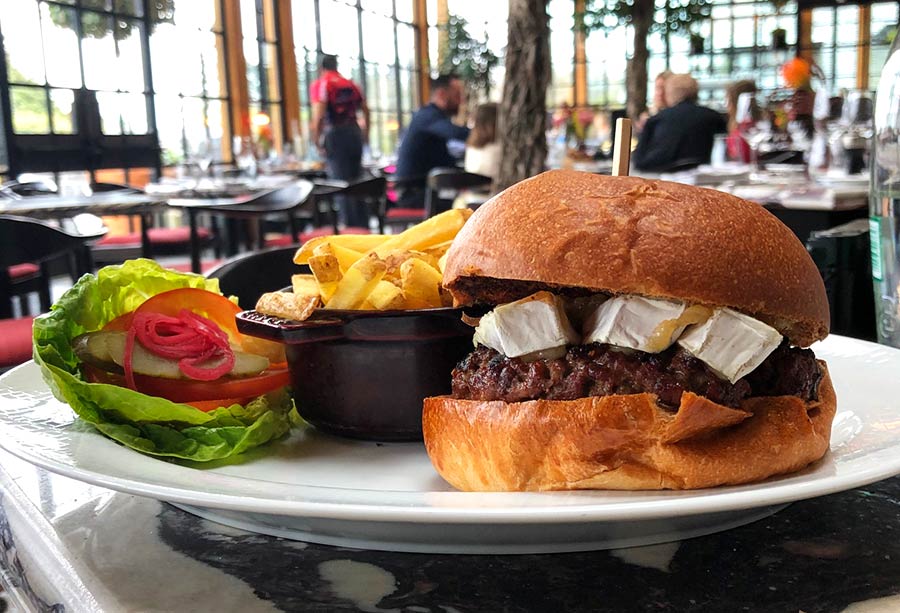 There is a Signature Burger on the menu but also a "Beyond the Burger" section (€21.50) where you can choose from slightly more esoteric toppings. Those include Gubbeen cheddar, Young Buck Blue, wasabi ketchup and more. We went for truffled brie, onions and bacon jam. And we discovered that truffled brie works very well indeed on a burger.

They definitely should think about adding a veggie burger, but otherwise there are a few veggie options - mainly in the appetizer section (where most of the salads can be had as mains). That said, there are a couple of veggie pizzas (one with mozzarella, red onion marmalade, goats cheese, rocket, fig and balsamic glaze - €15.50) and the pea and truffle gnocchi sounded tempting (€16.50).

Ask what the ice cream of the day is - as we had an excellent treacle and brown bread ice cream that we would highly recommend. And, of course, you can count on the local cheese plate being of high quality. Otherwise, we had... 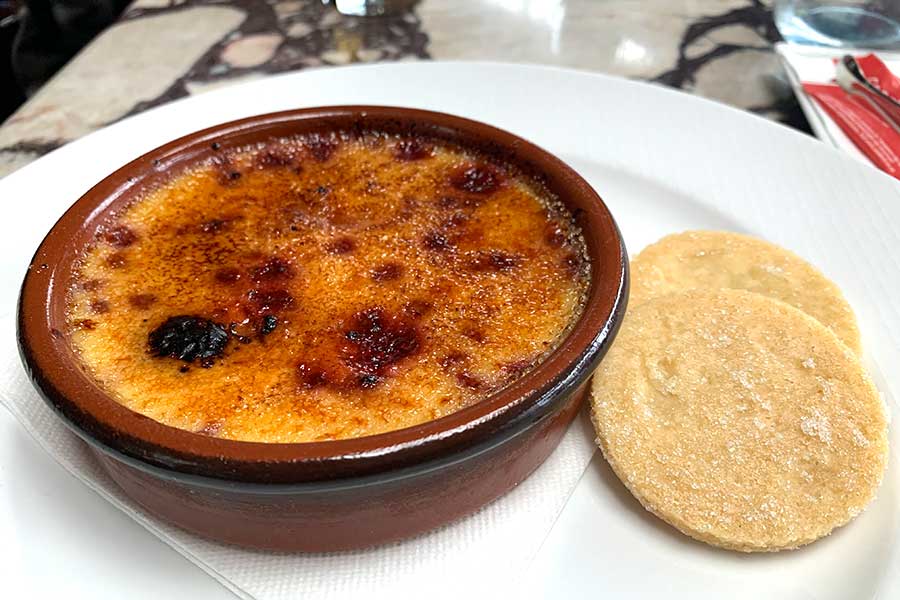 The peach melba creme brulee with raspberries (€7). We were a little curious about this one - but with tiny bits of peach mixed into the creme brulee, this was a truly excellent dessert. 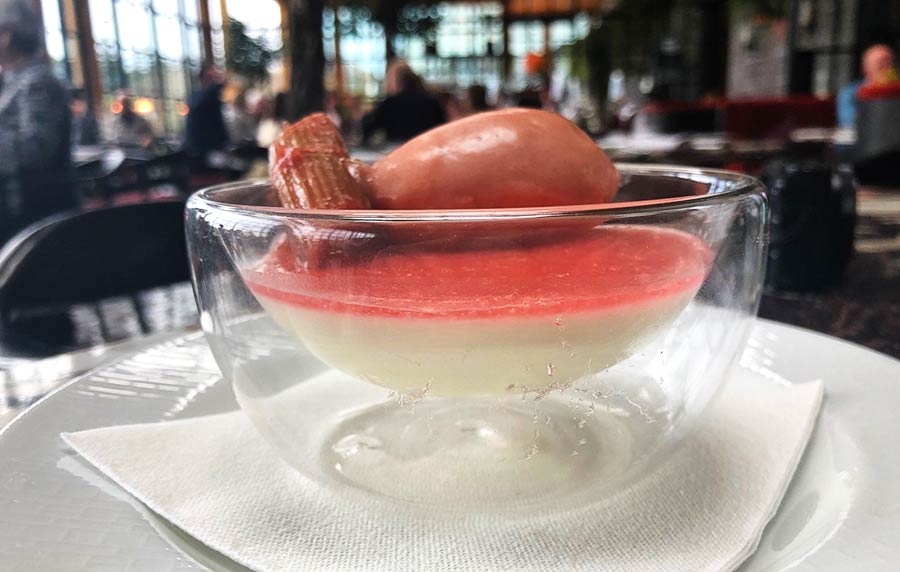 And finishing off with this very seasonal rhubarb pannacotta (€7)

The Carriage House makes Adare Manor a very attractive option for anyone passing through the area. It's well worth a quick detour if you're coming into Shannon, and worth planning a lunch if you're in the area. and you get to have a look around the Adare grounds at the same time too. They have an excellent woodlands walk where we burned off a few calories and that's well worth heading out on once you've finished.

More about The Carriage House at Adare Manor