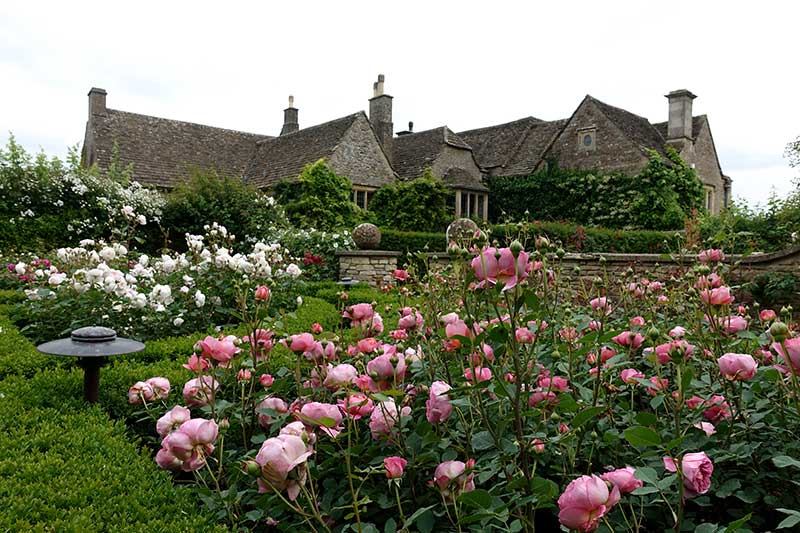 The beautiful gardens at Whatley Manor

This privately owned 19th-century hotel has a massive space to room ratio - with just 23 rooms but two restaurants, a bar, multiple lounges, a spa and 12 acres of beautiful gardens. It's long been a destination for foodies - the former chef Martin Burges won it two Michelin stars.

His successor, Niall Keating (ex-Sat Bains followed by Benu in San Franciso) is already gunning to get those back having won his first star less than a year after arriving here at the beginning of last year. Having won the Michelin Young Chef of the Year this year, those two stars look to be incoming.

A few miles outside Malmesbury, the drive up to Whatley through its extensive private grounds is pretty impressive. Even better still is the bit when you approach the gates to the courtyard and have them swing open automatically to reveal the manor house within.

Grab a map from reception and give yourself time to have a walk through the gardens. We were here at the height of summer and they were quite spectacular. Fans of deep borders and blowsy roses will be in heaven here.

There are six categories of room here ranging from classic all the way up to the grand suite which takes over the second floor of the hotel. Our suite was two down from that but it was still massive with the bathroom, bedroom and separate lounge. 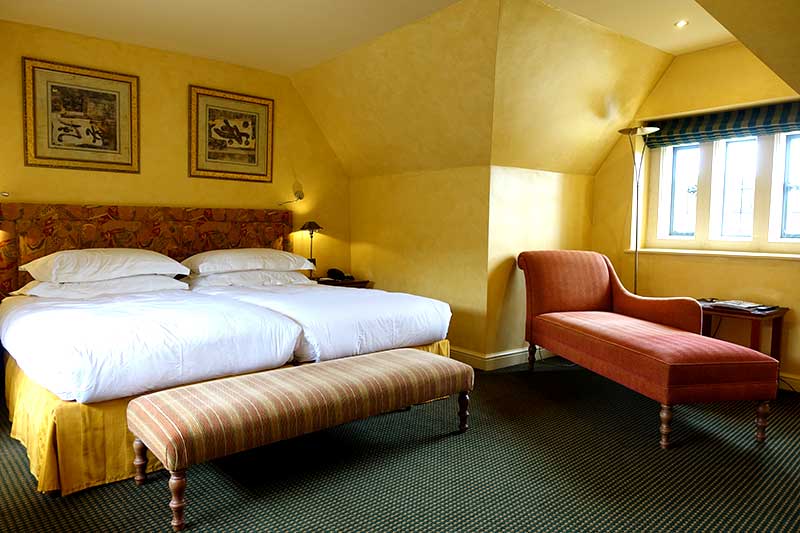 Our suite. Well half of it anyway, there's also an entirely separate lounge area.

Handy tip - even when you check out the next day you still have access to the hotel's spa for the full day.

Talking of the spa, the one here is pretty impressive with a indoor/ outdoor hydrotherapy pool, all manner of steam, sauce and salt scrubdown options.

But when we browsed through the treatments brochure there was really no competition which one we were going to have - the Natura Bissé facials and massages take place in a giant bubble where the air you breathe is 99.99% pure oxygen. Apparently, it's quite the thing in LA. And given the fact Sadiq Khan is always complaining about the air quality in London, we figured this could only be a good thing.

Facials start at £90 (I know!! But the bliss of it) and when my therapist finished and woke me up I glided back to the room feeling and looking at least a few years younger.

One of the nicest things about Whatley are that it looks like the kind of place you could actually imagine living in (if you came into some serious money). There are loads of nice seating areas to perch in and pretend you're just here as part of some posh weekend house party.

Before dinner, we could have picked the lovely looking bar but we actually opted for the drawing room with its view over the lawn and - this was the clincher - baby bunnies bouncing around outside. 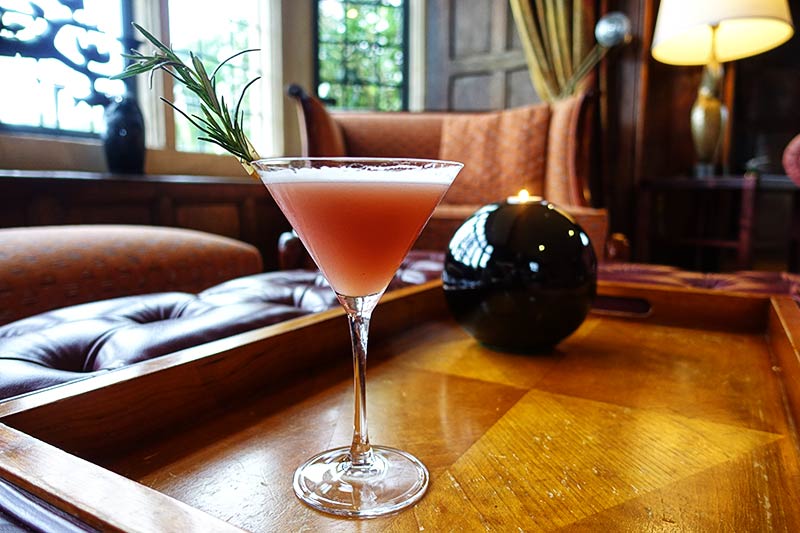 A cocktail before the main event. Bunnies just out of view.

Whatley has two restaurants. The main dining room features Niall Keating's tasting menu for which he's won the hotel a Michelin star. Then there's the more casual Grey's Brasserie serving up sharing boards, steak and chips and other refined brasserie dishes. So it's pretty handy if you fancy staying here for a full weekend but don't want to do the tasting menu twice - you'll have a chance to try the two restaurants.

There's also The Green Room in an outbuilding. That's a chef's table area, all with counter dining and looking like a close cousin of The Kitchen Table in Fitzrovia. Here is where they hold special dinners with wine houses or distillers and the occasional joint event with fellow Michelin chefs.

As we were only here for the night, we were in the main dining room which - and to be fair this was as much a surprise to the hotel as us - was absolutely packed to the gills on a Wednesday night. And it's a pretty big restaurant, so it was lovely to see that the weekday dinner services were going so well. When we visited, it was a 13-course tasting menu (although some of those are snacks - so it's not as intimidating as it might sound).

It's been a while since we've gone for such a big undertaking, but it's well worth it here with some really excellent dishes being paraded out all night. Here's a selection of what was on offer: 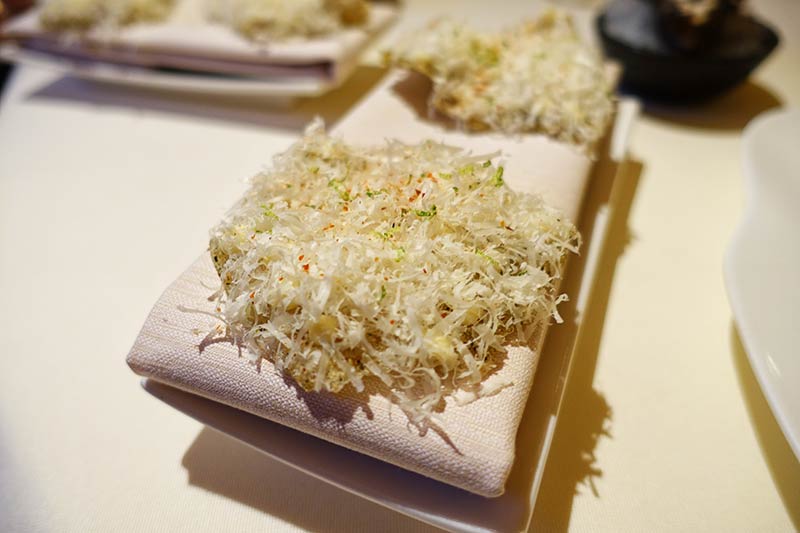 Dinner kicks off with snacks - including these spiced crackers with lime and parmesan. These and some tempura crisps were excellent. 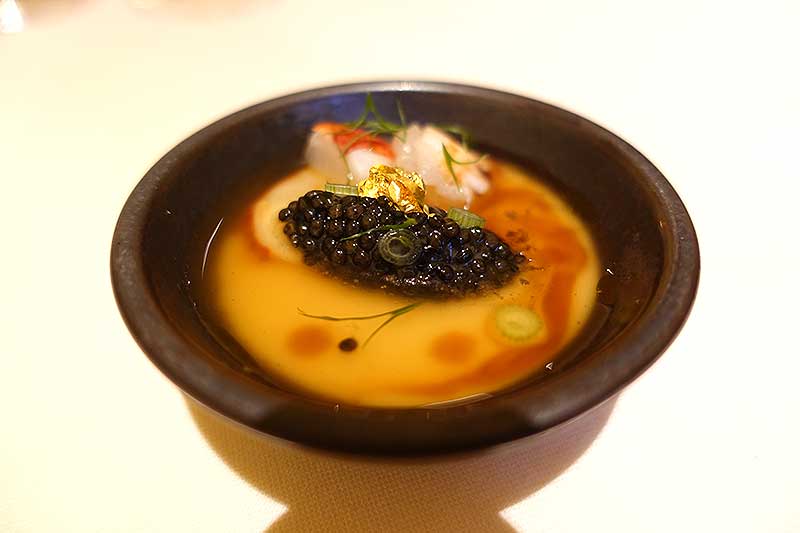 Without a doubt, our dish of the night - the lobster custard with chicken broth. It is everything you want it to be once you see it on the menu. Chicken and lobster really DO go well together. 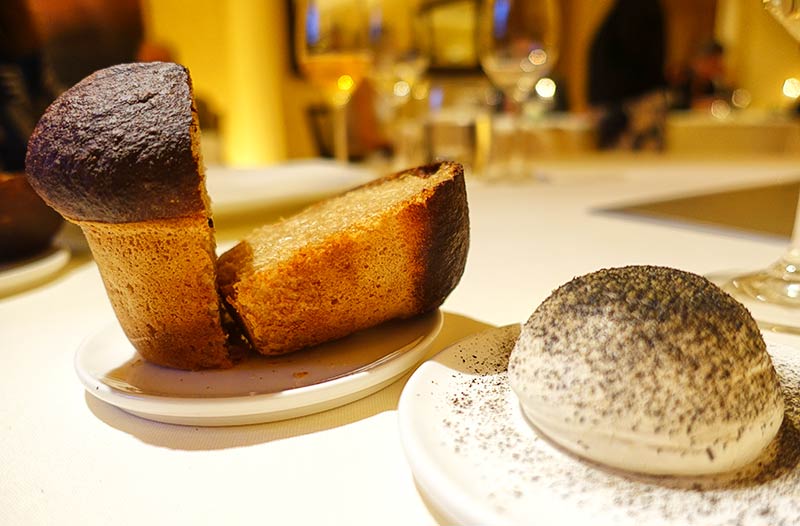 One of the courses of the night is this - billed as "brown butter, buttermilk" and is, according to Niall Keating, "is an 18 hour proved sourdough that we make with our starter that we have had since day one. Butter is whipped with buttermilk and dusted in caramelised yeast" You have to love a tasting menu when one of the courses is entirely devoted to bread. 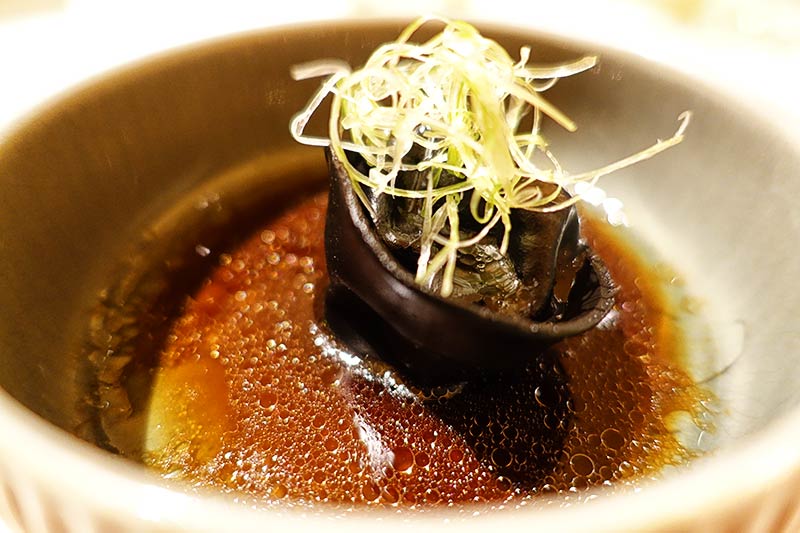 The "black tortellini" is "a squid ink tortellini filled with pork belly and Foi gras and has a liquid pork centre like a soup dumpling. Finished with a black garlic pork jus gras." Yes, it's pretty special. 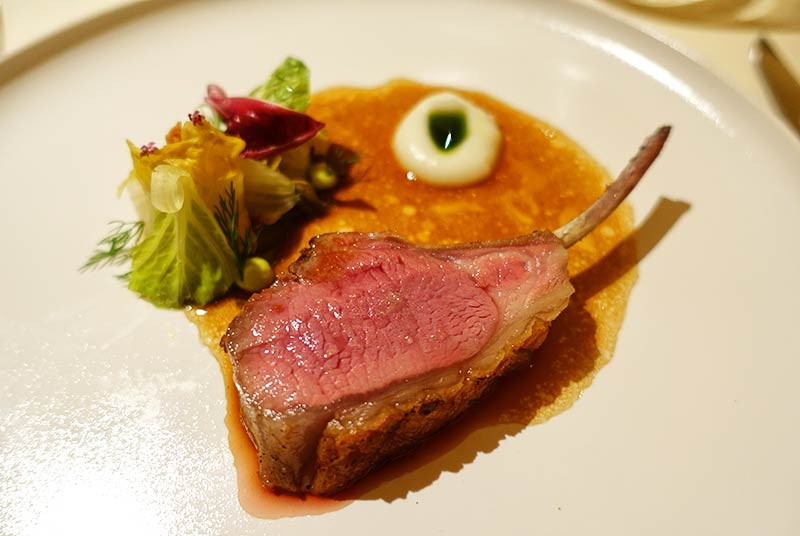 We visited in June - so Spring lamb was still on the menu - this served with dill. 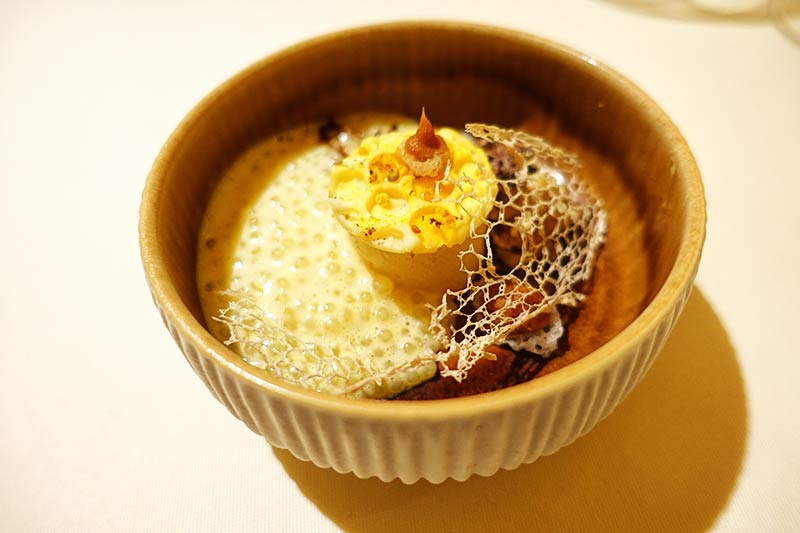 Whately Manor's pastry chef is Sofie Hansen, previously from Kong Hans Kælder in Denmark. And this dessert of "honey, caramel and custard" was wonderfully inventive, looked beautiful with the lattice of caramel and finished off the meal perfectly. It's honey parfait made with local honey, white chocolate, bamboo fungi braised in a caramel stock syrup, apple pate de fruit, 100% dark chocolate and tapioca custard pudding. 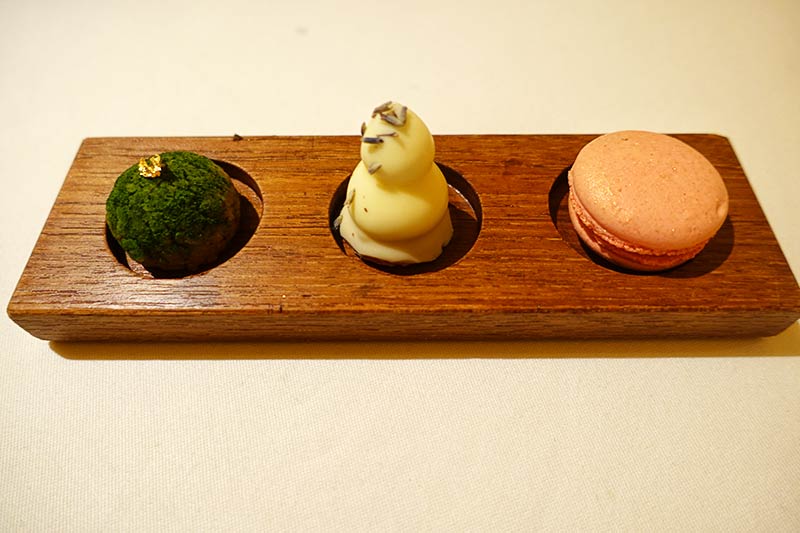 There's one little bit of theatre before you head off for the night. The petit four trolley is wheeled over so you can make your selections. We may have had a couple more than the picture shows... You can also take these back to the huge lounge with coffee.

After a quick dip in the hydrotherapy pool to clear our heads, we were back in the main restaurant for breakfast. It was a bit of a shame that it wasn't the brasserie, as it would have been nice to try both spaces. But it was still great hotel breakfast, particularly the smoked salmon and scrambled eggs, with a pitch-perfect scrambled eggs (and the eggs benedict was pretty damned good too). 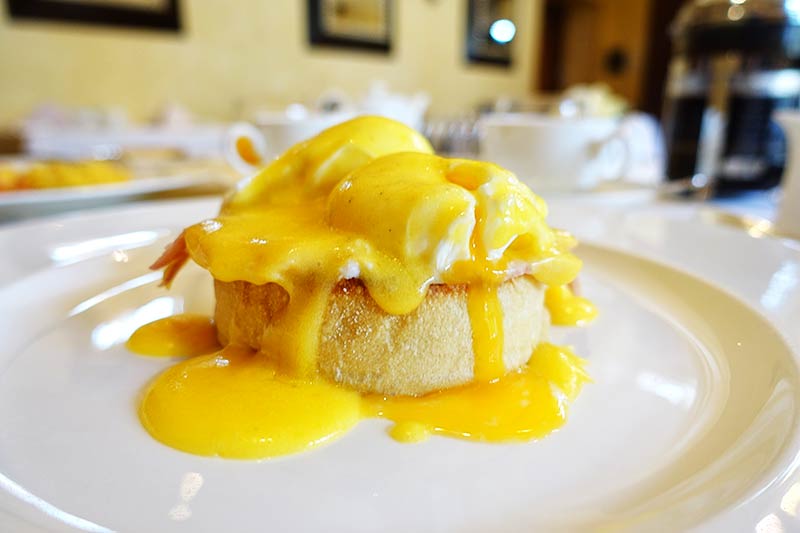 Kicking off the day with Eggs Benedict, the best way to start.

Niall Keating's food at Whatley Manor is 100% travel across the country worthy. Hell, if you're not in the UK we'd say it was worth your giving it a go too. And that's before you consider the lovely surroundings. An amazing food experience in the most bucolic of settings.

Where is it? Easton Grey, Malmesbury SN16 0RB

How to get there: It's just over a couple of hours drive from London, or if you're taking the train it's 1hrs 15mins from Paddington to either Chippenham or Kemble, and a 25 minute taxi to the hotel.

Booking info: Rooms at Whatley Manor start at £260 (including breakfast and use of their Aquarius Spa). The tasting menu at The Dining Room is £125.