[SIGPLUS_EXCEPTION_SOURCE] Image source is expected to be a full URL or a path relative to the image base folder specified in the back-end but /features/2015/wales/gallery is neither a URL nor a relative path to an existing file or folder.
0
Shares

What makes this place such a great foodie destination? 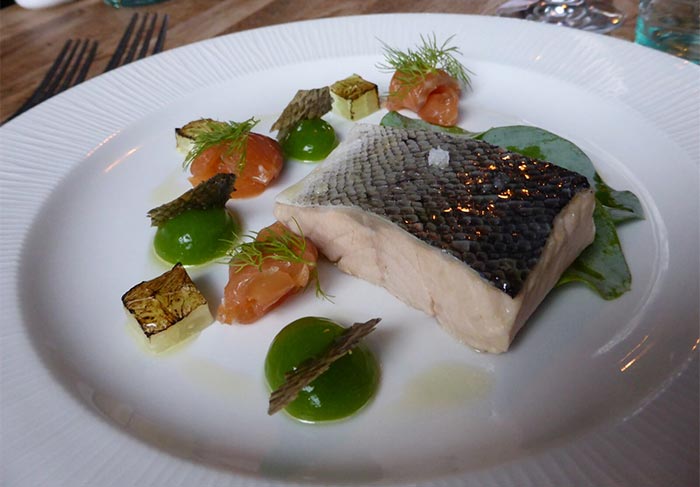 We’re being a bit presumptuous by covering an entire country in one weekend here, but from the Brecon Beacons in the south to the Isle of Angelsey in the north, changes are afoot in the world of Welsh food.

With crops grown in mineral-rich soil, and livestock reared in meadows of clover and wild herbs, the natural food resources in Wales have long been worth shouting about. But now they’re being trumpeted in the bureaucratic labyrinths of the European Commission as they lobby for protected status alongside the likes of Parmesan cheese in Italy and Champagne in France. Some are familiar national treasures, like laverbread and Traditional Welsh Caerphilly, but other rising star ingredients may surprise you – Welsh whisky and coracle-caught sewin anyone? A road trip through the hills and valleys of rural Wales will give you a taster of what the country has got going on gastronomically, as well as all it can offer scenically.

How far from London is it?

We made a beeline for the spectacular Pembrokeshire Coast, about four and a half hours’ drive from central London, stopping en route at Penderyn Distillery (of which more later) in the equally gorgeous Brecon Beacons. 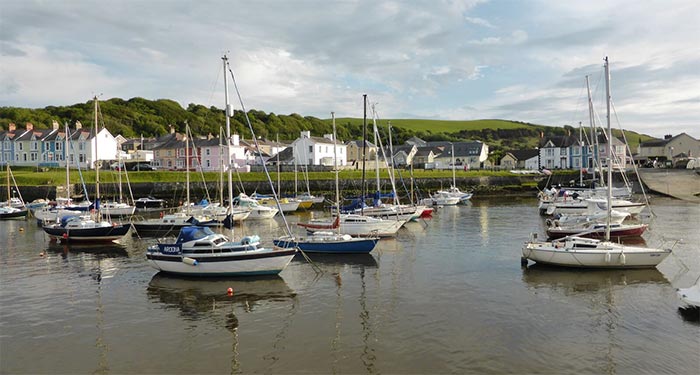 The Harbourmaster Hotel is a buzzing boutique hotel overlooking the pretty little Georgian harbour at Aberaeron, on Cardigan Bay in West Wales. Housed in a listed building, it has a popular bar (with a separate bar menu) and a locally renowned restaurant. Both have harbour views, as did our delightful wood-panelled bedroom, which was accessed via an elegant spiral staircase and decorated in muted maritime shades, with wooden shutters and paintings of stormy seascapes on the walls. Some rooms at the Harbourmaster have their own terrace and there’s also a self-catering cottage. Doubles from £110 a night.

The Druidstone near Broad Haven in Pembrokeshire is a quirky hotel and restaurant with a barefoot boho vibe and a laidback ambience (a guest was playing the piano to his dog when we arrived). It feels more like a chilled-out family home than a hotel but its location is unbeatable – a handsome Georgian house perched on a cliff, with dizzying views down to a sandy beach below. Doubles from £80 a night.

If we’d had time to stop over on Anglesey, it would have been in the absurdly romantic Château Rhianfa, a Loire-style castle towering over the Menai Strait. Check in here for gilt ceilings, four-posters, free-standing baths, a grand piano, banqueting hall, ornate panelling and opulent textiles. A two-night Anglesey Adventure costs from £225 per person, including breakfast, a four-course Château Dining Experience, a seven-course Welsh Gourmet Dining Experience in the Banqueting Hall and a trip to Snowdonia. 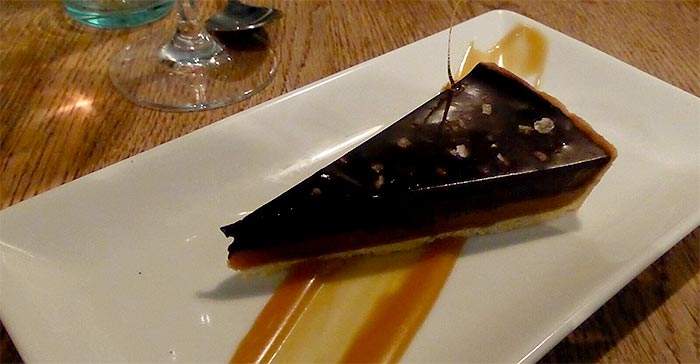 The highlight of our trip was dinner in The Harbourmaster’s restaurant, a panelled dining room with big Georgian windows that look on to sailing boats in the harbour. The head chef, Ludo Dieumegard, was a semi-finalist on Masterchef: The Professionals in 2009, and we were treated to a special menu of Welsh food and drink, starting with a glass of Trogg Traditional Perry from Monmouthshire. Even if you weren't a perry fan you'd be excited by the tumbling plateful of super-crispy fried Burry Port cockles that we ate with it, served on slate (a cliché in London perhaps, but somehow fitting here in Wales).

This was followed by coracle-caught sewin (sea trout) served both poached and cured, garnished with a cucumber mousse and oyster leaves, which really do taste of oysters – if you like that in a vegetable. It’s a dish you appreciate all the more when you know its back story: the fish are caught by two fishermen sharing one net between two wooden oval boats, each steered by a single-handed scull, working at night to stop the hapless fish seeing the shadow of the coracle or the net that spells their doom… The surprising accompaniment to this was a fruity glass of rosé from the Ystad Llaethliw vineyard just a mile or so down the road.

Next was a very fine steak served with bearnaise and Pembrokeshire Earlies, the sweet and earthy potatoes that have just come into season and which had been picked that very day. We drank a Château du Seuil Graves Rouge with this, a pleasingly dark and spicy French red that squeezed its way on to the menu by virtue of its vineyard being owned by a Welshwoman.

The French theme continued with cheese being served before dessert, and the impressive selection of Caws Cenarth cheeses should give Gallic cheesemakers cause for concern, particularly the creamy Perl Wen, which oozed like a Camembert but tasted like a Caerphilly.

Or maybe the cheese came first so that nothing could upstage the arrival of the evening’s star turn, by unanimous agreement – a lush slab of Anglesey sea salt salted caramel chocolate tart, which skilfully trod the fine line between rich and cloying by delivering a gutsy saline kick with every mouthful.

Dinner at The Harbourmaster Hotel in Aberaeron costs £25 for two courses or £30 for three.

At the Druidstone diners are treated to a knockout view of the beach and a section of the vertiginous Pembrokeshire Coast Path snaking its grassy way round a nearby cliff. If the weather allows, you can eat outside for maximum scenic thrills. We loved the buffet of Welsh-inspired dishes we had here – creamy Traditional Welsh Caerphilly, mackerel from a local bay and a herby salad of ‘Pembs Earlies’, presented on platters cheerfully festooned with garlands of flowering herbs.

Andrew Sheridan, head chef at Château Rhianfa, recently bagged the Top Hotel Restaurant of the Year accolade at the Food Wales Awards. He keeps things local where he can, sourcing lobster and crab from the Menai Strait and meat from Welsh farmers. As well as gourmet overnight packages (details above), you can book a Dining Experience at the hotel for £35 for three courses.

Also on Anglesey is the intimate and enigmatic Sosban & The Old Butchers in Menai Bridge. We’d love to come back and check this place out because it sounds marvellous – the menu changes every day according to what local produce is available and it’s fixed, so you have to place your trust in the hands of the chef, Stephen Stevens, who trained under Marcus Wareing. It’s up for a Waitrose Good Food Guide Readers’ Restaurant of the Year award and customer reviews online are ecstatic. A four-course dinner costs £43.70, and it’s only open Thursday to Saturday so book well ahead.

If you’re en route to Snowdonia, take a pitstop at The Rhug Estate near Corwen in Denbighshire, purveyors of organic meat to the Chiltern Firehouse, the River Café, St James’s Palace and The Ritz, as well as the lucky schoolchildren of Tower Hamlets. Stock up at its famous farm shop (see below) and enjoy a slap-up lunch or breakfast in its Bison Grill Bistro. The organic Rhug Bison Burger with red onion marmalade and triple-cooked chips (£13.50) is the most popular dish on the menu. If you’re pressed for time, grab an Aberdeen Angus Beef Burger (from £3.50) from its On The Hoof Takeaway, a popular spot with bikers and those who like their drive-through burgers to be a bit special. 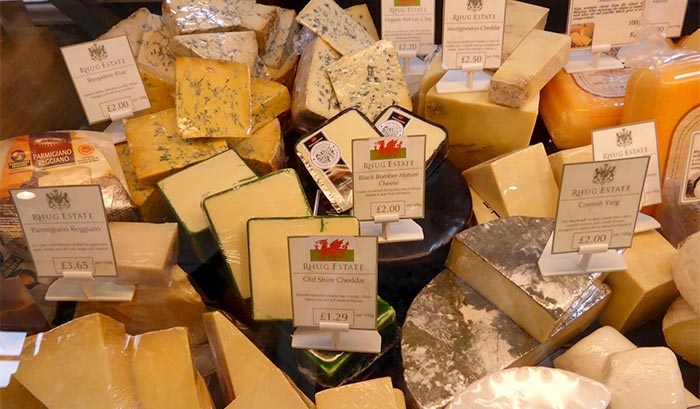 Whisky: So the Welsh make whisky – who knew? Penderyn Distillery is the only distillery in Wales and was the first for 100 years when it opened in 2004. It’s located just inside the scenic Brecon Beacons National Park and tours of its distillery are open to the public. The towering copper stills, gleaming brass tanks and bubbling vats all look very steampunk, but its distilling method is unique and the stills are bespoke-made by a descendant of the Victorian scientist Michael Faraday. Penderyn whiskies are fast making a name for themselves, and you can sample a selection in a masterclass, a tasting, or a ‘nosing’ (that’s one for the designated driver).

Organic meat: Don’t miss the epic butcher’s counter at the Rhug Estate Farm Shop, which is well worth a detour to stock up on organic lamb, beef and chicken, as well as the shop’s pies, tarts, cheeses, Welsh cakes, chutneys and foodie souvenirs. We had a chunk of Rhug Estate salt marsh lamb for lunch, and it was delicious – as you’d expect from a creature raised on fields washed by the sea and nourished by a princely diet of sea lavender, samphire, sorrel and thrift.

Cheese: Watch cheeses being made, taste a few, then stock up on your favourites at Caws Cenarth, an artisan cheesemaker in the green valley of the River Cych, Camarthenshire. As well as the creamy Perl Wen, we recommend the pungent Golden Cenarth.

Sea salt: With previous customers including Heston Blumenthal, Ferran Adrià and (rumour has it) Barack Obama, whose favourite chocolates are encrusted with it, Halen Môn sea salt has quite a pedigree. Based on the lovely Isle of Anglesey, the producers recently opened a visitor centre where you can watch the salt being crystallised (the seawater all comes from the Menai Strait outside) and try a tasting of half a dozen different salts, including smoked salt and vanilla salt. The shop sells pure or flavoured salts, such as Welsh Oak and Umami, as well as bottles of Oak Smoked Water, a by-product of the salt-smoking process – apparently Heston uses it in his risottos.