Taking the Venice Simplon-Orient-Express from London to Paris 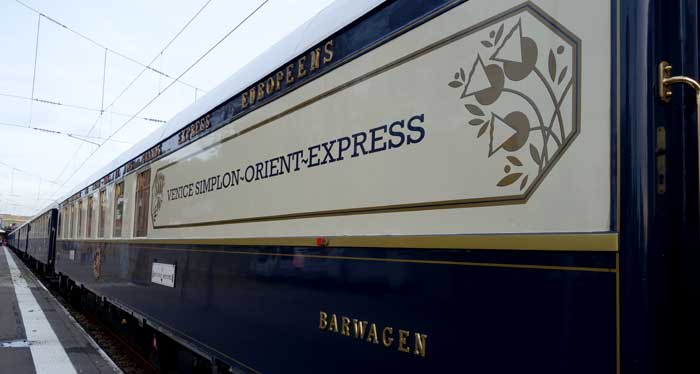 All aboard - the thrill of the journey

Could there be a journey more imbued with glamour and romance than a trip on the Venice Simplon-Orient-Express? Just the name conjurs up an age in which travel was something to be looked forward to, rather than endured: that the act of getting somewhere could be just as much fun (maybe more so) than the time spent at your destination.

If you've wondered though, how such a historic train makes it underneath the Channel - the short answer is that it doesn't. From London Victoria to Folkestone, you take the Belmond British Pullman. Then it's a convoy of luxury coaches on board the Chunnel. It's at Calais where you actually board the iconic train. 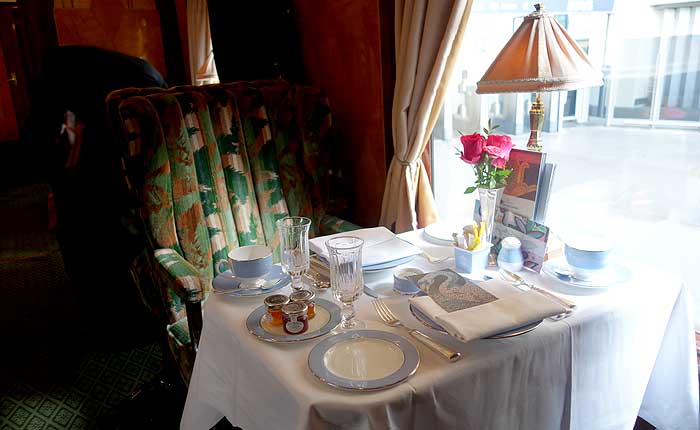 Table for two on board the British Pullman

Our journey from London to Paris began on a Sunday morning at Victoria station where check in is at a special lounge beside Platform 1. The place is humming with activity - there are a lot of folk going on anniversary, key birthdays and other special occasions - and there's a Channel 4 documentary crew filming us to boot.

Although we're only going as far as Paris, this is where our bags are checked in - we won't see these again till we board at Calais. So we head out of London on the Pullman with a leisurely Sunday brunch, kicking off with champagne and finishing with fresh crumpets, London smoked salmon, scrambled eggs and a generous dollop of caviar.

By late lunchtime we were at Folkestone where the train was met by a brass band - everywhere the train goes, there was a lovely fuss made of us. It was a simple switch to the luxury coaches and then were off to Calais. With travel times and an hour's difference it was about 4.30 by the time we boarded the Venice Simplon-Orient-Express. 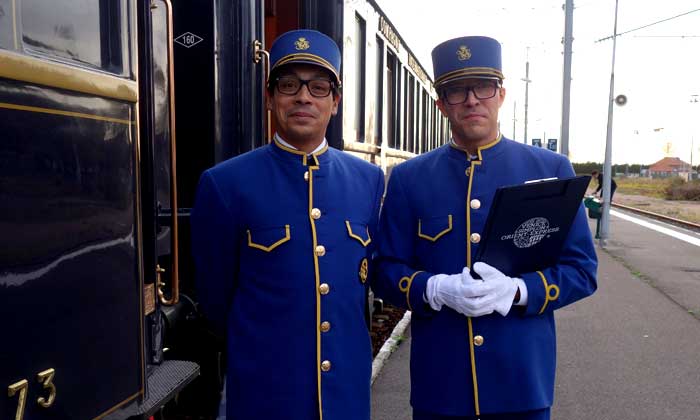 Our stewards meet us on the platform at Calais

This is where you'll want to take a moment and a picture on the platform. We couldn't quite believe we were getting the chance to take one of the world's most iconic rail journeys. Our lovely steward Thibaut then brought us to the day cabin we'd been given. This featured a comfortable sofa-style seat (which switches to bunk beds if you're spending the night), a sink with everything you'd need to freshen up and - crucially - a bottle of champagne on ice.

There are two dinner sittings and we'd been given the earlier one, so it was a bit of a dash to get into our evening dress - dressing up is definitely the thing here, you'll feel distinctly out of place if you don't. But we managed to squeeze in time for a quick cocktail before dinner in the bar car, where a pianist tinkles the ivories on a baby grand. The head barman Walter is a real character and one of his Guilty 12 cocktails (22 euros) - to match the number of the suspects in Agatha Christie's novel - is a must-try. 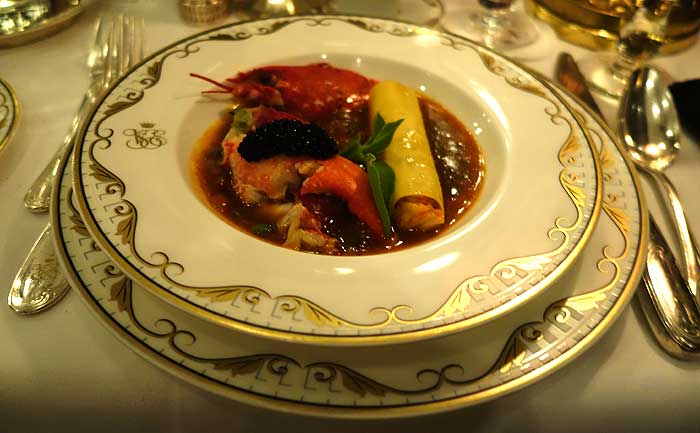 Our starter - blue lobster with cannelloni and black truffle caviar

The set dinner is included in the cost of the journey (although there is an option to go a-la-carte if you prefer and don't mind paying extra). And frankly, we can't believe they manage to turn out this standard of food to so many people - 180 at each sitting, within a relatively short time frame and from a kitchen no bigger than a walk-in wardrobe.

Highlights of the four course meal included a starter of blue lobster with lobster cannelloni in a vegetable broth with black truffle caviar, a massive selection of wonderful cheese, served French-style before the pudding and a pitch-perfect dessert plate of chocolate, vanilla and coffee bavaroise. By the time they brought out the petits-fours we had to concede defeat.

Sadly, there wasn't time after dinner to repair to the bar as we'd have liked. And there's apparently a champagne bar on board which we didn't see (and isn't referred to on their website or in the beautiful ticket/souvenir guide) which serves a selection of vintage champagne.

The lesson to learn from this is - don't leave at Paris. You'll be kicking yourself for not having sprung the extra cash to go the full distance to Venice and, trust us, we hated to leave at the Gare de l'est, seeing everyone's cabin turned down for the night and the festivities in full swing in the bar. 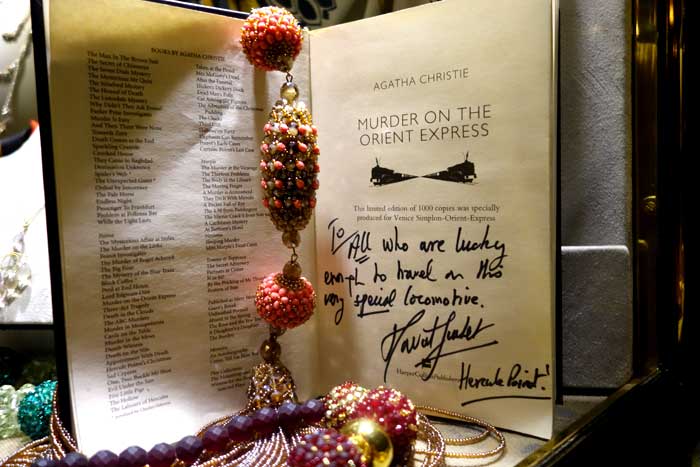 A message on board from Poirot (aka David Suchet)

So, the big question, is it worth it (and how much does it cost)? London to Paris starts at £770 per person and it jumps to £2210 if you go all the way to Venice. We'd say save up and go to Venice. Because, if you can afford it, this trip is DEFINITELY worth it. We loved every moment of it. Every member of staff went out of their way for us, recognising that all the passengers are on board for some sort of special reason or celebration. All around us, folk were being made to feel like royalty and were clearly loving it. If we had the cash - we'd do it again, in a flash, no question.

*Hot Dinners travelled on board the Venice Simplon-Orient-Express as guests of Belmond.