[SIGPLUS_EXCEPTION_SOURCE] Image source is expected to be a full URL or a path relative to the image base folder specified in the back-end but /blog/2013/thefrench/gallery is neither a URL nor a relative path to an existing file or folder.
0
Shares

Rogan in Manchester - we Test Drive The French at the Midland 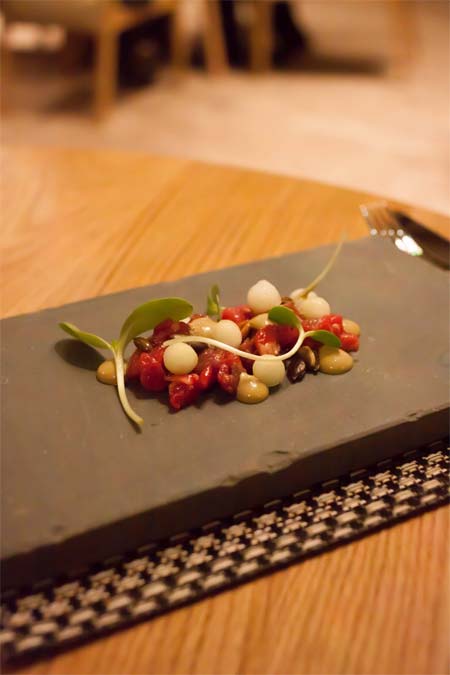 Simon Rogan is a busy chef. In addition to launching The French, he's also scouting a new site for Roganic and plotting a comprehensive refurbishment of L'enclume. But not before he starts work next month on another project with The Midland to overhaul their breakfast offer. Quite an amount of work anyone would agree, especially for someone who has a newly opened restaurant to oversee. Even at such early stage, we found The French to be a highly polished operation and already very much at home in the heart of this historic hotel.

What can you tell us about The Midland Hotel?

A majestic, grande dame of Manchester, The Midland is situated in the centre of the city, opposite Manchester Central. This 300 room hotel was opened at the turn of the century and has survived WWII bombings and overzealous modernisation plans, taking pride of place as a key building exemplifying Manchester's rich architectural heritage.

The interior layout of the hotel hasn't changed much since its creation. Guests are warmly welcomed immediately upon entering the main lobby, an expansive and impressive space. Upon checking in you are then whisked up six floors in gold panelled elevators. The suites are spacious, tastefully furnished and very comfortable. The higher levels benefit from sweeping views of Manchester and the hills beyond.

What about staying over?

Upon checking in guests are whisked up six floors in gold panelled elevators where spacious suites are scattered around this ornate Edwardian building. Our room was tastefully furnished and very comfortable, the high ceilings provide a feeling of spaciousness and are comprehensively kitted out thanks to a recent refurbishment. The higher levels benefit from sweeping views of Manchester and the hills beyond.

And just how far from London is it?

The UK’s third largest city lies 160 miles northwest of London. Trains depart from Euston and take just over two hours, arriving into Manchester Piccadilly, the Midland is a 5 minute cab ride from the station. If you’re keen to drive, it’ll take around three and a half hours to cover the distance.

Whilst in the city centre, we took the opportunity to head around the corner to the recently revamped Cloud 23 – perched on top of the Hilton Deansgate, Manchester’s answer to Duck and Waffle. Offering panoramic views of the city below, this carefully designed cocktail bar offers a selection of complex signature and classic cocktails – available at non-skyscraper prices. A hot ticket, reservations are strongly recommended. With swift service from the team of bar tenders, there should be more than enough time to enjoy a few pre-dinner drinks.

And how about The French itself?

The original French was a Manchester institution, one of the first in the city to gain the attention of Michelin inspectors, winning (and quickly losing) a star during the 1970s. This new incarnation is undoubtedly a major departure from its predecessor, designed to turn heads in a city which by its own admission has had an uncomfortable relationship with fine dining.

Those who have visited Rogan’s other establishments that are part of the growing empire will be familiar with the feel of the menu and particularly the unpretentious way in which British produce is crafted and showcased. However, even those who are not familiar with Rogan's style of cuisine will immediately feel at home in The French. Rogan has built his reputation by focussing on produce which is local, organic and often foraged. Simon has appointed Adam Reid as head chef and Kamila Plonska as restaurant manager, both whom have experience from working at L’Enclume, to ensure a consistent experience is delivered here.

Virtually untouched since its inception, the room has undergone an entire facelift. The wall fittings, chandeliers, thick stemmed glassware and enlightenment portraiture have been replaced with modern low profile furniture arranged around a pair of striking chandeliers which are without a doubt the centrepiece of the space.

For such a recent opening, The French is already running incredibly smoothly. Service was perhaps a little rehearsed at times, but never stale – ten courses and a few hours passed seamlessly. There is no option for a la carte at The French, instead 3, 6 and 10 course tasting menus are offered. These cost £29, £55 and £79 respectively – exceedingly good value when compared with similar events in London.

The waitress explained that the menu was completely unique and devised especially for this restaurant. True to a degree, Roganic or L'Enclume fans will spot elements of iconic dishes from these restaurants making an appearance on the menu. Smoked eel, Sole Fillet, Rose Veal and Cumbrian Hoggett are all seasoned favourites.

The meal starts with sparkling wine, English of course, a Rose from Hush Heath followed quickly with a double barrelled amuse bouche, a croquette of dock leaf and Parsnip crisp topped with cubes of smoked eel and pork are set out. Detailed descriptions are given by the waiters with the delivery of each course, the less attentive will be caught off-guard.
Other highlights of the meal included, Ox Tartare in coal oil, a sumptuously textured take on a classic. Fresh crab with caramelised cabbage, chicken skin and crow garlic was another favourite and a superbly succulent piece of Studded Cumbrian Rose Veal also shone. To finish, a surprisingly airy dish of Pear, meadowsweet, rye, buttermilk and linseeds revitalised the palate, unfortunately we lacked the stamina to sample the healthily stocked cheese trolley.

Anything else to highlight?

Work has already started on another project to update the Breakfast service at the Midland. This will see Rogan transform the existing breakfast space at into a Wolsey-like all-day dining offer. 'I was actually initially approached to take on the breakfast suite and turn that into something exciting, but after we got talking about the style of the food I was going to do, I realised that I wouldn't be able to do anything without first looking at what was happening with The French' Rogan muses. The project is slated for completion this summer.

Rogan’s tenure at the Midland is the start of an exciting period for Manchester. This isn’t a city known for leading the way in gastronomy and establishing a restaurant which serves only tasting menus is a bold endeavour. The rest of 2013 will see even more work undertaken to draw diners to The Midland, but as far as we’re concerned The French already has its feet firmly under the table.

The French at the Midland – Peter Street, Manchester M60 2DS. Find out more about The Midland.

Prices were correct at time of writing. Hot Dinners were invited to stay at the Midland.