Yes, you've spotted it. This was our second trip to New York in as many months. On our last trip, which you can read here, we visited some of the city's more established restaurants, but this time around we had our eyes and stomachs set firmly on the new. Turns out September is the perfect time to visit as it represents the start of the fall opening season as restaurants try to open their doors once everyone's back in the city after the summer and in time to get the Christmas crowd in. Here's a round up of what we ate this time around...

We flew Heathrow to JFK with British Airways, making the last use of @hotdinners2's handy access to standby tickets before he moved to pastures new (sob!). That meant that we had the chance to try BA's Club World food. And it's pretty darned good. The standout course was a starter of grilled tiger prawns marinated in Ras el Hanout with smoked hummus and a Moroccan salad. Punchy flavours meant it translated well in the pressurised cabin and it went down rather nicely with a glass of Clos Pegase Chardonnay from Mitsuko's Vineyard in the Napa Valley.

Upon landing, after some unavoidable shopping and a quick pit-stop in our favourite Korean fast-food joint Kyochon, we headed out to our first new opening of the trip. This was Dirty French, from the people behind Torrisi, Carbone and Parm and we were there on opening night. Their first non-Italian restaurant had been getting a big deal of press in NYC - with the main question being what would be their take on French cuisine. As it turns out, it was nothing like we expected or have seen before - so exactly what we're looking for from a new restaurant in New York. 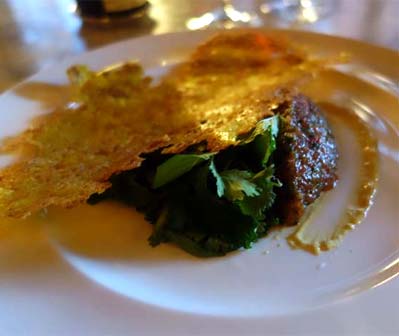 The food is best described as French mixed with Moroccan but served in classic French brasserie style. Our meal kicked off with a meltingly good flatbread and of the starters the best we had was the piri piri tuna tartare served with Indochine crepes.

It's hard to resist an old classic, so when we spotted duck á l'orange on the menu we wanted to see their take on it. We still can't fathom out how they managed to keep the skin so crispy with such tender duck beneath.

For dessert we squeezed in the beignets with a caramel chicory dip. An unusual combination that worked .

So Dirty French was a big success, particularly given this was its first night, and well worth a visit. Although be warned that as with other Torrisi restaurants, the portions are huge. Go early so you can try a cocktail at the bar too.

We were so full after this we had no room for anything other than a drink at our next stop - the rooftop bar at the Park South hotel. We love a good rooftop bar and few do them better than New York. So we have nothing but high recommendations for this place where we had a great Txakoli Rose on a balmy September night in New York. The Italian menu - by respected Boston restaurant O Ya - features lots of small bites and has been well reviewed so it's definitely worth a try as long as you haven't pigged out on Chicory beignets first. 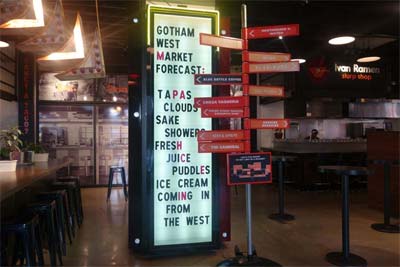 On day two, we really wanted to try out a couple of new food courts that have been getting a lot of hype recently. These are one thing that New York really seems to be doing well - almost as the next step on from the food trucks. Far from being the kind of place where fast food goes to die (like some London courts we could mention) it's actually where highly rated restaurants are getting second outposts (on in some cases sole outposts). We'd already been impressed by the food court under The Plaza hotel last time, and this time we first headed out west to 11th Avenue to try out Gotham West Market.

Gotham West is also the place where you can try the famed Ivan Ramen (although we were a bit ramened-out by all we'd had in London at this point) and Seamus Mullen's (who's coming to the Mondrian this month) El Comado and also The Cannibal. For our trip we went first thing in the morning to check out the breakfast tacos at Choza Taqueria which turned out to be a great start to the day. Well worth a visit even if it's a bit of a trek from midtown.

Next we headed down to the Financial District to check out a food court that wasn't yet open on our last visit. This was Hudson Eats at Brookfield Place - pretty much the finest looking food court you'll ever see with some great food to be had. We tried some excellent sushi from Blue Ribbon and a brisket bun from Mighty Quinn's BBQ. With a wonderful view over the Hudson with some VERY expensive super yachts heading out of the harbour for the weekend, it's a great spot to catch up on a few restaurants if, like us, you just don't have time to visit all the originals. It's absolutely perfect for a food tourist and as it's only a few minutes walk from the World Trade Centre memorial, it's well worth walking over if you've come to visit that first.

Before the evening meal, we went along to Bar Sardine, which is the transformed Chez Sardine that we went to last year. It's now been transformed into a bar which, frankly, is a bit of a shame. Apparently they do a good burger, but we much preferred the Japanese izakaya style of Chez Sardine as it used to be. It's a good pitstop though for a glass of fizz and some oysters. 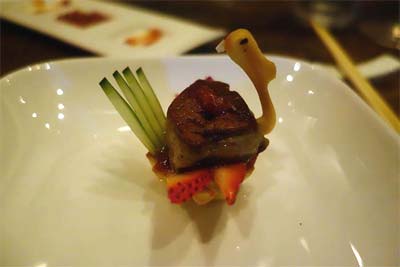 Following that, our main meal of the evening at Decoy. This is under Red Farm, a place we've wanted to visit for a while but we've frankly been put off by tales of large queues (we're really not ones for queuing, even in London). However you can book Decoy as long as you're coming in for their Peking duck feast - which is what we did.

The feast begins with your choice of two small plates to start - we chose wisely as the oysters on yuzu ice plus a wonderful foie gras strawberry tart made to look like a swan were beth winners and - crucially - not too big. That's because the duck itself was huge and easily one of the best we've ever had. We're not sure we needed a side although it is included in the price (the rice we ordered could have been a course in its own right). Hugely good fun even if we needed an iPhone torch to read the menu by.

Finally we popped along to another new opening, Hamilton's Soda Fountain, a classic style diner/soda fountain in the West Village. It's been getting good reviews, but we have to admit that we were a little underwhelmed; the shakes we got from Shake Shack the next day were far better. 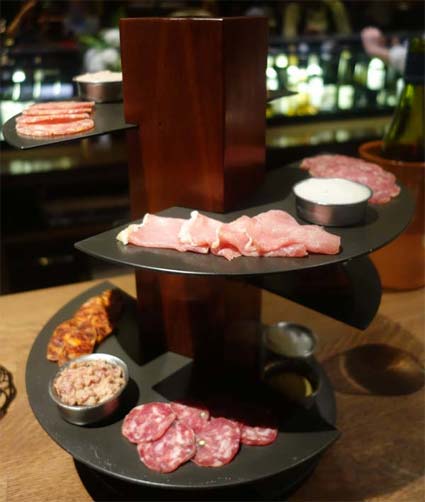 On Saturday we headed back to the East Village to try another new-ish and extremely highly rated restaurant for brunch, Estela. Unlike some of the restaurants we'd already been to on this trip we were extremely pleased to see that the small plates at Estela were actually small. They'd just launched their brunch menu and the standout for us was the Danish with avocado pancetta and poached egg. You really won't want to share this. We didn't have (and regretted not ordering) the lardo and jam on toast - but did see it at another table on the way out. We loved the food at Estela, but did think the New York charm and service was a little missing in action on our visit.

In the evening, we popped into another brand new opening - an offshoot of the three Michelin-starred Le Bernardin the Aldo Sohm wine bar (named after the owner who's also Le Bernardin's head sommelier). This is an excellent wine bar and one that's so close to the Fifth Avenue shops that it'd be a crime not to stop in for a glass if you were around this way.

The room looked wonderful (we particularly liked the way you could sit facing each other at the sides of the main bar - not something we've seen elsewhere. And we were entranced by The Tower - an massive rotatable charcuterie platter which you can see in action here. That plus an extremely reasonable wine list for a place so potentially upmarket make this an easy recommendation.

We followed that up with a trip south to Chelsea to try another wine bar, the second Corkbuzz which is particularly notable for chef Missy Robbins's menu. The A Voce consulted on the menu. We loved the whipped egg toast with bottarga (like a deconstructed devilled egg) and the Panzarotti filled with ricotta and mozzarella and with a wonderful "30 clove sauce". The fact that we kept ordering more and more off the small dishes menu is testament to the excellence of the cooking. That paired with the wine list and lovely staff let to a great evening there.

Day 4 - out to Williamsburg 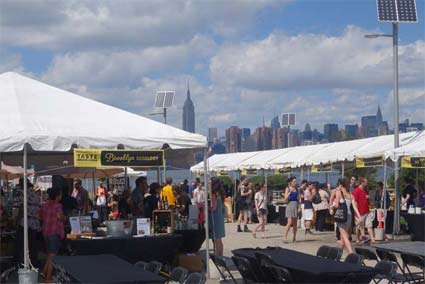 On our last day, we took a trip out across the East River to Taste Williamsburg - a riverside festival to celebrate the best of Williamsburg and Greenpoint's food. We were VERY glad to get there early as the later crowd made the crowds and queues at Meatopia seem sedate by comparison.

Definite highlights were the both porchetta sandwich from Aurora, the extremely good bluefish pate from Delaware and Hudson and a mini platter by Teddy’s Bar and Grill with BBQ corn, cubed watermelon, and a beef brisket slider. We also liked the low price of the event ($25) which gave you four food vouchers and two drinks tokens. The servings were small but it still seemed like extremely good value. It's worth going to next year if you're in the area around this time.

On the other hand, if you're going over in the next few weeks, it's worth heading to Madison Square Eats in Midtown, which brings together lots of chefs and food trucks in midtown until the beginning of October.

Before we signed off from New York for another year, there was time for one last cocktail at the new Nomad Bar - part of the hotel where we had an amazing truffled chicken last year. When we have more time we'll definitely return to try the burger and the truffled chicken pot pie...

Find out more about Taste Williamsburg

Find out more about the Nomad Bar