What is Mollie's Motel?

This motel, diner and drive-through is the latest opening from Nick Jones of Soho House. It's all about improving the motel experience by just focusing on the really important things - like a really good bed, good wifi, decent breakfast and more. So it's not a destination in itself, but pretty damned handy if you're heading out of town and want a proper, comfortable base for the night. Heading out to a wedding in the Cotswolds, for instance? This will be very handy.

He's intending to roll these out across the country - watch out Travelodge! - and we were invited to try out the first one in the Cotswolds.

It's right on the A420 between Oxford and Faringdon, in the Cotswolds (it's also about 45 minutes away from the same group's Soho Farmhouse). When they say motel, they mean it - so it's part of the Buckland Services (which also has a petrol station and M&S shop). The diner is right on the road and the motel is tucked in behind it at the other end of the car park.

The rooms are probably the all-important linchpin of the motel - making sure you get maximum comfort - without paying the earth. There are 79 of them - and have a design that's pared-down chic with only the things you really need. So there's a huge flat-screen TV - no movies, but it'll connect to your phone/iPad via Chromecast - so you can put Netflix/ iPlayer/ youtube etc on there at your leisure. There's a lovely double bed covered in Egyptian cotton, walk-in rainforest shower and Cowshed toiletries. What there isn't is a phone - because why would you need one - and you check in and out via the mobile app) - or fluffy robes or chocolates on the pillow before bedtime.

Our room was big enough for a table, chair and armchair too. If you need water, there's a free water fountain with paper cups in the hall outside. Families can book interconnecting rooms and there are also bunk rooms for groups of up to four. 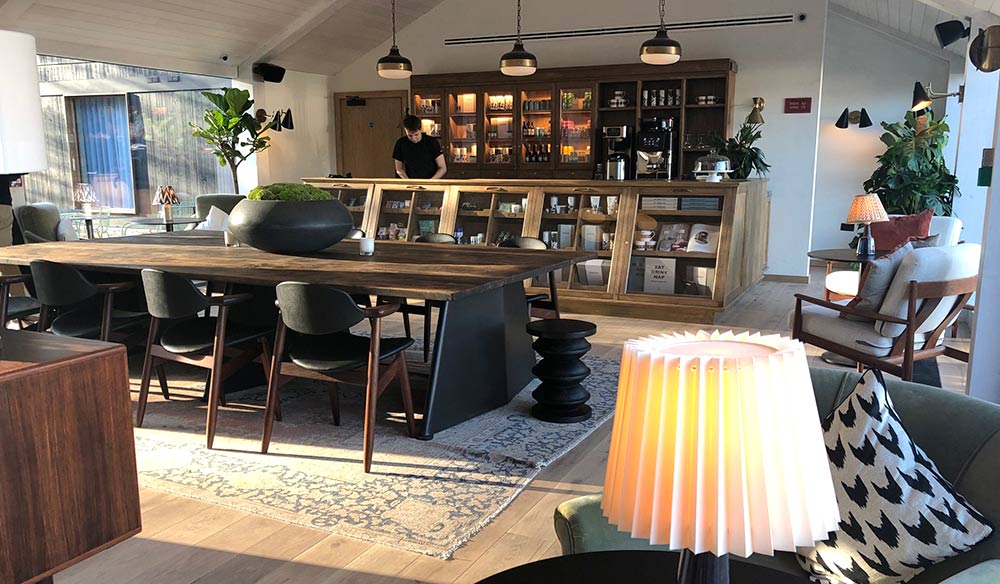 And how about the lobby?

The motel itself has a really nicely designed lobby called The General Store which is open 24 hours and offers beer, plus bottles of wine and Prosecco along with snacks and brownies (they've a good selection of American snacks). Here, guests can get tea and filter coffee on the house, there's also space to work with access to Wi-Fi and charging points. 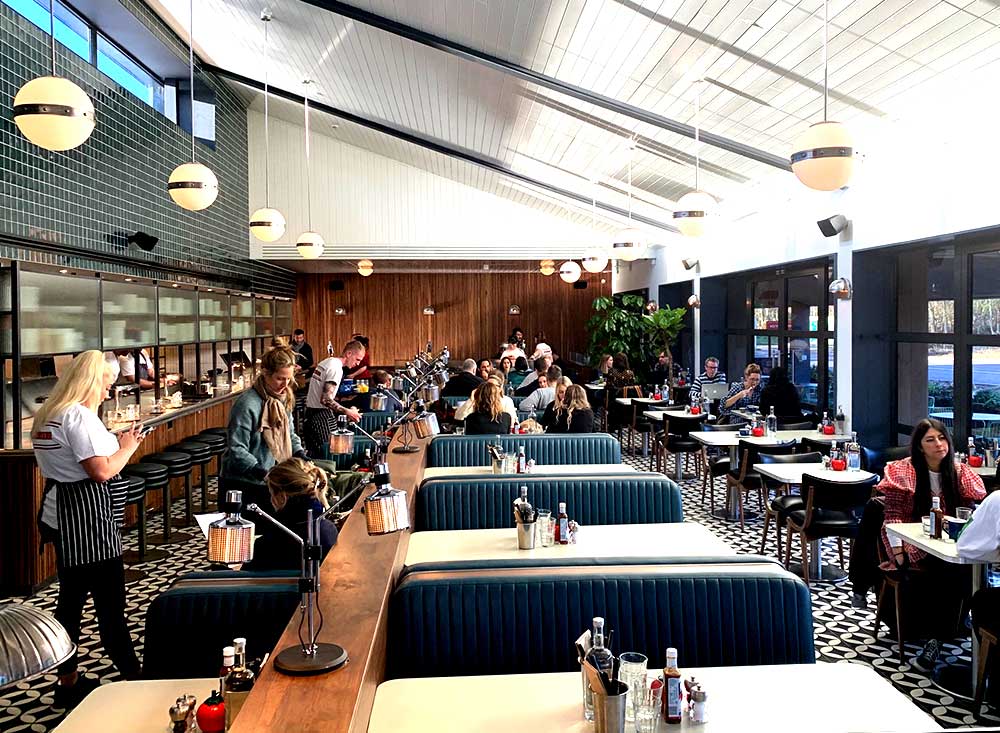 Across the car park is the diner. We're about a million miles from the world of Little Chef here

it's is a huge, purpose-built homage to 1950s America. If you don't want to sit in, there's a kiosk for 'drive thru' food to grab and go (think breakfast baps, chicken bags and Dirty Burgers) but the room itself is beautifully designed and worth spending time in. There's counter dining all along the pass, booths for two opposite that and booths for four in another row, along with a larger communal table at one end. There's also plenty of room to sit outside if the weather's good.

The food is a mix of other things you've seen from Soho House - Dirty Burger, Filth, Chicken Shop and a few extras besides. We were attending the opening party here, so we didn't strictly sit down and work our way through a three-course menu. Instead, they pretty much brought us everything that's available on the menu. We couldn't get through it all (even though the chicken plate smelled really great)  but here's what we had that we thought was really good... 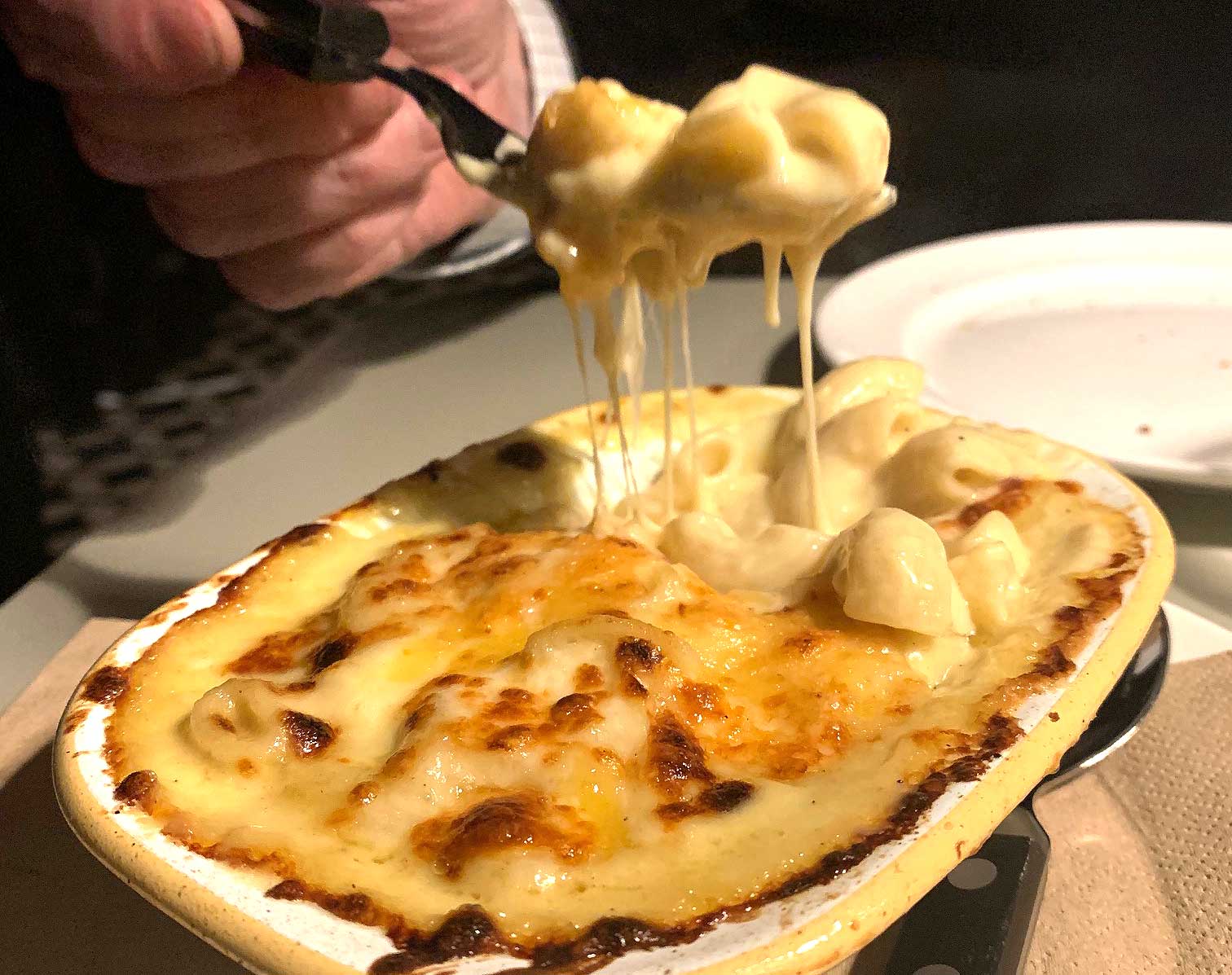 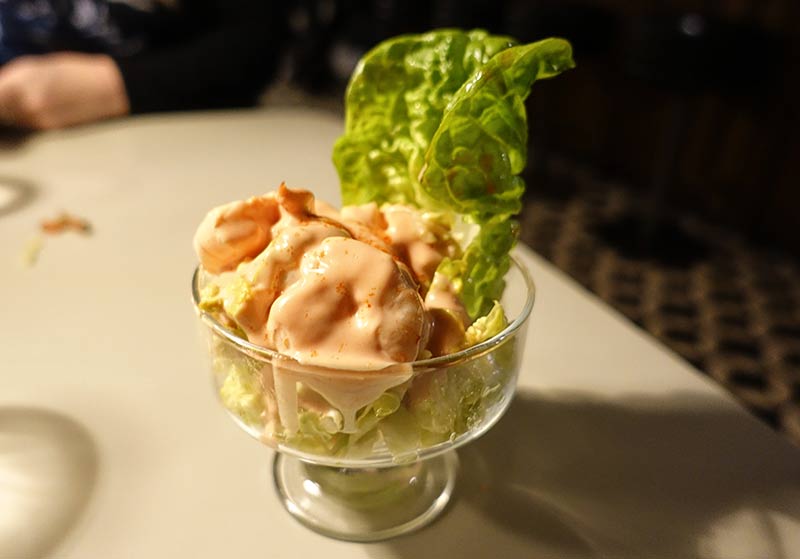 Prawn cocktail with Marie Rose sauce (£6). A proper prawn cocktail always goes down well. This was good but they really need to get that sauce down to the bottom. 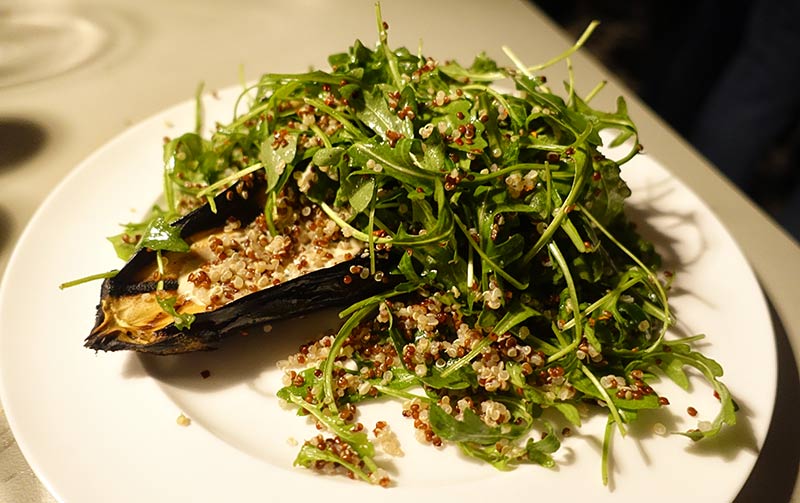 We'll have an aubergine with our rocket, please! Honestly, it is hidden in there - and the mix of aubergine, quinoa, tahini and chilli make this a top veggie dish (£9). 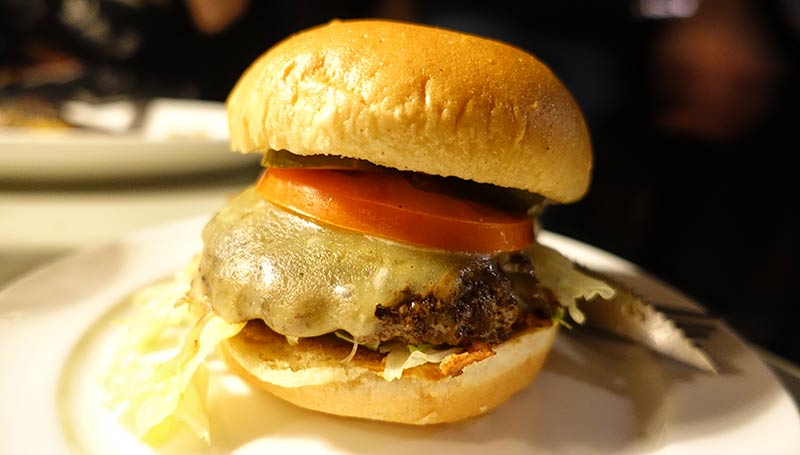 Of course, all the dirty burgers are on the list - and just like you'll find them in the other branches (this is the standard Dirty Burger at £7). And for vegetarians/ vegans, Gizzi Eskine's raved-about Filth burgers are also on the list. 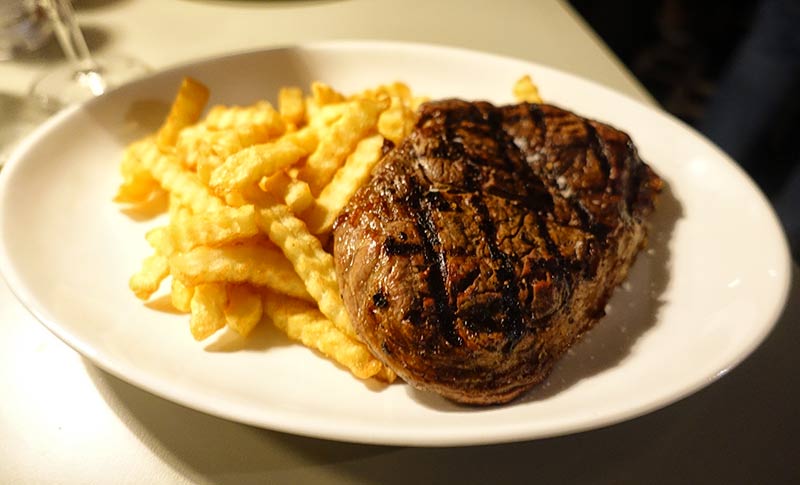 10oz locally-sourced ribeye steak and fries (£15). This was actually our top choice on the night - a perfectly medium steak (very impressive given all the food they were turning out on the night). Those chips were bloody good too. 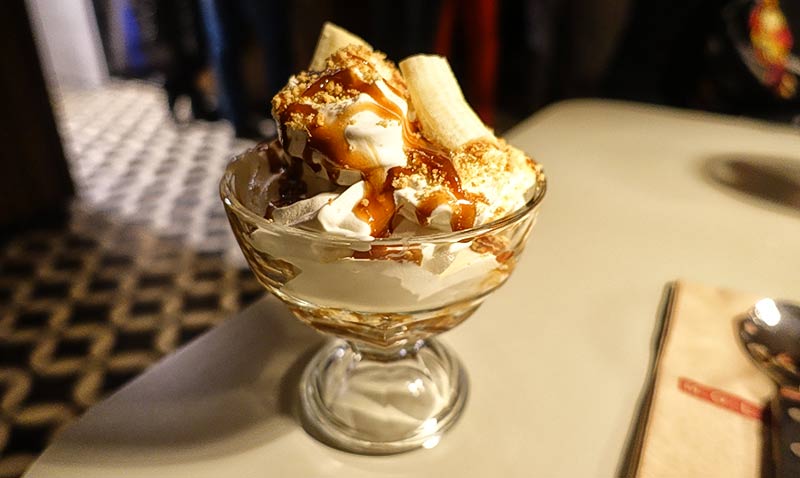 And dessert - a couple of sundaes are on the list, called "Mollie's Jollies". This is the banoffee version (£5 - and the one we think you need to go for).

And the all-important breakfast

Breakfast the next day in the diner has actually put to shame some of the posher hotels we've stayed in. The Full English is served all day, costs £9 and consists of eggs however you like, a sausage patty, lovely thick cut bacon shop, hash brown, tomato, beans and toast. It was very good indeed.

If you're after something smaller there's also grain bowls and breakfast bap deals (one of those plus a hot drink for £6). 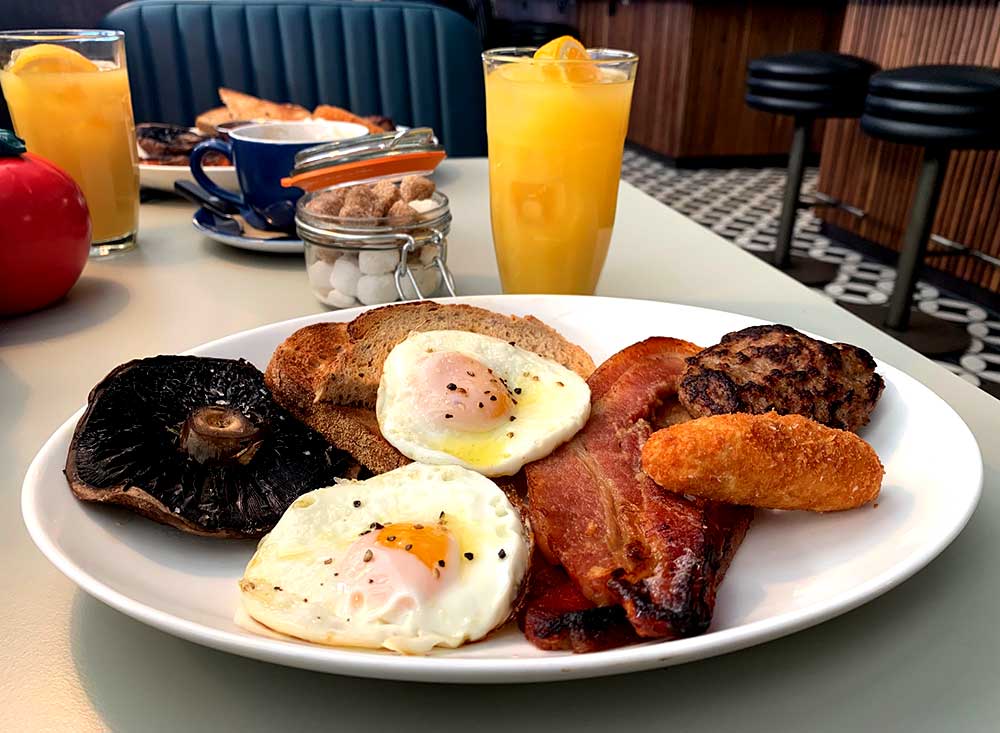 A cracking breakfast the next day. Easily enough to set yourself up for any journey (£9).

What else is there to do around here?

If you're up for a country walk, there's a lovely looking 6-mile circular route that takes you along this part of the Thames and past well-rated local pub The Lamb Inn at Buckland. If you're staying for the weekend, you should make time to visit The Bell - which is currently No 25 on the 50 Best Gastropubs list and is well reviewed by Tom Parker Bowles, Giles Coren and Marina O'Loughlin. It's just a 20-minute drive away.

If you're up for something high end for lunch - then Raymond Blanc's Le Manoir is only half an hour's drive away.

As mentioned, Mollie's isn't a destination hotel/restaurant. Instead, it's filling a gap in the market for people who need a base for the night - but want a good night's sleep and decent grub if they're hungry at any time. Mollies easily meets both of those criteria. They're already planning a couple more openings in Bristol and Manchester with a lot more to come. Pretty soon, we think you'll be staying in one of these yourselves.

Hot Dinners were invited to Mollie's. Prices are correct at the time of writing.

Where is it? Buckland Services, Faringdon, Oxfordshire SN7 8QU

How much? Rooms are just £50 to start