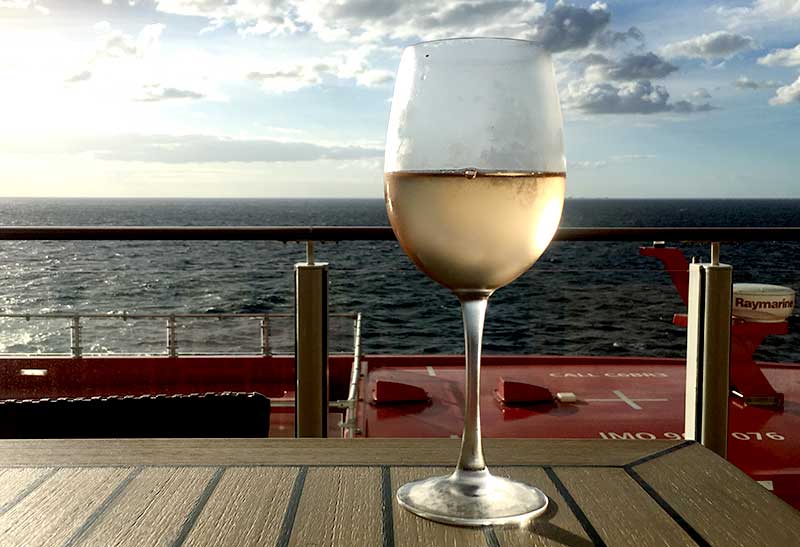 As our readers will know, we've done a few cruises in our time and - chosen carefully - they can be a really easy way to tour loads of interesting places, in comfort, with very little effort on your part. You just turn up, unpack, and for the next week wake up somewhere new each morning.

For cruise companies, finding something that distinguishes them from their competitors, often travelling similar routes, is key. The quality of the food they offer has become an important element, which is how we got talking to Norwegian Cruise Line in the first place. Their ship Norwegian Esacape is just two years old but already has a reputation for having some of the more interesting food options at sea. When it launched, it did so with a number of exclusive-to-sea restaurants from top chefs to cool American restaurants.

Key among those are two restaurants by Jose Garces. He may not be so well known here, but the chef is a household name in America. He won the popular TV show Iron Chef in its second season - and has an impressive roster of restaurants, most notably in Philadelphia where he runs Amada, Tinto, Distrito, Chifa and, most recently, Village Whiskey. In 2009 he won the hugely prestigious Best Chef in America James Beard award. 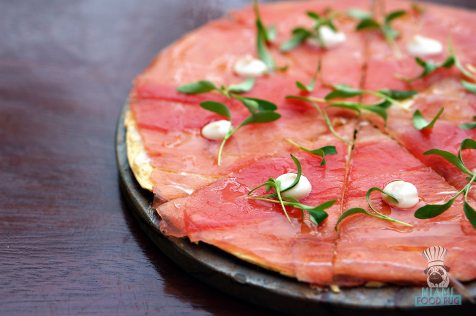 To make sure you're actually there on time to join the ship, NCL prefer for you to arrive in Miami a day ahead of departure. That was no problem for us,  as we'd never been to the city before and loved the chance to get a quick look around before we set sail. Miami as a food destination was completely new to us (we're much better at New York).

The food scene there is actually really interesting. You can go old school - there are varying reports on whether Joe's Stone Crab (founded 1913) is worth trying, but the general consensus is that in stone crab season it is probably worth a trip. Other key recommendations we'd had (from restaurateur Jonathan Downey were Alter, Sushi Garage and Macchialina).

But with just one meal to have there, and a jetlagged to the eyeballs teenager in tow, we decided to head for the beachside Delano hotel and soak up some glamour in its garden restaurant Leynia. Miami food blogger Miami Food Pug dubbed it 'meat heaven' and the NY steak from the garden parilla was pretty good, but the dish that you really want to come here for is their tuna 'pizza' - thin tortilla topped with tuna sashimi, truffle essence and anchovy aioli. Oh and the margaritas worked in a kill or cure kind of way. 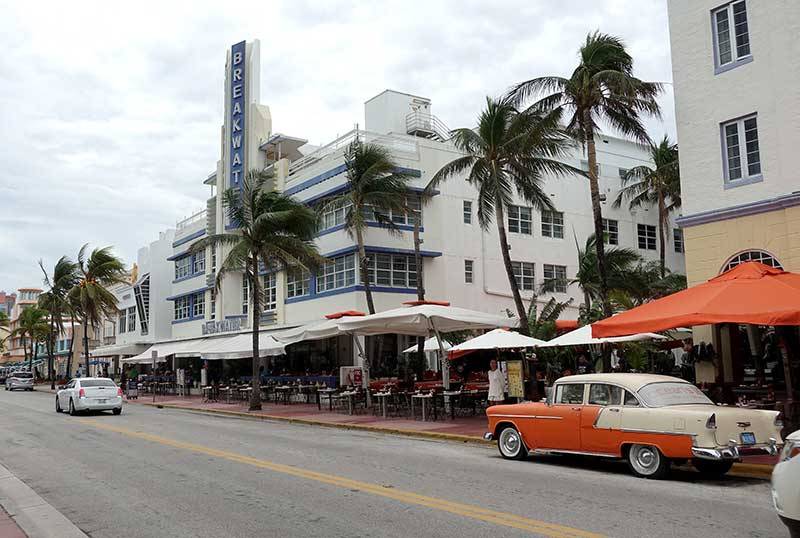 With not even 24 hours in the City we wanted to stay in the heart of the Art Deco district. Hotel Breakwater was right on the beachfront in Miami's South Beach and ticked all the boxes with a sea-facing pool up on the first floor - and incredibly helpful staff.

The Norwegian Escape really is a floating city. But even with 4200 guests on board it never felt too hectic. Our cabin was a Balcony Stateroom, which had a separate seating area, decent size bathroom with shower and - of course - a balcony complete with table and chairs for watching the ocean go by. 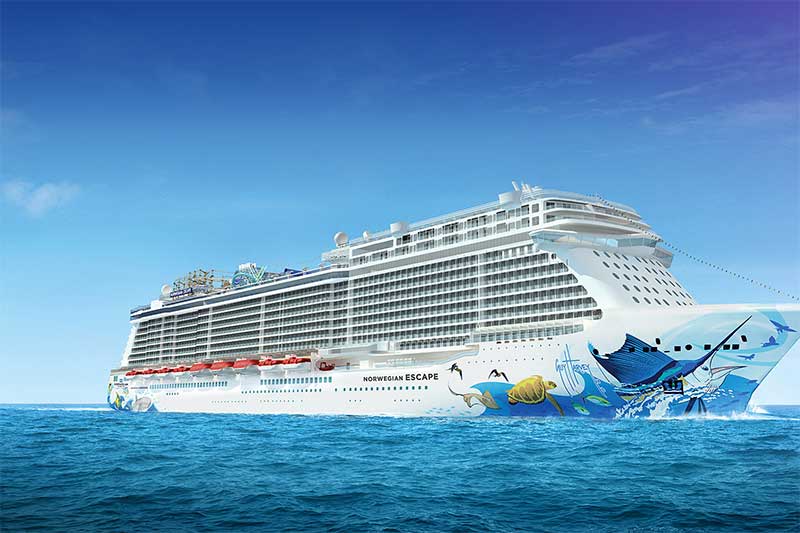 Outside of the eating and drinking there's a lot to enjoy on board. If you're travelling with kids, the waterpark with four slides plus a ropewalk course is going to keep them busy (as are the kids clubs and teen hangout area). There are two main pools, four hot tubs, a spa, gym, theatre and comedy club. We're a sucker for piano bars and their duelling piano show was brilliant.

You can jog on deck, watch a movie, or just sit and soak up the sun. Let's face it - you are not going to be bored.

Where to eat on board

As with most cruise ships, the dining offering is split into the standard restaurants where you can dine for free as part of your all inclusive package and premium dining for which you pay an additional fee. We enjoyed our dinners in the included Savor restaurant. But the fact remains that there's a lot more interesting stuff to eat on this boat. Here's the best of what we ate on board. 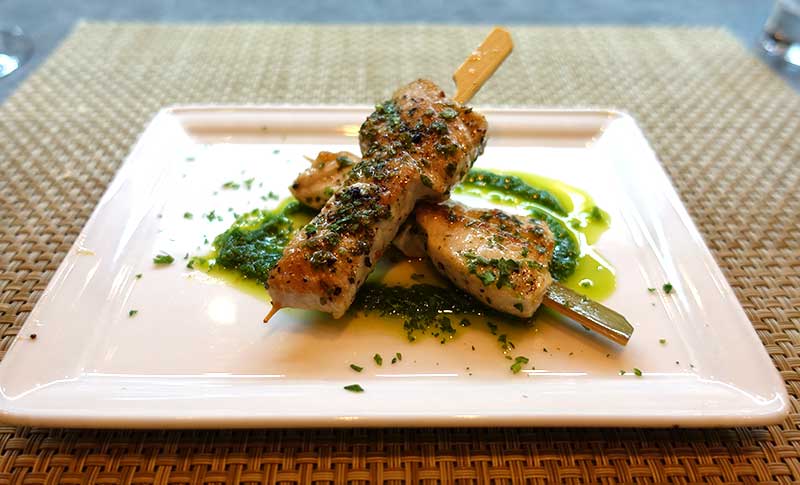 Wafer-thin Jamon Iberica for $3, Iberico Secreto with chimichurri for $8 - there was a lot to like at this casual tapas spot. Patatas bravas came as fried discs of potato topped with a deep yellow alioli and the salt cod croquetas rivalled some of the best spots in London. 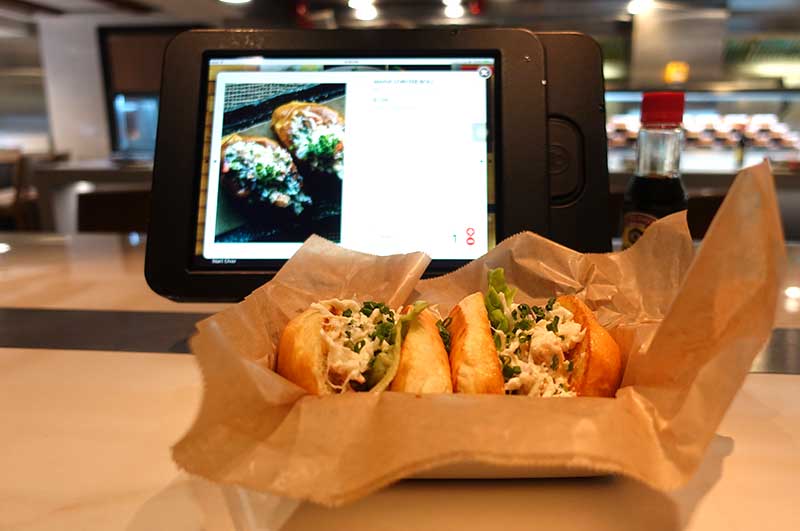 Food Republic's lobster rolls - on screen and off

The Pubbelly chain of restaurants in Miami comprises of a Asian gastropub, sushi spot and tapas joint and is very popular. At sea, they've gone for a crazy fusion of foods from all over the world covering everything from ceviche to sushi and baja tacos. It shouldn't work but it does. All the seating is up at counters and - if you recall how things worked at Rex & Mariano  - you order via iPads.

Lobster rolls ($7.50 for two) were stuffed in buttery brioche rolls, ahi tuna tataki sat on top of stracciatella and really good oliver oil ($7) and we'd go to sea again just for a taste of the pork belly kushiyaki sticks which came glazed with butterscotch miso and corn powder ($6). 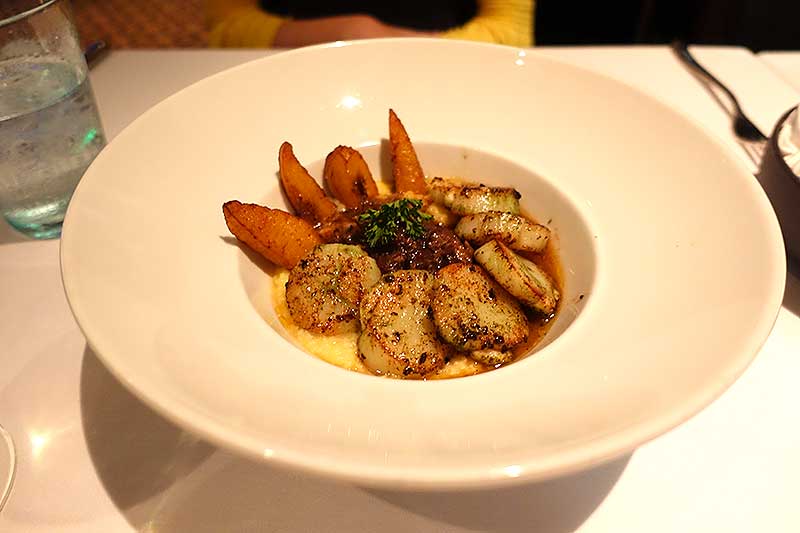 Probably the most prestigious restaurant on board - expect Latin dishes with a Cuban influence here. Two dishes in particular stood out from this meal; chilled lobster salad with fresh crab, purple potato, chiplot and a sesame garlic crumble ($6.95) and a bowl of utter comfort food which was pan roasted scallops with braised oxtail and corn porridge ($16.95). 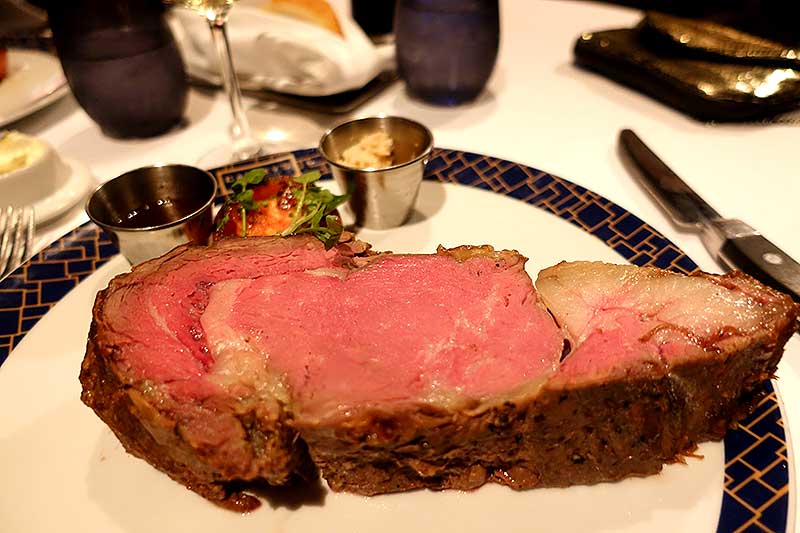 The massive steak at Cagney's

No American ship could set sail without a decent steakhouse on board, and on Escape that's Cagney's. Here we kicked off our final dinner of the holiday with a masssive shrimp cocktail served up with a tangy Jack Daniels cocktail sauce followed by a 16oz actually-bigger-than-my-head Queen Cut Prime Rib of Angus Beef (£25).

There are LOADS of bars on board - 11 in total. So if you fancy a margarita from singer/restaurateur Jimmy Buffett's Margaritaville you're in luck. There are also great cocktails from Miami's oldest bar Tobacco Road (which was torn down in 2014).

Our favourite spot on the boat was the The Cellars - A Michael Mondavi Family Wine Bar which was one of the stretch of restaurants and bars on Escape's Waterfront which meant you could drink outside on the deck. A glass of decent French rose here in the sunshine was a pretty good way to while away time.

The palest of French rose at the wine bar on board

Our original route itinerary - to cover the Eastern Caribbean just after Hurricane Irma - wasn't going to happen. So while those places got back on their feet we were rerouted along the Western Caribbean. We would start in Miami, head from there to Honduras and return back via Belize and Mexico. The itinerary that the ship is now back covering is St. Thomas (US Virgin Islands); Tortola (British Virgin Islands) and Nassau in The Bahamas.

We can't say what we would have done in those alternate ports so here's what we got up on to the ports we did stop at. 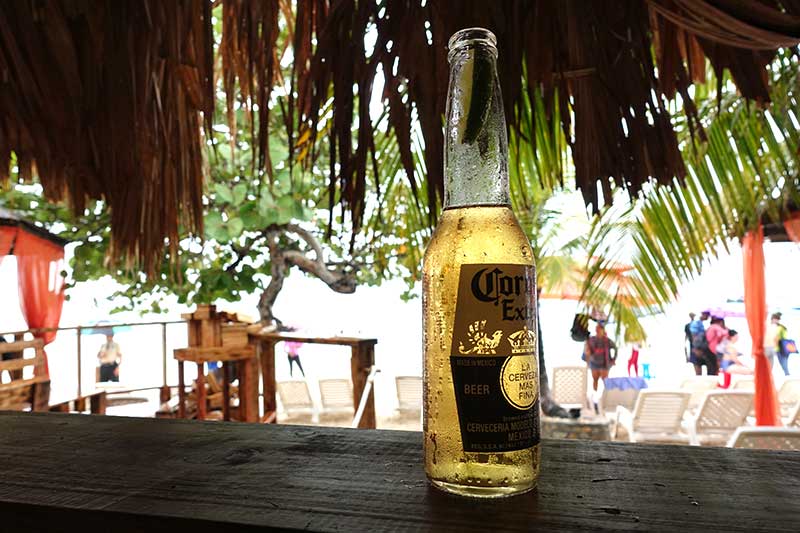 This Honduran island boasts amazing diving - you might just want to skip off the boat and do that all day. We booked a trip that brought us round the island - it's just 45 miles long and barely 5 miles wide - taking in a visit to Victor Bodden's Monkey Business where we got to feed and hold a sloth! We had enough time for a quick stop to Mayak Chocolates to take back some of their homemade chocolate. And then we went straight to a beach club for quesdillas and beer on the beach. Heaven.

This man-made island was created by NCL in partnership with the Belize government. So if you just want to walk off the ship and sit by a huge pool or on the beach you're in luck. We were hoping to take the taxi boat that heads off first thing in the morning to the nearest town of Placencia on the mainland. But it was pouring from the heavens, so I'm afraid the most we saw of Belize was the hour we spent mournfully waiting for the deluge to desist before returning to the boat. If the weather had cleared up, we would have headed for The Lunch Box in Placencia which apparently does a very decent conch fritter which is a local speciality in this part of the world. 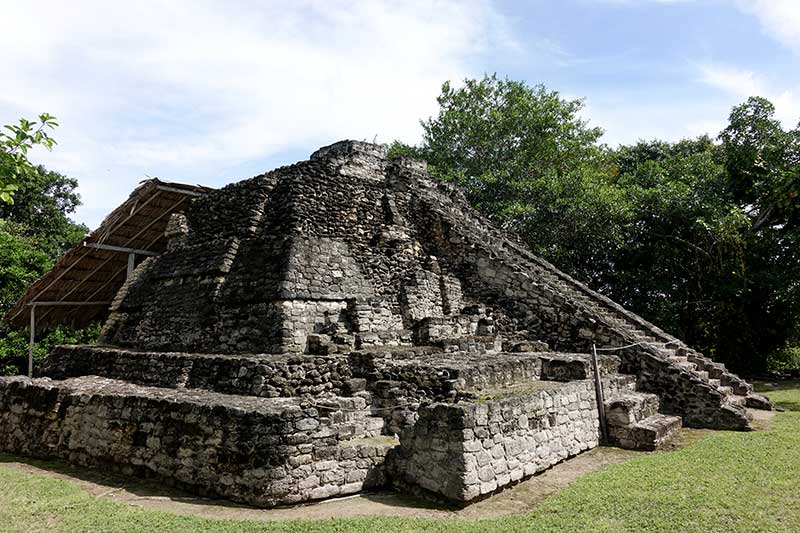 We'd heard a lot about all the amazing Mayan ruins to see in Mexico and the Chacchoben Mayan Ruins are less than an hour's drive from where the ship puts in. The ruins themselves date back to 700AD although there was a settlement here since 200 BC but it wasn't rediscovered until 1972. It's only been open to the public in its excavated form since 2002 and although there are three huge pyramids to gawp at, we thought it was surprisingly untouristy. Try and find a guide who'll stop on the way back to the coast at the pineapple vendors at the side of the road - we've never tasted anything so delicious. 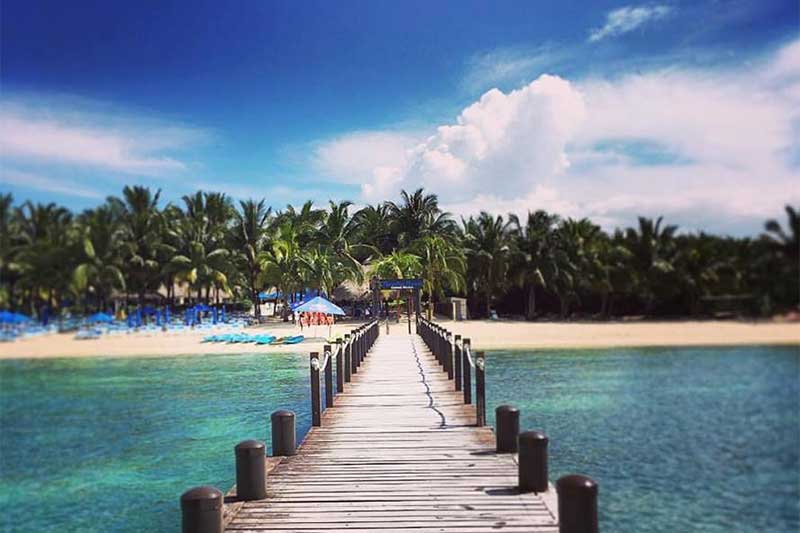 Cozumel - yes we wish we were still there

This gorgeous island, just off the Yucatán Peninsula, was our final port of call and it felt like they saved the best till last. Here you'll either want to dive or - like us - head straight for the amazing white beaches. It's easy enough to grab a taxi from the port to one of the many beach clubs along the seafront. We went for Paradise Beach. The entrance fee was $3 with a minimum $10 spend on food and drink. Sitting on the beach eating great guacamole and chips while checking the weather app to see just how cold and rainy it was in London - priceless. 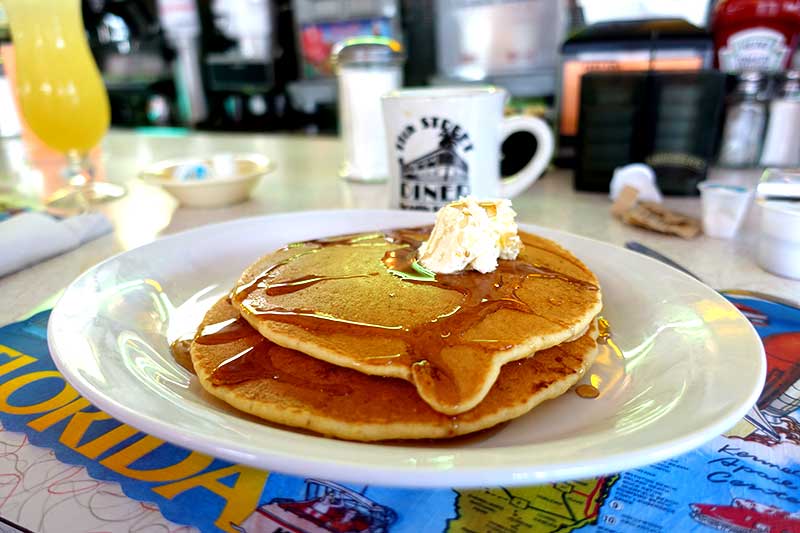 Pancakes and maple syrup at the 11th Street Diner in Miami

The ship returns back to port first thing in the morning and as our flight out of Miami wasn't until the late afternoon that left a bit of time for shopping and eating. The teenager had declared her trip here wouldn't be complete without a trip to a 'real American diner' which meant a visit to the 11th Street Diner. This 1940s diner was originally built in New Jersey where it operated for over 40 years before being dismantled and shipped out to Miami. For breakfast we opted for a short stack of pancakes and syrup and it was just what we needed/wanted.

The whole of Norwegian Cruise Line recently went Premium All Inclusive, which in practice means that most drinks, soft drinks and service charges are included. Dining at the standard restaurants is also included, but you'll have to pay extra to dine at the more interesting restaurants. So unless you head straight for the very expensive spirits or bottles of wine, you can enjoy most of your stay knowing you won't have a hefty bar bill at the end.

Who we flew with

Hot Dinners flew to Miami with TAP Air Portugal. Head here for full details of our flight and on-board food with their Michelin-star chefs.