[SIGPLUS_EXCEPTION_SOURCE] Image source is expected to be a full URL or a path relative to the image base folder specified in the back-end but /blog/2012/croatia/gallery is neither a URL nor a relative path to an existing file or folder.
0
Shares

Hot Dinners has a foodie weekend in Croatia 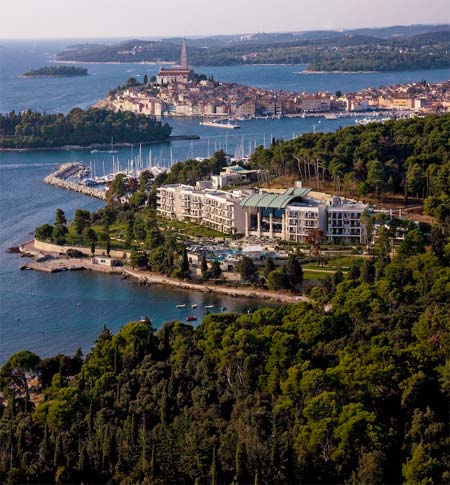 Croatia's a foodie destination. Who knew? Hot Dinners' recent jaunt to the Istrian peninsula proved that in just a few short days you can see, smell, eat and drink to your heart's content food and wine which has been produced with total passion.

We were put up at the mightily swanky Monte Mulini - a gorgeous seaside hotel just a five minute walk from the town of Rovinj. And while the infinity pools, ultra modern interiors and spa would be worth visiting this for alone, the food at the hotel is a distinct cut above the usual coastal spot.

Our first night's meal in the Wine Vault restaurant was an extraordinary tour of the region's food and wine. Chef Tomislav Gretic created some astonishing dishes (see picture below right of one of them) while award-winning sommelier Emil Perdec (who has a list of 550 wines at his disposal), with the help of wine expert WineChap Tom Harrow, put together matching wines by the glass for each course for us.

Your first movements outside the hotel should be to Rovinj. This Adriatic town has long been a glamour hotspot - attracting the likes of Liz Tayor and Richard Burton back in the 60s. Now it's home to a chic yachty set. Happily, rather than branches of Valentino popping up all over the place, there's still plenty of local flavour - little bars and cave-like restaurants. There were lots and lots of coffee spots which our guide was keen to tell us was the local's true passion.

The food market in Rovinj is small but perfectly formed and there's a cracking fish market if you've decided to come here and go self-catering. Pop into the standing room only Grota bar right beside the market for a quick Aperol Spritz to keep you going.

Everyone says that the bar to go to in Rovinj is the champagne bar Valentino. And actually calling it a bar is a bit of a misnomer - the 'bar' itself is a room off the street but you'll have to take to the rocks on the seafront behind that for a seat. If you're too lazy to leave the hotel, the cocktails there were laughably cheap for a five star hotel (around the £6 mark) and we can attest to the strength of a crackingly good Sidecar they whipped up for us. 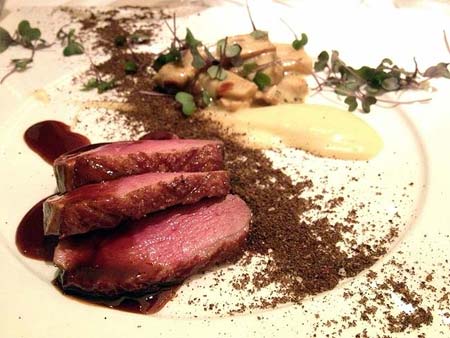 A popular jaunt in this part of the world is the 'fish picnic' whereby you take a boat out to one of the nearby islands and get dropped off in some otherwise inaccessible spot for a alfresco lunch.

We took a version of this out on the Lim Fjord - a spectacular part of the nearby coastline. Our fish picnic consisted of tomato, mozzarella and rocket salad, baguette with the local Croatian prsut ham and cheese and a massive fruit salad.

At every meal we had here, we were constantly being surprised by the quality of the Croatian wine - particularly anything with the local Malvasia grape. We visited two very different vineyards while we were here - both of whom are open to the public, as long as you call ahead to check someone's around.

Roxanich wines are the labour of love of Mladen Rožanic who creates wines according to strict biodynamic ideas - so grapes are only picked at a certain part of the lunar calendar, no chemical fertilisers are used and the wines are neither filtered or fined. His tasting room is rough and rural with platters of local sausage and cheese put out to complement the wines.

Wine tasting couldn't be more different at Trapan near Pula where Bruno Trapan has built a modernist cube of a winery with a tasting room that wouldn't look out of place in California. Here we tried the wines he says he wants to be 'drinkable' and we found everything from the Rose to the Nigra Virgo was just that.

Incidentally if you're looking to find these wines at home when you come back and don't fancy trying to ship them back with Ryanair try either WineChap, Mountain Valley Wines or Green & Blue wines in East Dulwich, which have a good stock. It's also worth trying Pacta Connect which imports both the wines and oils from this area.

What about the olive oil?

They're as passionate in this part of the world about their oils as they are their wines. Less than an hour's drive from the hotel is Chiavalon - a multi-award winning olive oil producer where the tasting room looks more like a chemistry lab. As owner Sandi explained, the groves here used to produce the oil for the Roman Emperors and they're apparently at the perfect distance from the sea and equator so the olives don't get too hot. The antioxidents make it a tricky oil to just drink - as we were instructed to in the tasting - those peppery polyphenols will tickle your throat, but it works a bomb on a simple tomato salad or mopped up with good bread. 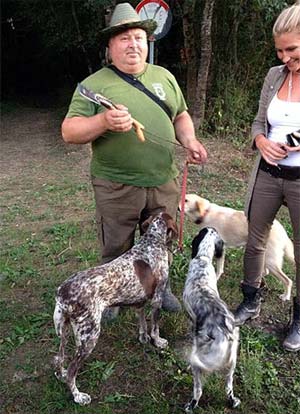 It is, and one place definitely worth visiting in this part of the world is Zigante, home of truffles. In addition to the shop which sells all manner of truffle related food, the restaurant focuses entirely on dishes made with the truffle, so we started with whipped fresh cheese with truffles, progressed through pasta with truffles, fish with truffles - you get the idea. And we ended the meal with a truffle ice-cream which was strangely very good.

They also arrange truffle hunting trips which is how we found ourselves in a nearby wood as dusk fell, with a musician-turned-truffle hunter and his dogs (see picture right). We did manage to find two truffles, surprisingly easily, but then maybe we were just very lucky.

In addition to our meal at the Wine Vault - we also had a minimalist tasting dinner at the hotel's sister property Lone - Croatia's first Design Hotel. Here, the courses ranged from brilliant cauliflower foam with truffle and raw scampi to a so-so prawn souffle, but the setting is quite beautiful. And if you want to get out into Rovinj, we hear that La Puntalina perched right on the rocks in the old town is also very good.

All round this part of the world you'll find slow food konoba (or taverns). They're often in people's homes - an early sort of supperclub - and the one we visited while we were here was Konoba Milana - run by an Istrian proscuitto (or prsut) producer. You can take a gander at hundreds of hams hanging up to cure and then sit down to a meal where most of the courses feature the ham in question - from a homemade soup to hand-rolled pasta. You do have to be part of a tour for this trip though - minimum group size 20.

I quite fancy the idea of all this - how do I sort out a trip to Rovinj?

Well, this is where we leave you to organise your holiday - but to help you along, here are all the web addresses of the places we visited in case they interested you.

Hot Dinners were invited to stay in Croatia and were guests at many, but not all, of the restaurants and bars mentioned.