Getting to New York - The British Airways BA1 from City Airport 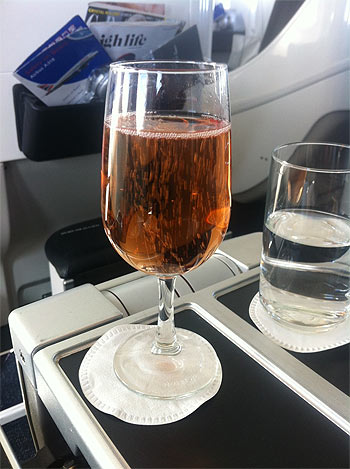 We flew to New York on British Airways London City Airport to JFK route. There are numerous things to recommend this service, not least the sheer handiness of leaving from City where you can check in just 20 minutes before your flight if you have baggage to check in and just 15 minutes without. You're also unlikely to be affected by any delays as the runway here is obviously going to be less busy than Heathrow.

But by far the biggest draw is flight BA001's short stop at Shannon airport in Ireland en route to New York where in around 20-30 minutes you clear US customs allowing you to enter JFK as a domestic flight and walk straight out when you get there with no queues. It's how we imagine people like the Beckhams of this world travel and we could definitely get used to it.

This is a business-only route, so the cabin has just 32 seats. We've never been on a private jet (cue the world's tiniest violin) but this was probably going to be the closest thing to it. In the short hop to Shannon there's just time for a glass of champagne and a starter - we had the cured meats and cheese platter. But once you're up in the air proper on the way to America you get the full British Airways business class treatment with a menu created by London's Roast restaurant. We had roast salmon with beurre noisette and then a really good rhubarb cheesecake. There's a short, but interesting wine list from which we try the Reata Chardonnay from Carneros in Napa Valley.

Two things mark this cabin out as different from BA's usual business class - here all seats face forward in rows of four - and entertainment comes courtesy of an iPad loaded with all the usual movies and TV shows you could wish for. It's a very, very nice way to travel.

On our return flight we took the appealingly named Champagne Supper Shuttle back to City. You can dine on board, but we decided to give their pre-flight option at Terminal 7 of JFK a try instead. There's an extensive buffet on offer here - plenty of attractive salads, and a 'celebrity chef' option of Thai dishes. We end up having a really good cider-braised chicken with mushrooms.

In the bar area of the British Airways lounge, there's a really interesting selection of American wines to accompany them (would be nice to see more of these served on board) - and if we wanted it, there's a cheeseboard to finish.

Barely seven hours later, we wake up in the air having swapped the skyscrapers of New York for those of Canary Wharf. It's a quick breakfast of warm croissants and fruit salad - and a much needed great cup of tea - before we land.

Frankly, the whole experience has ruined normal airline travel for us. It's going to be hard trying any other way of flying to New York after this.

Ticket info: Flights from London City to JFK start at around £1500 return (we checked for August 2013). For more information on that route go to the  British Airwarys website.