Cheeky overnight: we check into Claridges 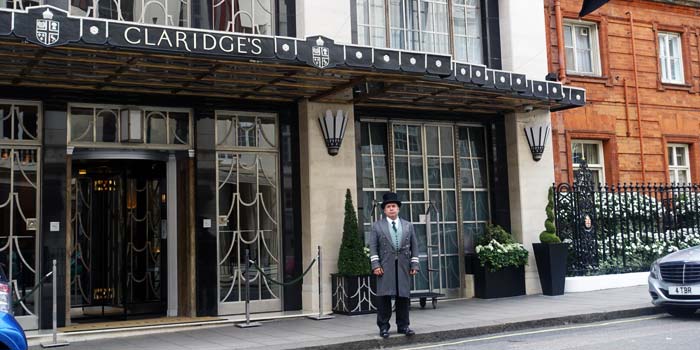 One of London's grande dame hotels, Claridge's, holds a special place in Hot Dinners' heart. Here is where we blew our salaries at the turn of the millennium when the art deco bar launched here following a makeover by designer David Collins. It's where we had dinner at the next table to Catherine Zeta Jones and Michael Douglas when Gordon Ramsay was in the kitchen. We'd been to press conferences upstairs with the likes of Ewan McGregor in a previous job. And we loved our meal here when Simon Rogan took over the restaurant and launched Fera.

But until now, we'd never stayed over. It was time to rectify that.

A little bit of history first. The hotel in its current form dates back to 1856 - there's a reason the corridors and sweeping staircase are so wide; it's to allow two women in crinolines to walk side by side. The much-beloved art deco interiors were done in 1929 when the ballroom was added and Diane Von Furstenburg gets involved in the 1970s (she's still working with them decades later) with various room interiors. It's beloved of royalty and celebrities alike, and now we were getting to try it out.

Checking into the room

We had a pleasant surprise on arrival. "We've upgraded you to a suite - we think you'll be pleased."

Turns out we'd been put in a Terrace Suite for the night - an epic series of rooms - lounge, bedroom, not one but two entrances and a massive terrace overlooking Brook Street. There are six of these in the hotel and, if you have the budget (or can get work to pay for them), they're one of the finest ways to enjoy London.

They come complete with a butler service, there's Laurent Perrier on ice, a lemon and poppyseed cake on the coffee table, lanterns and blankets for enjoying cool evenings on the balcony and a mini bar stuffed with Krug (darling). Hell, there are even Burberry raincoats hanging up in the wardrobes for if you fancy a walk and the weather isn't playing ball.

We'd arrived without having lunch, so to ward off any hunger pangs before dinner we called down for a plate of canapes to go with our fizz. For £24 we got a selection of Goat’s curd & pea barquette with lemon verbena; cornets of tuna, avocado and wasabi; confit duck rolls with spiced plum jam and some tempura prawns, chilli, carrot and soy. Pretty as a picture and lasted mere minutes. 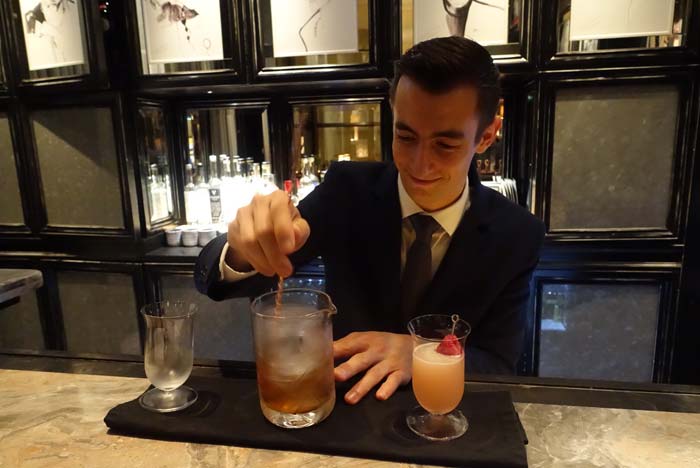 Originally a cigar bar - hence the name - the Fumoir is tucked away from the crowds, hidden behind an unmarked door off the foyer. Here is where to come if you want a quiet, but lethal, cocktail pre-dinner.

Having tried the Bitter Corpse Reviver and one of their daiquiris created for World Daiquiri Day - The Sun Also Rises - we also made time before dinner to stop in at the restaurant bar too. There are only a few stools, but it's well worth it and preferable - we think - to a cocktail at the table. There, we tried some of their cocktails which have the same seasonal approach to the food menu - the best being a blend of Pershore cox apples, anise hyssop and raspberry vodka. 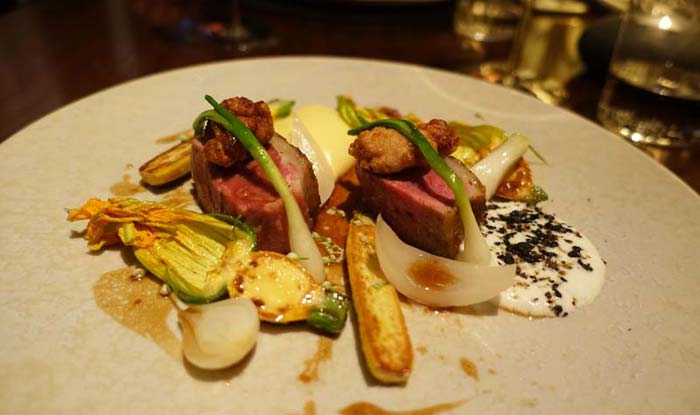 We originally visited Fera just over a year ago, when the restaurant had only barely opened its doors. It's all too rare that we revisit restaurants, given how many openings we try and cover, but this was a great opportunity to see how things have progressed since it won its first Michelin star in last year's guide.

One thing's for sure from our visit, Fera is a London restaurant at the very top of its game. Service was on point, the food was some of the best we've eaten this year and we'd be very surprised if it doesn't get a second star from Michelin next year.

Having opted for the tasting menu last time, we went a la carte for our dinner here. Particular highlights were:

Check out the full run-down of our menu in the gallery below. To precis - if you haven't been to Fera yet, then you should go. Now. And if you have been before - from our experience it is well worth a return visit, although you may want to wait until the London version of Aulis, L'Enclume's development kitchen, opens - which is imminent.

We were still up for a good time after dinner at Fera, so after a happy half an hour sat up on the landing, people-watching and feeling a bit like children eavesdropping on an grown-ups party, we repaired to the Claridge's Bar for one last cocktail. We hadn't been here in a while but an incredibly good vodka Martini was about the best we'd had in London all year. This place still has the magic.

And up for a proper breakfast 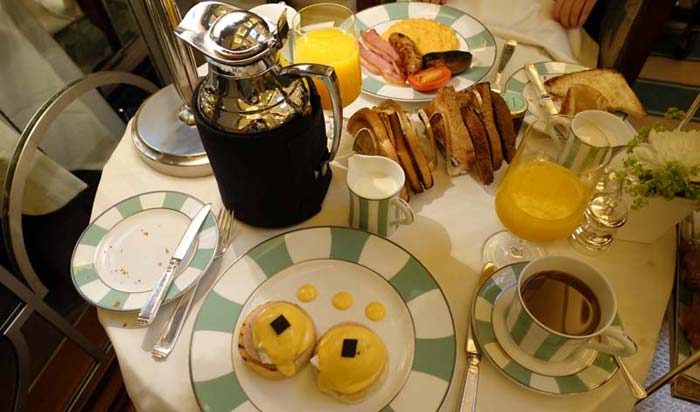 The Claridge's breakfast is held in the same room as as their afternoon tea and it's almost as huge a spread. Things kick off nicely when you're shown to your table where there's a huge trolley laden with pastries and jams alongside (see the pic below) and a breakfast table simply crammed with goodies. Scrambled eggs were perfect (they ARE hard to get just right) and the eggs benedict topped off with a slice of truffle were particularly fine too.

If you prefer you can order all the pastries and have a Full English or European (which comes with cured meats) for £34, a Continental for £28 and even a Japanese breakfast for £40. Pretty much every breakfast need is catered for. If you're staying over you could have all this in the room - but we'd say if you're only here for the night, you're better off dragging yourselves out of bed to enjoy this experience downstairs.

What's in the area? 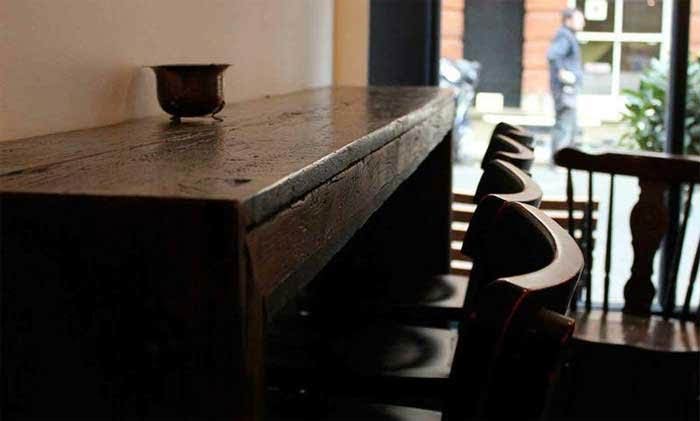 Set in the heart of Mayfair, Claridge's has - as you'd expect - all manner of swanky food and drink places nearby if you're staying for longer. La Petite Maison is just around the corner for an expense account lunch, The Running Horse pub is close by if you fancy a decent British pint (and the cocktails upstairs are tip top too). The nearest coffee house, which also serves Postcard Teas, is Taylor St Barristas on Brooks Mews. There's a Hedonism Wines round the corner in Davies Street too.

It's been many years since Spencer Tracy declared that when he died he'd rather go to Claridge's than heaven - but we could echo that sentiment today. There's something so deeply glamorous about Claridge's from the moment you step into that magnificent Thierry Despont Foyer - a sense of enchantment that continues whether you're leafing through beautiful coffee table books in the Map Room or sipping an icy Martini in the wee small hours of the morning in the bar. It's always been a favoured London haunt of ours, and staying over here allowed us to hold on to that magic just a little while longer.

Our Terrace suite would set you back upwards of £2820 but for £540 you could have a Superior Queen Room with a bottle of champagne, late checkout and a shopping discount card. (Based on a Saturday night in October 2015).

Find out how to book your own cheeky overnight at Claridge's.