[SIGPLUS_EXCEPTION_SOURCE] Image source is expected to be a full URL or a path relative to the image base folder specified in the back-end but /blog/2013/limewood/gallery is neither a URL nor a relative path to an existing file or folder.
0
Shares

Angela Hartnett in the New Forest - we check out Hartnett, Holder & Co at Limewood 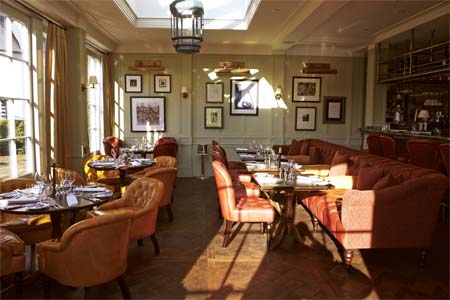 What can you tell us about Limewood?

Right in the middle of the New Forest, Limewood is a relatively new hotel - only about 5 years old. While it's on the grounds of an old school, little of the original building remains. However, you'd be forgiven for thinking Limewood was there for decades - it crosses the ground between new and old remarkable well, mixing everything you'd expect from a modern five star hotel with the look of a stately home - complete with flat cap wearing staff roaming the grounds. So far - all very Downton.

And how far from London is it?

It's just a couple of hours by train to Brockenhurst - and then less than 10 minutes by cab to the hotel. You can drive and have your car parked for you - but we always prefer the train.

What sorts of things does the hotel offer?

One thing that really sticks out is the very impressive spa.  There's a huge indoor pool, an outdoor hot tub, a separate hydrotherapy pool, sauna, steam room and plenty of treatment rooms. It's properly state of the art, so if you're after a bit of pampering, then this is the hotel for you.

Alternatively, as you're right in the middle of the New Forest, there's loads of walking opportunities if you fancy stretching your legs. Much needed wellies are provided, so there's no need to pack them, along with suggested walks (with accompanying maps) ranging from 45 minutes to 4 hours.

Well, that was really why we had come to the hotel. In a much publicised move, Limewood is Angela Harnett's home away from London as she's recently joined up with Head Chef Luke Holder to launch Hartnett, Holder and Co as the signature hotel restaurant. As well as taking over the main restaurant space, they've taken over the bar area too - offering a day-long grazing menu.

That menu was our first taste - trying out the aged beef burger and chips the muinute we set foot in the hotel. Alas it wasn't the best of starts as the burger although ordered medium (as "recommended by the chef") it was served a very definitive well done. A shame, as it was well seasoned and served with some excellent chips. If they're so keen to recommend you order medium, the kitchen needs to match this and serve it that way too.

Much better was the selection of cured and smoked meats that we ordered later on (sustenance much needed after a walk and swim).  A platter of coppa, salami and hot chorizo was fantastic. Limewood has its own smokehouse which you can take a tour around if you ask (see the pics in the gallery) and it was certainly delivering meat of high quality (although that platter was priced pretty punchily at £22 for two). Although if you do go into the smokehouse - be prepared to be smelling it for several days after...

And what about the main restaurant itself?

Of course, the restaurant is the main event and it's what many have come to Limewood to try out (it was packed for Sunday lunch when we arrived). As well as a major overhaul of the menu, there has also been a huge redesign of the dining room itself. Before it was described as a minimal affair - quite formal and, if we're being honest, what many expect from a country house restaurant. But now it's nothing like that - resembling something that would feel very at home slap bang in the middle of Mayfair. It has a very clubby feel with a large central bar (if you fancy counter dining) and low slung chairs throughout, with a very warm colour scheme. Designed by Martin Brudniski who's worked on many of the Caprice Holdings restaurants - it's a textbook example of how to bring a buzzy city feel to a country hotel dining room and as such was a highly welcome breath of fresh air.

The central bar is, we think, the place to start (as we did) particularly if there's only two of you. They have a slightly different cocktail list from the main hotel bar and a specific focus on sherries (including our fave Pedro Ximenez - which was a little too sticky to start a meal). At the bar you can also order a selection of nibbles to kick things off. We had venison tartare, rosemary goat's cheese with beetroot, and some coarse chicken liver pate. All great - with the tartare particularly standing out. We also tried some squid ink chicken hearts - mainly because we didn't want to chicken out (pun intended) when offered them. And an attempt by a passing waiter to do just that (softly saying 'badoom...badoom' as we tried them) didn't stop us. However we probably wouldn't try them again. The rest was great though and a fun way to start a meal there.

Once you've left the bar - we'd recommend trying to get a table in the same room - there just seemed to be a greater buzz there. The other part of the dining room is fine - but they'd seated just couples there, so it was a little more hushed.

And the main event?

As for the main meal - it was well worth the trip down to the New Forest by itself. It's quite a traditional a la carte menu (see the gallery) but with enough promising sounding dishes to make return trips to try, if you find yourself in the area again.

We both started with homemade pasta - a ravioli with soft polenta, dorset truffle and artichoke and a double agnolotti with guinea fowl and burrata were both surprisingly light pasta - with the former in a delicate creamy sauce. Not exactly fireworks - just both very, very good pasta dishes - and not too big to spoil the main course.

Of the mains, our favourite was slow cooked pig cheek with celeriac and leek served in a rich sticky sauce. Although a close second was the red mullet with cock crab and cannelloni beans which looked quite spectacular. Also worth highlighting are the deep fried courgettes - arguably the best deep fried side we've had since Cut's onion rings (and we LOVED those).

Dessert also had a showstopper - the vanilla tart with rum prunes. It was perfectly cooked with the thinnest pastry and a perfect wobble - quite the best tart we've had since Marcus Wareing's signature custard tart at the Savoy Grill - so that's not faint praise. The caramelised apple torta was also good, mind, particularly with the frankly huge vat of cream that's served on the side.

Anything else to highlight?

If you're in a large crowd, it might be worth going for the "il tavolo della cucina" family style menu which leaves the chef to choose the dishes for the kitchen (55 per person). Alternatively, you can choose to have a tasting menu in the kitchen - at the Kitchen Table. The photos on the Limewood website don't do this one justice - you really are right in the thick of it in the kitchen - if there are any chef arguments, you'll be the first to witness them as there's really nowhere to hide. It'd be a fun - but full-on - experience, we think.

It's also worth mentioning the bar in the spa - Raw & Cured - which serves a lot of raw food, juices and cured meats, and wines and champagnes - but we didn't get around to trying this.

Alongside the renovation of the restaurant Limewood has moved the main hotel bar to a central position into the middle of the hotel, under a glass roof which retracts in the summer. It's quite a spectacular room, and should be particularly good on a summer's evening with drinks under the stars. Cocktails were inventive and strong (although at 12, on the more expensive side). Wine's much more reasonable with some good glasses around the £6-£8 mark including a really good Planeta . It's also well worth trying the Limewood "Pail Ale" - best beer on the menu, we thought.

We loved the hotel - but let's be honest, five star luxury's always going to be rather nice. Our gorgeous room was a forest suite complete with separate lounge and proper open fire (with plenty of kindling) and costs £495 a night at the weekend. So it's pricey, but the surroundings and service live up to that price. If you're looking for a pampered night away from London with some top class food - then we'd definitely recommend.

Hartnett and Holder itself is excellent - a warm convivial dining room serving extremely accomplished food. If you're heading down to to the New Forest, then you owe it to yourself to pop in for a meal - Hartnett and Holder are doing very good things indeed down south.

Dinner and a room at Limewood was provided to Hot Dinners.