An all star chef popup with Michel Roux Jr at Limewood 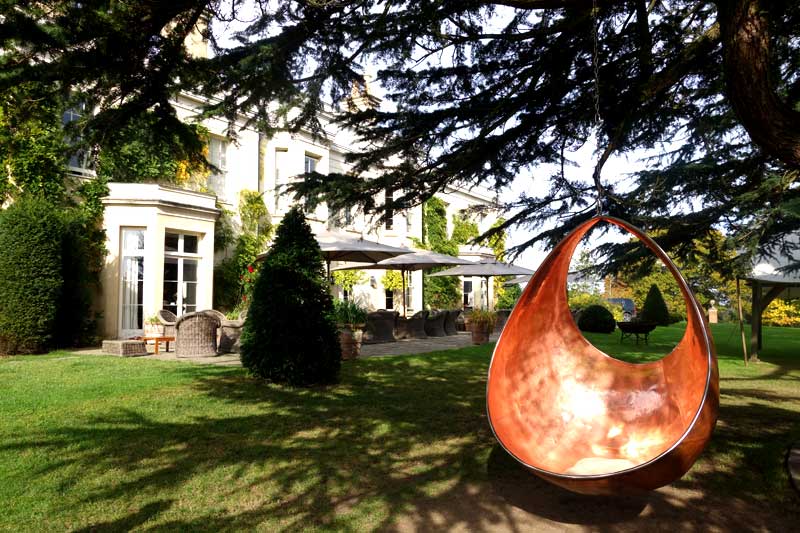 Set in the middle of the New Forest, the folk at Limewood have been hard at work building its reputation as a serious foodie hotel in the years since it opened. We visited pretty shortly after it first opened its doors, back in 2013, to try their Hartnett, Holder and Co restaurant run by Angela Hartnett and Luke Holder. Since then the hotel had opened a cookery school and launched a series of prestigious pop-ups with big name chefs. When we heard Michel Roux Jr was heading here with his daughter Emily, we thought it was time to pay a return visit.

Since then the hotel had opened a cookery school and launched a series of prestigious pop-ups with big name chefs. When we heard Michel Roux Jr was heading here with his daughter Emily, we thought it was time to pay a return visit.

A room in the woods 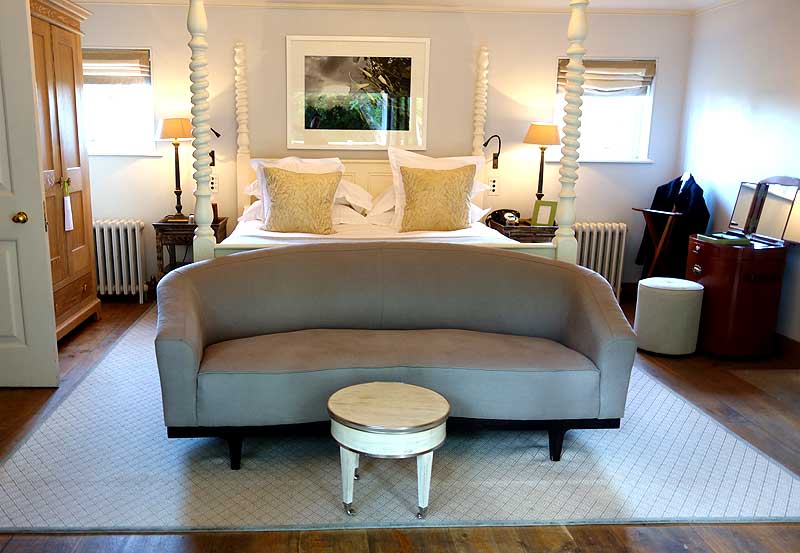 The main bedroom at Crescent Lodge

Our suite, Crescent Lodge, was just palatial. Set in the grounds just a minute's walk from the main house, the two-floored space featured a ground floor lounge and single room with en-suite. A stone spiral staircase then led up to the master bedroom with a humungous bathroom, balcony looking out over the forest and - best touch this, working fireplaces on both floors.

From the Bamford toiletries in the bathroom to the bottle of award-winning English sparkling wine from nearby Hampshire vineyard Hambledon every detail had been given great consideration. Even the mini pantry was a winner, sporting everything from top-end champagne to Wotsits. 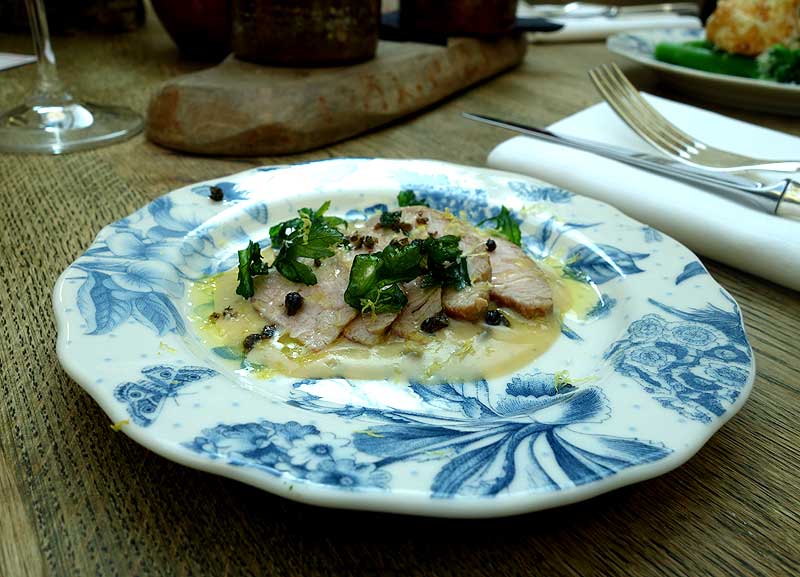 Given the dinner that awaited us, we decided to have just a small lunch in the bar trying a pitch perfect vitello tonnato cicchetti (£5) and a small piadina of sprouting broccoli topped with a breaded poached egg from the restaurant's new menu Trattoria Piattini.

What's there to do between lunch and dinner? 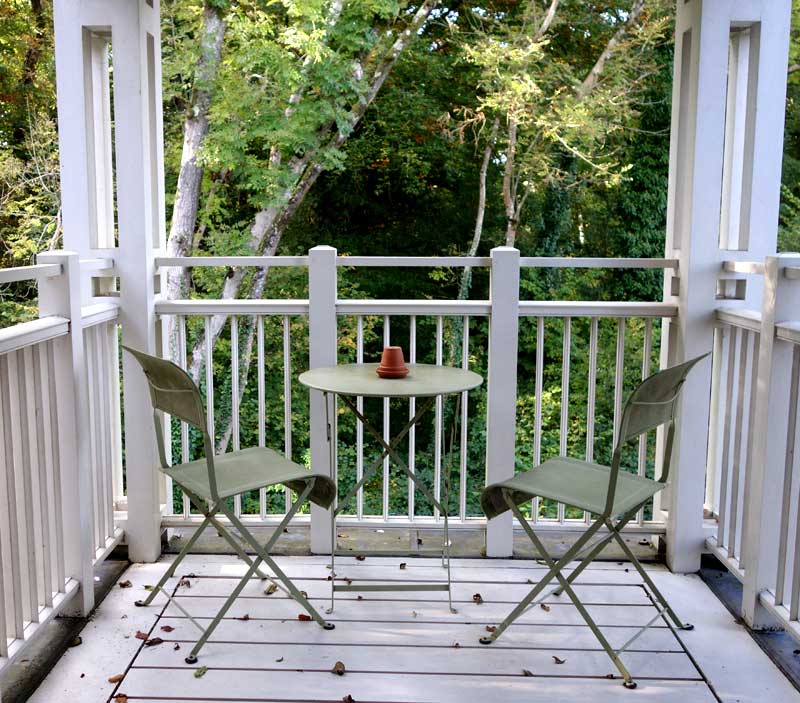 Our balcony overlooking the woodland walk

We lucked in by visiting on a balmy October weekend so headed straight for the spa with its indoor pool and outdoor hot tub. But as long as it's dry you could do a lot worse than pulling on one of the hotel-supplied wellies and heading out into the forest for a bracing, calorie-burning walk.

So what exactly are these guest chef pop-ups? 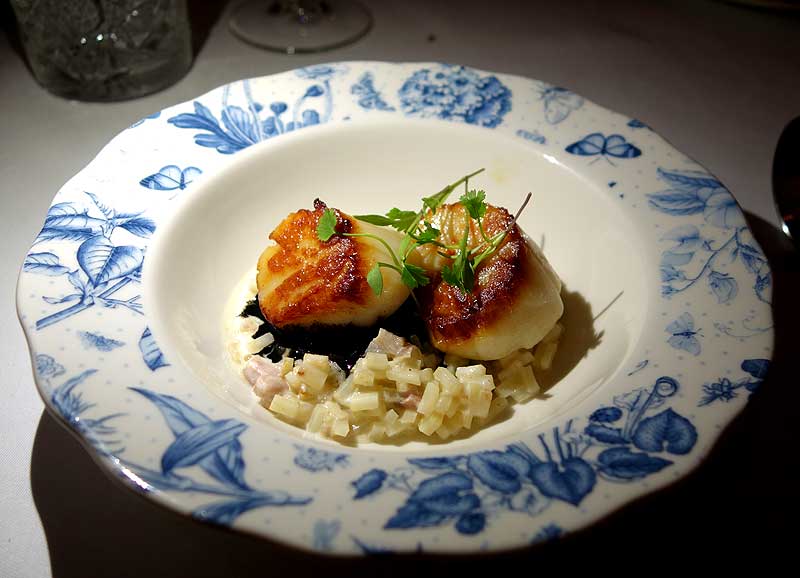 They're an opportunity for chefs to come down and cook with the hotel's chefs and do something a little different to what they'd turn out in their own kitchens. The following day they usually offer lessons in the cookery school. For Michel Roux Jr and his daughter Emily, it was a chance to mix things up from the usual fare at Le Gavroche. On the night we went they were cooking alongside Angela Hartnett, splitting the courses between them.

Dinner kicked off with a platter of snacks served family-style at mostly group tables (although some smaller tables were available) - consisting of salumi cured at Limewood, mini Roquefort shortbreads and palmiers and a bowl of amazing smoked cods roe.

Emily was responsible for the starter - a really inventive plate of seared scallops on top of a bed of celeriac risotto - that's risotto made from, not flavoured with, celeriac. Her dad turned out an exemplary plate of loin of venison with a venison faggot, chestnut puree and pomme dauphine and it was back to Emily for a very modern dessert of gateau de savoie with avocado mousse and pineapple. 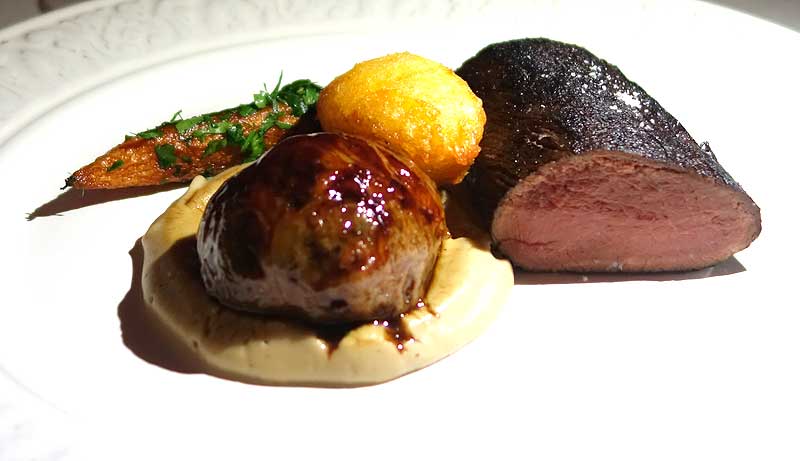 Communal dining isn't for everyone, but we lucked in with an excellent table, with a mixture of Hampshire locals out for dinner and London foodies down for the weekend. And after some book signing from Michel and Angela and a quick snifter in the bar afterwards it was time to retire. 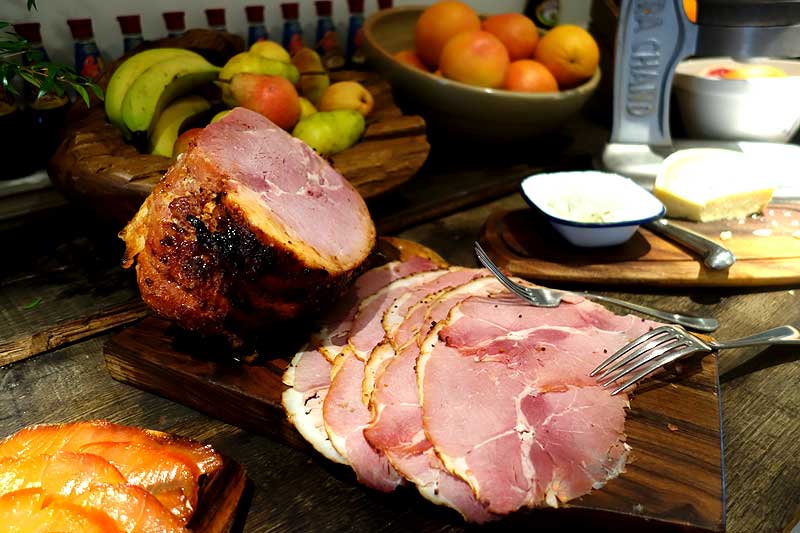 The best breakfast buffet EVER

Breakfast the next morning - after a wander round the grounds to build up our stamina - was an impressive affair. On the buffet was a massive cooked ham, home-cured smoked salmon and no less than three types of eggs for boiling - hens, duck and quail, since you ask. And from the cooked breakfasts - in addition to a great full English, we also had a great plate of steak and eggs. .

And from the cooked breakfasts - in addition to a great full English, we also had a great plate of steak and eggs. .

Limewood is a real foodie treat - mixing the luxury hotel experience with serious attention to its food offering. And it's a beautiful part of the world, so if you're heading down here from London you'll find it a real tonic. We'd have loved there to be a shop selling some of the great smoked meat and fish they serve here to take home with us, but that's our one niggle. All in all a great break.

Even if you want to just do an overnight stay Limewood is eminently doable as its barely a 90-minute journey out of London. We took the train to Southampton Airport and hired a car, but you can take the train all the way to Brockenhurst where it's a 5-mile taxi ride to the hotel.

A midweek Forest Foodie Getaway at Limewood costs £405 for 2 with a three-course dinner and breakfast. A weekend in our lodge cost from £1900.

The next guest chef pop-up at Harnett Holder & Co is Mark Hix on Friday 11 November 2016. A few tickets are remaining - visit the site to book. There are also two-night breaks available which include seats at the dinner.

And keep an eye on this page or follow them on Twitter @limewoodhotel for info about more pop-ups.