We went over to Madrid to take in the pop-up of Chicago's Alinea - and proceeded to cover as much of the city as we could in a couple of nights. If you want to follow in our footsteps, here's where we went... 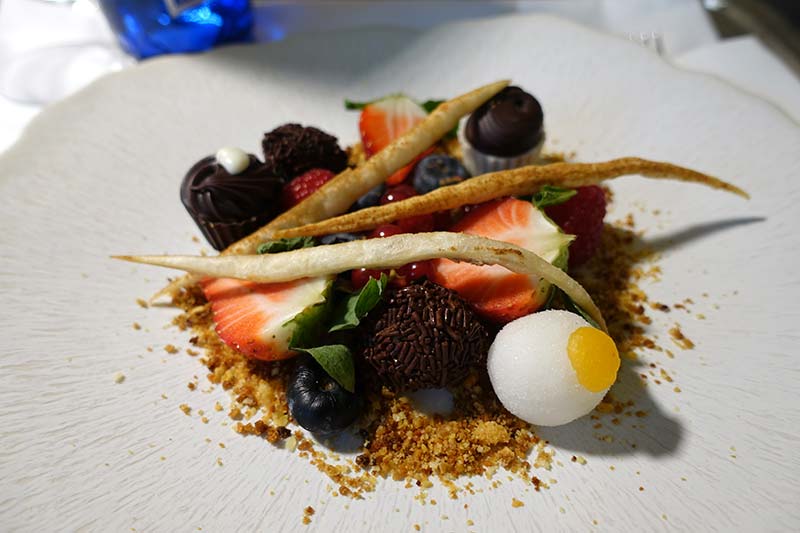 When we'd been looking at the map before coming to Madrid we were a little concerned that our hotel seemed a bit out of the centre. That turned out to be nothing to worry about - not only was it a lovely 15 minute stroll into the centre, which when you're eating as much as us, can only be a good thing. But it also turned out to be a few minutes stroll away from Madrid's top tapas street, Calle de Ponzano. The bedrooms were a very decent size and the breakfast was really good - everything from fresh smoothies to jamon and cheese toasties (and a hair of the dog glass of Cava) was included.

A superior room for a weekend at the end of February is about £250. 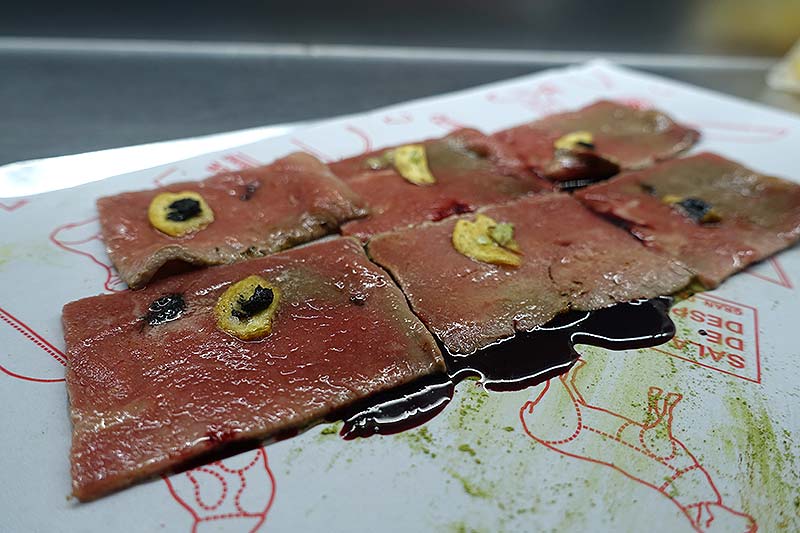 This was where we had our first meal of the trip. It came as a recommendation from Instagrammer Clerkenwell Boy and was completely heaving when we hit it late Friday afternoon, packed with folk clearly starting their weekend early. Find yourself a seat, if you can, and then don't be embarassed to ask for the English menu. That'll feature the extensive list of the day's specials - clearly they get a lot of British foodies heading here. The food here is memorably good - expect really inventive tapas. Everything we had was amazing, but standouts were beef tenderloin in cereal molasses and beetroot sauce with garlic which was blowtorched in front of us, and baby squid with coriander oil and alioli.

We also popped into Ponzano on the same road for a beer and tapas later in the weekend, which was some insanely nice potato salady thing that we would have plunged our heads into if we could. SO good. 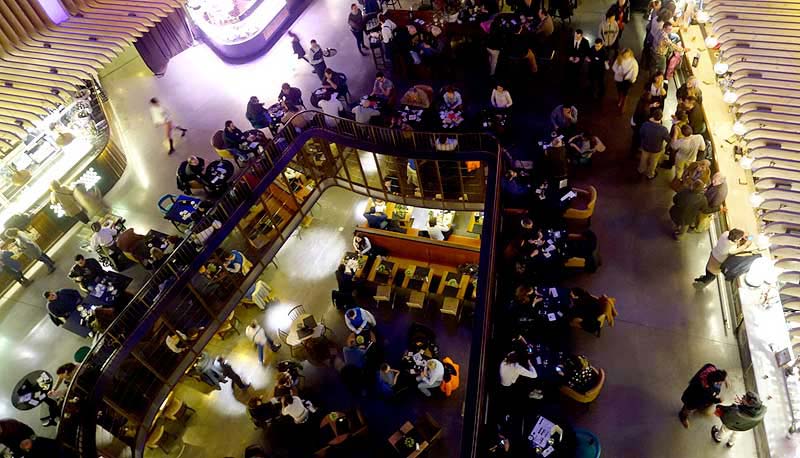 A look downwards into Platea

Friday night was spent market hopping. Imagine Borough or Maltby fused with Street Feast and you'll have an idea of Madrid's market scene. Although you can buy food to take away from all these markets, they're much of a place to browse and eat. This is where travelling in a group comes in handy - get some drinks and have someone bag a table while the rest of you go trawling for food to bring back.

Platea is an extremely impressive set-up. It has taken over a huge old theatre and the stage is still used for putting on cabaret shows while you eat - while every other space is taken up with food. There's a cocktail bar at the top with a cracking view over the whole thing (with great - but slightly bizarre looking cocktails) and something to eat on every floor, including where the orchestra pit used to be. The snow crab counter looked amazing as did the croquetas section - we dined on pinxtos and more small bites while roaming the place.

Mercado de San Ildefonso was next - this had a younger crowd and more of a clubbing feel. Verdejo was a steal at just 5 euros for two glasses and we loved our steak tartare with foie gras and truffles from the Bovinus Luxury stall.

We ended the night at Mercado San Anton where there are several floors of stalls and - crucially - a rooftop bar. Just be aware you can't take food up to the bar (we fell foul of this rule and had to have our dulce de leche cheesecake set aside for us while we finished our drinks). 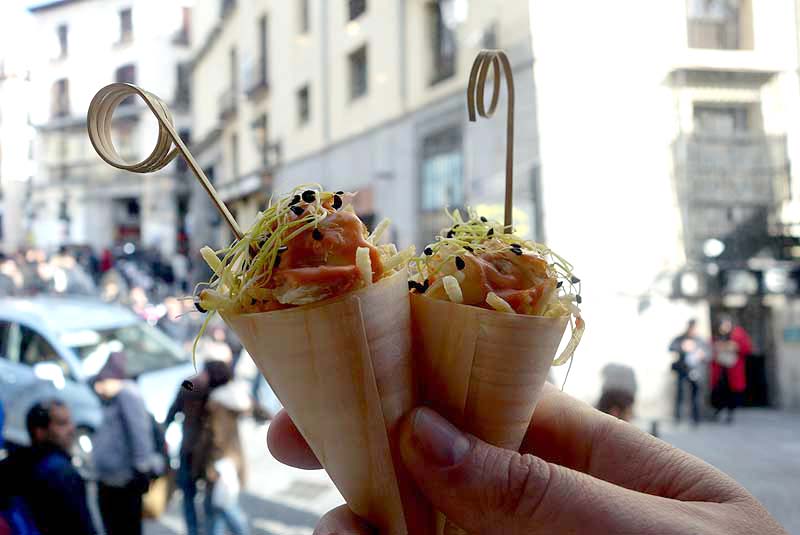 This beautifully restored market is handily placed if you've been to visit the palace. We popped in for some croquetas and mini cornets of fresh crab and 'chips' as well as mini sliders of Galician beefburgers. If we'd been thinking straight we'd have spent more time here. There were loads of amazing wine, sangria and vermouth stalls too. But it does get seriously busy.

There are two branches of this department store to have on your radar. The branch on Calle Serrano has Street XO at the top (long queues and no booking, so we didn't make it this time) and the branch at Plaza Callao has a huge top floor food court with amazing views over the city and a large outside terrace where we had tapas and a rather fine calamari bocadillo. There are also some lovely food and drink things here to buy and take home. 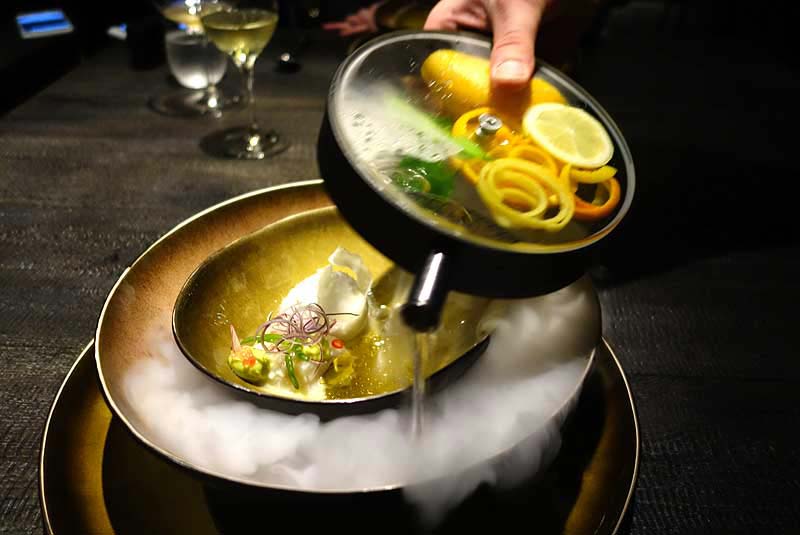 Our dinner at Alinea was the lynchpin of our trip. We'd already interviewed Chef Grant Achatz so had an idea of what to expect. He'd moved here for five weeks with the team from his impossible-to-get into Chicago restaurant and built a restaurant from scratch in the basement of the NH Hotel Eurobuildings, up in the business sector of the city. The hotel already has one hell of a reputation for its food - this is where DiverXo, Madrid's only three Michelin star restaurant is, and there's also DOMO by Paco Roncero and the 99 sushi bar.

From the word go, the key is to enjoy yourself - guests were invited to pick a clear envelope with a lump of sugar which was then added to a glass of Champagne. This infused the wine with an essence of celery, odd but very good. After this - a jelly cube that tasted for all the world like a Chicago hotdog.

Following this were 12 courses which, quite frankly, blew us away. We hadn't had a culinary 'experience' - and make no mistakes, this is an experience, not merely dinner - since we first ate at The Fat Duck years ago. At every turn our senses were confounded, confuddled and thrilled by what we ate. There was an iceberg the size of our head, featuring a hot stone to cook a snapper on whilst also containing a lemongrass infusion inside the ice that you sucked out through a steel tube.

A bowl of charcoal, which we foolishly thought was there to warm us and add some theatre, turned out to have been cooking a hidden portion of sweet potato and Wagyu beef. We ate edible helium balloons and a black truffle raviolo that we we warned to eat with our mouths shut as it would (and did) 'explode'.

A shard of something hanging on a hook over the table turned out to be the final flourish in the Alinea signature dessert which is painted on a silicon tablecloth covering the entire table. It was mad, crazy and - above all - extremely entertaining.

If we had any reservations it would have been the speed of the meal. For something this theatrical and overblown, you'd expect to spend hours at the table, but we were in and out in just over two hours. So this was an intense culinary experience, over all too soon. We may just have to fork out for tickets to Chicago to try the new look restaurant when it reopens. 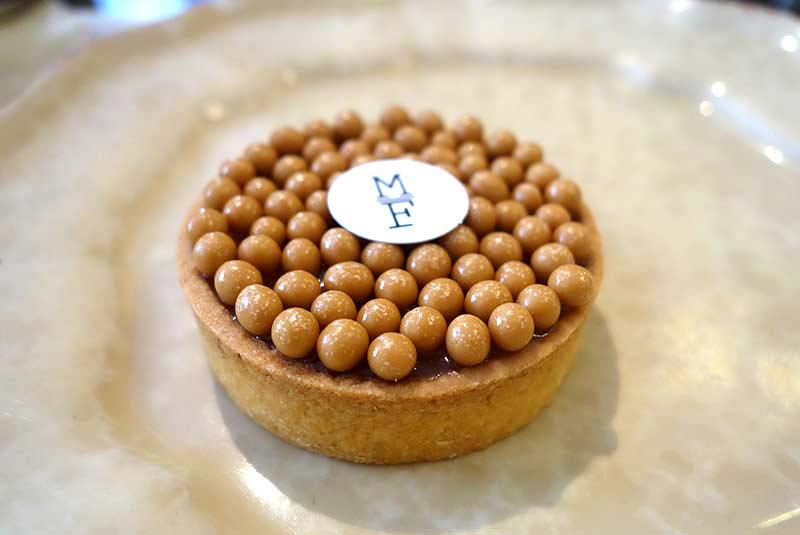 Breakfast - and our last meal of the trip before we headed back to the airport - was at Mama Framboise. There are two branches, one in Platea and the one we tried, on Calle Fernando VI. With large farmhouse-style tables, it's a buzzy place to catch breakfast on a Sunday and the patisserie section courtesy of the multi award-winning chef Alejandro Montes is very strong. Two of the pastries we tried - caramello and carrot - were incredibly elaborate (and delicious). If you aren't after something so sweet, opt for their pan con tomate.

If you're heading here via Gatwick don't forget to check out Bruno Loubet's new Grain Store restaurant there.

The first thing we did on arrival in Madrid was pick up a Zone A 3 day travel pass. This works on anywhere you're going to want to go on the Metro system and it included travel to and from the airport. At just under 18 euros, buying this proved to be a wise decision.

Hot Dinners were invited to Madrid as guests of NH Hotels.