A foodie trip to Paris with Eurostar Interludes

“What we really wanted to do was link the two most foodie cities in the world together,” our PR explains to us as we zoom at 300km per hour under the strip of water separating England from France.

We’re on board to try Eurostar Interludes, a new bespoke holiday package that consists of a whirlwind foodie mini-break to Paris. In advance, we're told little about who the chefs will be and who will be cooking for us in the evening. But we have given lots of info about the kind of food we love, so Eurostar is going to be matching us with the chefs that are right for us. This is something that they'll be doing in the upcoming Interludes trips too - more of that later on....

On the train with Honey & Co and Mokonuts 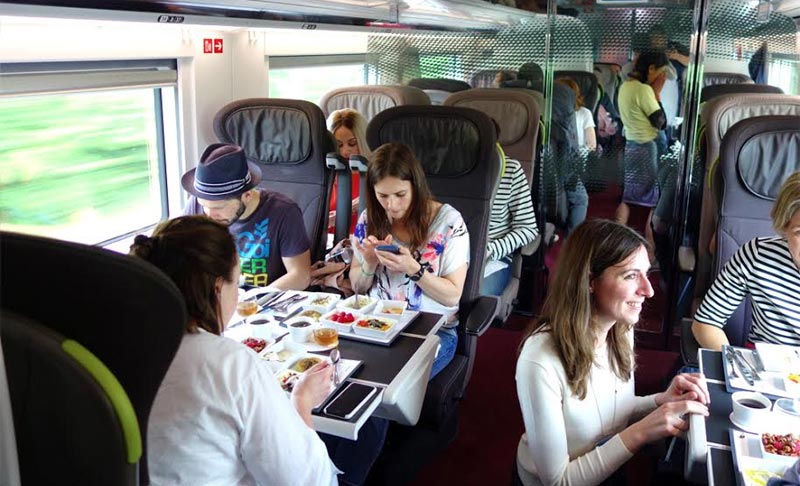 Taking over the cabin...

Arriving at St. Pancras International, we breeze celeb-like through security to the Premier Lounge where we settle in for a spot of pre-journey coffee. But not for long, as soon we’re called on board the train in Standard Premier class, ready to begin our 36-hour food and drink odyssey to Paris.

It’s been some time, we admit, since we last went on the Eurostar, but little has changed - it’s still efficient and comfortable, moving us along at great speed as we zip through the Kentish countryside.

One thing that most definitely IS different for Interludes though is the new brunch platter we’re treated to. After we take our seats in the Standard Premier coach, we’re introduced to our chefs - Honey & Co’s Sarit Packer and Itamar Srulovich, plus Omar Koreitem and Moko Hirayama of Parisian bakery and cafe Mokonuts. They're on board to cook up a special Middle Eastern-themed brunch, created for the journey. 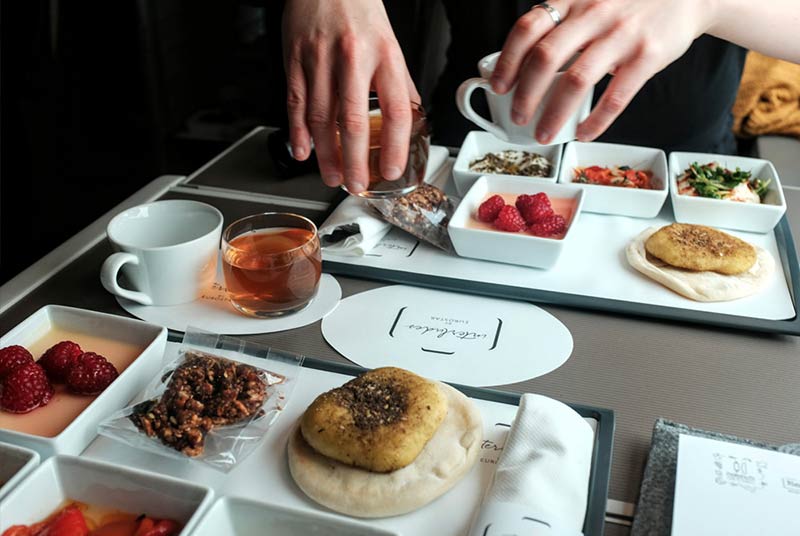 Many will already be familiar with Honey & Co. They've earned well-deserved praise from the likes of Jay Rayner and AA Gill for their simple but dedicated approach to Middle Eastern food, and have been keeping busy recently with the opening of newest project Honey & Smoke. They most definitely know what they’re doing, and it shows, as together with Mokonuts, they churn out mezze, bread and warm savoury cheesecakes from an onboard kitchen.

First, we sip dainty cups of intensely floral orange blossom tea, poured tableside, then are presented with our spread. There are marinated peppers, broad bean hummus and that creamy yoghurt-like dip labneh given an aromatic lift with a scattering of zatar, alongside pillowy-soft pita bread and manouche. Your standard train food this is not. 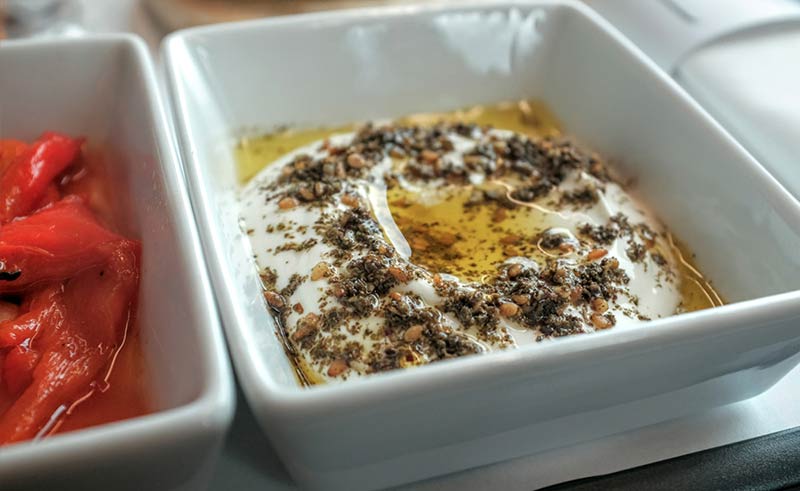 A sugar pannacotta with rose-scented raspberries is beautiful to look at, and goes down a storm with some of Honey & Co’s famous Ashura cereal - it is still brunch, after all. The French countryside, dotted with farm houses and crop-textured fields, whizzes past us as we finish up with Turkish coffee. 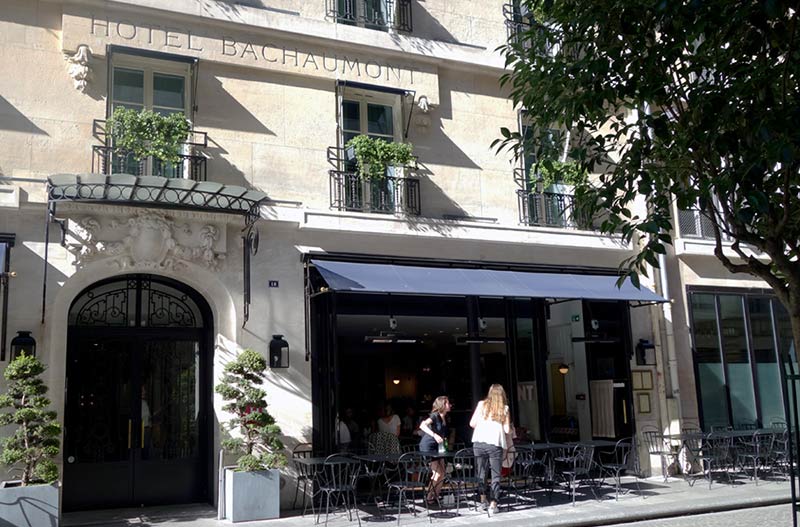 Our hotel is the stylish 4* Hotel Bachaumont, in the Upper Marais area of the 2nd arrondissement. It’s tucked away off a busy street full of charming foodie delights - eclair ateliers, creme de glace, and upmarket fruit and veg shops with pallets weighed down by asparagus and avocado.

Inside the hotel, it’s refreshingly cool. There's a moodily lit bar The Night Flight, and an airy, glass-roofed restaurant and lounge with walls that retract onto the sunlit street. Decor is luxe, with marble floors and plenty of attention to detail, from the vintage tiling to the embroidered headboard. Our room is compact, but given the central location, it's hardly a surprise.

It's a sweltering 28 degrees outside, so we collapse to take a breather, before heading back out to explore the city.

The evening meal with Florent Ciccoli

After a quick sightseeing jaunt and a visit to take in the works of Giacometti (both the Metro and the gallery tickets are provided by Eurostar), we finish up with a much-needed rapid Aperol spritz and head east to the home of chef Florent Ciccoli for our evening meal. 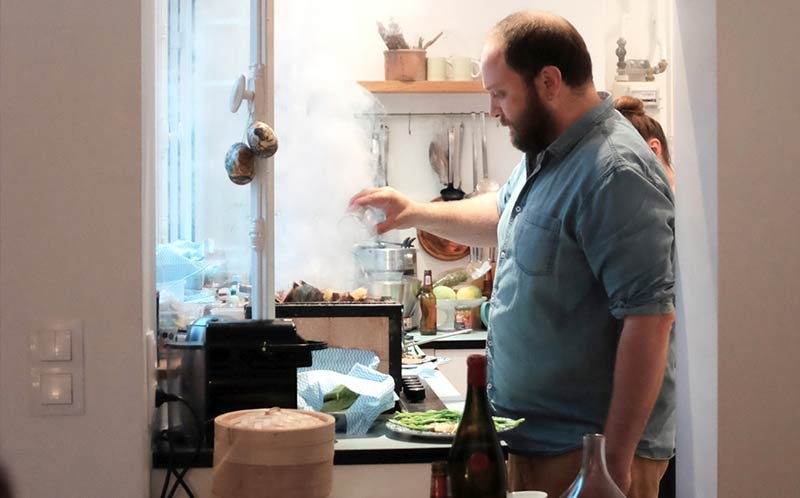 Florent is getting things ready...

Through the courtyard, past the children playing badminton and up the stairs, we find the chef’s little Parisian home, complete with a compact kitchen he barely leaves over the next six hours. Florent Ciccoli is the man behind Les Bars Populaires, which owns several restaurants in the city, including Au Passage. He is joined in the kitchen by his upstairs neighbour Maori Murota, who introduces an Asian-fusion element to the menu, thanks to her Japanese heritage.

Florent is one of 11 potential supper club hosts that Interludes guests can expect to be ‘matched’ with, depending on their taste in food and dietary restrictions. Some of the others include Bertrand Grébaut (Septime), Sven Chartier (Saturne) and Taku Sekine (Dersou). You won’t know until you’re on the train though - that’s all part of the surprise. And on the meals, they make sure to add some locals too - aiming to give you a real flavour of Paris. 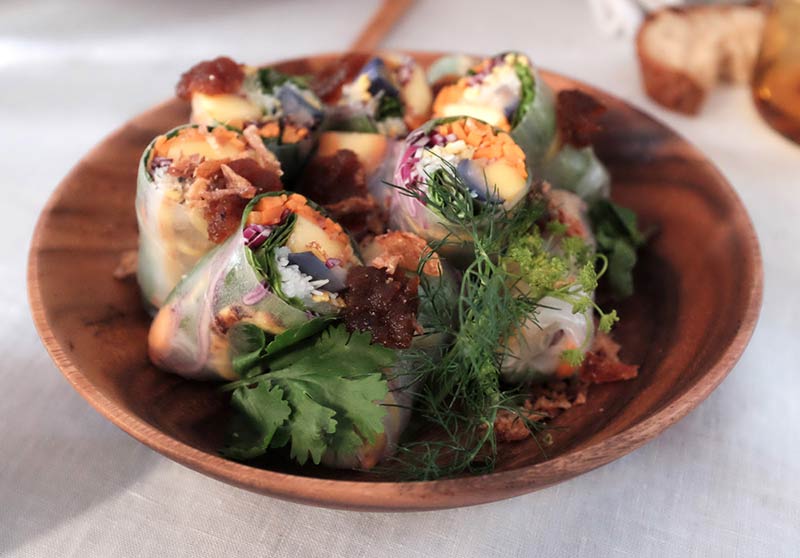 Back on Rue de Crimée, introductions are made, and we’re handed a glass of something fizzy. Al Green’s greatest hits begin to play, and we slowly begin to work our way through the evening’s menu.

Setting the tone for the evening to come, we begin with slices of saucisson sech from Corsica, where Florent hails from. There are anchovies from the Basque country which we gobble down with sourdough, and cubes of oily focaccia studded with green olives and Sicilian oregano. 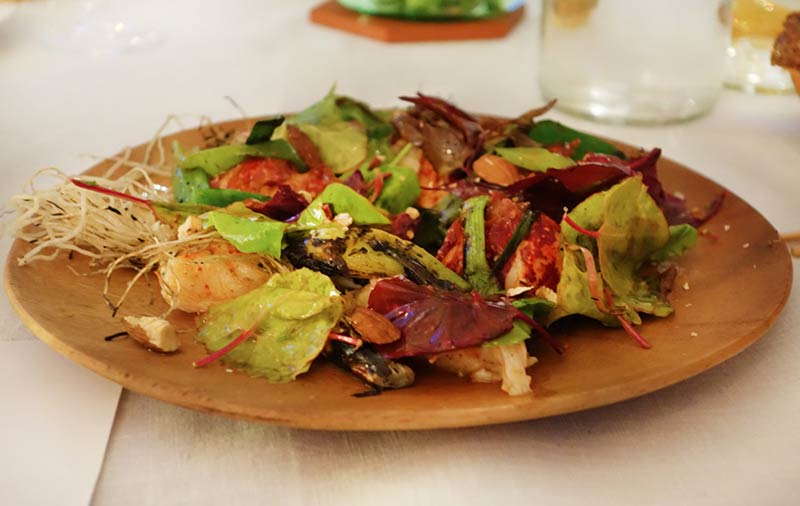 Next, a dish of summer rolls, courtesy of Maori, are as refreshing as they are beautiful, with slivers of mango, carrot and aubergine glowing through their translucent rice paper wrappers.

As things start to heat up, so too does our kitchen which fills with smoke when an improvised windowsill barbecue goes slightly wrong and the lobster catches fire, forcing us to take temporary refuge on the balcony.

The shellfish doesn’t suffer for it though, and arrives drizzled with vanilla butter and finger-sized chunks of charred spring onion, roots on, washed down with a glass of orange wine. It is sensational. 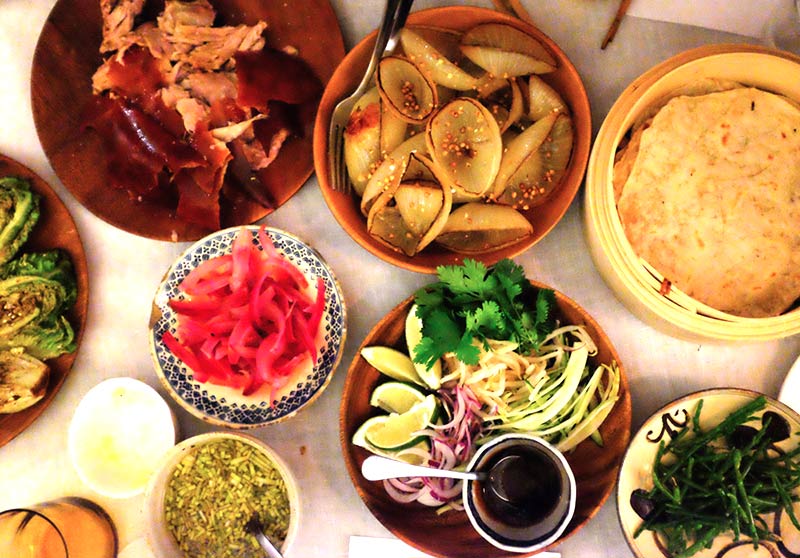 Finally, it's time for the piece de resistance, which we’ve been eyeing up hungrily from its resting place on the balcony: an entire suckling pig. When the moment of truth arrives, the pig is served up crispy duck style - little bowls of tangy hoi sin, Chinese-style crepes, sucrine and thick rounds of onions grilled to a wonderful sweetness.

With two courses still to go, we’re buoyed on with a glass of fearsome Corsican red for the cheese course. Finally, the barbecue blowtorch returns to caramelise the apricots that adorn the hazelnut and almond tart. It’s served with shiso, which gives it a tangy twist.

A marathon six hours after we arrived, the meal has finished, we are fit to bursting, and just about manage to roll down the stairs, and into a taxi. 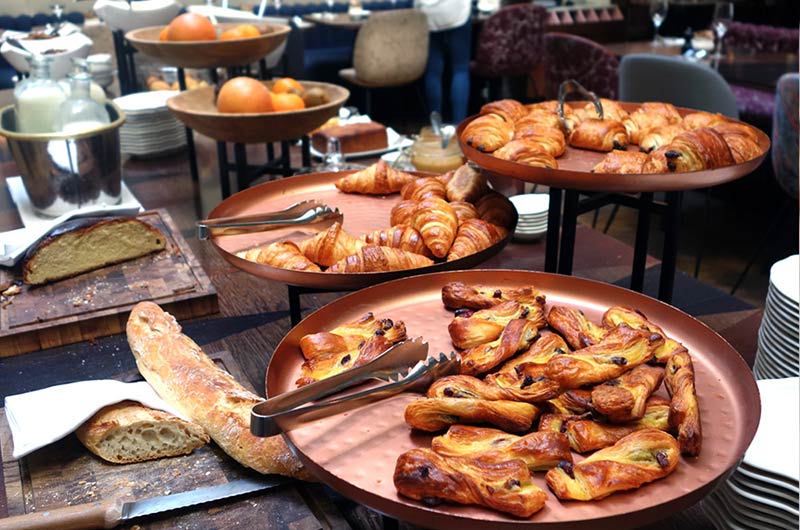 Breakfast buffet at the hotel

The next day, there’s still time for a few more Parisian delights. We head down to the Hotel Bachaumont's sunlit lounge to take advantage of the breakfast buffet - a spread of mini-croissants, pain au raisins, breads, cereals, buttery scrambled eggs, meats, smoked salmon and juices.

All too soon, it’s time for us to leave. After sneaking in quick a yoghurt creme de glace, and one last flaky pastry (when in Paris…), we head to the swish Eurostar Business Premier Lounge, in Gare du Nord. 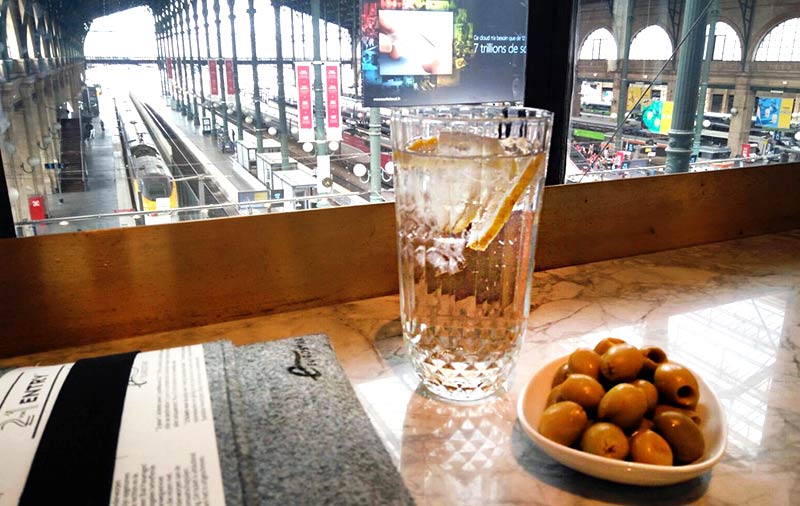 Time for one last gin...

Before we jump back on the train though, there's just time for one last indulgence - a handful of olives, and a gin and tonic made with Toujours 21, a fruity, smooth gin made by French chef Raymond Blanc for Eurostar. Quite the fitting end to a luxurious, custom-designed trip.

How to join the next Eurostar Interlude

This trip wasn't just a one-off, though. Another is planned for later in the year - which will have new hotels, ten new chefs for the evening and a brand new on-board experience lined up. So if all this sounds like just your thing and you fancy getting on the next one, sign up with your details here.

Hot Dinners were invited on Eurostar Interlude. In the interests of transparency, Hot Dinners' Gavin Hanly works at Eurostar (it's the day job!) but isn't involved with this project and wasn't on the trip.