Special dishes going on the menu for Pride London

Get your rainbow flags out - it’s time once again for Pride, and London’s restaurants and bars are primed and ready to show their support. Read on to find out where to get your multicoloured foodie fixes (and believe us, there are a LOT of rainbows) while showing support - and raising funds for many amazing LGBT organisations. 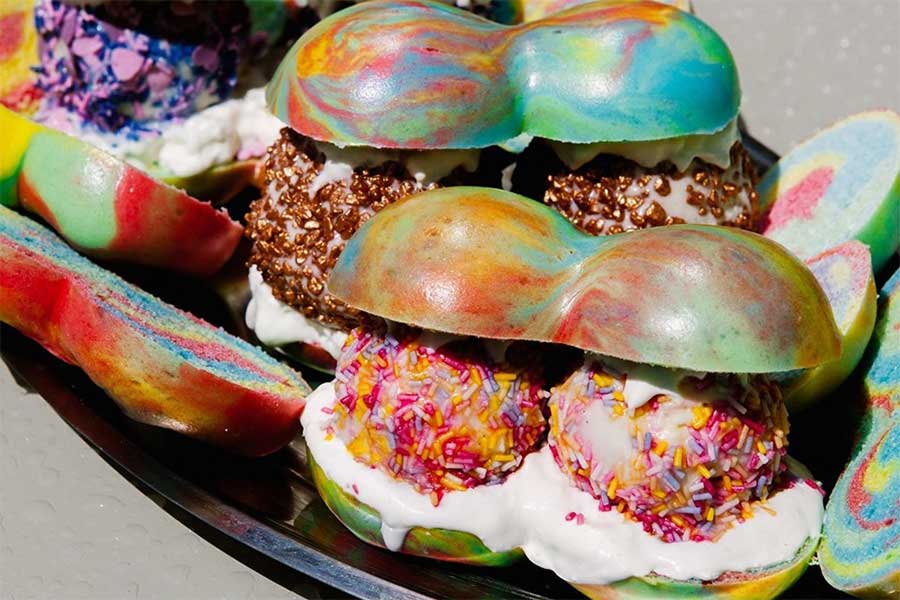 In Soho, Bao is celebrating Pride (and the passing of the same sex marriage bill in Taiwan this year) with a Twin Rainbow BAO with Banana & Dark Chocolate Ice Cream with Sprinkles.

Dominique Ansel is making a change to July’s Strawberry Jam and Poppy Ganache croissant-doughnut hybrid by adding a hand-cut tempered chocolate pride flag to it for this weekend.

Liquorette is throwing a party to celebrate London Pride! With a cocktail ‘lemonade stand’ outside inspired by the bar’s all-American heritage, face painting and even a white unicorn.

Vegan restaurant by CHLOE is selling the Funfetti Cupcake, topped with a creamy vanilla frosting and lashings of multi-coloured Smarties with 50p from every purchase going to Stonewall.

At Pastaio by Oxford Circus, they're putting on a Pride Cannoli Sundae featuring Pistachio ice cream and vegan chocolate sorbet with broken Cannoli shell, Cannoli ricotta, fresh raspberries, flaked almonds, lemon & broken pistachios. Oh and it also comes with a rainbow spoon and with a sparkler on top. It'll sell for £8 and £5 from every sale goes to the London LGBTQ+ Community Centre.

If you're after a party following the parade head to Nine Lives by London Bridge which is holding an aquatic party, together with CÎROC Summer Watermelon Vodka. There'll be an oceanic drag queen beauty pageant, boozy slushies & spritzers, DJs, bubble machines and paddling pools.

The Blue Posts is partying hard for Pride on all its floor. DJs Aaron and Wayne (Rhythm of the Night) will be playing the best tunes and the whole thing aims to be ultimate Pride Block Party. Buy an Aperol Spritz and a donation will be made to LGBTQ+ mental health charity, London Friend.

At all the Shake Shacks, there'll be a limited-edition Pride Shake on with £1 from each shake donated to Mosaic LGBT Youth Centre.

Fancy a rainbow cocktail? Well Temper have a Pride-inspired cocktail menu, with six cocktails, each coloured the six colours of the Pride rainbow all £6. £1 from each cocktail sold will be donated to Stonewall.