Recently it's been hard to avoid the explosion of French restaurants in London.  If it's not a great returning chef like Pierre Koffmann or Bruno Loubet then it's Daniel Boulud coming over to London to show us how to properly open a new restaurant.  While Boulud isn't over here permanently, there are some expert French masterchefs in the Capital - here are some of the best.

Le Gavroche is one of the top restaurants in London and is currently the best reviewed restaurant on Hot Dinners, with the critics giving it a firm thumbs up.

Currently under the stewardship of Michel Roux Jnr, best known by many for his run on Masterchef, the two Michelin starred restaurant is deemed by many to be one of the best culinary experiences in London.  It's ideal for a special occasion and although dinner certainly won't be on the cheap side, the set lunch can offer one of the best dining experiences in London for the money.

With some of the best service and food in town - this is a restaurant worth trying at least once.

See what the critics thought of Le Gavroche

When Pierre Koffmann returned for the special Selfridges pop-up, Restaurant on the Roof, last October - foodies were beside themselves with excitement.  Koffmann had long been thought to be one of the best-ever French Chefs after his three-starred Michelin restaurant La Tante Claire (Gordon Ramsay now occupies that space with his own three starrer).

It didn't take long for the chef to decide to come back for good and he's recently opened his eponymous restaurant in the Berkeley Hotel in Knightsbridge.  Offering an array of Koffmann classics mixed in with new creations, including a portion of chips served in a copy of Le Monde, this is a must-try for anyone who missed out on La Tante Claire the first time around.

See what the critics thought of Koffmann's 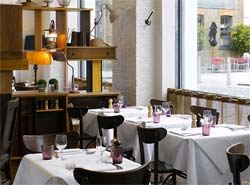 Another foodie/critic favourite, Bruno Loubet has recently returned from Australia to set up his new bistro in the Zetter hotel.

When we interviewed him back in February, there was already a great deal of anticipation for the restaurant before it opened, with many wondering if he could live up to the expectation.  They needn't have worried  as it's been one of the best reviewed restaurants in the past year and an instant hit.

Loubet has replicated a classic French Bistro in the Zetter, and has some classics on the menu - the Boudin Blanc, his signature Hare Royal and the upside-down panna cotta are all well worth trying.  Loubet certainly lived up to expectations and Hot Dinners had one of our meals of the year here.

See what the critics thought of Bistrot Bruno Loubet 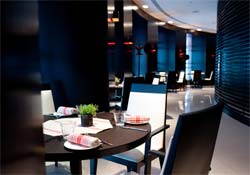 Yet another returning chef, Joel Antunes was best known for Les Saveurs restaurant back in the 90s.  He left for the States and has now returned as part of the new Park Plaza hotel in Waterloo and he told us he's glad to be back.

Some critics have been less than kind about the hotel surroundings, but praise has been heaped on Antunes cooking.  It's classic French brasserie food and a definite destination in an area which is rather short on top restaurants.  Besides the brasserie, Antunes manages all the food on the first floor of the hotel - which includes bar tapas, a sushi bar and a patisserie.

Find out more about Brasserie Joel

It's been a good year for Claude Bosi whose 2 Michelin starred restaurant Hibiscus made it into the World's Top 50 Restaurant list this year.  He also told us that he's looking to aim for three Michelin stars in next year's awards, so this could be the ideal time to try out the restaurant.

If you can't make it for a full meal both this and Koffmann's above are in the London restaurant festival's Gourmet Odyssey in October.

See what the critics thought of Hibiscus

Alexis Gauthier was best known for his Michelin starred restaurant, which he still has a stake in, but is now concentrating on the self-named Gauthier in Soho.

Already earmarked as a restaurant looking to pick up a Gauthier's next Michelin star and the lunch/pre-theatre menu is another deal worth grabbing.

See what the critics thought of Gauthier Soho


And there's loads more French cuisine coming, with rumours of another star chef, Eric Chavot, preparing his own restaurant and the people behind Arbutus preparing Les Deux Salons.  You can read all about these in our new and upcoming restaurants and also look at the top rated French restaurants in London.

If you want to know where else to enjoy the best of British food, view our full list of London restaurant reviews.