New alfresco spots in London for 2014

At the first sign of any sunshine Londoners head en masse for any place with tables outside. Here's our selection of new openings with alfresco dining that the mob might not know about yet. 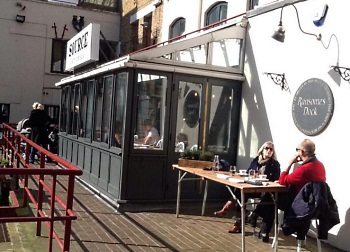 Source is right on the river at Ransome's Dock and although the 20-seat terrace doesn't officially open till next month with summer BBQs planned we've been assured that if the weather is good, then they'll be putting tables and chairs out. Grab some crab toast with lemon aioli enjoy a summer Reisling and pretend you're by the Med. 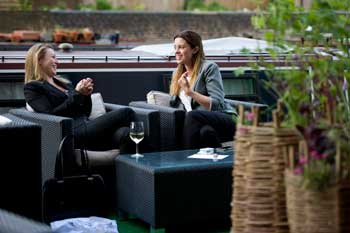 The restaurant here has been around for a while, but the outside space has had a radical redesign for 2014 with a stretch of lawn, open bars, loungey seating and easy-going summery BBQ food. You can play giant chess or Jenga on the lawn and with room for 150 folk to dine and drink here, there's plenty of space. Book the private dining room and you even get your own private bit of terrace. 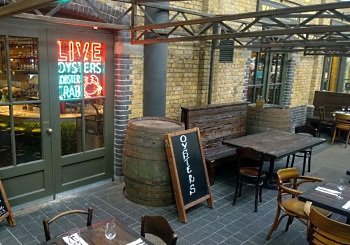 Technically the terrace at Wright Bros Spitalfields isn't 100% alfresco as it's in the covered part of Spitalfields market. But it certainly feels like eating outdoors, minus any chance of a shower. Create a DIY platter of fruits de mer and - with a bottle of Picpoul in the wine cooler - you're set for the summer.

Up in the air 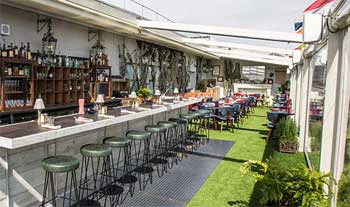 On the Roof with Q - Selfridges, Oxford St, W1

This new rooftop restaurant and bar up on the top of Selfridges runs till September with Q Grill serving up food from late breakfast to dinner. The roof is retractable (for any sudden downpour) and we rather like the idea of an alfresco afternoon tea up here.

More about Q on the Roof 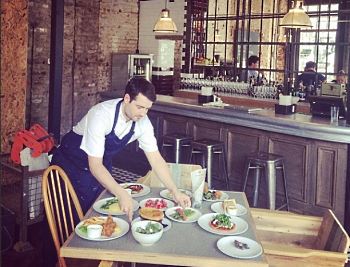 The rooftop on this new City gastropub features an urban allotment plot but there's also room to eat and drink. Starting in mid July, they'll be having picnics three nights a week with space for 50 and a welcome drink for everyone alongside a special menu.

More about The Culpeper 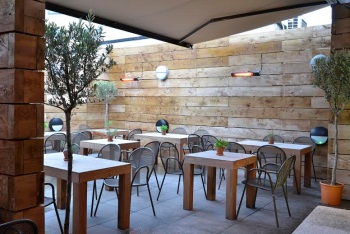 As the terrace at Vivo only opened last Autumn and has had a bit of a redo since with the addition of some olive trees and lighting, it scrapes into this year's new alfresco category by the skin of its teeth. Tucked up on the roof overlooking Upper Street, this hidden away gem will be a lovely place to enjoy artisan salads such as the Salmon, Black Venere Rice with Oven Roast Tomatoes and Rocket, or the Pomegranate and Stracciatella with Balsamico and extra virgin olive oil. 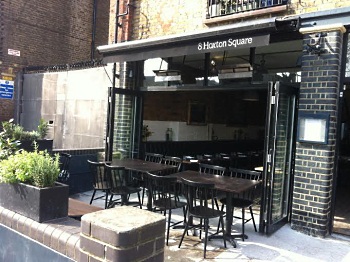 8 Hoxton Square has a pretty big terrace on Hoxton Square which has barely any traffic, so it's a great place to sit out. There are a fair few tables and they'll set them up whenever the weather's good. If it's on the menu, the octopus carpaccio is blinding and the sea bass with romesco and chicory is good too. 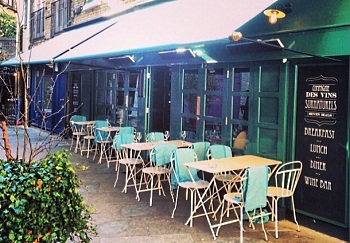 Compagnie des vins surnaturel has a nice little line of tables on Neals Yard. There's room for about 12 people to eat outside. The menu changes all the time, but recent dishes have included Burrata with Carasau Bread & Cherry Tomatoes and Tuna Tataki with courgettes marinated in ginger. 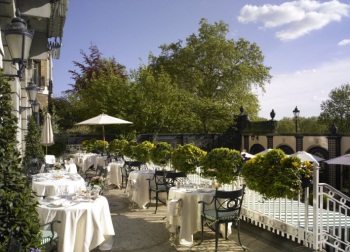 Hold on a second, hasn't this terrace been there for ages? Well yes, but it used to the preserve of those dining at the restaurant here. Now it's open from 3-7pm weather permitting for champagne, cigars and a canape selection from chef John Williams. The hotel's dress code still applies - jacket and tie (although you can remove your jacket once on the terrace).

More about The Ritz restaurant 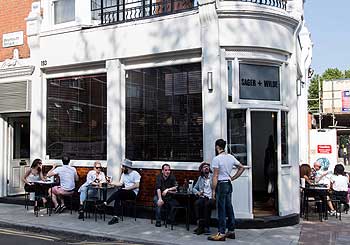 They opened at the end of last summer, but Sager & Wilde have only recently been able to add some pavement tables here. There's now room for around 25-30 people to work their way through the extraordinary wine list here whilst enjoying the summer sunshine too.

More about Sager and Wilde 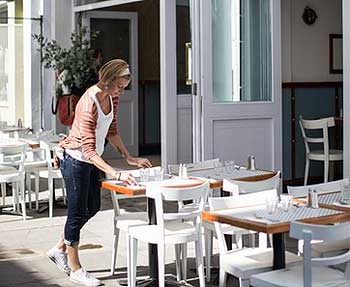 Newly opened on Exmouth Market, Bonnie Gull has loads of south-facing pavement tables - perfect for a spot of post-work eating, drinking and sunbathing. Skip out of work a bit earlier and you can avail yourself of their new Bonnie Hour from 4.30pm to 6.30pm where a range of cocktails can be had for £5 and oysters for £1 each. 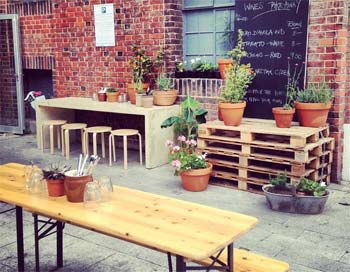 Now settled in its new location, Rawduck has added a terraced area that seats 32 to go alongside a selection of summer dishes that include hot smoked trout, rare hanger steak. All this alongside juices, ferments, pickles and more that they all make in-house. 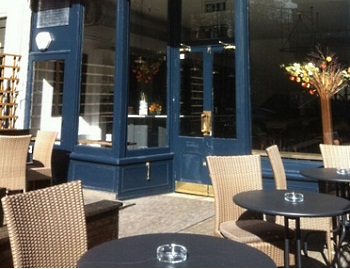 Bibo - the new restaurant in Putney with an ex-Theo Randall chef in the kitchen has 18 seats out on the pavement on Upper Richmond Road. Potato and n’duja crocchette sound like a good way to kick off and the bombolini (doughnuts) with Amalfi lemon curd will transport you (if you forget the passing traffic) to the Neapolitan riviera. 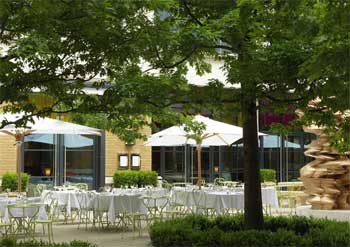 Newly open in Soho/Piccadilly - this is one of the very few places in central London where you can eat or drink outdoors without traffic rumbling past. As you might expect then it's already a tad difficult to get a table here. There's plenty on the bar food menu for you to enjoy with a carafe of wine while you star spot (we managed Keira Knightley and Mark Ruffalo on a recent night out here). 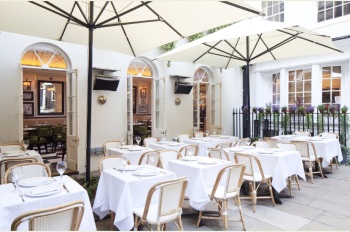 Boulestin in St James has a number of tables laid with white linen and shielded from the sun by huge umbrellas on a hidden Georgian courtyard, Pickering Place. It's accessible through the restaurant from the dining room or from St James’ Street through an 18th century oak-panelled tunnel and a lovely spot to enjoy their oeuf en gelée or roasted cod with lentils & salsa verde. 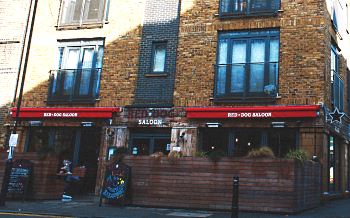 Almost opposite Clapham North tube station, the new Red Dog Saloon features a lovely west facing terrace with all wood decking, wild grass and wooden banquette seating and tables. There's room for 32 people to sit, enjoy frozen margarita and a spot of alfresco BBQ or a sandwich in the sun. 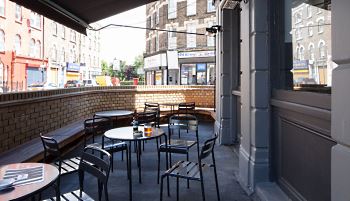 This new Clapton wine bar/deli has a lovely terrace out in front, properly separated from the pavement and with plenty of space. It'd be a perfect place to sit with a glass of wine and one of their charcuterie and cheese boards, soaking up the sunshine or to have an alfresco brunch at the weekend.

Launching on July 16th Tanqueray No. TEN will be transforming the rooftop back bar at Vista (The Trafalgar) into a Citrus Garden with weekly cocktail masterclasses.

Catch the morning sunshine over at newly-opened Poppy's Place on Fulham's Munster Road with a plate of Smashed avocado on toast with poached egg or grilled bacon or chorizo.

If you want to know where else to enjoy the best of British food, view our full list of London restaurant reviews.