West London is the focus of our final feature in our exploration into London's neighbourhood restaurants (see Part 1: East London, Part 2: South London and Part 3: North London). This series has seen us sweep the four corners of the capital in an attempt to uncover interesting, everyday, casual as well as formal establishments which are known for delivering a quality experience and value for money a short journey from your nearest underground station.

West London dining is wider than just the 'West end', and whilst we were tempted to march down the Kings Road and up Kensington High Street in search of appealing eateries, we found that residents in areas further West are indeed increasingly well served. Below we've made our selection from a variety of neighbourhoods which reflect the diversity of both established and newer offerings which are well-kept secrets of many a west Londoner. 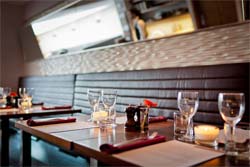 Where is it? Situated on a predominantly retail-focused strip a few minutes walk from Turnham Green tube station, Charlotte's Bistro is a Bib Gourmand awarded independent restaurant, the second from restaurateur Alex Wrethman, who also owns Charlotte's Place (in nearby Ealing).

What should we have? Seasonality is a driving force behind Head Chef Wesley Smalley's ever-changing menu. Recent months have ushered in hearty offerings such as Shepherds Pie, Pheasant Sausage and Lamb Shoulder paired with Winter vegetables, carrots, kale and cauliflower and wild mushrooms. The cocktails and wine list also pivot to reflect the change of seasons. With an evolving cocktail menu starring around 35 gins and an extensive wine list starting at just £18, all bases are covered.

Worth the journey? Alex, with the support of operations director and experienced sommelier Matthew Mawtus, has gone to great extents to ensure that his regulars remain just that. Charlotte's is equally attuned to host casual drinkers as it is parties for private diners. They serve a great value Early Diner menu (3 courses and aperitif for £26.95) and have just launched 'Gin Mondays' which see artisanal gin producers come to Charlotte's to showcase their product and educate customers, all done free of charge. 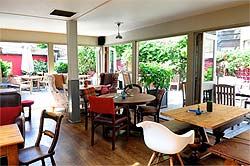 Where is it? In a district usually identified by its flyover and shopping centre, the recently opened Thatched House from the owners of South London institution, The Shi,p is a step in the right direction. It can be found perched on the corner of Paddenswick and Dalling Road, a stone's throw from Ravenscourt Park.

What should we have? If you've dined at The Ship before, you'll be accustomed to the hearty, no-nonsense pub menu which has so enthused residents south of the river. Well-seasoned pub classics such as Pork Pies and Scotch Eggs sit comfortably alongside more substantial dishes such as Confit Duck, Schnitzel and Salmon Fishcakes. To drink, expect a full complement of Young's beers, but don't miss the selection of small scale London Brewers and Distillers Meantime, Sacred and Sipsmith, available at a competitive price for these parts.

Worth the journey? Open for a matter of months The Thatched House is aiming to become more than just a local favourite, lining up an enviable series of events from well known chefs and bloggers including Masterchef 2011 winner Tim Anderson and dinners from well known bloggers Rocket and Squash and Eat Like a Girl. For more information and to book, visit the events page on the Thatched House website. 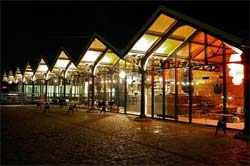 Where is it? Located in a converted Victorian Wharf Building inside the Portobello Dock complex, the Dock Kitchen in Ladbroke Grove is close to the Portobello Road. Here, head chef and proprietor Stevie Parle has established his West London restaurant in an unlikely space, across the way from famed designer Tom Dixon.

What should we have? Parle hails from a family of chefs and restaurateurs. Training behind the stoves of Moro, Petersham Nurseries and The River Cafe, his menus feature an eclectic mix of dishes from disparate cuisines ranging from Sri Lankan to Japanese. Expect everything from tagines, French stews and Lamb biryani with an equally eclectic wine list sourced from top new world and old world estates.

Worth the journey? It wouldn't be far from the truth to claim that The Dock Kitchen has put Ladbroke Grove on the culinary map of West London. Eclectic cuisine in an inspiring environment keeps residents from across the tracks (in Kensington) and further afield returning time and time again. 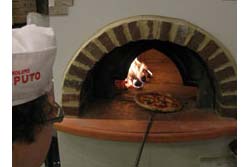 Where is it? Ealing is more than just a transport hub en route to Heathrow. For many years it has been home to a vibrant and diverse community. Santa Maria is located halfway down St Mary's Road between Ealing Broadway and South Ealing underground stations.

What should we have? Santa Maria is heaven for pizza lovers. Made in a Neapolitan style, their 'Santa Maria' starts at a mere £5.45 and top out around £11. The dessert offering is also great value, two scoops of Italian gelato from local Oddono's Gelati for £4.00. Impressively, for all its value, the proprietors aren't cutting costs on their ingredients. Expect to see Italian Mozzarella, Parma Ham and Neapolitan Sausage used as standard toppings.

Worth the journey? Established in 2010 by Pasquale Chionchio and Angelo Ambros, Santa Maria is part of a new generation of Pizza establishments in London focused on using original recipes and firing their breads in 100% wood fired ovens. It will be of no surprise that they've just been listed as one of London's best cheap eats restaurants by The Sunday Times. Suddenly, zone 3 doesn’t seem so far away. 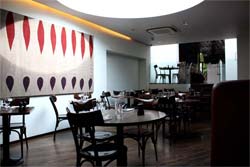 Where is it? Bayswater, an area peppered with cheap eats and chain restaurants doesn't readily spring to mind as a location for a decent neighbourhood. Nevertheless, if you head towards Westbourne Grove you'll find Hereford Road wedged between residential villas. Here Tom Pemberton, serves up no-fuss British cuisine at surprisingly reasonable prices

What should we have? Meat, game and seafood are the strong suits of any gastropub worth its salt and Hereford Road serves these up in spades. Try the pot roast duck leg and fennel, the grilled onglet or share a whole line-caught seabass between two. For dessert, classic sticky date pudding, apple crumble and buttermilk pudding await. A set lunch here is just £13.00 for two courses or £15.50 for three.

Worth the journey? Meat, game and seafood are the strong suits of any gastropub worth its salt and Hereford Road serves these up in spades. Try the pot roast duck leg and fennel, the grilled onglet or share a whole line-caught seabass between two. For dessert, classic sticky date pudding, apple crumble and buttermilk pudding await.

And while you're out west, also try...