Some of London's best food can be found in its greatest pubs. We've rounded them all up from those serving amazing scotch eggs to top steak and Michelin-starred pub food. 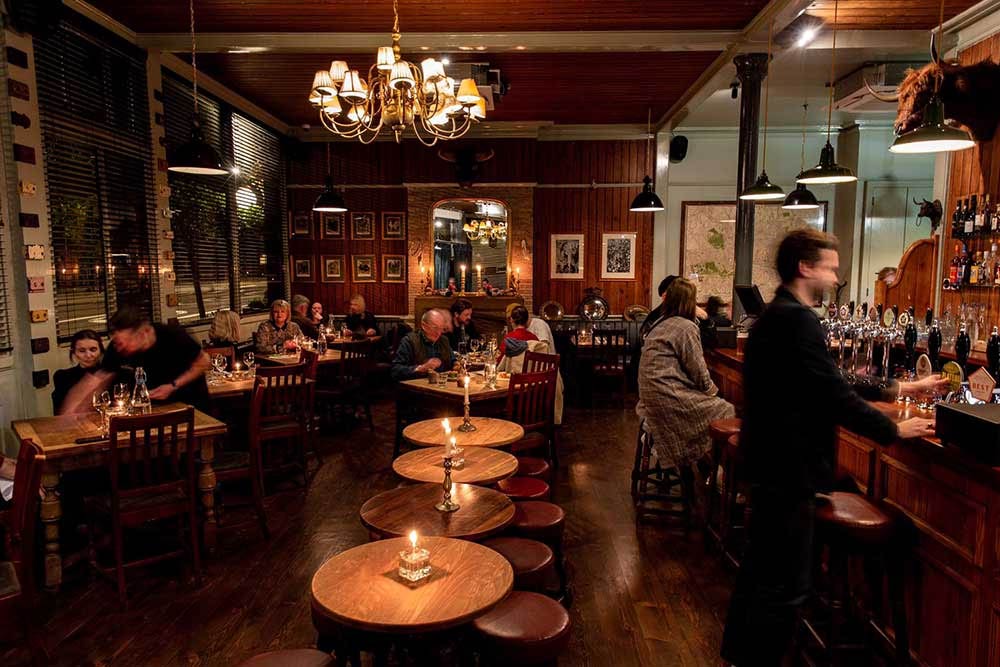 This Highgate pub on the fringes of the heath has long been a beacon for great pub cooking - they have even brought out their own cookery book. Food here is a mixture of simply done well - so you might find buttermilk fried chicken with aioli on the menu alongside more esoteric pairings like smoked eel and Alsace bacon tagliatelle with egg yolk and Berkswell.

More about The Bull & Last 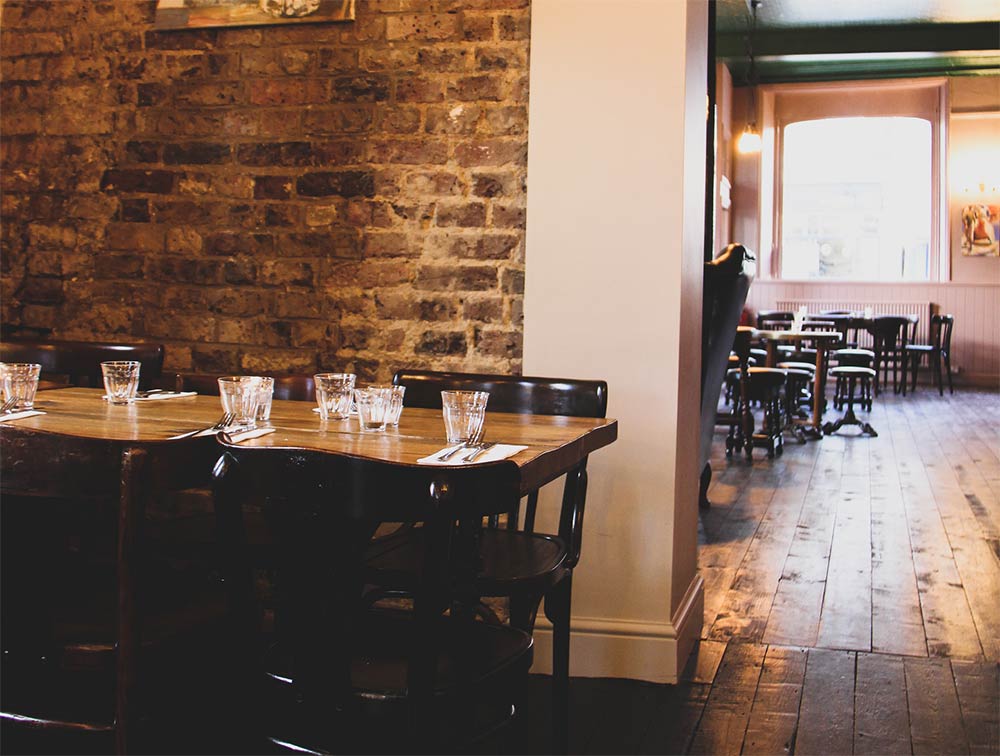 From the team who brought us the Anchor & Hope, this reworking of a much-loved Stokie pub not only serves up top-class gastropub food on Church Street, it also has a deli that was born in lockdown and survived to be a very handy foodie hub here. Menus celebrate what’s good in season and the desserts are particularly strong.

More about The Clarence Tavern 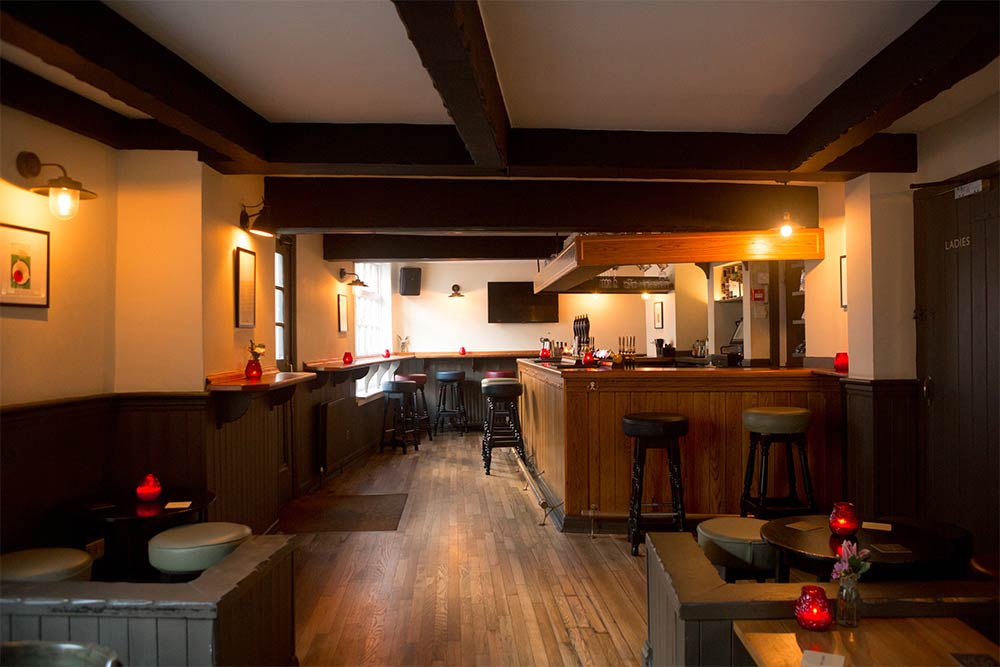 Nick Stephens, owner of The Compton Arms, has a good eye for spotting potential in the residencies he lures to this tucked-away pub in Canonbury. His latest find is Belly run by Reece Moore, who was previously head chef at Satsu at The Gun. The menu changes regularly with a focus on British produce and it’s a top place to meet up pre or post a game at the Emirates.

More about The Compton Arms 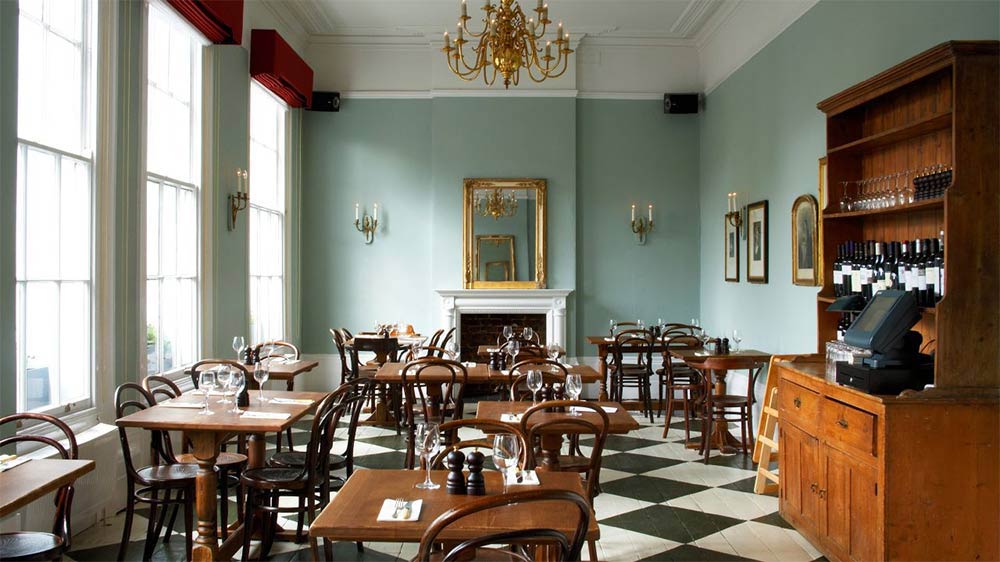 With landlord Nick Gibson in charge of affairs at this Barnsbury pub you can be assured not only of great food, but an award-winning wine list to boot. There’s always a really good pie on the menu, which raises funds for Action Against Hunger and it’s a particularly good place to go if you’re looking for great fish or veggie options.

More about The Drapers Arms 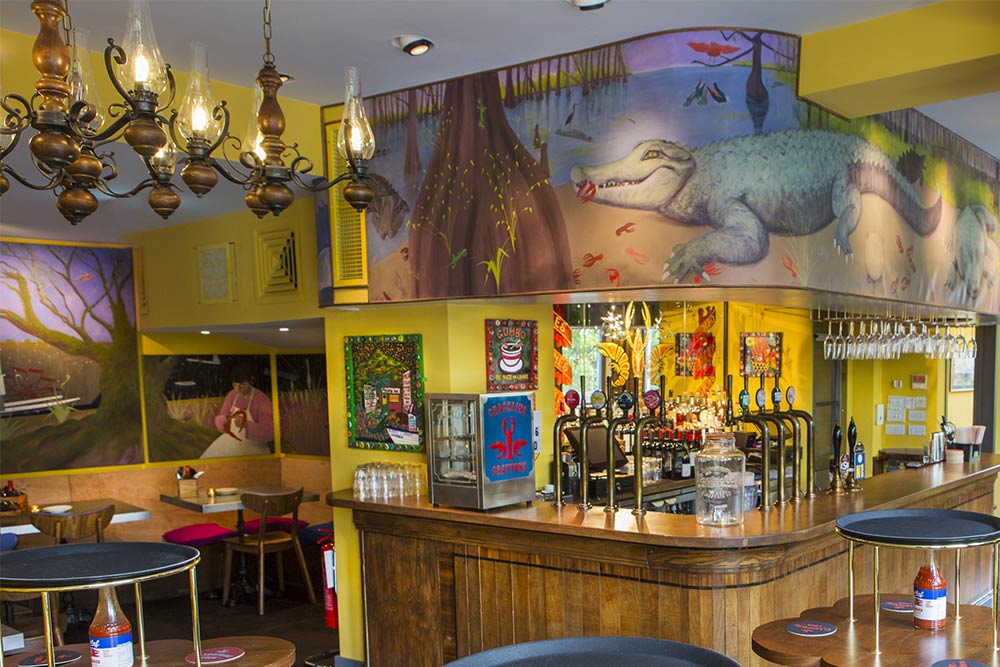 You’ll find this Islington pub just beside the Regent’s Canal, but the food here is inspired by a very different body of water - the Bayou. Cajun and Creole food are the order of the day here with shrimp and grits and Po’boy sandwiches on offer alongside an extensive oyster bar selection. 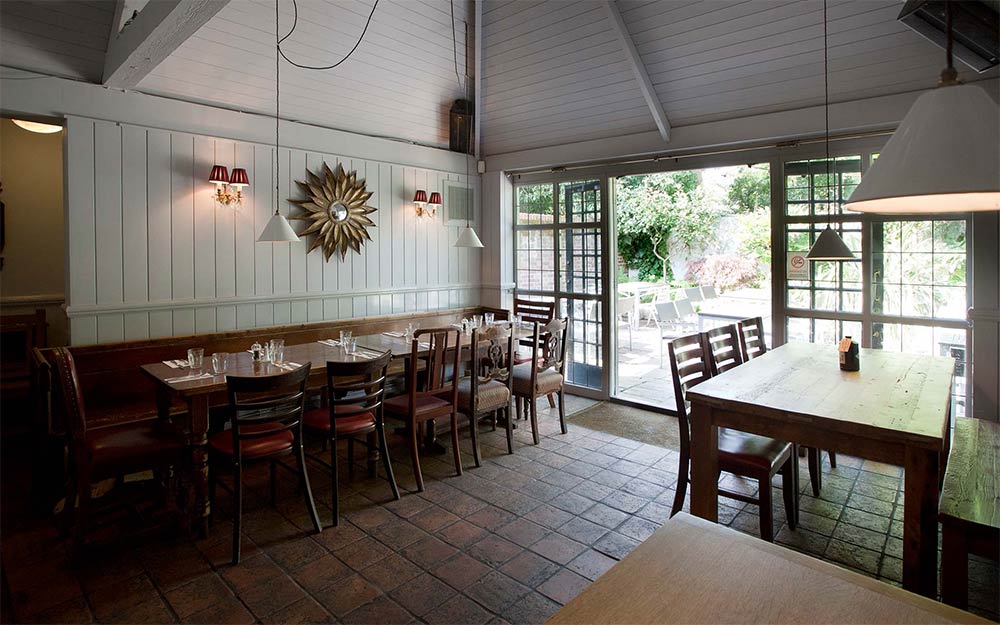 The Red Lion and Sun

Back in the 16th century when the first inn opened on this spot, this would have been a coaching inn en route to London. Now it attracts celebrities and Highgate foodies alike who adore the front and back gardens in summer, and the cosy interiors in winter. Landlord Heath Ball and his team serve up an elevated pub menu that celebrates its ties with producers and the wine list is legendary.

More about The Red Lion and Sun

Smokehouse(Islington) - This Islington pub is - as the name suggests - big on cooking over fire. 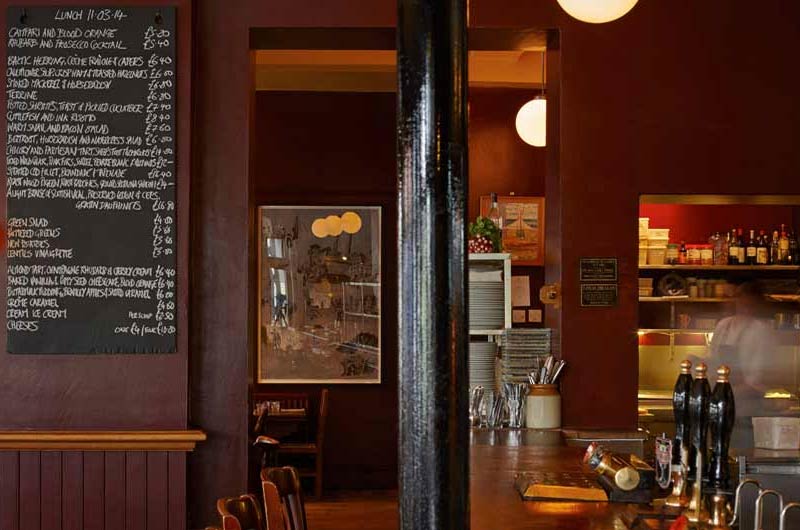 The Anchor and Hope

Ever since this Southwark pub burst onto London’s gastropub scene, it’s been serving standout food down behind Waterloo station. Inspiration for the menu roams around Europe, so you’re as likely to find vitello tonnato here as you are potted shrimps on toast. There’s a strong emphasis on desserts here too

More about The Anchor and Hope 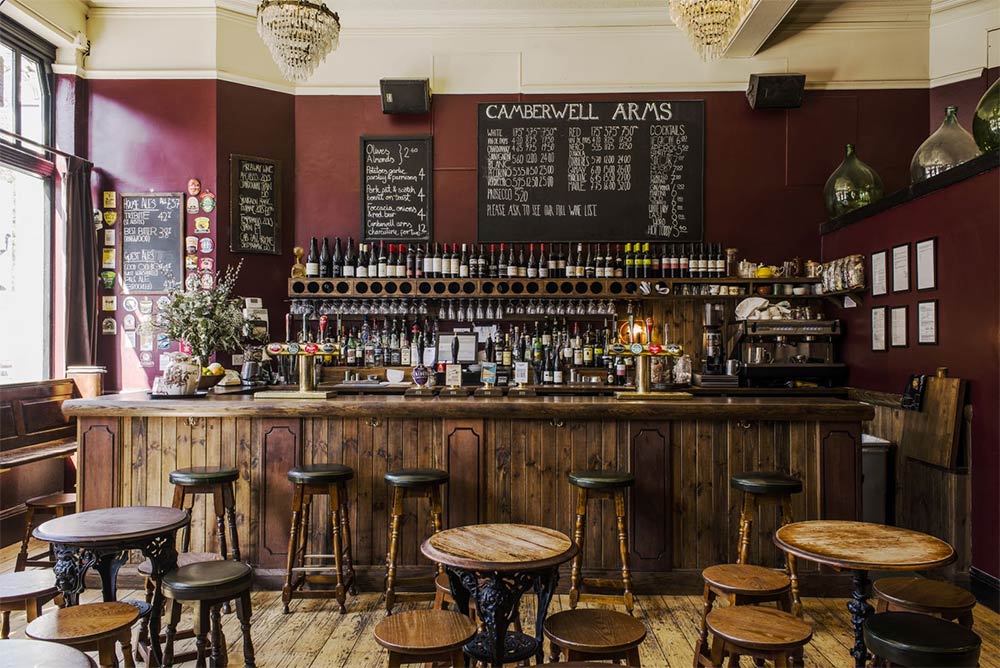 A multi-award-winning South London gastropub, the kitchen team here pride themselves on making as much as they can in-house from their charcuterie and bread to ice cream. Menus change regularly and read very well - with many dishes designed to shine when cooked over their charcoal fire. Sunday lunches are particularly good.

More about The Camberwell Arms 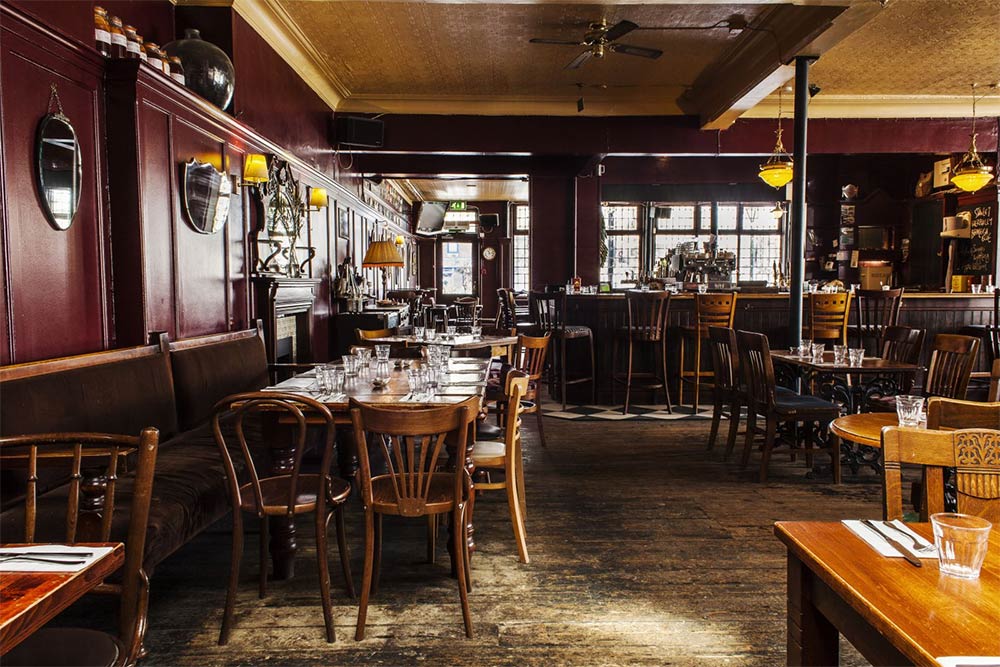 Even the drinks are seasonal at this Stockwell pub - from fresh lemonade and strawberry spritzes in summertime to Camparis with blood orange in the winter. The daily menu is a masterpiece of great gastropubbery - a recent one included summery chilled cucumber and coconut soup alongside a Dexter beef lasagne with chips for two - something for everyone. 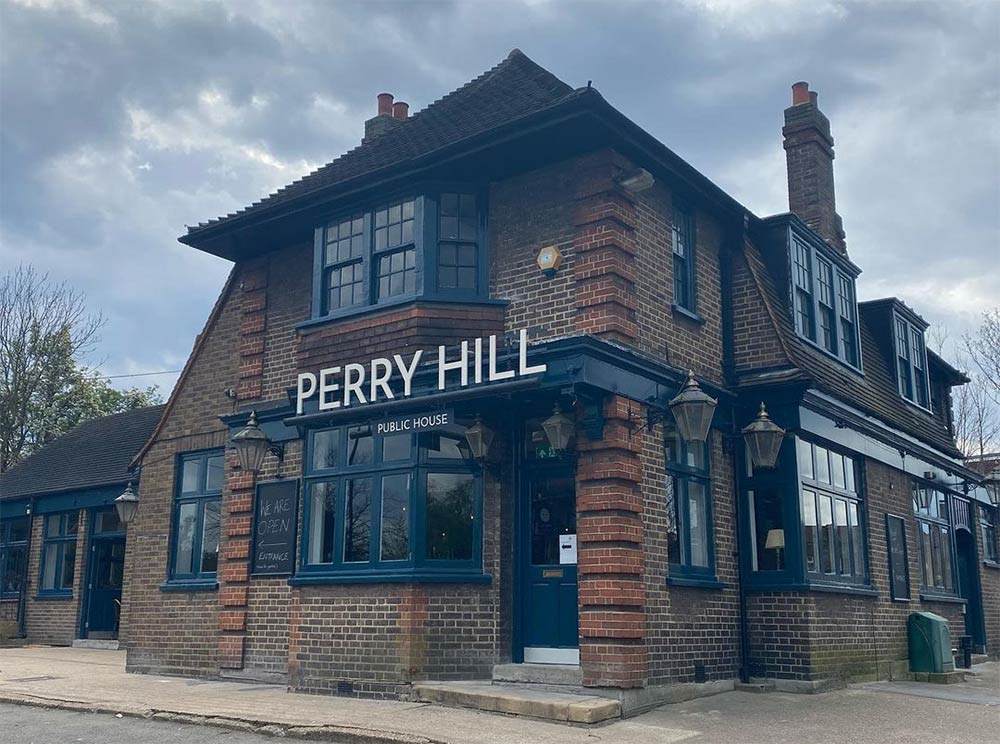 The new team at this much loved South London local came roaring out of the gates at the end of lockdown. Husband and wife team Phil Sutton and Oonagh McCormack had a wealth of pub experience before they took this on as their own project. A bespoke smoker means BBQ is a big thing here, but it’s not just a meat fest, there’s a lot of love for vegans here too.

Dartmouth Arms (Forest Hill) - This pub has just become the first MEATliquor pub, so expect great burgers (and a few specials just for this location) 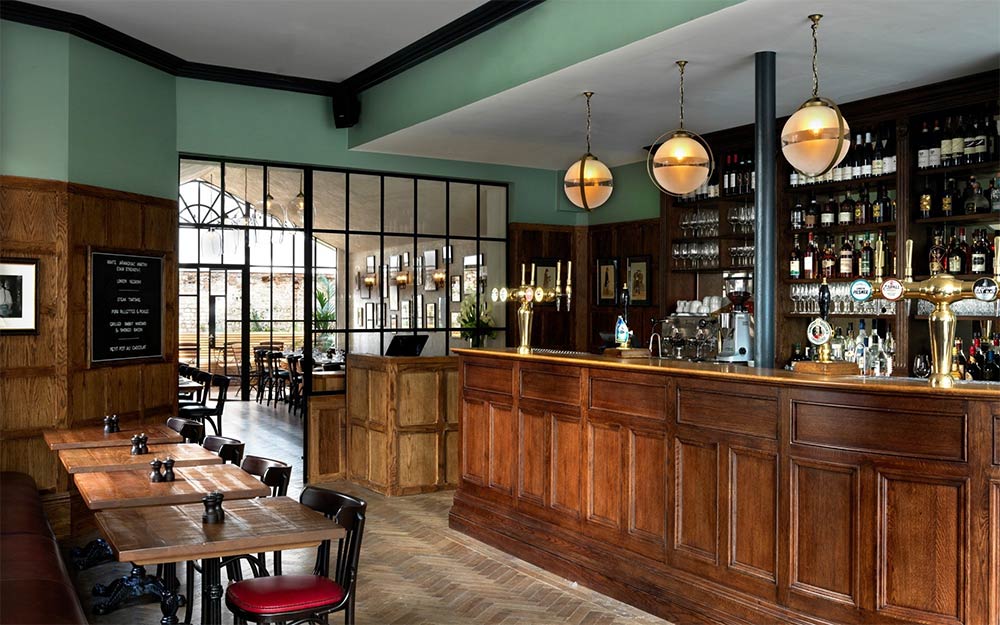 This was the first pub to get the chef Henry Harris touch (although he’s since moved on) so the menu here is a great mix of French and British influences. There’s usually rémoulade accompanying some dish here song with seafood from Devon and salad from Cornwall. And any wine list that includes a great value Planeta from Sicily is worth checking out.

More about The Coach 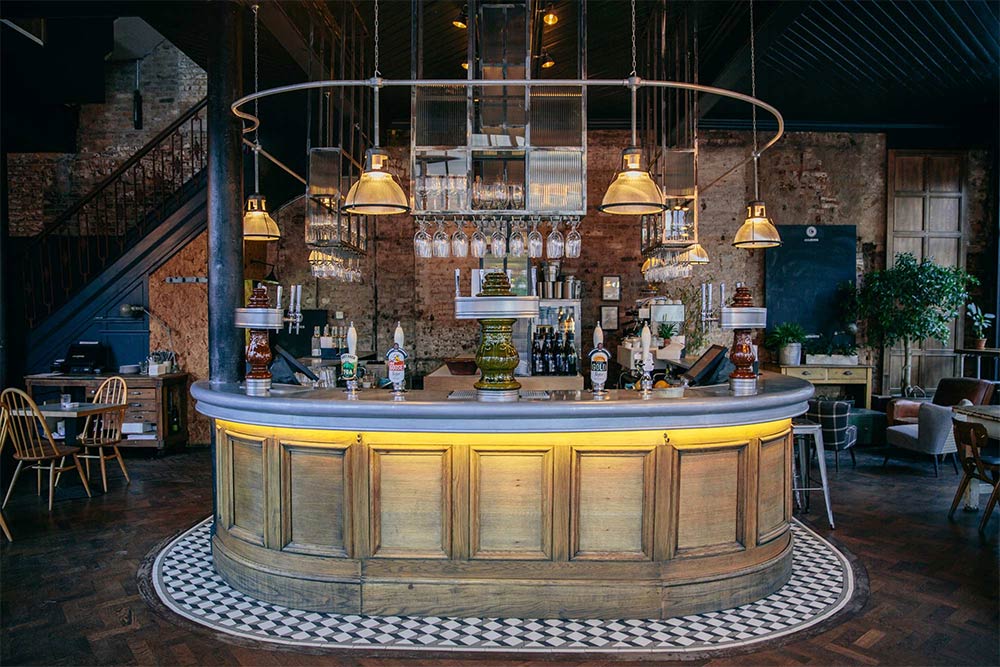 From its ground floor dining roof and first-floor dining room to the rooftop terrace, there’s been a lot of love lavished on this Aldgate pub. This is a place that spends as much time on perfecting its pub bacon sandwich as it does the accompaniments of a burrata starter with nettles and pickled kohlrabi.

More about The Culpeper 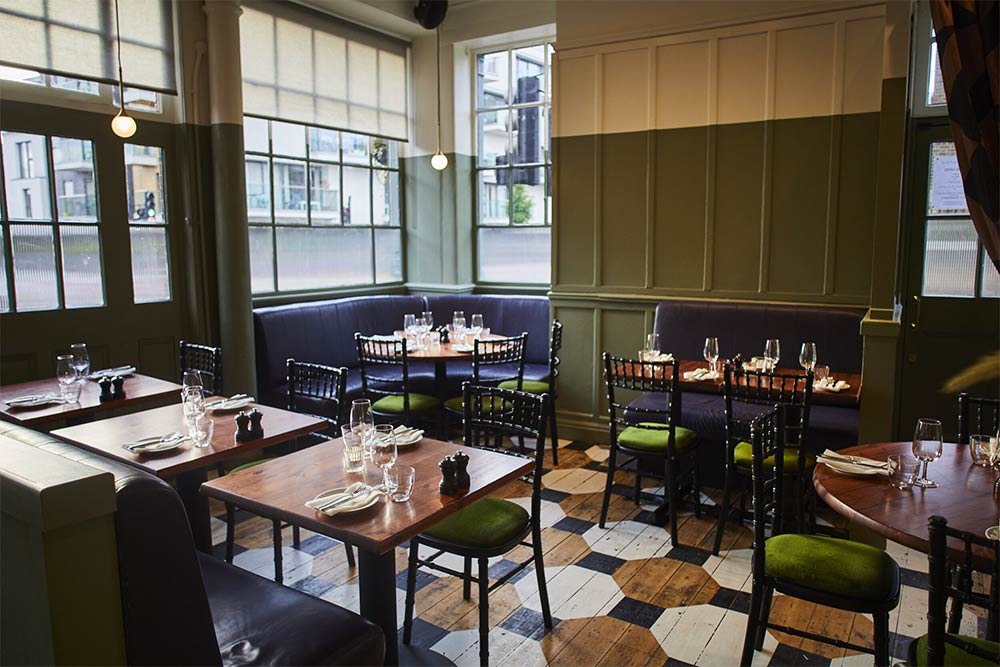 The Duke of Richmond

Tom Oldroyd's Hackney pub has some top burgers on the menu, including the signature burger with roquefort, béarnaise & confit onions. A must-have is the Cornish crab chip butty while the wood-fired grill features dishes from butterflied Scottish mackerel to za’atar roasted baby aubergines. You'll definitely want to finish with a dulce de leche choux bun.

More about The Duke of Richmond 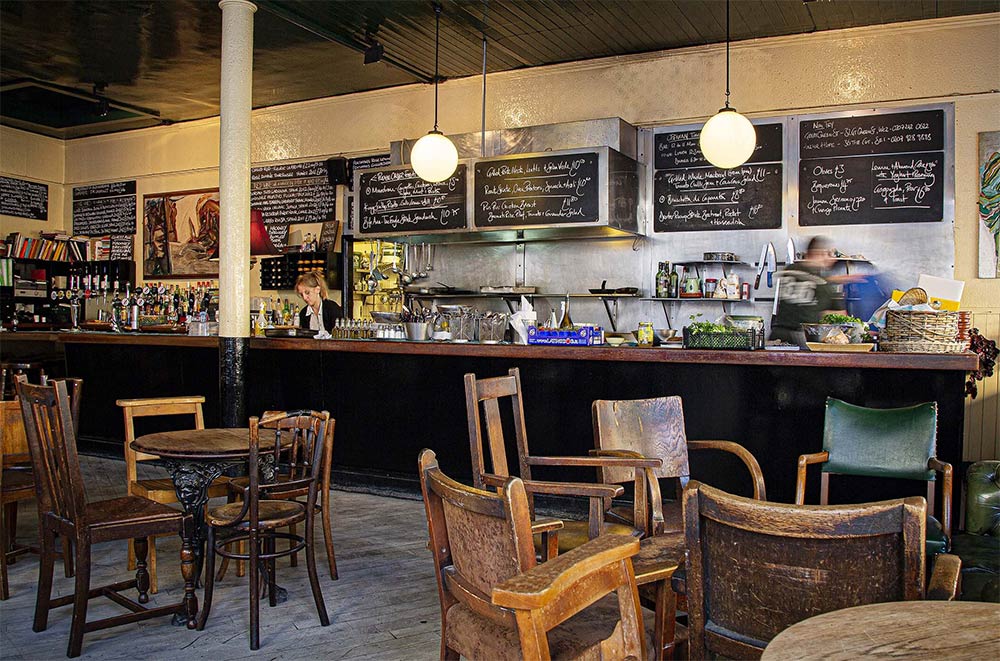 The Eagle is considered by many to be the birthplace of London's gastropub scene back in 1991 and the menu remains excellent to this day. Their steak sandwich is phenomenal and the main grill menu, written on a blackboard behind the bar, changes daily (sometimes twice daily). Check their Instagram account for what's on today.

More about The Eagle 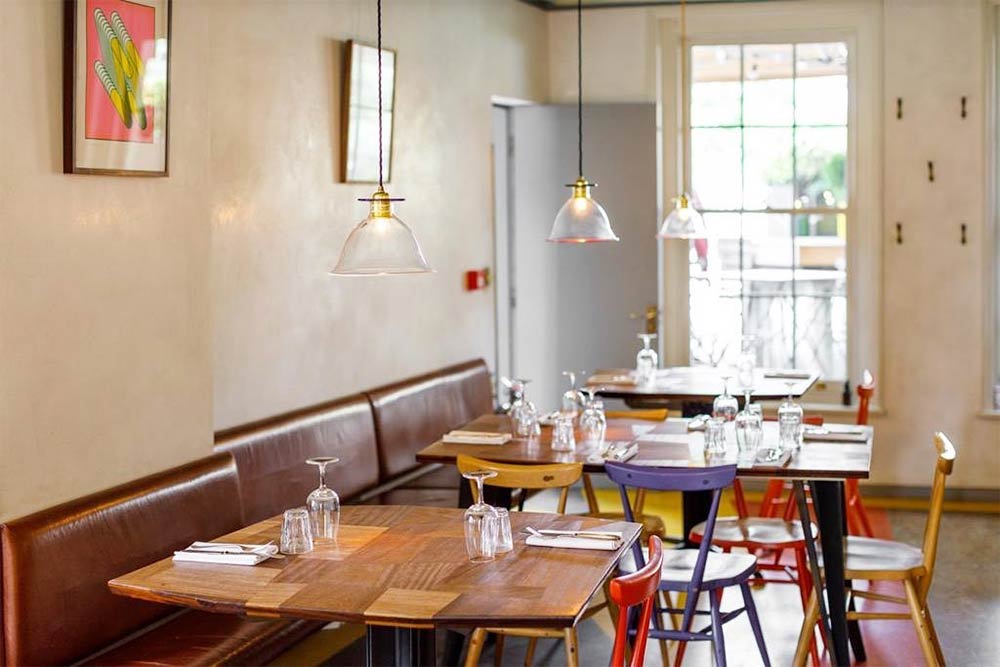 The Marksman saw St John chefs Tom Harris and Jon Rotheram convert this pub to being one of London's key foodie destinations. Upstairs is the main restaurant with a seasonal menu that includes mainstays like their phenomenal brown butter and honey tart (order it early in case it runs out). If you're in the pub downstairs, you'll definitely need one of their beef and barley buns with your pint.

More about The Marksman 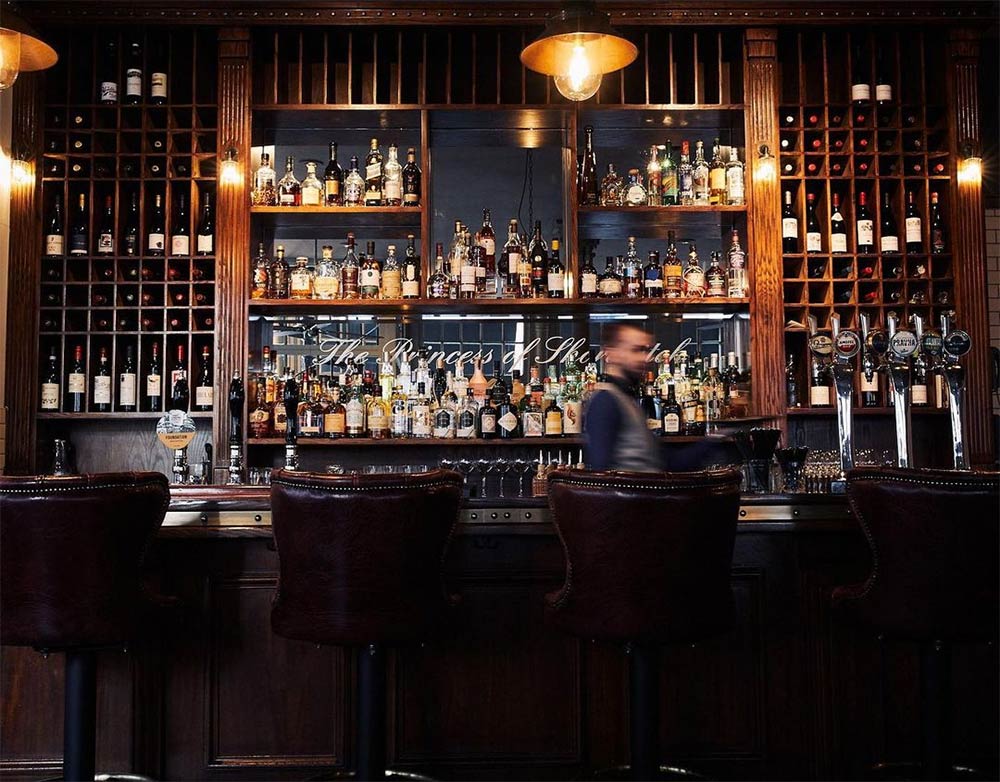 The Princess of Shoreditch

This Shoreditch pub has had a relatively recent revamp and brought in top chef Ruth Hansom to completely revive the menu too. The main event is the upstairs restaurant which has two tasting menus featuring dishes like Red Mullet Ceviche and Salt aged duck. If you're in the bar downstairs, it's an a la carte menu that's all about the duck fat popcorn, tempura courgette or a great beef wellington.

More about The Princess of Shoreditch 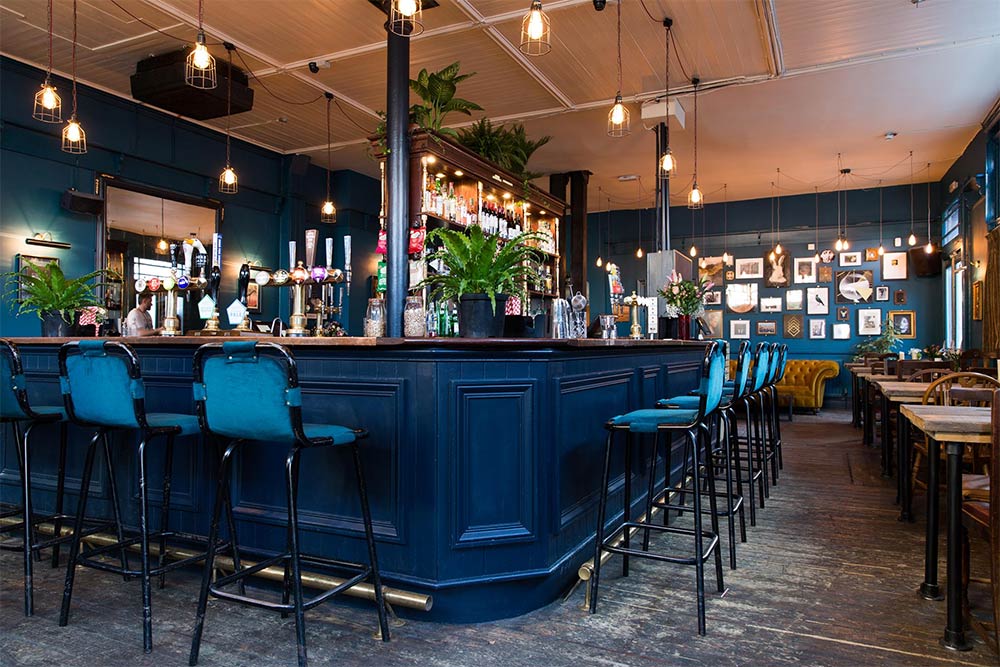 This is London's first 100% vegan pub, with the food drink and fixtures and fittings all plant-based. Snacks include a mushroom & "shamembert" pasty and there's even a ploughman's board with a "porkless pie".

More about The Spread Eagle

Scolt Head (Dalston) - There's a strong focus on provenance at this pub, with a weekend brunch menu by Nuno Mendes 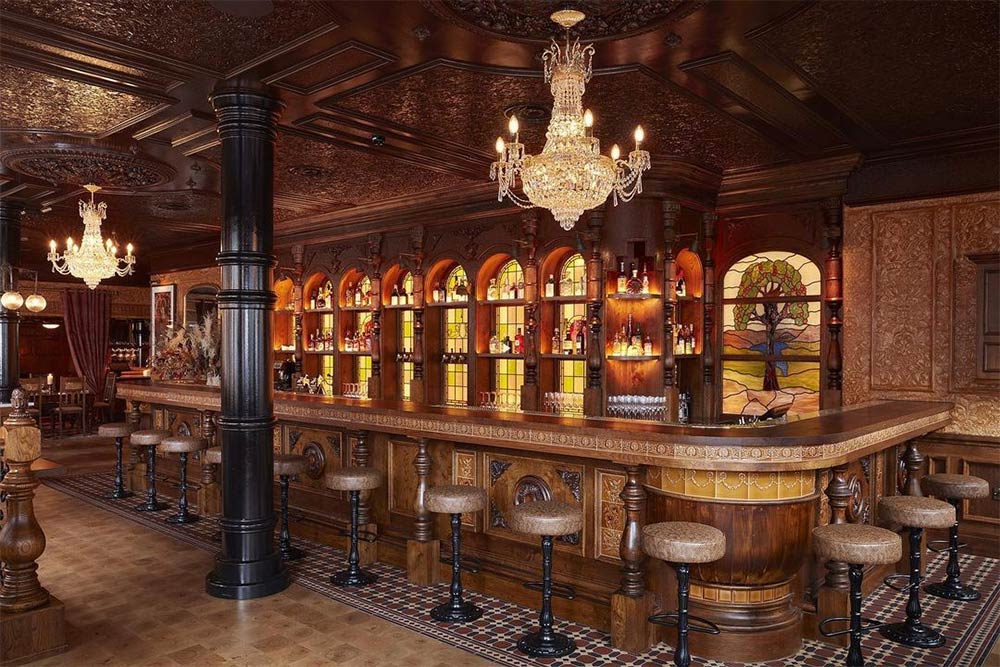 This Chelsea pub has recently been given a major overhaul and that includes the menu. It's now overseen by Kitchen Table's James Knappett and has ex-Harwood Arms chef Alex Harper in the kitchen. Bar snacks include some excellent boneless lamb ribs and braised lamb Cornish pasties, while there's a showstopping sherry trifle on the main restaurant menu.

More about The Cadogan Arms 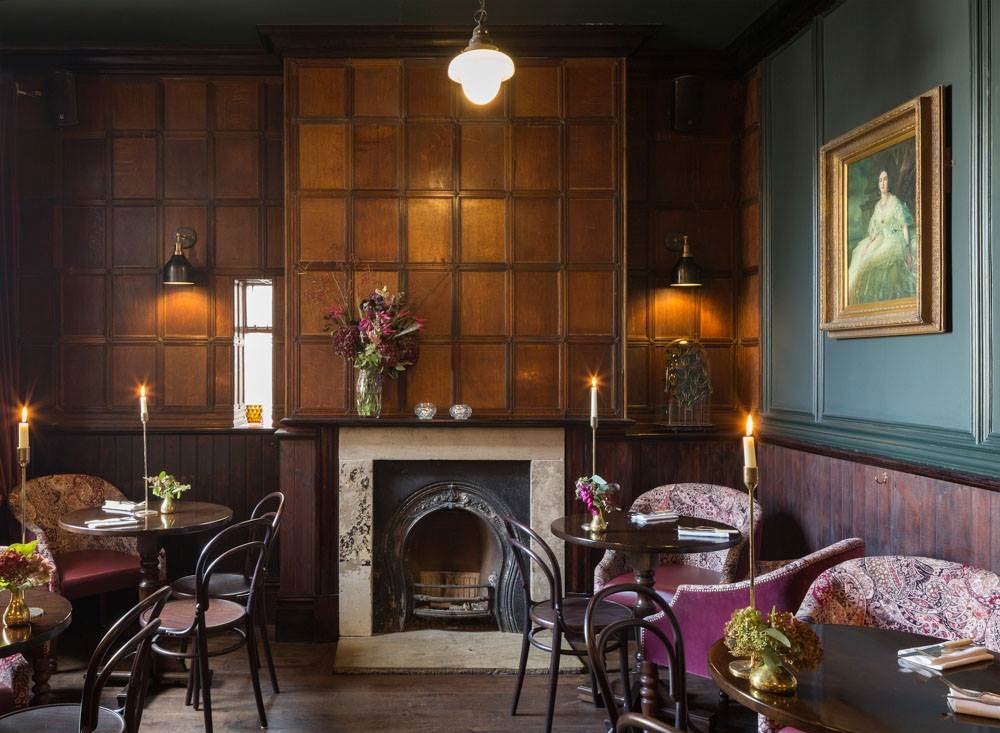 The Cleveland Arms has been around since 1842, and it remains one of the best pubs for food in the area. The menu changes regularly, but the onglet steak with mojo verde and confit potatoes is well worth a try. (Note - kitchen reopens September 2021)

More about The Cleveland Arms 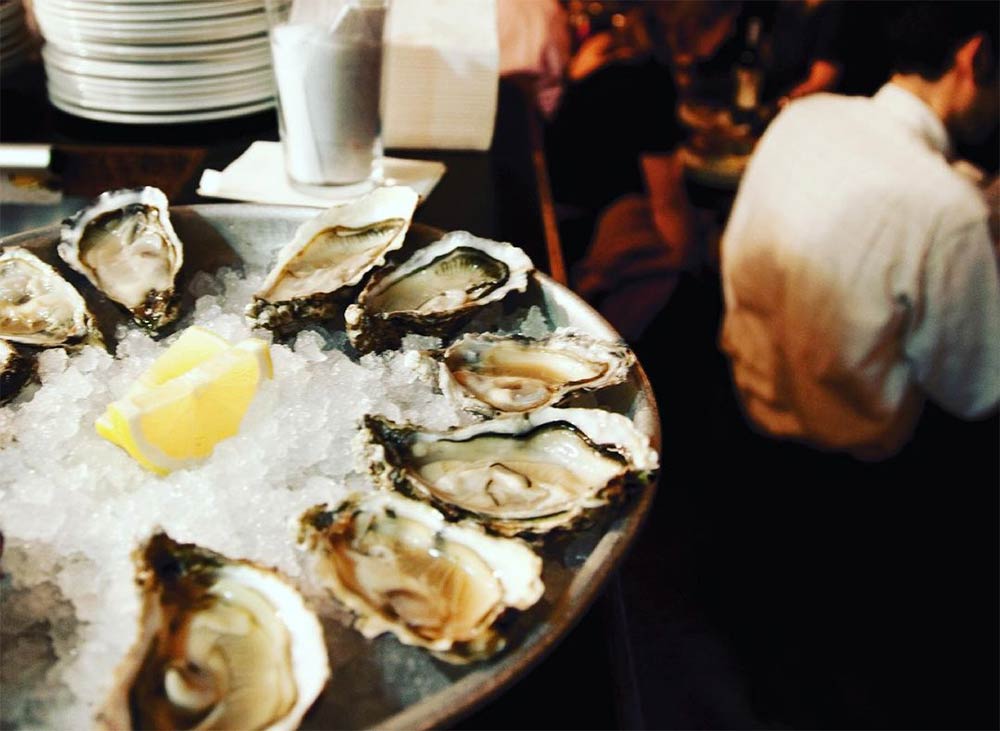 The Cow is a much-loved Notting Hill pub that only recently, much to the joy of locals. saw off an attempt by Westminster council to close it down. The plates of oysters are not to be missed or you could just treat yourself to an enormous seafood platter and a great pint of Guinness. 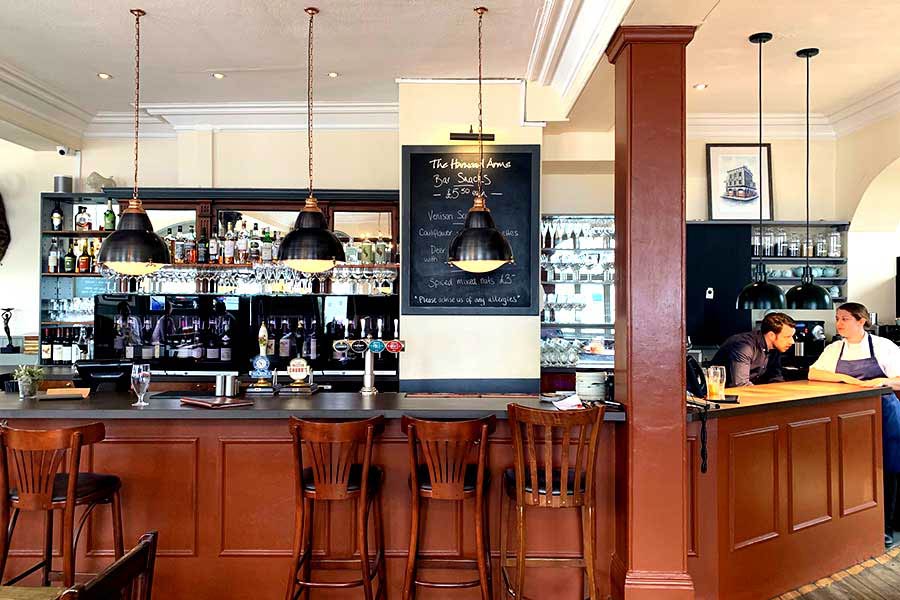 The Harwood Arms remains the only pub in London to have a Michelin star and has been home to some excellent chefs in its time, with The Ledbury's Brett Graham as its director. In the kitchen right now is ex Ledbury head chef Jake Leach. The venison scotch eggs remain a must-have.

More about The Harwood Arms 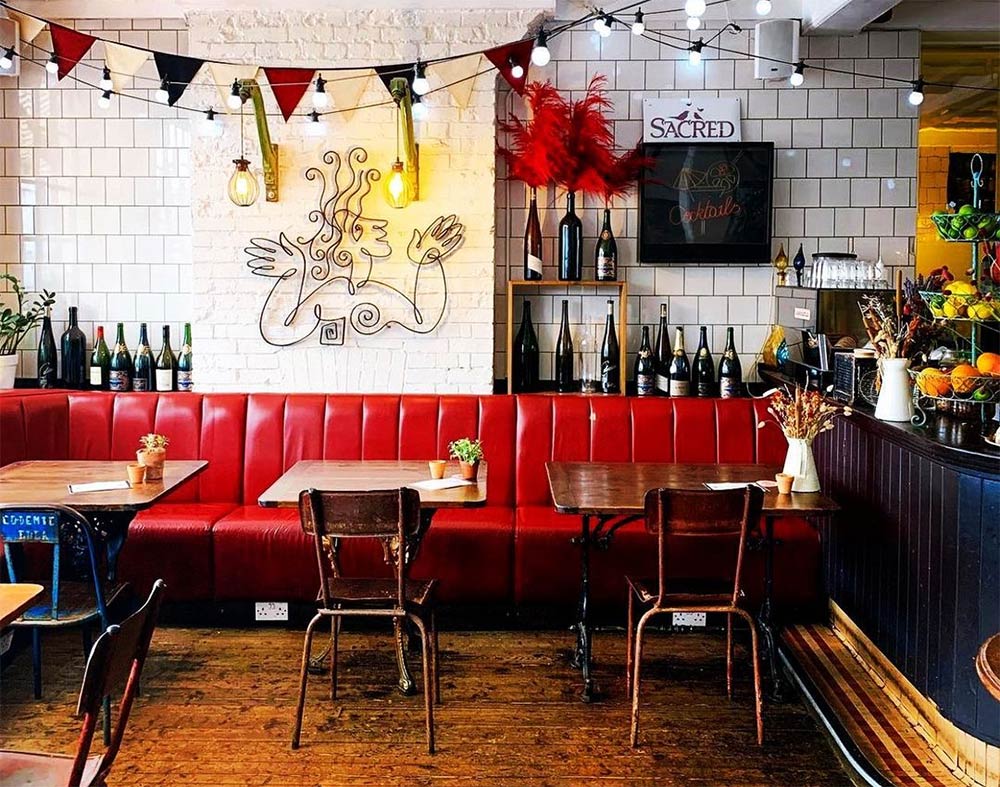 Parlour was opened by chef Jesse Dunford Wood back in 2013 and has been going strong ever since. It's probably best known for the huge Desperate Dan's Cow Pie as well as their massive Chicken Kyivs. They even have an Arctic Roll for dessert.

The Prince (West Brompton) - A pub with a huge outside space and with four restaurants in charge of the food.

Thomas Cubitt (Belgravia) - Cubitt House have a number of foodie pubs, this is their flagship. 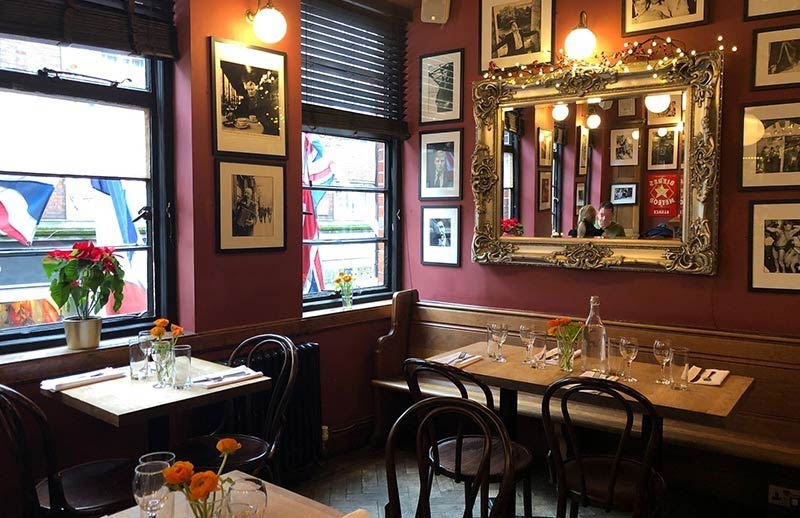 The French House has a history of showcasing excellent chefs in its tiny upstairs dining room, and that's definitely the case today with Neil Borthwick in the kitchen. Here you can expect classic French bistro food served with love and care. Make sure to leave room for the amazing Paris Brest.

More about The French House 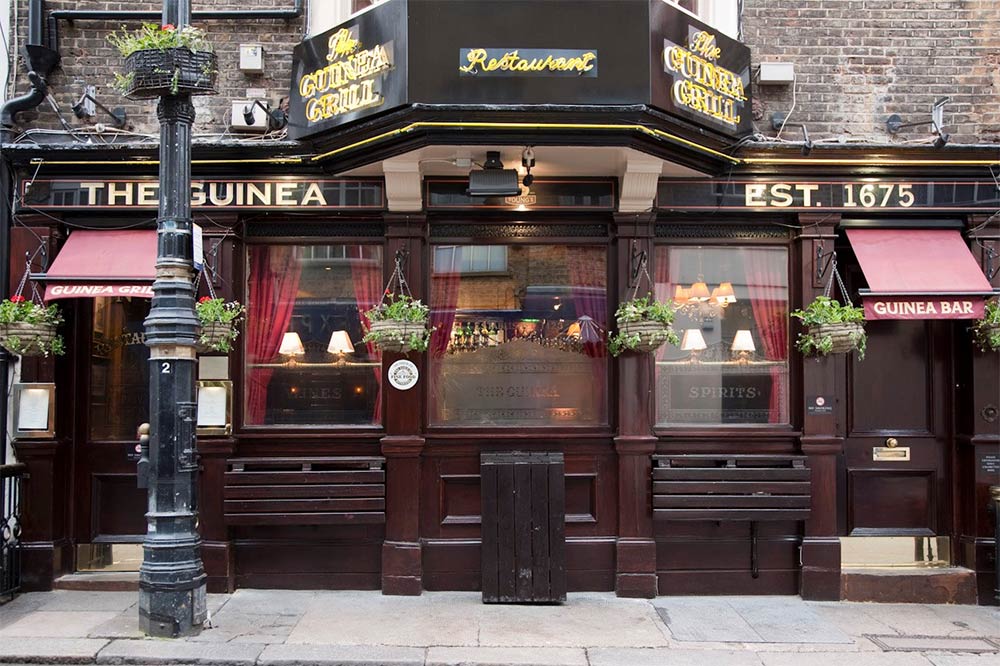 Mayfair's Guinea Grill has had something of a resurgence in recent years, regaining its crown as one of London's best steak restaurants (as well as expanding across the road in a pop-up). The bar snacks are well worth checking out, particularly the excellent scotch eggs and you'll also find one of London's best pints of Guinness here.

More about The Guinea Grill 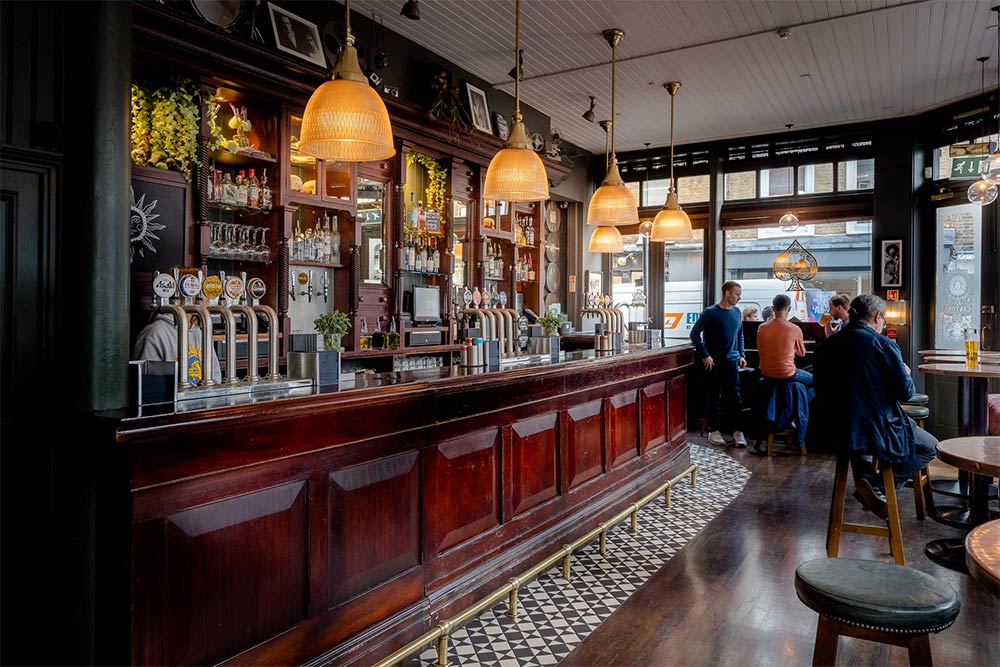 This pub plays host to a rotating roster of chefs and pop-ups with now big-name chefs like Asma Khan making their debut here. The quality continues with each well-chosen residency - at the time of writing the highly rated Tendril are there with a primarily plant-based menu.

More about The Sun & 13 Cantons 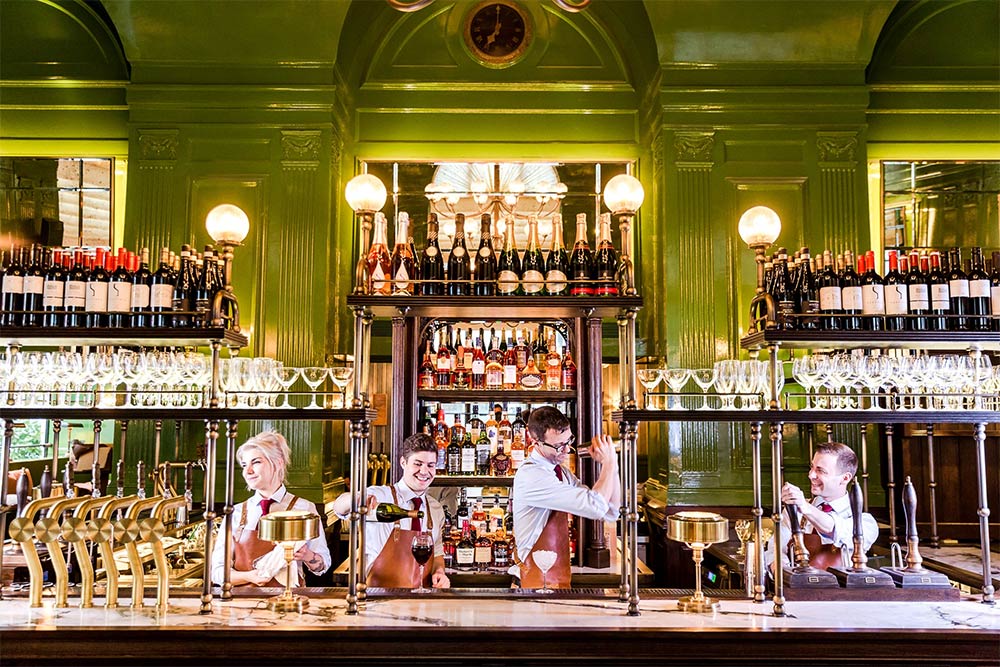 The Wigmore is attached to fancy Marylebone hotel The Langham, but acts as its own venue and remains one of the best pubs in the immediate area. The menu is overseen by Michel Roux Jr, with his take on "quintessential British pub fare".

Lore of the Land (Fitzrovia) - Better known as Guy Ritchie's pub, the food and drink are a real draw here.

And if you fancy being outside...