A guide to London's best food courts and halls

The London food scene is ever-changing and the growing popularity of upscale food halls is part of that. If you fancy eating out, but want a much broader choice than a single restaurant will allow for - these may be just what you need. We round up some of London's best.

Opened at the Tottenham Court road end of Oxford Street, Arcade Food Theatre has taken over an impressive piece of real estate at the foot of Centre Point. They've also managed to attract an impressive array of talent, many who are only have food hall/street food outlets at Arcade Food Theatre, including TaTa Eatery's Tou, Oklava and an offshoot of Flat Iron.

Who should I search out? The top draw at Arcade is definitely Tou and their katsu sandwiches, and you'll want a pide from Oklava as well.

It's further out than any of the other food halls on the list, but if you venture out to Colindale you'll find one of the UK's largest food halls. As well as being one of the first of London's upmarket food halls, Bang Bang Oriental has remained one of the most popular. Expect Pan-Asian food court specifically, with 33 kiosks in total (and seating for 450), the space allows for a huge, diverse range in food.

Who should I search out? There's an enormous range on offer here - the roast duck and BBQ pork from Four Seasons are very popular as are the Black Manis Wings from Makatcha and the veggie specials from Indo-chinese stall Veggie Wok. 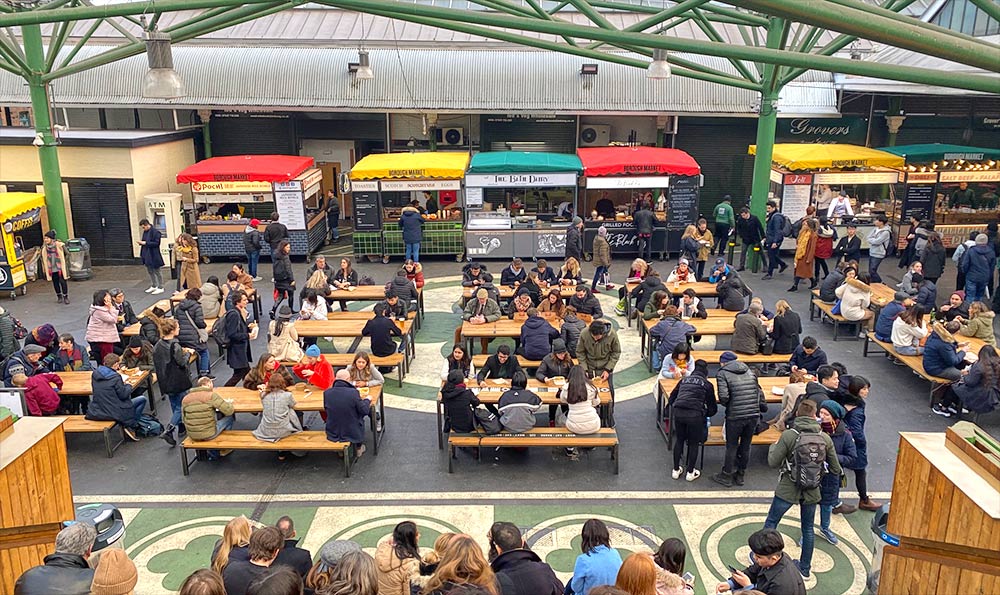 This area of Borough Market is part food court, part street food operation - it's open to the elements, but there is a permanent cover over it. As well as a collection of takeaway stalls, there are more permanent installations dotted around the Kitchen where you can perch up at a counter.

What should we search out? Top draws here are the Hainanese chicken from Mei Mei and the kubba dumplings from Juma Kitchen. 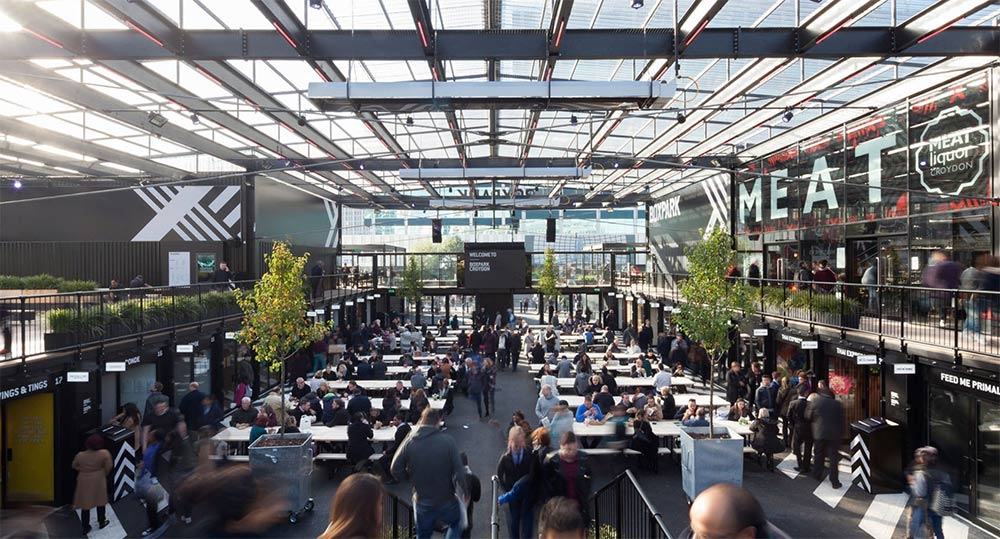 If you've only ever been to the most central Boxpark in Shoreditch - it's quite different from their behemoths at both Croydon and Wembley. There, the traders (there are 20+ at each location) surround a large communal dining area. Open all week, their events are well worth noting - from weekend parties, to screenings and Premier League events at Wembley.

What should we search out? Standouts at Wembley include Zia Lucia Pizza and Rohit Ghai's Koolcha as well as local area favourites. Croydon boasts The Breakfast Club, Coqfighter, MEATliquor and more.

Find out more about Boxpark 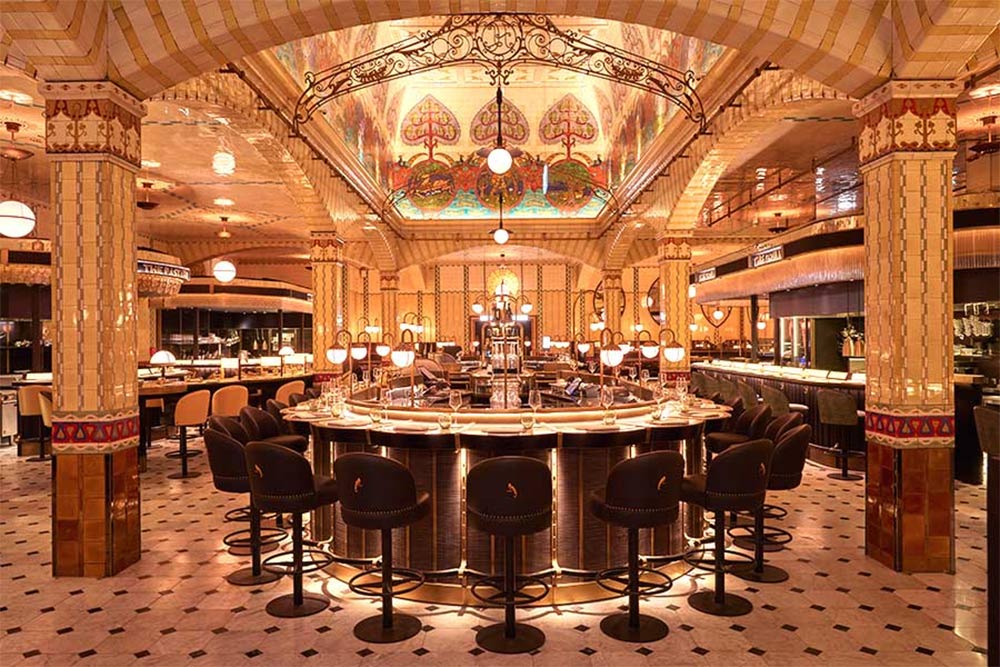 Recently renovated as part of a major overhaul of the food halls at Harrods, the Dining Hall is a mixture of spaces where you either eat at the counter you're ordering from, and some table sections where food is delivered to you. As you might expect, the space is quite beautiful and there's also the major benefit of being able to to book seats online.

What should we search out? There are six separate restaurants in total - the sushi bar (run by Eddie Lim of the Mango Tree group) is excellent and the Fish Bar's lobster toastie is definitely worth ordering. Keep room for the desserts from Kama by Vineet. 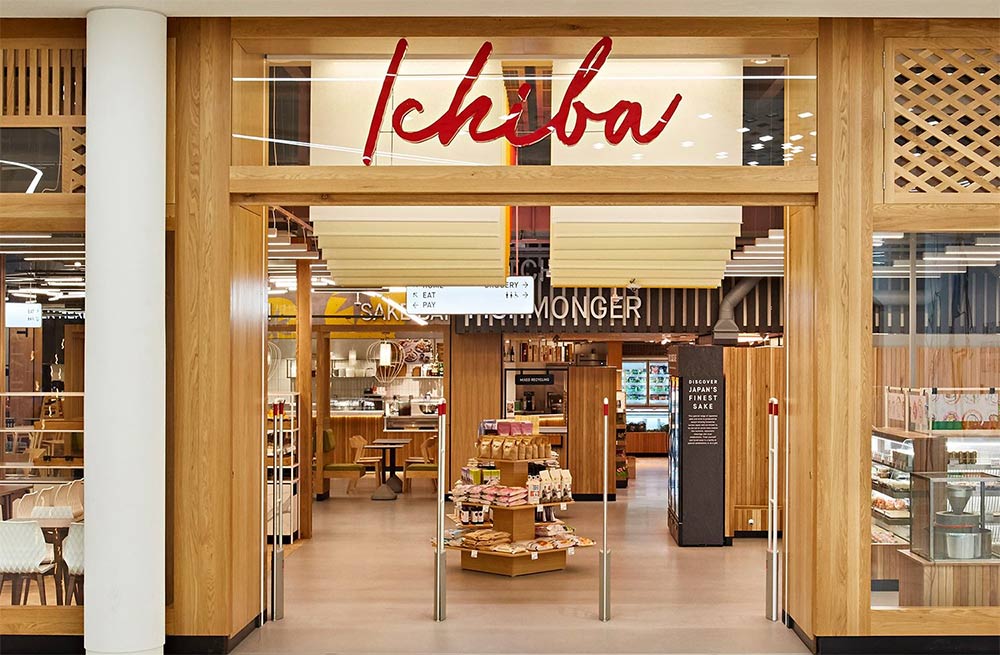 This West London Japanese food hall lives in Westfield London and is part of the Japan Centre group. As with the main Japan Centre store in central London, this features a shop along with plenty of areas for eating and drinking, with noodles, donburi and poke, yakitori, sushi and more all available. There's a bakery for dorayaki (Japanese filled pancakes) and Matcha lattes too.

What should we search out? Shoryu Ramen is probably the biggest draw and it's worth trying their offshoot Katsu and Kare.

Find out more about Ichiba 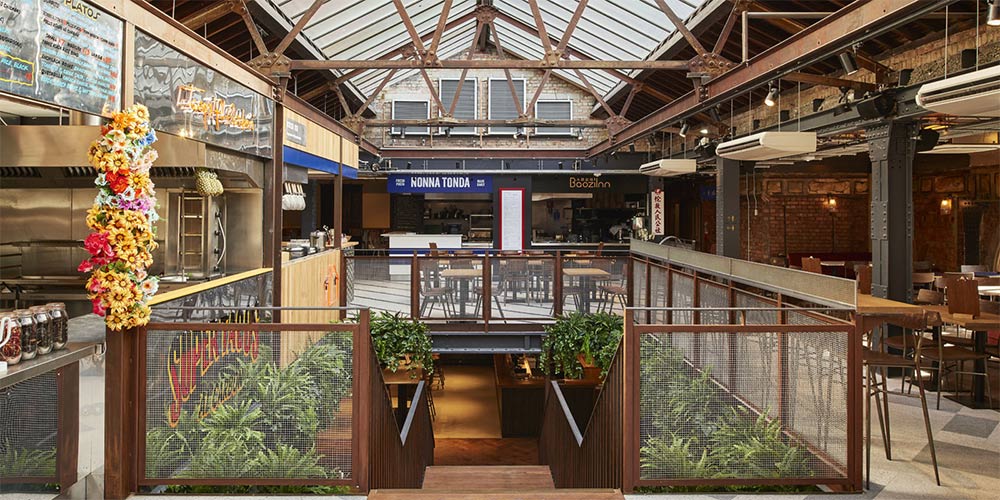 Market Halls are at the forefront of London's love affair with upmarket food halls right now. They have three halls currently - Fulham, Victoria and the largest, which is just off Oxford Street, Market Hall West End. Each of them feature between 8-11 traders, and all are in very handy positions - Victoria and Fulham are both near the stations and West End is just seconds away from the UK's busiest shopping street. Victoria also boasts a great rooftop terrace that will make you the envy of any commuters heading to catch a train at the station.

What should we search out? Gopal's Corner from Roti Chai (Victoria and West End), The Katsu sandos at Yatai (West End), Reuben sandwiches from Monty's Deli (Victoria), Pizza from Made of Dough (Fulham).

Find out more about Market Halls 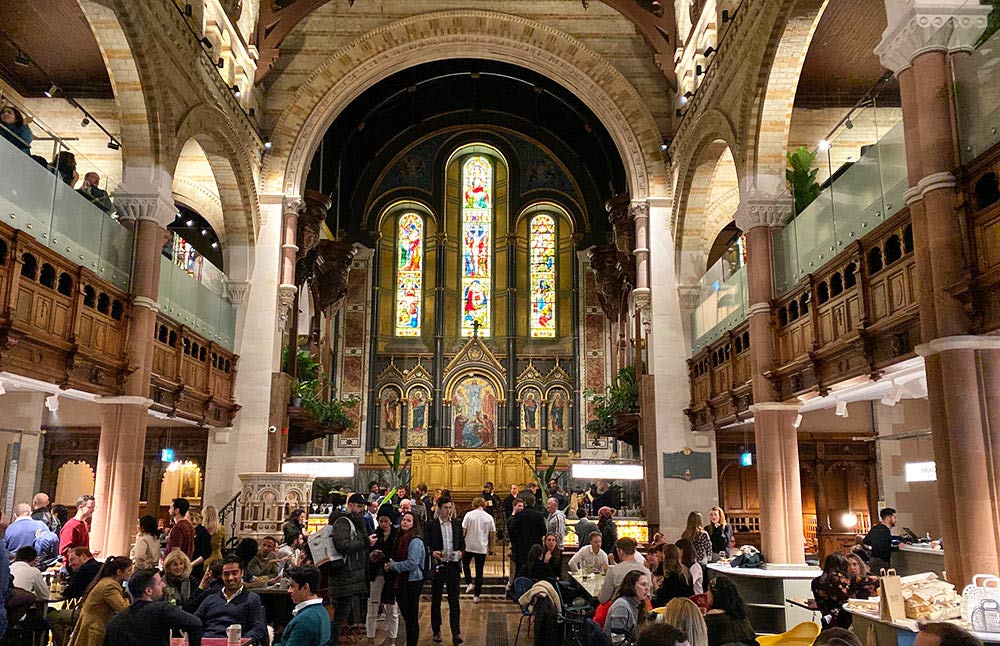 Mercato Metropolitano originally set up their first food court at Elephant and Castle - a mix of street traders, shopping and bars, with a distinct Italian flavour. That's still going strong, but they went above and beyond with Mercato Mayfair, which took over an Grade I listed and deconsecrated church between Oxford Street and Grosvenor Square. This is definitely the best-looking food hall in London, without a doubt. Again there's a focus on Italian food and drink, but there's a also a raw bar for sushi, steamed dumplings and more.

What should we search out? We were fans of The Italian Steak House here, but also really loved their wine bar which is in the actual cellar.

Find out more about Mercato Mayfair 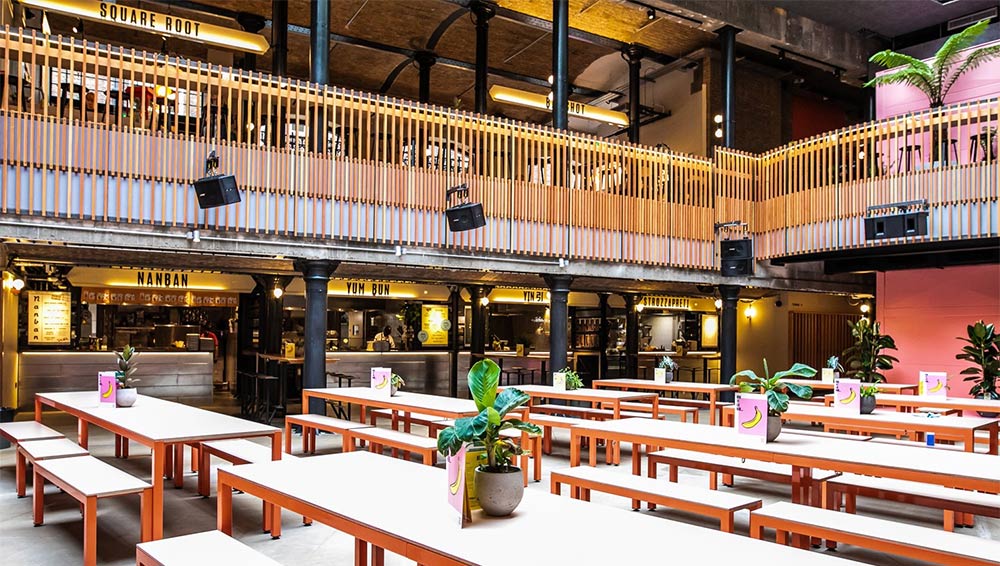 This Covent Garden food hall comes from Kerb, who have years of experience with their street food markets around London which they've translated into their first food hall. They took over the Thomas Neal’s Warehouse in Seven Dials, bringing with them some of the top traders from their Markets. The food includes shellfish from Claw, the wonderful Yum Bun's steamed buns, ramen from Nanban and more. They even have a local butcher with Roadkill and an artisan florist, The English Flowerhouse.

What should we search out? There's much to love here, but Pick & Cheese, with its cheese conveyor belt is definitely at the top of the list.