Hot Dinners Awards - the best of 2014's eating out

Is it really that time of the year again? Well without further ado, here are the movers and shakers of the London restaurant scene that proved most memorable in a hectic year of eating out for the Hot Dinners team 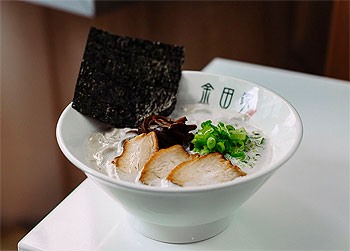 This is the year London went properly loopy for noodle. We’d already shown our devotion by thronging to the likes of Tonkotsu and Bone Daddies. 2014 was the year the Japanese woke up and headed over here to open their own ramen restaurants. Kanada-Ya opened in August, Ippudo followed in October. Around those openings, United Ramen went from pop up to permanent in Islington, Shoryu Go opened for takeaway ramen in April and Roka in Soho relaunched their downstairs bar as a ramen lunch spot. And just managing to open their doors before the year closed is Bone Daddies' second branch in Kensington.

For 2015 we could be moving in a new direction, with news that an udon restaurant is opening in King’s Cross, but it seems this city’s love for slurping is going strong.

Late runner up: lobster rolls. Over the past six weeks London has had three lobster roll spots - Smack Lobster, Fraq’s Lobster Shack and Lobster Kitchen - open their doors. And Hawksmoor Knightsbridge got in on the act too with three new lobster rolls on their bar menu. 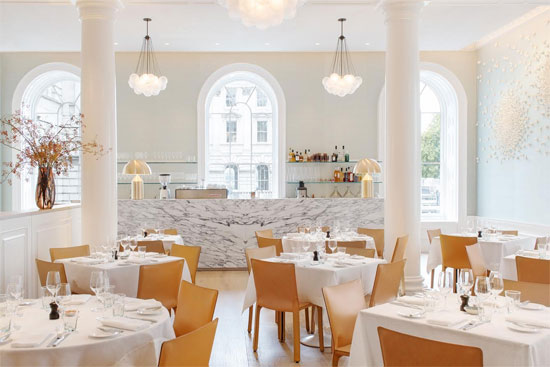 Who could have conceived that offices which were previously home to the Inland Revenue and hadn’t been open to the public for 150 years could be transformed into the modern, light-filled space that is Skye Gyngell’s new restaurant? All credit to architects Stuart Forbes Associates and interior designer Briony Fitzgerald who have turned this space in the New Wing at Somerset House into one of London’s most beautiful dining rooms. Of course it helps that the food's as pleasurable as the visual experience. 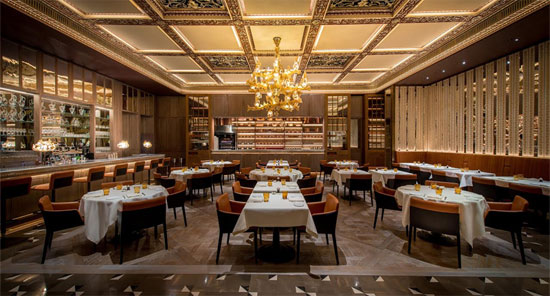 Runner up - Grill at the Dorchester

This is a jaw-dropping reinvention of a restaurant once covered in more tartan than a gathering of the clans. When you know that the designer was Parisian interior architect Bruno Moinard, whose previous projects include Hermès' Paris headquarters, the glamour of the new dining room - featuring electric wall panels which transform the room from day to night at the flick of a switch - suddenly makes perfect sense.

Read our Grill at the Dorchester Test Drive 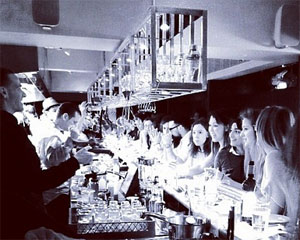 You could, of course, enjoy a lovely meal in the dining room at Palomar but that would honestly be missing the point of this madcap Jewish restaurant which injected new life into Piccadilly when it opened in May. Sit up at the bar, down shots with the chefs, and enjoy watching them hurl insults at each other, all the while serving up genuinely inventive and delicious dishes.

Palomar turned out to be a bit of a Marmite restaurant, with the polenta being the dish that divided, but we loved our meal here.

Best (way) out of town experience 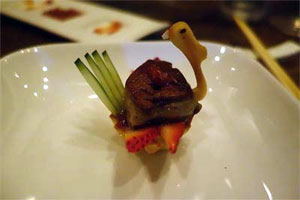 This dive bar underneath Red Farm is packed and dark (you’ll need your iPhone to read the menu) and involves either counter or communal dining, but we had one of our best meals of two trips to New York here. The Peking duck feast is their speciality. At $78 for two it includes starters, sides, duck consomme shots and memorably good duck and pancakes

Aldo Sohm had opened just days before our visit this summer. Named after its owner, the sommelier for Michelin-starred Le Bernardin which is just round the corner, it’s a wonderfully welcoming but also inspiring place to enjoy good wine.

Read all about our New York trip 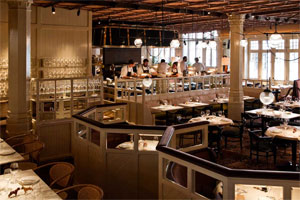 If it weren’t for the fact that living here puts them in the richest 1% of the country, one might feel sorry for residents of Chiltern Street who woke up one morning to discover that the city’s biggest celebrity magnet had opened up on their hitherto quiet, neighbourhood doorstep.

Easily (and instantly) one of London’s new starry hangouts, the chef at the middle of this maelstrom could have been overlooked. If, that is, the chef wasn’t Nuno Mendes who manages to make his food every bit as worthy of flashbulbs as his A-list diners. 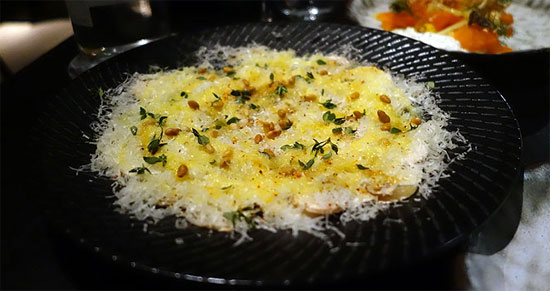 You might be surprised, given how much of our Twitter feed is devoted to steak and burgers to find a vegetarian dish holding the year's highest accolade. But the shaved mushrooms with pine nuts, Idiazábal cheese and brown butter vinaigrette at Sea Container was the business. It’s six weeks since we ate this dish and we’re still thinking about it. We weren’t huge fans of the dining room here, but we may have to go back just to eat this again.

These crispy foie-gras stuffed quail with a PX reduction "little meat lollies with an eggshell of Pedro Ximénez to dip into" were among many highlights on the menu here. 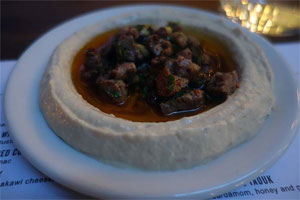 What makes hummus "dirty", you may be wondering? Well, create a dip in a circle of hummus and fill it with nuggets of Herdwick lamb fillets in a pool of nut-brown ghee. Yes that’ll do it. As good as it sounds.

An instant favourite. So delicious and a generous portion for £5.50. Read our Ivy Market Grill Test Drive 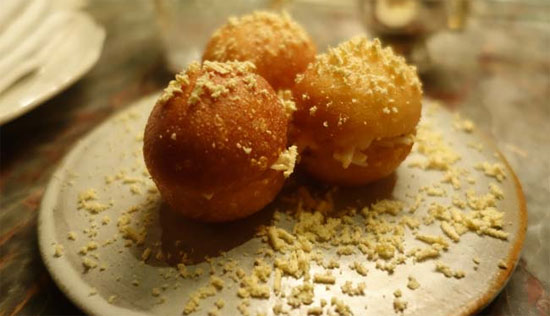 These three brioche-style savoury doughnuts took over our Instagram feed when Chiltern opened in February. Of course, everyone was being too cool to snap the celebrity eating it at the table beside them, so the doughnuts sufficed instead. 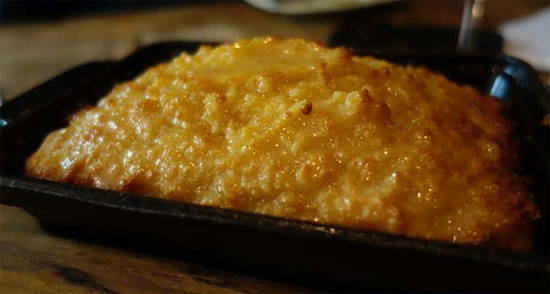 Runner up: cornbread at Lockhart.

A side dish “so good in its buttery-sweet badness that it could start its own overfed cult,” said Metro reviewer Joe Warwick. We concur. 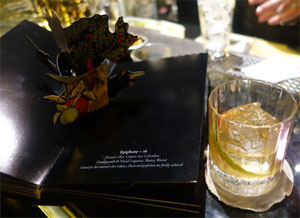 The pre-dinner cocktail scene goes from strength to strength in London with restaurateurs across town upping their game. Two of our favourite cocktails were miniatures - the three sip cocktails at £4.50 a pop at Mission and the Three Martini Lunch at Ivy Market Grill.

But we have to make a special mention for the beautiful pop-up cocktail menu at The Savoy’s Beaufort Bar. If you’re already making plans for Valentine’s Day their Impressionist cocktail with its own rose-scented mist would win anyone over.

Place we’re most embarrassed about not getting around to trying 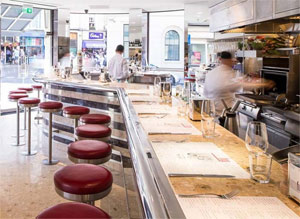 The Hart Brothers’ latest opening scored a perfect 10 for most critics, but we just haven’t found the time either to go super early at lunch to beat the queue or, bite the bullet and wait our turn in the evenings. We know, it’s our loss. And one we plan to rectify soon.

Find out more about Barrafina 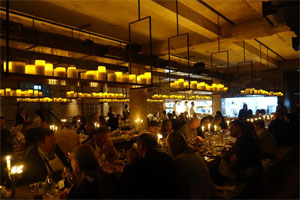 “So we’re going to do this restaurant, selling only king crab and steak as part of a £75 set menu and serve in a dining room that’s part Hogwarts, part luxe version of the workhouse opening scene in Oliver! You won’t be able to hear anyone who sits opposite you because the tables are too wide, but hey, there’s going to be a massive quarter wheel of Parmesan for you to hack at, oh and a very punchy wine list.”

Naturally Beast is a massive success and we hear that it’s got a crazy late evening scene. Truly proof that there’s something for everyone on the London restaurant scene. 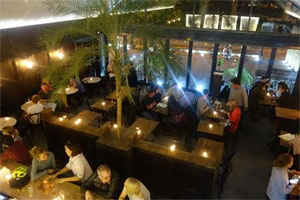 Great cocktails? Check. Beautiful dining room that doesn’t look a thing like anywhere else in London? Check. An interesting mixture of folk eating here - from City suits to East London’s hipper denizens? Check. Mission, the second opening from the hugely influential husband-wife duo of  Michael and Charlotte Sager-Wilde, has all this and a great Californian-infuenced menu by James de Jong. Throw one of London’s most exciting wine lists into the mix and you have a restaurant that really covers all the bases, expertly.

Most enjoyable eating out experience 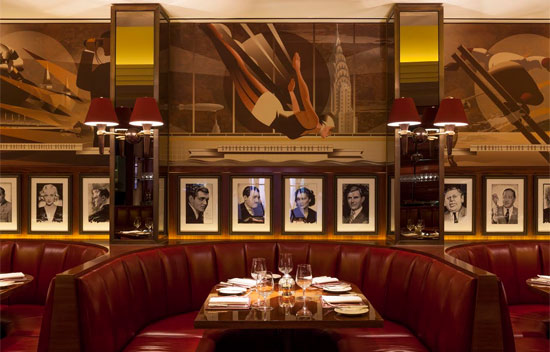 We hope that Jeremy King and Chris Corbin won’t mind us saying that while we’ve had plenty of enjoyable meals at their restaurants before, there wasn’t one that crept under our skin in quite the way that The Colony Grill Room has.

Maybe it’s down to how much we like The American Bar here with its £10.50 Martinis or insanely good value house wines, cheery bar staff and the great people watching opportunities it affords. Or perhaps it’s the fact that the dining room has achieved that near-perfect balance of buzz and bonhomie.

Of course it’s entirely possible that we just love the food which is a great mixture of grill room classics and dishes you’ve never heard of before - a recent dinner featured Veal Pojarski (turned out to be chopped veal, formed into an escalope and breadcrumbed). And that’s before you put the bespoke ice cream sundae ordering system into the mix. It’s the restaurant we’ve been back to most this year, speaking volumes about how much we’ve enjoyed it.

What our writers thought...

Of course, it's not just about what we think. We also asked Hot Dinners writers what their favourite restaurants of the year were:

Louis Fernando: "When you're dining at Mission you're transported somewhere else (Southern California?) and you feel like you're anywhere but a railway arch. The winelist is unbeatable, the service very friendly and the food, constantly improving. I can't wait to get back there in 2015."

Joel Porter: "Hardly an original choice but Barrafina Adelaide Street was easily my favourite meal of the year. My first visit there was so good, I went back again the week after and between the two tried a good proportion of the menu. Beautiful produce cooked simply is the order of the day and memorable highlights include suckling pig, herb crusted rabbit shoulder, and crab croquetas, not to mention the epic carabineros from the specials board. Sitting up at the counter, chatting to the amazing staff and watching the dishes being prepared is all part of the Barrafina experience too. Yes, you will most likely have to queue and it’s not exactly cheap but sink a couple of glasses of cava while you wait and squeeze on to the counter for some of the best Spanish food in town."

Sophie Brown: Hook in Camden offers an alternative twist on classic fish and chips. There's a mouth-watering selection of sustainably-caught fish in either tempura batter or panko breadcrumbs, with a delicious array of sauces, ranging from jerk to lemon and fennel. The staff are passionate and knowledgable and the restaurant's vibe is cool, contemporary and relaxed. Plus, the Camden Town location offers plenty of great pubs to stop at on the way from the tube.

And now we want to hear from you...

You've read our choices for 2014 - now we want to know what your favourite new restaurant of 2014 was. Checkout our exhaustive guide to new openings and then cast your vote here - and you might also win a bottle of fizz.