All through 2012 literary buffs (and tourism marketing chiefs) are celebrating the 200th anniversary of Charles Dickens birthday. As a homage to the author, we've picked out five London restaurants associated with Dickens for you to celebrate in...

The best place to go to drink in Dickens' London 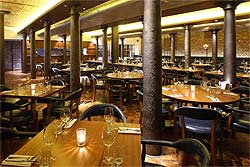 In his essay Seven Dials, Dickens painted a picture of a very different London to the trendy Covent Garden spot it is today: "The streets and courts dart in all directions, until they are lost in the unwholesome vapour which hangs over the house-tops, and renders the dirty perspective uncertain and confined."

The only vapours we'd now recommend you inhaling are that of the roasting meats at Hawksmoor. As for drinks, have a Dr Dixon made with Dixon’s Double Diamond Port, a fortified wine "that won high praise in Charles Dickens’s Nicholas Nickleby" according to Hawksmoor's drinks menu.

A little bit of Little Dorrit 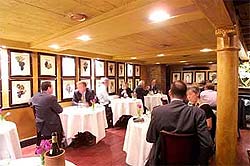 Dickens picked Bleeding Heart Yard for a home for the Plornish family in Little Dorrit describing it as "a place much changed in feature and in fortune, yet with some relish of ancient greatness about it...inhabited by poor people, who set up their rest among its faded glories, as Arabs of the desert pitch their tents among the fallen stones of the Pyramids."

Bleeding Heart Tavern now serves up exemplary French fare in the downstairs restaurant, but perhaps its most Dickensian dish would be something from the rotisserie - a spit roast leg of lamb or perhaps the salt beef pickle sandwich. 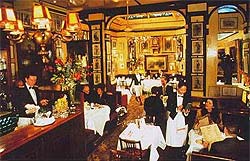 One of London's oldest restaurants, Rules has a direct dining link with Dickens as it was one of his favorite places to eat. So much so, that the author had a regularly reserved table here which, in a twist that he must have enjoyed, overlooked the blacking factory where he'd once slaved away in.

Pretty much everything on the menu here would have been eaten in Dickens' day - but how about starting with oysters, then the jugged hare finishing up with any one of their gutbusting steamed sponges. If you want to go all out, hire the Charles Dickens private dining room for a night to remember. 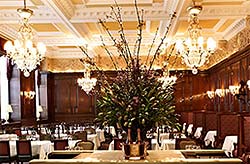 Simpsons in the Strand - The Strand

It began life as a smoking venue, then a coffee house and a chess club before metamorphosising into the purveyor of huge haunches of roasted meats it is today. Dickens used to favour it for lunches and you should do the same. It was back in Dickens' day that Simpsons first brought in the practice of rolling the meats on their shining silver trolleys to your table and carving it to your order, so start by ordering faggots, then the roast beef and what else but a jam roly poly for dessert.

More about Simpsons in the Strand

The place of Dickens' first love 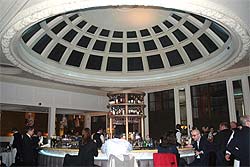 Back in the 19th century this building housed the Smith, Payne and Smith’s bank, the manager of which - George Beadnell - had a young daughter, Maria, who was Dickens' first love. It's said that the young reporter, as he was then, used to stand outside in the early hours of the morning gazing up at the bedroom windows at No 2 Lombard Street where she lived.

Our suggested dish here would be the rib of 28 day matured prime Scotch beef with claret sauce and roasted marrow bones, or alternatively make an early visit as Dickens did and come here for the grilled kippers or kidneys for breakfast.