It’s award season and everyone's in town for the BAFTAs where an influx of Hollywood’s finest arrive in town for much air-kissing, deal-making and the occasional meal out. If you're after the thrill of being seated next to film royalty any of these restaurants would do.

However none are particularly easy on the purse, so if your budget doesn’t stretch to eating here and you’d rather not gawp at the A-listers through the window (have some dignity), try their favourite drinking holes at Claridges (George Clooney's already been spotted in the lobby), the Dorchester or Guy Ritchie-owned Punchbowl pub in Mayfair. 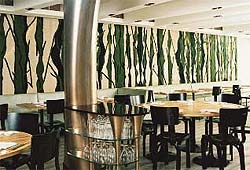 This sister establishment to the original Nobu on Park Lane attracts a younger celebrity crowd than its older sibling, although the menu is much the same with both featuring Nobu’s famous black cod. Make sure of your star spot by combining a meal here with drinks before at the May Fair Hotel bar opposite. 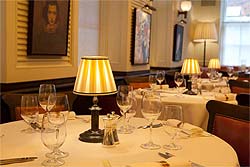 Any opening by Richard Caring of Caprice Group fame is going to attract the stars and 34 scored a blinder early on attracting Bill Clinton just after it opened (it's just around the corner from the American embassy. Stars love its comfort food, sense of style and the fact that it's one of the newer celeb haunts around town. And we rather liked it too when we went. 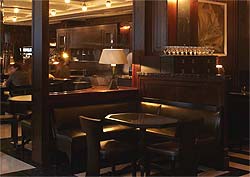 Run by Chris Corbin and Jeremy King – who are also behind The Wolseley (one of London's other huge celeb-cluster restaurants), The Delaunay has been an A-list venue since day one. The best – and cheapest – time to eat alongside a celebrity is breakfast time. But book well ahead – it can be a nightmare getting a table unless you’ve got one of those handy concierge services at your disposal.

More about The Delaunay

Situated on a quiet alley just off Charing Cross Road – this famous fish restaurant is a favourite for actors appearing on the London stage. Here they know they’ll be welcome for a late night meal after the show, while the tinted windows mean total privacy for anyone dining, be they A-list or just regular Joes. 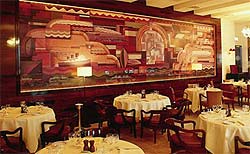 Much favoured by the music crowd in particular, this London Italian is something of an acquired taste. The staff have a reputation for being almost as snooty as the customers, so it probably helps if you’re either famous or have a private income to eat here. It’s overpriced and elitist – hmmn, we wonder why the rich and famous love it so? 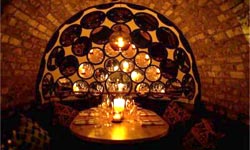 This joint venture between New Yorker Serge Becker and Will Ricker was always going to be a starry venture and from day one it's been like catnip to both local and international celebrities. They all love the idea it's hidden beneath a sex shop and while there's some cribbing about the food, there's no doubting this place's popularity - just trying getting a table at short notice at the weekend if you're a mere mortal.

And also... other restaurants you're likely to star spot in, include any of Mark Hix's places, although Soho's probably your best bet at the moment, Novikov in Mayfair and The Wolseley. Dean St Townhouse usually throws a pre-BAFTA party and it might be worth seeing if anything's happening over at the soon-to-open Balthazar in Covent Garden.

If you want to know where the stars will turn up next, view London's upcoming and latest restaurant openings.