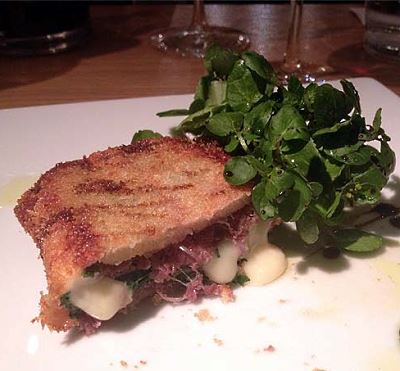 We may have become a nation of desk-troughers, but that's no excuse for some of the dismal sandwiches Londoners routinely put up with at lunchtimes. The sandwich may have been named after a man who was too lazy to leave his game of cards to eat, but that doesn't mean we should all put up with whatever rubbish is the easiest and fastest thing to eat over our keyboards.

Hot Dinners has rootled out some great London sandwiches in celebration of National Sandwich Week (12-19 May 2013) to entice you out of the office, all of which demonstrate just what culinary heaven can be achieved between two slices of bread if you know where to look for it.

A veritable steal as far as top restaurant sarnies go, this deep-fried beauty (pictured) features wind dried beef, swiss chard and Galician cheese. It's not the biggest in the world, so if you're trying it with others you'll need one each. Better still, it comes with some watercress on the side to make you feel better about all that oil and melted cheese.

Find out more about Fino

Inspired by the lobster rolls Hawksmoor owners Will and Huw ate in Maine, this little beauty is a whole grilled lobster, oozing garlic butter in a soft toasted bun with Béarnaise on the side. It's available at both Hawksmoor Guildhall and Seven Dials. Alternatively if that's too much for your budget, opt for the Short-Rib French Dip at just £12 stuffed with braised beef short-rib with Gubbeen & English mustard and bone marrow gravy for dipping. that's available in all their bars.

Find out more about Hawksmoor

This legendary steak sandwich was one of the founding dishes of Britain's gastropub movement. It's a Mediterranean spin on a British classic with marinated sliced rump steak on a Portuguese carcacas roll.

This mouthwatering combo of crispy katsu in soft white bread with shredded cabbage, tonkatsu sauce & mustard mayo has been eulogised by foodies all over London. It's deservedly a best-seller at Tsuru's city branches in Bankside and Bishopsgate.

Find out more about Tsuru Sushi

Jeremy Lee brought this fabulous combo with him when he moved from the Blueprint Cafe to Quo Vadis. And it certainly did the trick, bringing hordes of foodies determined to try this slab of smoky goodness teetering between two slices of charred sourdough and slathered with horseradish cream.

Find out more about  Quo Vadis

The early bird catches the worm, or in this case London's best bacon buttie which is only served between 9 and 11am. What makes this porcine delight stand out is that the bread and ketchup is St John's own - of course it helps that the bacon's pretty marvellous too. The ultimate hangover-crusher.

Well who said the best sandwiches have to be savoury? This heavenly combination features vanilla ice-cream sandwiched by toasted brioche, covered in butterscotch sauce and cinnamon sugar. It's so good, that when the restaurant was recently closed due for a day, they had punters banging on the windows claiming they'd crossed town just to taste this great dessert.

Find out more about Gail's Kitchen

The classic Kêu Sandwich Banh Mi at Kêu on Old Street with spiced belly of Pork, Ham Terrine and Chicken Liver pate and the grilled cheese sandwich at Kappasein in Bermondsey.